As for said “Legion,” if you’re thinking this right now… 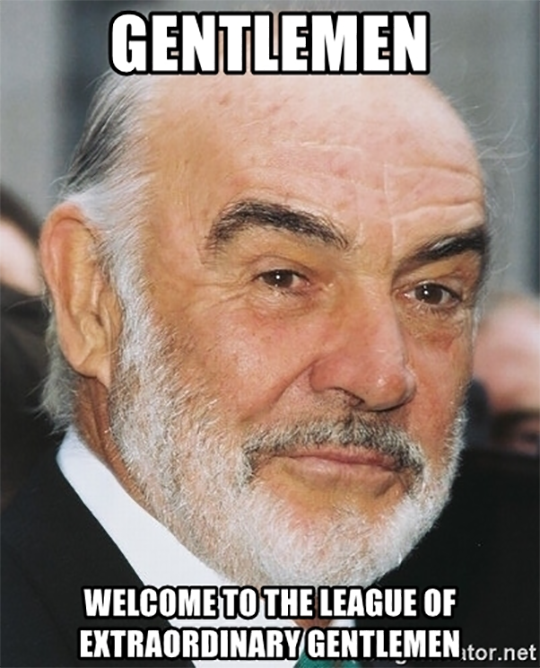 Instead of a collective of misfit comic-book heroes, according to website Yang 2020, the 44-year-old entrepreneur plans to “channel” 10% of the federal military budget — about $60 billion — to “[keep] our country strong by making sure our bridges, roads, power grid, levies, dams and infrastructure are up-to-date, sound and secure.”

Builders? Check. About those Destroyers…

“[The Legion] would also be able to clear derelict buildings and structures that cause urban blight in many of our communities and respond to natural disasters,” says the website.

Last (and we think a touch alarming): “The Commander of the Legion would have the ability to overrule local regulations and ordinances to ensure that projects are started and completed promptly and effectively.”

(On second thought, maybe Yang’s platform is ripped from the pages of a comic book.)

While Yang’s ideas might sound far-fetched, they’re gaining momentum — and not just with his fanboys nicknamed the “Yang Gang.”

Back to UBI (or what Yang calls “Freedom Dividends”): We went on record in April saying UBI might have more to do with Silicon Valley guilt than anything else…

“The way Yang sees it,” our tech expert Ray Blanco said at the time, “he’s going to get the country ready for the ‘AI apocalypse’ — when new technologies like robots and artificial intelligence… destroy millions of jobs.”

Ray, however, believes: “Rather than doom and gloom, new technologies like robotics, AI, 5G and more might usher in a golden age of economic growth.”

For proof, Ray points to the earliest days of the Industrial Revolution when novel innovation was met with similar what-about-the-jobs hand-wringing.

With the benefit of hindsight, we know that on the other side of the Industrial Revolution’s technology disruption was more work to be done than ever before.

Now, in Ray’s effort to get a pulse on life after AI, he looks no further than a personal hero…

Ray says: “George Gilder has seen a clear picture of the future when others had only questions.

“The personal computer. The microchip. The internet. The smartphone…

“George Gilder’s knowledge and vision have been a guiding light to me for years,” he says. “I have relied on and trusted his research above nearly anyone else’s.”

More on George’s legendary ability to think ahead: He wrote bestseller Life After Television in 1990 — the same year the World Wide Web was invented.

George envisioned the end of network television in favor of computers, digital video and fiber optics. And well before there was even the language for it, he predicted the smartphone (“teleputers”) and the ascendency of the internet (“channels of information”).

Today we’re living in the age of streaming, when Netflix is one of the most substantive tech companies around — something George projected almost 30 years ago.

[Note: Adding to Gilder’s bona fides, the author of best-seller Wealth and Poverty was President Reagan’s go-to thinker on supply-side economics. Not only that, but Reagan quoted Gilder more than any other living author and granted him the Presidential award for Entrepreneurial Excellence.]

Reagan to Gilder: So what’s this about trickle-down economics?

From the advent of streaming to artificial intelligence, George debunks the “threat” of AI. “The idea that AI will somehow disrupt employment for all is absurd,” he says. “For two main reasons…”

By that, he means “to fully usurp the human mind, AI would require mastering true thought. And thought… is a product of consciousness,” says George.

“No matter how ‘humanlike’ AI appears, it’s essentially the result of massive amounts of data and statistics combined with accelerated processing speeds.”

So contrary to the latest sci-fi thriller: “Artificial intelligence being developed today will not ‘wake up’ one day and think that it’s human,” George says.

“Through history,” George says, “technologies have emerged that replaced the worst jobs — allowing human beings to do other, better things.

“It should thus render humans more employable, while at the same time generating the capital to endow new work.”

George concludes: “The productivity that AI can unlock will make each employee capable of a greater variety of functions.

“This will unleash more creativity and thus more opportunities that are better, safer and more exciting for human beings.”

George says: “Consider AI the Industrial Revolution of our generation.

“The more investment in machines during the Industrial Revolution, the more jobs emerged,” he says, “along with better pay, greater longevity and more possibilities.”

Now George is about to make another world-changing prediction with what he calls a “reboot” of the internet.

It’s already in the works… it’s being developed right now, and it will have the power to create vast fortunes for early investors.

And George is holding a special summit on July 2, at 1 p.m. EDT to explain everything.

It’s free to join for readers of The 5. All you need to do to join is click here [Clicking this link automatically adds you to our private subscriber list to receive Gilder’s Daily Prophecy as a free bonus after the Tech Profits Summit. You can read our privacy policy here, and you can opt out at any time.]

The Chicago Fed National Activity Index (CFNAI) picked up in May… and while not necessarily market-moving, it’s worth a mention.

To be clear: A zero value indicates the U.S. economy’s expanding at its average growth rate of about 2%; negative values indicate below-average growth while positives indicate above-average. And historically speaking, a three-month moving average of minus 0.7 or below? A surefire recession alarm.

“Gold futures are pushing to new highs once again this morning,” says Agora analyst Greg Guenthner, “to prices we haven’t seen since 2013.

“You don’t have to be a master chart conjurer to spot this breakout from gold’s massive five-year base,” he says. 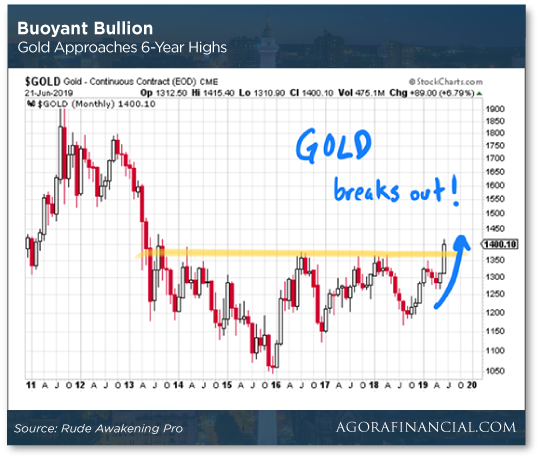 Gold’s rally — safe haven, anyone? — shouldn’t be surprising in light of the heightening war of words between the U.S., Iran… and now Russia.

At issue this go-round is the U.S.’ eastern European land missile system located near Russia’s border with Kazakhstan. The same system the U.S. might use to attack Russia’s ally Iran.

To wit, Minister Ryabkov says: “If things get as far as an actual deployment on the ground of these sorts of systems, then the situation won’t just get more complicated, it will escalate right to the limit.”

Huh… while the president continues to tighten a sanctions noose on Iran, he says: “We do not seek conflict with Iran or any other country.”

Something Ray and his team developed in-house, the Penny Pot Index keeps tabs on a collection of up-and-coming pot stocks. “Think of it like the S&P 500 index or the Dow Jones industrial average,” says Ray, “but for cannabis stocks. 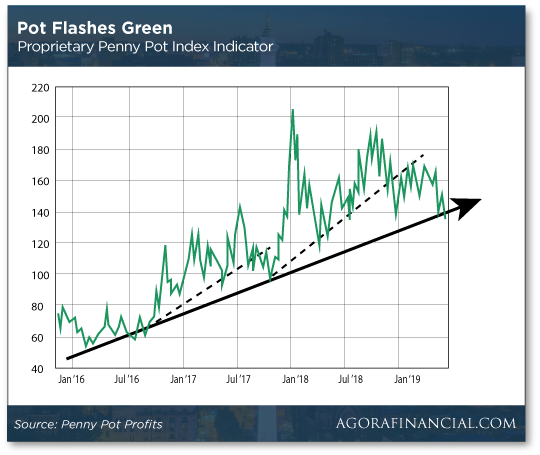 “For the first time since fall 2017, the index is touching its long-term uptrend line.”

While Ray’s noticed some short-term pops in the pot stock market — indicated by the dashed line — the trendline that counts is the solid black one.

“So far, each test of that important trendline level has resulted in a rally for pot stocks.

“Last time I pointed out that the Penny Pot Index was testing that key line… was Sept. 21, 2017,” says Ray. “Sure enough, the index doubled just three months later.

“History rarely perfectly repeats itself in the stock market,” he says, “but you’d better believe that it rhymes…

“And if the current market environment for pot stocks ends up rhyming, it could propel a huge rally in the months ahead.”

While the penny pot market’s experienced a drawn-out correction since last fall, he believes these stocks are poised to bounce.

“That’s why we’ve been opportunistically picking up beaten-down stocks along the way,” says Ray. “And we’ll continue to do just that as this bounce takes shape.”

Click here for details on how to claim it.]

FedEx does its best MC Hammer impersonation: “U Can’t Touch This.”

When writers at PC Magazine tried to ship a Chinese-made Huawei P30 phone from its London office to its New York affiliate, the phone was returned from FedEx with the following note: 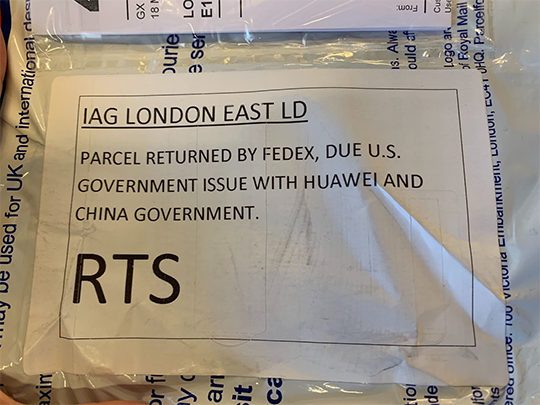 When PC Magazine looked into the matter, regional COO David Canavan at FedEx Express Europe said “a FedEx employee saw the description of the phone on the forms [PC Magazine] included, ‘had a panic attack of sorts’ and sent it back…”

FedEx — along with UPS and DHL — have since concluded it shouldn’t be an issue to send a Huawei phone from one party to another since the U.S. ban applies to doing business with “Entity List” companies (not to mention the ban’s been pushed back to August).

And this isn’t the first shipping snafu of its kind, prompting China’s state-run newspaper, Global Times, to create its own “unreliable entities list.” At the top? You got it — FedEx.

P.S. Legend has it Gilder handed Ronald Reagan the first microchip the former president had ever seen. He told Reagan that this chip would change the world.

But today Gilder is coming out of retirement to make his most surprising prediction yet.

He’s announcing this ground-shaking announcement on July 2, at 1 p.m. EDT. And because you’re a 5 Min. Forecast reader, you can get access for free.

All you need to do to join is click here. [Clicking this link automatically adds you to our private subscriber list to receive Gilder’s Daily Prophecy as a free bonus after the Tech Profits Summit. You can read our privacy policy here, and you can opt out at any time.]