So let’s see if we’ve got this right. If The 5 Min. Forecast had a Twitter account, we could be banned if we posted a picture of this book cover — which we’ve shared in these daily missives more than once… 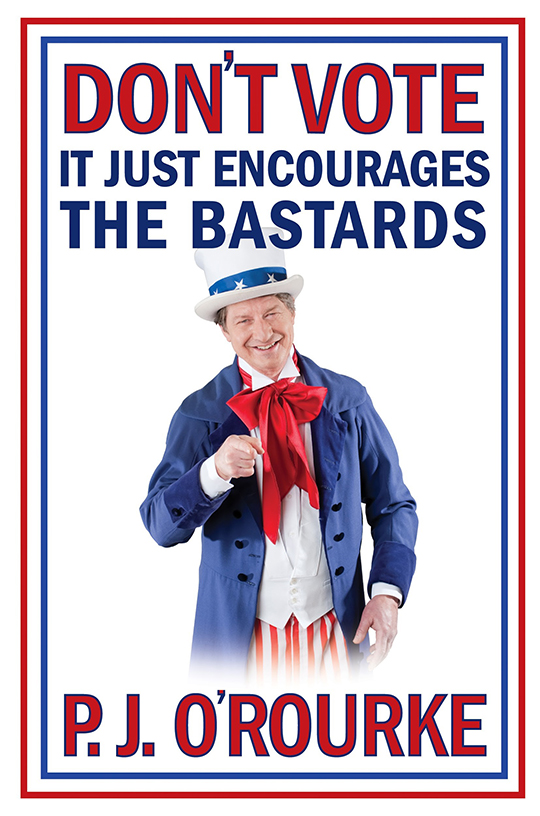 I mean, really, how else would you interpret this? 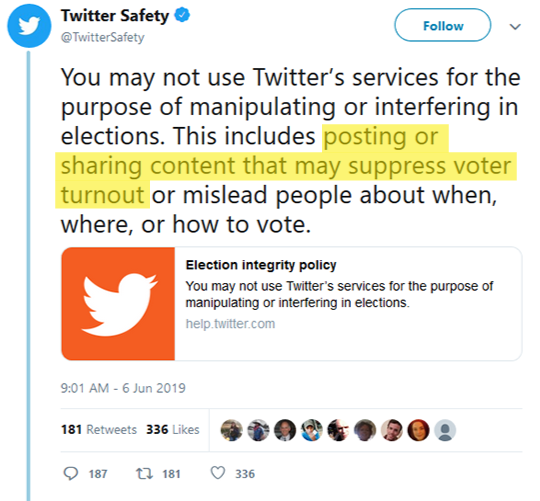 Twitter issued this guideline along with a couple dozen others on Thursday… around the same time a Twitter dust-up morphed into a fiasco that prompted a different social media giant to make up arbitrary new rules on the fly.

Until last week your editor had never heard of either Steven Crowder or Carlos Maza.

Crowder is an unfunny right-wing troll who posts a lot of YouTube videos. Maza is a pious liberal troll who has a video platform at Vox, one of the biggest names in the “digital media” realm.

Maza is open about his sexuality and posts under the Twitter handle @gaywonk. Crowder regularly mocked him on YouTube. Last week on Twitter, Maza issued what he called a “cry for help” and accused YouTube of failing to “protect” him.

“Why Maza, a 30-something adult journalist employed by a major media corporation, should require ‘protection’ of this sort was never fully elaborated,” writes Michael Tracey at The Spectator.

After an initial investigation, YouTube determined Crowder’s videos didn’t cross any of its red lines. That sent Maza into full-on meltdown mode, joined by some of his fellow cool-kid digital media types.

Within 24 hours, the YouTube hall monitors changed their minds… and barred Crowder from monetizing his videos with advertising. YouTube also issued new policies retroactively putting him in the doghouse for somehow causing “widespread harm to the YouTube community.”

The policies are so arbitrary that by Friday, dozens of people who have nothing to do with “hate” suddenly found themselves de-monetized or outright banned.

That included historians whose YouTube accounts specialize in old film clips from Nazi Germany. It also included present-day clips chronicling neo-Nazi marches in this country, recorded by a journalist whose work has shown up in dozens of documentaries for the likes of PBS.

In some cases, YouTube — a unit of Google since 2006 — has reversed these calls and made things right. But that’s not the point. The damage is done. The new YouTube guidelines were accompanied by a blogpost doubling down on the company’s commitment to “tackle hate.”

“Whatever the hell that means,” Mr. Tracey writes at The Spectator.

More from Tracey: “Part of their hate-tackling initiative now includes ‘partnering closely with lawmakers’ to combat ‘extremism,’ a concept so fluid that it defies any coherent description, as well as ‘raising up authoritative voices,’ which essentially means giving precedence to established corporate media and snuffing out the little guy.”

Exactly. This is the phenomenon we identified 10 months ago after Alex Jones was “de-platformed” by several of the internet giants. Lawmakers threaten to bring down the regulatory hammer on these companies. The companies then crack down on speech in a way designed to please the lawmakers.

It’s not hard to see where this ends — a 21st-century version of the “good old days” when most Americans are exposed to only a slender spectrum of “acceptable” opinions channeled through a handful of large media outlets.

Late last year, Barack Obama pined for these days during a speech at Rice University: “In 1981, your news cycle was still governed by the stories that were going to be filed by the AP, The Washington Post, maybe The New York Times and the three broadcast stations. Whether people got their news from Walter Cronkite or David Brinkley, they tended to agree on a common set of facts. That set a baseline around which both parties had to adapt and respond to.”

We’re already getting a whiff of what this new-old world looks like with the way a major D.C. scoop is being buried right now.

A story published last Thursday by The Hill asserts that one of the key figures in the Mueller “Russiagate” investigation was not a cutout for the Russians… but an informant for the U.S. State Department.

He’s a Russian-Ukrainian dual citizen named Konstantin Kilimnik. He worked for Paul Manafort before and during the time Manafort was Donald Trump’s campaign manager. The Mueller report “assessed” that Kilimnik had “ties to Russian intelligence.”

But according to the story bylined by John Solomon, Kilimnik was on the State Department payroll from at least 2013–16 — an informant diplomats thought so valuable they took pains to keep his name out of their cables. The article further says Mueller became aware of this fact last year while his investigation was still wide open.

“If Kilimnik was that regular and important a U.S. government source, it would deal a blow to the credibility of Special Counsel Robert Mueller,” Rolling Stone writer Matt Taibbi points out.

“The Manafort-Kilimnik tale is a fundamentally different news story if Kilimnik is more of an American asset than a Russian one.”

To be sure, Solomon isn’t the most reliable reporter out there. Going back to his days with The Associated Press, he has a lengthy history of filing stories — usually making Republicans look good or Democrats look bad — that don’t always check out on closer inspection.

But this is an important story that deserves follow-up by other outlets — either to confirm its veracity or to expose it as another of Solomon’s slip-ups.

Right now neither is happening.

“It would be one thing,” Taibbi says, “if other outlets were rebutting his claims about Kilimnik, as people have with some of his other stories. But this report has attracted zero response from nonconservative media, despite the fact that Kilimnik has long been one of the most talked-about figures in the whole Russiagate drama.

“If news organizations that heavily covered Russiagate don’t at least check out this report — confirm it or refute it — few explanations other than bias will make sense… Our press sucks. There are third-world dictatorships where newspapers try harder than they do here.”

Your editor takes a keen interest in this phenomenon… as a recovering TV news producer (i.e., “gatekeeper”) of 20 years’ experience… as a lifelong student of the markets and the economy… and as a seeker of a lucrative investing strategy that can separate the news from the noise.

On that last score, I think I’ve come onto something big over the last few months. Stay tuned…

To the markets… where stocks are rising today, but under another huge cloud of “regime uncertainty.”

At last check, the Dow has pushed decisively above 26,000. The S&P 500 is three points away from 2,900. The Nasdaq is rallying the hardest, up 1.5% at 7,866. Gold and Treasuries are pulling back, but after their big gains of last week some “consolidation” is no surprise.

“For now, the market wants us to forget about the global economic slowdown fears that have rippled through the financial press for the better part of the last 12 months,” chart hound Greg Guenthner tells us. “The path of least resistance is now higher.”

The proximate event for today’s rally is news that came out after the close on Friday — that the U.S. and Mexican governments have come to terms on an immigration deal. The new tariffs on Mexican goods threatened by Donald Trump a week ago are off the table.

Or are they? The president’s tweet on Friday said the tariffs scheduled to take effect today are “indefinitely suspended.”

That means they could still hypothetically come into force if he thinks Mexico isn’t keeping up its end of the bargain, right?

The details are already looking hazy. Yesterday, Trump said as part of the deal, Mexico would make “large” purchases of U.S. farm products. But there’s no mention of such a provision in the communique issued by the two governments Friday.

At this stage, it’s a wonder any foreign government wants to strike an agreement on any subject with Washington.

The Bush administration came to an understanding with Gaddafi in Libya, and Gaddafi gave up any ambitions for nuclear weapons. But the Obama administration decided on regime change in 2011 and Gaddafi wound up dead six months later.

And of course the Obama administration came to an understanding with Iran about its nuclear program — which Trump is blowing up, again largely at the behest of John Bolton.

All we’re saying is no sensible business owner is going to make any decisions on the assumption this new U.S.-Mexico deal will have any staying power.

Nor is the Mexico agreement the only instance of regime uncertainty we see this morning.

As you’ll recall, last month the White House put the Chinese tech giant Huawei on a “blacklist” of Chinese firms prohibited from doing business with U.S. firms unless the U.S. firm gets a license.

But now the White House budget office is asking for that ban to be delayed. The request to Vice President Pence and the Congress cites what The Wall Street Journal calls “burdens on U.S. companies that use [Huawei’s] technology” and “the difficulty in ordering a quick halt to companies’ business with Huawei.”

How can a tech company make plans for the future if it doesn’t know the rules of the game?

In addition, the president threw at least a splash of cold water on the big merger-and-acquisition news of the day.

“I’m a little concerned about United Technologies and Raytheon,” he tells CNBC. “Does that make it less competitive? It’s already not competitive.”

The deal would make one of the “Big Five” defense contractors even bigger. The combined firm, which plans to keep the Raytheon name, would be No. 2 by market cap only behind Boeing. And like Boeing, it would have a big hand in the civilian aircraft sector; United Technologies owns the engine-maker Pratt & Whitney.

The only “pure play” defense and aerospace names remaining among the Big Five would be Lockheed-Martin, General Dynamics and Northrop Grumman.

From the “seemed like a good idea at the time” department, we have a McDonald’s promotion gone awry in Canada.

Seems MCD woefully underestimated the shooting prowess of the NBA’s Toronto Raptors going into the current season. The firm launched a promotion in much of eastern Canada — giving away free orders of medium fries whenever the Raptors hit at least 12 3-pointers in a game.

Turned out there were 44 such games during the regular season and another 10 during the playoffs; the Raptors made their way to the finals, where they lead the best-of-seven series over Golden State 3-1. (Game 5 is tonight.) Some fans keep count even while the games are underway…

At least one McDonald’s franchisee professes not to be worried. Mike Forman — owner of four locations in Whitby, Ontario — points out you have to download and use the McDonald’s app to claim the free fries. “We believe it will pay off in the future,” he says.

P.S. Have you seen this message from our customer care director?

It could help you grow your portfolio much faster than you thought possible… but only if you take action before midnight tonight. Learn why at this link.