What if the next recession and bear market are still several years away?

We realize that’s an odd — maybe bizarre — question to ask this morning.

An hour into the trading day, stocks continue their weeks-long slide; the S&P 500 just cracked below the major support level of 2,800. Bond yields keep tumbling, with the 10-year Treasury at a 20-month low. Traders in fed funds futures are now signaling not just one interest rate cut by the Federal Reserve this year but two.

There’s no sign the trade war will abate; indeed, millions of people were surprised this morning by headlines about China possibly cutting off America’s supply of rare earths. (You weren’t surprised if you’ve been keeping up with these daily missives.)

Morgan Stanley’s Michael Wilson — one of the few mainstream analysts who accurately forecast the stock market would fall last year — is on “recession watch,” a call that vaulted him to the main headline late yesterday at the Drudge Report. “Recent data points suggest U.S. earnings and economic risk is greater than most investors may think,” he writes.

We also realize it’s a bizarre question for us to ask.

After all, Agora Financial cut its teeth in the mid-2000s with a prescient call that the housing market was in a bubble — a notion the mainstream thought ludicrous at the time. We trace our lineage in the newsletter biz to a long and distinguished line of financial renegades often dismissed as “doom-and-gloomers.”

Here at The 5 for the last 18 months, we’ve observed the United States is in the late boom phase of the boom-bust cycle.

One reason we kept pointing that out is simply the calendar. When May becomes June at the end of this week, the current U.S. economic expansion will be entering its 11th year. That will equal the record length of the 1990s expansion.

Aren’t we just due? Aren’t all the signs there that the economy and the market are as good as they’ll get for this cycle… and it’s all downhill now?

But here’s the thing, and what’s nagging at us this morning… All the signs aren’t there.

For one thing, there’s no accelerating inflation that marks the end of a boom and the start of a bust.

It’s not for lack of trying by the Federal Reserve. The Fed has conjured an abundance of new money into existence since the Panic of 2008. But most of that money has found its way into financial assets — especially stocks and real estate.

In contrast, consumer price inflation is (relatively) muted — and in recent months it’s been falling steadily.

That’s not how it usually works at an economic peak and the start of a recession.

Think back to late 2007–early 2008. Your cost of living was rising relentlessly — so much so that the Fed and other pillars of the Establishment tried to steer public focus onto the “core” inflation rate, a figure that excluded food and energy prices and just happened to be lower than the regular inflation rate. Here in The 5 we would periodically mock the core rate as inflation for people who don’t eat or commute.

Speaking of energy prices… nearly every recession is preceded or accompanied by a huge jump in oil. That’s not happening either.

Now? Oil began rising steadily from $26 in February 2016. We fretted much of last year… all the way to the peak at $76 in October. But we haven’t come close since. Heck, for four years of this economic expansion, oil stayed above $80 — and we averted recession the whole time… 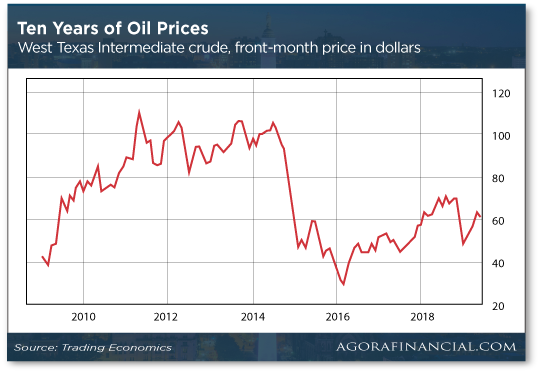 This morning a barrel of West Texas Intermediate is down another 3%, trading at $57.32 — the lowest since mid-March.

And another thing: Where’s the bubble?

The end stage of an economic boom is usually accompanied by a glaring bubble, a euphoric mania, in a single asset class where the masses convince themselves trees grow to the sky. Think housing in 2004–06 or dot-com stocks in 1999–2000. Before the 1990–91 recession it was commercial real estate financed by the savings and loans.

But where’s that bubble now? We’ve had a handful of mini-manias in recent years — shale energy in 2014, cryptocurrencies in 2017 — but nothing that’s really stoked mass consciousness.

Cannabis stocks? True, they’re going through a shakeout, as we’ve discussed from time to time this year, but the sector is way too small to have a ripple effect on the rest of the economy.

A few analysts claim the existence of an “everything bubble,” but that’s just lazy. Whether it’s tulips in Holland in the 1630s or railroads in England in the 1840s, it’s always something specific that’s got everybody talking.

Besides, a large number of mom and pop investors are still sitting out the stock market, more than 10 years after it hit bottom.

At the peak of dot-com mania in early 2000, the Gallup pollsters determined 61% of American households had money in the stock market. Going into the 2007–09 “Great Recession,” the figure was 63%.

“Bear markets are most likely to occur when participation among the public is at a maximum and short sellers are able to play off the public’s bullishness for an extended period,” newsletter veteran Clif Droke wrote recently at Seeking Alpha. “But when everyone is skeptical of stock valuations and commitments are few, downside moves in the market tend to be short-lived and quickly reversed.” 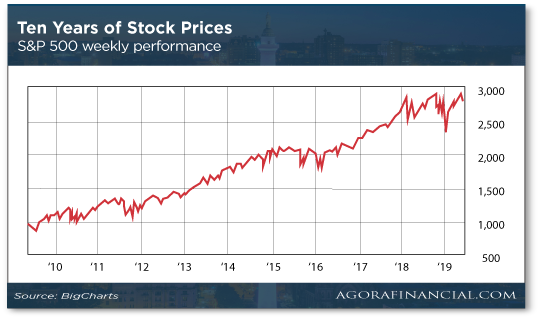 But as you can see, there was also a lot of sideways action from mid-2014–mid-2016. Likewise the market registered no gain in 2011 — and with a lot of Maalox moments along the way. Nothing moves up and to the right in a straight line. (OK, rarely — that was the story of 2017. But that’s an aberration!)

Understand, we’re not making a prediction here. We’re just sussing out how the current mainstream consensus of “mild panic” might be wrong.

And we haven’t lost sight of history: Out of a dozen or so cycles since World War II when the Federal Reserve was raising interest rates — as it did from 2015–18 — only once did the Fed pull off a “soft landing” and avoid tipping the economy into recession.

That was in 1994. Can the Fed achieve a repeat performance 25 years later? The odds are long. But for reasons we’ve laid out today, not impossible.

So what say you? We always welcome reader feedback, but we don’t usually ask for opinions about the markets and the economy — seeing as our editors have plenty of those themselves! Today, though, we want to hear your “ground truth.” Are you skittish about the market? Are businesses hiring where you live? How does now feel compared with other times in your experience?

As the day grinds on, so does the “risk-off” trade. Talk about Maalox moments.

“Sellers are in control as evidenced by yesterday’s weak close that pushed the S&P 500 to new two-month lows,” chart hound Greg Guenthner tells us. With 2,800 now a memory, “a breakdown could lead us to a test of longer-term support somewhere in the 2,700–2,750 range.”

Hot money is fleeing into the safety of Treasuries, pushing prices up and yields down. The 10-year yield stands at 2.23%, the lowest since September 2017. Alas, gold is barely benefiting from the safety trade — up barely a buck at $1,280.

Traders are also parsing a press statement from special counsel Robert Mueller at the conclusion of his “Russiagate” investigation… and whether it will settle the market’s uncertainty about events in Washington. From where we sit, it does not… 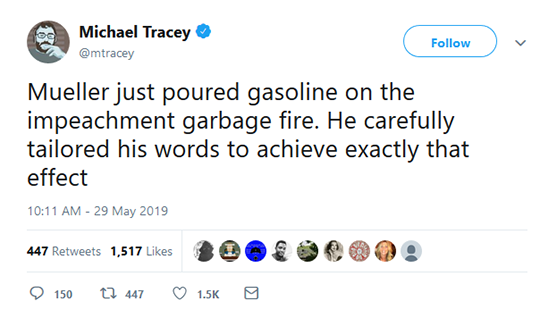 Meanwhile, for all the U.S.-China tension right now, Washington has opted not to designate Beijing a “currency manipulator.” The Treasury Department has a chance to issue such a pronouncement in a report it issues every six months. Once again, it passed. Check with us again around Thanksgiving time.

It’s been a heavy episode of The 5 today. More than usual, we could use some comic relief. Lawyers for the industrial giant Caterpillar (CAT) have obliged.

Like many coffee shops, Cat & Cloud sells T-shirts and hats. Like many Fortune 500 companies, CAT has a line of apparel. CAT is taking exception to Cat & Cloud on the ground that the latter’s apparel might cause public confusion.

The publicity is such that CAT has issued a statement: “We are not suing Cat & Cloud, not targeting a small business and not focused on Cat & Cloud’s primary interest: coffee. We’ve simply asked the U.S. Trademark Office to remove Cat & Cloud’s trademark registration on footwear and apparel only, products for which Caterpillar has longstanding trademarks and a considerable business.”

Cat & Cloud co-founder Jared Truby won’t back down, either: “Caterpillar has released a blanket statement that seems to lead people to consider that we may be negatively affecting their merchandise sales. They also fail to state that we are going to have to go to court to defend our trademark. They are attempting to cancel our trademark and therefore this is far more than a ‘cease and desist.’”

Truby says he’ll launch a GoFundMe page so he’ll have the funds to lawyer up.

On second thought, no, there’s no comic relief to be found today. Only outrage…

“Your analysis of Baltimore’s ransomware woes was interesting and enlightening,” writes a reader who lives and works in the environs of Charm City.

“The last three weeks have resembled a poorly scripted soap opera. Each day brings a breaking news story that barely reveals anything new from the previous day. The storyline remains the same: scant facts followed by innuendo with a climax of mudslinging.

“Interestingly, each time the major players are city officials with cameo appearances by federal agencies supported by a cast of thousands (of trapped city residents and taxpayers).

“It matters not what the central plot line might be, the action is all the same. From a murdered/suicidal police detective scheduled to testify in federal court to a police commissioner that plea-bargains a tax evasion case to a mayor that resigns in disgrace over questionable financial activities to this most recent ransomware attack (that some say Microsoft had already provided a preventative patch for), the outcome appears to be the same. A lack of leadership possessing the ability to lead and accept accountability for their actions.

“Even The Three Stooges didn’t have scriptwriters this talented.”

The 5: So nothing’s changed since my wife and I left a while back…

P.S. While scouring for source material as we prepared the CAT versus Cat & Cloud story, we learned that a couple of years ago CAT moved its headquarters — from its longtime home base of Peoria, Illinois, to the hoity-toity Chicago suburb of Deerfield.

Says a thing or two about how the C-suites of Corporate America are becoming more and more isolated from the front lines of their businesses, no?

CAT still has extensive operations in Peoria, but Peorians are butthurt, and understandably so. It comes through in a Peoria Journal Star story by columnist Phil Luciano: “Would any clear-thinking person — that is, anyone not ensconced in a certain front office in Deerfield, Illinois — suggest a possible consumer mix-up between the corporate giant and a little coffee shop?” Heh…