“It truly is a frustrating time for traditional savers,” says our wealth and income expert Zach Scheidt. (What? No exclamation point?)

“Thanks to the Fed’s grand experiment of cutting interest rates to zero after the financial crisis,” Zach says, “you’ve endured more than a decade of earning next to nothing on cash kept in a traditional savings account.”

Now — because of low inflation and worry about economic growth — the expectation is the Fed will actually cut interest rates further before the end of the year.

“Fortunately,” says Zach, “there are some much better options than your local bank or credit union.”

That said, Zach’s got a bead on some of “the best stocks to help jump-start the income you can get from your hard-earned savings.”

“As the name implies, REITs invest in real estate opportunities and generate profit when those investments pay off.

“And while low interest rates have played havoc on individuals with savings accounts and certificates of deposit, those same rates actually help REITs.”

“I’m especially excited about the prospects for REITs after watching how many of these stocks traded over the last couple of weeks when the market became a bit more volatile,” says Zach.

OK… more than a “bit” volatile.

“If you tuned in to the financial media on those days,” Zach continues, “you could have easily detected a sense of panic in the voices of commentators.”

(We talked yesterday about the relationship between the overcaffeinated media and stock market… so, yeah, we can just hear the panic now.)

Agitation aside, “During [those] fearful two days in the market, real estate stocks actually rose,” Zach says, “with the average REIT gaining 0.9%.

“In short, if you’ve been waiting on the sidelines for just the right moment to invest in these real estate plays, now is the time!”

With interest rates still uncommonly low — and the expectation of the Fed trimming rates lower still — “investors are looking for better opportunities to lock in steady yields from their investments.

“And that’s driving a lot of capital into the REIT industry.”

Zach says: “I want you to take advantage of this opportunity by owning shares of the best REITs the market has to offer.

“National Retail Properties (NNN) has sidestepped the carnage from Amazon’s retail dominance by focusing on locations that people visit on a near daily basis.

Think gas stations, fast-food restaurants and convenience stores. “These are the locations operated by NNN,” says Zach, and they “aren’t going away any time soon.”

Add to that National Retail Properties has raised its dividend for shareholders every year for the last 29 years, and shares currently pay a 3.8% yield.

“Digital Realty (DLR) has a bit of a different spin on the REIT concept,” Zach notes. “The company owns 198 data centers around the world and rents space for equipment used by tech customers like Oracle, Comcast and Verizon.

“With so much demand for data and computer processing power,” Zach continues, ‘I expect DLR’s business (and payouts) to grow steadily for years to come.

“Today, DLR offers investors a quarterly dividend of $1.08, up 7% from last year’s payout. That represents a 3.7% yield, which is very attractive given the current low interest rates.”

“Welltower Inc. (WELL) is the largest U.S. health care REIT,” Zach says, “owning facilities such as hospitals, clinics and nursing facilities. The company benefits from increasing demand for health care services thanks to our aging demographic.

“And in the past year, Welltower has added roughly $2.5 billion in new medical properties, which should boost payouts to investors this year.

“WELL’s $0.87 quarterly dividend adds up to a 4.3% yield,” says Zach, “and you can expect that yield to grow this year as the company increases its payout once again.”

Zach says: “There you have it… Three great real estate plays to take advantage of low interest rates and the rising demand for stable cash-generating investments.”

[Ed. note: Zach’s already shown you how to ditch low-interest savings accounts and invest in stocks that offer great income plus protection in today’s market…

But to further juice your investment income…

Discover even more opportunities to generate huge sums of money…

To the markets, where the major averages are shrugging off some of yesterday’s losses — the Dow’s crept up about 100 point to 25,598.

“Despite the recent sell-off in global equities and the escalating trade war, gold has yet to enjoy an extended rally,” say Agora analyst Greg Guenthner.

“Yesterday’s jump of a little more than $11 was the yellow metal’s biggest rally in almost two weeks,” he says. “But gold is giving back some of these gains this morning as stocks stabilize.

“As of right now, gold is just about $10 above its 2019 lows and showing little to no sign that it’s ready for an extended move higher. 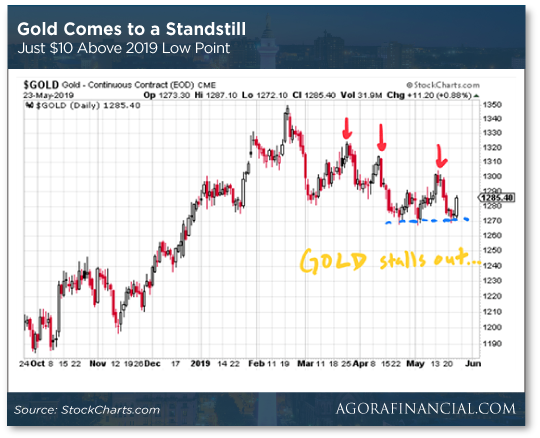 “Over the past three years,” says Greg, “gold has bounced off its lows near $1,050 and attempted several rallies that have all failed before hitting $1,400.

“In fact, it hasn’t been able to build any momentum above $1,300 since February.

“With the trade war drama monopolizing the financial headlines,” he says, “now should be the time for gold to shine. Its failure to gain any traction during these tumultuous times tells us to stay away until conditions improve.”

The Commerce Department issued its monthly report on orders for durable goods — that’s everything designed to last three years or longer, from fridges to gas generators. The number toppled 2.1% in April — weak, but not surprisingly so.

However, orders for “core capital goods” — a figure excluding aircraft and military gear — stunk up the joint, falling 0.9% last month; this after a revised March number reported at plus 1%, adjusted to an increase of just 0.3%.

“Brexit has finally brought down Theresa May,” says a headline at Vox.

British Prime Minister Theresa May has officially tendered her resignation today — effective June 7… but she will stay on until a successor is chosen. 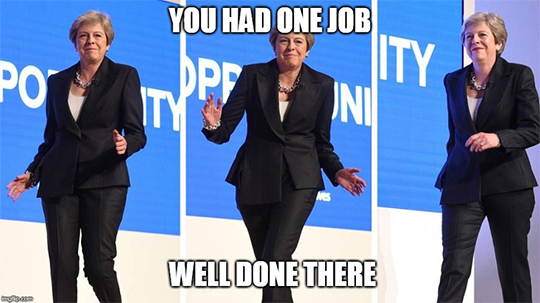 While May dances her way off the world stage, her resignation “adds even more chaos to U.K. politics as the country tries to finalize its exit from the EU,” says Vox.

For her part, in a statement outside 10 Downing Street, May said: “It is and always will remain a matter of deep regret to me that I have not been able to deliver Brexit.”

We can safely assume that it will be a matter of deep regret for her successor, too.

And whaddaya know? The pound is up today for the first time in two weeks… heh.

The House of Representatives passed the Setting Every Community Up for Retirement Enhancement Act… known as the Secure Act. It’s an acronympalooza!

The bill also includes the “stretch IRA” restrictions we spotlighted last month; at the time, the Senate had introduced its own bill — the Retirement Enhancement and Savings Act or, you got it, RESA.

“The House measure would require most nonspouse beneficiaries to withdraw the money within 10 years of the original owner’s death, while the Senate bill would require distribution within five years for accounts worth at least $400,000, unless the beneficiary is the spouse.”

One way or the other, the government wants their cut sooner rather than later…

We’ll keep an eye on the progress of the Secure Act, er, RESA — or whatever!

The Allwood Solvalla has gone viral… priced at just $7,250, the tiny house is a minimalist’s dream that includes 172 square feet of living space. (Is space the right word?) 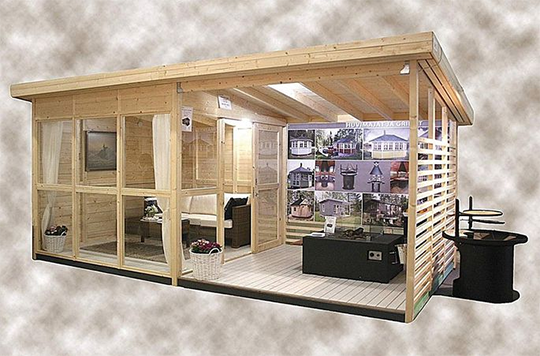 “Keep spending most our lives livin’ in a [hipster’s] paradise.”

“The manufacturer claims it can be built by two adults in eight hours, although delivery takes about three–five weeks,” the article continues.</p

“But hey, at least shipping is free — all 2,480 pounds of Nordic wood, as well as most of the other components you’ll need to put the place together.”

Know what’s not included with the tiny house? Permits. A foundation. Plumbing. Electrical… land to put it on.

And — heh — reviews ain’t good. One from “Margo” titled “Glorified Dog Kennel” jibes with what we said above:

“No kitchen, no bathroom, no privacy, no insulation, no electrical wiring and not code-compliant in any way. Calling this glass box a ‘tiny home’ or, God help me, an ‘innovative solution to the housing crisis’ is irresponsible and dehumanizing at best.”

That about hammers home the point…

Have a great Memorial Day weekend!

“I just got paid (in cash) thanks to three great companies.

“I did it without vesting, enrolling or tapping into any kind of pension/employment benefits.

Such is the genius of an investment strategy that allows Zach to collect cash.