When Markets Go Wild, Do THIS 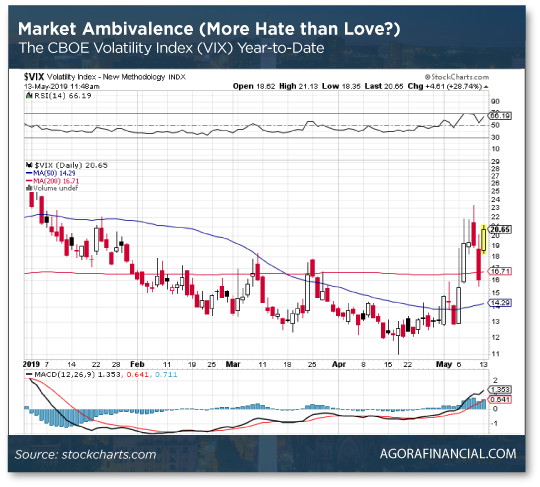 Even though the VIX is often understood to be an immediate indicator of investor sentiment, it’s actually a forecast of what’s expected in the next 30 days. Crikey

“No surprise that stocks swooned to start the week in volatile trade,” Mike says.

Two words: trade war. Back-and-forth between the U.S. and China has caused global market turbulence across the board.

(Except for gold: The traditional safe haven lived up to its name yesterday. Oh, and then there’s bitcoin — the legacy crypto’s proving to be an unorthodox safety trade?)

While Mike doesn’t believe the bull market’s bought the farm just yet, he says: “There are two important takeaways to remember when markets turn turbulent.

“First, look but don’t leap,” he says. “Whenever you see overnight selling squalls like we’ve seen… it’s better to let the storm pass before taking action.

“Don’t jump into new trades or sell stocks in a panic on the assumption that the opening print for the stock market will be much worse by the close.”

And to that point, Mike takes on the adage Sell in May and walk away. “Stock market seasonality does support the… adage to an extent,” he says. (Emphasis added)

“Looking back at more than 90 years of stock market data,” says Mike, “the period from May–October is indeed the weakest six months of the year for stocks, with the S&P 500 index up just over 64% of the time, notching average gains of only 2.4% over that six-month stretch.”

By comparison, stocks perform better in November–April — up 71.4% of the time, with average gains of 5.1%.

“However,” Mike says, “the data also show that some years stocks can really shine [May–October].

“For instance,” Mike continues, “the ‘sell in May’ move hasn’t worked nearly as well as in the more distant past.

“Between 1998 and 2011, for example, selling in May worked less than half the time, with stocks up nicely on average during the six-month period (May–October),” Mike says. 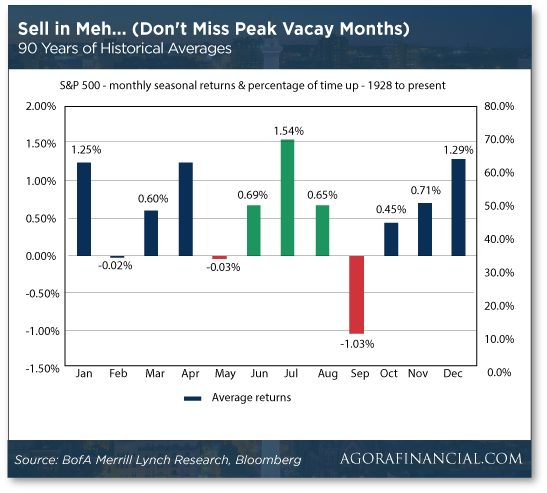 “… you’ll see that May is not so bad and the months that follow, June–August, are pretty darn good and not to be missed.”

Another reason to hold rather than sell in May 2019? We’re in the “sweet spot”: in the middle of the four-year presidential election cycle and “historically during this period,” says Mike, “stocks are up during May, with the S&P gaining 3.3% from May–August.”

Back to the dicey market…

“The second takeaway is seek quality amid volatility,” says Mike.

“Smart money flows into the highest-quality stocks when markets turn volatile,” he says. “These are the stocks that will outperform the overall market, and often by a very wide margin, as you can see in the chart above.”

Mike urges investors to refrain from pulling cash out of the market when things get choppy; instead, he says buy dividend-generating blue chips with strong track records and A or better financial ratings.

In the first four months of 2019, the Dow gained over 14% — one of the market’s strongest starts on record. To wit, Mike says: A volatile pullback for stocks was bound to happen at some point.

Bottom line? “This could be the start of some increased market turbulence,” says Mike, “but I expect stocks will fully recover.

“In the meantime, don’t overtrade and seek out high-quality stocks.”

[If you want to amplify those gains, Mike has identified a way to do just that — adding as much as $383,515 to your retirement funds.

That could set you up to retire a multimillionaire as early as this Thursday, MAY 16.

Retiring rich has never been this easy.

Click here to find out everything you need to know.]

So far today, the Dow’s regained over half of yesterday’s losses: It’s up 320 points, to 25,645. Market sentiment seems to have shifted practically overnight; perhaps it has a little something to do with Trump’s latest tweetstorm about trade with China.

The NFIB Small Business Optimism Index rang in better than expected at 103.5…

Almost a quarter of survey respondents cited “quality of labor” as their single-most important problem, which is close to a record for the history of the survey.

“To profit from the market's hot new stocks — like the Uber IPO that is getting so much attention right now — you need to know how Wall Street approaches these events,” says our wealth-management specialist Zach Scheidt.

Most Wall Street firms get their IPO stock positions at one price from the broker — $35 per share, for example. Then once the stock starts trading, shares might shoot up sharply to $45.

“These institutions have a BIG incentive to sell these shares and lock in a profit,” Zach says. “And that's what they do!”

According to Zach, institutional selling is why you shouldn’t be buying IPO shares in the first few days — or even weeks — after the stock’s debut.

“But wait a few weeks and after the dust settles,” says Zach, “and then these same institutions start building their real positions.”

All of which happens after institutional-money types perform due diligence on the IPO company — tracking stock trades, verifying earnings and following any corporate management reshuffling.

“If these institutions still like the stock after all of this research,” Zach says, “they start buying stocks over time.

“That's when you want to jump in with them and ride the stock higher — not when the stock is hyped up on its first day of trading.”

Although the IPO deck’s stacked in favor of Wall Street high rollers, “with the right playbook,” says Zach, “you can still make money alongside these investors over time. You just need to be patient.”

The ballot measure won the day by a tight margin — fewer than 2,000 votes made the difference — but it doesn’t mean “magic mushrooms” are necessarily legal.

“The mushrooms will still be illegal to buy, sell or possess,” says Ray. “But the new ordinance would keep Denver police from spending resources on enforcing laws surrounding psilocybin mushrooms, making them the department’s lowest priority.”

Ray says: “What we’re seeing is a direct offshoot of the marijuana movement.

“The fact that folks in the state with the longest track record of legal weed are moving even further away from regulation (especially with something as controversial as psychedelic mushrooms) is a pretty major testimonial from Denverites that cannabis legalization has been a huge success,” Ray continues.

And it’s an indicator of just how much sentiment in the U.S. is changing…

“Likewise, there are interesting implications down the road for medical research,” says Ray. Research on psilocybin — the drug compound from “magic mushrooms” — has already shown promise for the treatment of PTSD and other psychiatric disorders.

And prestigious Johns Hopkins University gained attention last fall when it recommended the federal government reclassify psilocybin as a Class IV drug with “a low potential for abuse” alongside such household names as Xanax and Ambien.

“The idea of using psilocybin as medicine seems particularly popular with the white-collar crowds,” Ray says.

“The use of psychedelics in small, managed doses has become a popular way to try to increase productivity and creative thinking, particularly among the technorati in Silicon Valley,” reports The New York Times.

Ray says: “As the legal statuses change… small biotech companies conducting early-stage research could find themselves with blockbuster drugs in their pipelines.

“We’ll be keeping a close eye out for more opportunities in this space.”

Have you heard the internet trend of googling “A Florida man…”? What pops up in the search engine after inputting those three words is likely outrageous, hilarious or head-scratching — and usually a combination of all three.

Thus we give you…

“A Florida man has been charged with reckless driving after an off-duty police deputy spotted him standing in his sunroof as his car continued moving down the interstate,” says Newsweek. 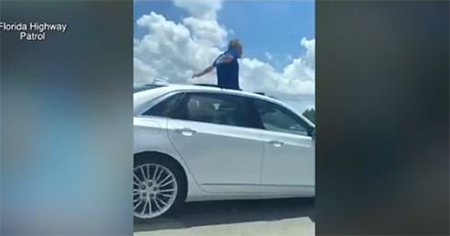 The deputy first noticed the white Caddy swerving from one side of the highway to the other. Then the driver popped through the sunroof and did his best Titanic reenactment.

At first, Mr. Olsen denied the incident but eventually said he would turn himself in because “he would rather be sent to jail than to return home.”

As for what prompted Mr. Olsen to stand in the car’s sunroof: He "thought it would be a nice way to praise God for a minute." Wait, he praises God with that potty mouth? Heh…

Mr. Olsen further assured the arresting officer that everything was perfectly safe because the vehicle was on cruise control and has "a gigantic computer in it." (This just in: Self-driving technology is here! Tell Tesla, Google and Uber to pack it in.)

No word if the wife’s bailed him out yet…

P.S. This 25-year investment insider tends to avoid the spotlight…

Which is why we were SHOCKED when he came forward with this urgent announcement to American seniors.

What he reveals right here could add as much as $383,515 to your retirement…

Starting as early as this Thursday, May 16.