Crude prices are cratering today, for no obvious reason.

At least when other asset classes make big moves, there’s usually some sort of catalyst. Or in the case of plainly manipulated markets, some sort of plausible excuse (i.e., a Federal Reserve press conference moving the gold price — more about that later).

But West Texas Intermediate down 3.5%, to $61.38, today? There’s nothing out there. Trust us, we’ve looked. Rising inventories in the Energy Department’s weekly numbers? Yes, but that was yesterday.

As we’ve been saying for years, informed by James Norman’s invaluable book The Oil Card, crude has been a thoroughly manipulated market since the time when modern-day oil futures began trading in 1983. But this is getting ridiculous.

➢ Meanwhile the clock’s ticking on Iran oil sanctions: The waivers for eight large buyers of Iranian oil expire at midnight tonight. The Indian press reports that India’s government is asking for a last-ditch exception, just to keep fuel prices down while the ruling party tries to win re-election this month. (Cynical, huh?)

With the failure of the coup attempt in oil-rich Venezuela, the talk of U.S. troops moving in is heating up.

Yeah, and then what?

“I know the Venezuelan military; I’ve trained some of them,” writes retired Col. Lawrence Wilkerson.

Wilkerson was Colin Powell’s right-hand man when Powell was secretary of state during the run-up to the Iraq War. Ever since, Wilkerson has been doing penance for propagating the lies that helped lead the nation into that war. Indeed he’s become a trenchant critic of Washington’s promiscuous military adventures overseas.

He describes Venezuelan troops as “reasonably professional, reasonably aware of Venezuela’s historical commitment to democracy and reasonably competent at their day jobs. They are proud of the fact that they are not Panama, i.e., a country into which the U.S. can send paratroopers overnight, kill several thousands, grab a narcotrafficker and leave. [He’s referring to ol’ “Pineapple Face” Noriega in 1989.]

“The majority of them, if the U.S. military arrives in Venezuela, will take to the hills — very formidable hills, with jungle-like backdrops — and they will harass, kill, take prisoner from time to time and generally hold out forever or until the ‘gringos’ leave.

“We might remember how the North Vietnamese and the Taliban accomplished this; well, so will the Venezuelans.”

Is anyone in Donald Trump’s inner circle asking him if that’s the legacy he really wants to leave?

“Sometimes investors will use any excuse at all to sell,” is our Greg Guenthner’s assessment of the market’s reaction to the latest hijinks at the Federal Reserve.

The Fed’s Open Market Committee wrapped up its every-six-weeks meeting yesterday afternoon. As expected, the FOMC stood pat keeping the fed funds rate in a range between 2.25-2.5%. As expected, the FOMC’s statement stuck to its “patience” language in an effort to talk down any concerns about future rate increases.

But the market is counting on a rate cut sometime this year… and when Fed chairman Jerome Powell strode before the cameras, he was a big letdown.

Reporters asked him about the precipitous drop in “core PCE” — the Fed’s preferred measure of inflation, the benchmark for its 2% inflation target. You saw the drop yourself when we showed it in this chart on Monday. 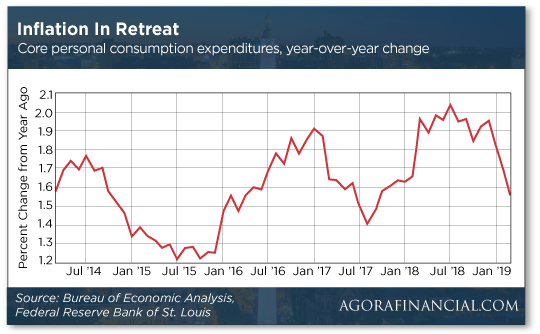 What the market wanted to hear was, “Yes, we’re gravely concerned about this drop. It might even spur us to cut rates later this year. You want a rate cut? Yes, we’ll give you your damn rate cut! Maybe June, maybe September. It’s coming, I promise! Just shut up about it and let me get out of here — there’s a martini somewhere with my name on it.”

Or, short of that, at least some sort of Fedspeak that would allow Wall Street’s Kremlinologists to infer a likely rate cut later this year.

But no. “We suspect transitory factors may be at work,” was Powell’s explanation for that nose dive on the right side of the chart.

Specifically he attributed the drop to moderating prices of portfolio management services, clothing and airfares.

Man… Powell took that one right out of the playbook of his predecessor, Janet Yellen. As you can see in the chart, inflation was slowing dramatically in 2017. After the FOMC meeting in June of that year, Yellen attributed the drop to “what appear to be one-off reductions in certain categories of prices such as wireless telephone services and prescription drugs.” (The number continued dropping for a couple of more months before reversing.)

Powell’s “transitory” talk, which came around 2:45 p.m. EDT, prompted traders to mash the sell buttons of both stocks and gold… 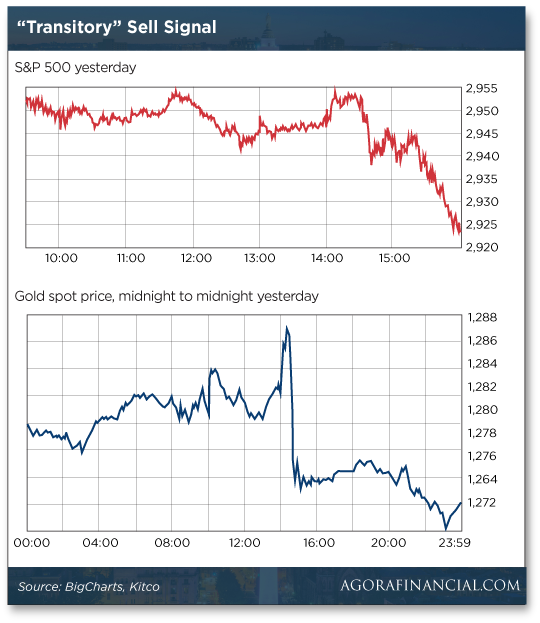 And as we write today, those losses have yet to be recovered.

Much of that gold selling is a mirror image of dollar buying; the dollar index began soaring amid the “transitory” chatter and this morning it stands at 97.8 — a huge reversal to the selling of the last week.

When last we left the exhausting saga of Elon Musk’s sickly automaker masquerading as a techno-wizardry juggernaut — that was a week ago — Musk was conceding he might need to raise more capital to keep the lights on. He skirted the obvious question of whether he’d raise that money via the bond market or the stock market.

This morning we have our answer. TSLA plans to raise $2.3 billion, mostly by issuing bonds. Less than a third of the total will come from the issuance of new stock… 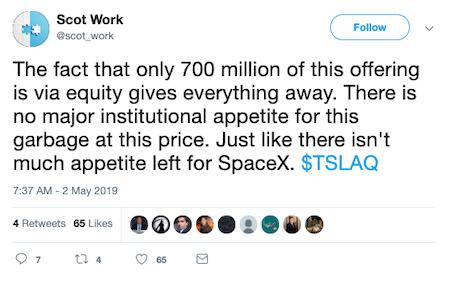 But as we said last week, cults die hard. TSLA shares are up nearly 2.5% today. Pass the Kool-Aid…

The feds are now on the case of the tossed toilets.

Last fall we told you about a peculiar development in the Illinois governor’s race. The Democrats’ candidate was J.B. Pritzker, heir to the Hyatt hotel fortune. It turned out he employed a rather aggressive strategy to slash the property tax bill on a vacant home he owned on Chicago’s pricey Gold Coast.

He had five toilets ripped out — thereby rendering the property “uninhabitable,” and assessed at only 10% of market value. Total savings: $330,000.

Pritzker wrote a check to make the issue go away, and he went on to win election in a landslide.

Last week, word emerged that federal prosecutors have been looking into the case for months. Pritzker claims to be unconcerned; he probably should be, simply given the odds: Four of the last 10 Illinois governors have done prison time.

But even if the feds don’t press charges… the timing couldn’t be worse politically. 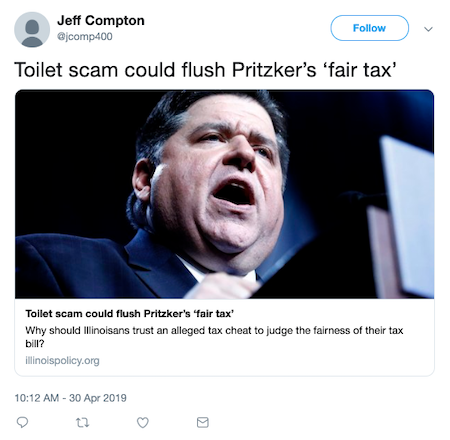 “Why,” asks Austin Berg of the Illinois Policy Institute, “should Illinoisans trust an alleged tax cheat to judge the fairness of their tax bill?”

“The shakeout in the pot industry is something that happens in all new industries,” begins today’s mailbag.

“California is a poor example to use because they’re working on driving all private enterprise out of the state, not just pot purveyors.

“It’s all a function of survival of the fittest and creative destruction in true capitalism.”

That said, what happens in California can have an outsized impact. It’s 12% of the country’s population. And as we’ve mentioned before, it looks as if California’s tax-and-regulation scheme for pot will be the model for New York state — which is another 6% of the population.

No, it won’t be enough to kill the cannabis industry. Far from it. But it will shift the flows of money in the industry… and Ray Blanco will be following those shifts for his readers in the months and years ahead.

“I agreed at the outset with most of your comments and quotes about huge government control,” a reader writes after we responded to a query about uranium tariffs/quotas and (admittedly) went off on a tangent yesterday.

“1. Do you believe uranium is currently needed for our base energy supply of around 20%? (Today, not what might be possible in the future.)

“2. If the answer is yes to above, what solution would you recommend instead of government intervention, at this point, to ensure we could still secure uranium supply for power? (Let’s forget for military needs for the moment.)

“Because I detest government intervention and control of almost anything 99 times out of 100, I don’t want to reflexively say no when it makes sense.

“I doubt anyone will be happy the government is uninvolved if the lights go out 20% of the time.

The 5: Good questions. Good answers will require more than our 5 Mins. allow today. We’ll tackle them next week — promise.

Ah yes, this was a thread a few weeks ago. A few people said they weren’t reading as often as they used to, but they were hard-pressed to identify the reason.

“I felt the same but I too couldn’t put my finger on why. I have been an avid reader since the early days and I still read it every day, so I wasn’t unhappy with it but it was missing a little something.

“After yesterday’s edition I put my finger on it…. sarcastic snarky comments! Love it! Welcome back, 5!”

Your editor’s been at this daily for nearly 9 years now. I suppose over long stretches of time there’s bound to be an ebb and flow — some weeks or even months where the sarcasm is less evident than other times.

Part of what’s going on — this is an explanation, not an excuse — is simple information overload.

We have ever more publications and editors whose work we follow here at Agora Financial. And the news flow has stepped up dramatically the last couple of years, with politics regrettably driving more and more of what’s happening in the economy and the markets. (We’ll be peeling the onion of that theme as spring turns to summer…)

Under those circumstances, it consumes much of our bandwidth just making sense of what’s going on. Making fun of it can wind up taking a back seat.

But yeah, I too sensed a little ‘tude coming through even as I was pounding away at the keyboard yesterday. Thanks for the affirmation! (And your continued readership.)

P.S. Imagine pocketing $5,092 a month — without playing the options market or buying an annuity or anything super-complicated.

You don’t have to imagine. You can do it. Follow this link and see how easy it can be.