“Over long periods of time,” Jim Rickards says, “the prices of gold mining stocks track the price of gold up or down, with two idiosyncrasies.”

First, Jim contends, “share prices [of gold mining stocks] can exhibit some correlation to major stock market indexes, regardless of the underlying link to gold.

“The second idiosyncrasy is that gold mining shares represent a leveraged bet on the gold price,” he says. “This is because of the difference between fixed costs (corporate overhead, interest expense, etc.) and variable costs (actual costs of mining operations).

“When gold prices are on the rise, fixed costs are constant, which means that proportionally more revenue drops to the bottom line.” Certainly, this force works in reverse when the price of gold decreases.

To boost bottom lines, “large gold miners can make… acquisitions where gold output is increased through the target company.”

Jim believes the positive outlook for the price of gold plus meaningful acquisitions absolutely applies to Newmont Mining Corp. (NEM).

We featured Jim’s take on Newmont in early March; at the time, he reported on the drama percolating between Canadian Barrick Gold — the largest gold producer in the world — and Newmont. 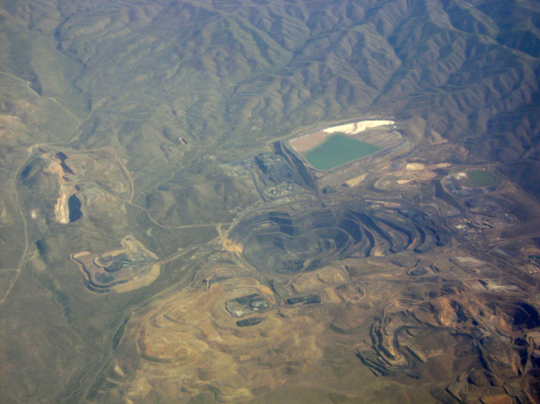 Barrick’s Nevada Goldstrike Mine: the largest gold mine in North America.

The two companies — with outsized egos? — have since agreed to play nice, working together on a mining venture in Nevada.

“While gold continues its modest but steady upward trend,” says Jim, “NEM is now in a position to make significant gains as it ‘catches up’ with the gold price after recent declines. 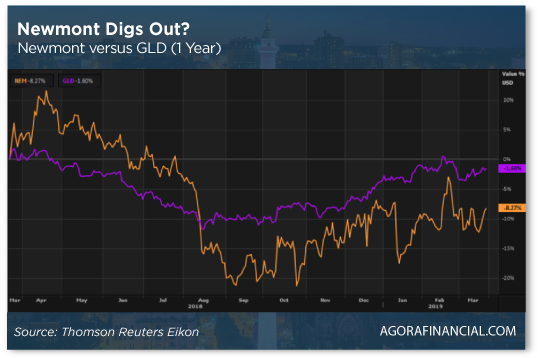 “As shown in the chart, Newmont… has underperformed physical gold (represented by the ETF ticker GLD),” Jim says.

“This is indicative in part of NEM’s sensitivity to the stock market’s drawdown last fall… and GLD’s status as a safe-haven investment alongside U.S. Treasuries.”

A dynamic that should give the gold miner a lift: “Newmont is… engaged in a major acquisition of Goldcorp Inc.

“The combined company will be the largest gold producer in the world,” says Jim, “giving it huge opportunities to achieve economies of scale and to leverage fixed costs.”

Newmont expects to finalize the $10 billion buyout of smaller Goldcorp in the second quarter of 2019. A deal that’s a certainty now…

“On March 25, 2019, the Mexican government antitrust agency approved the merger, which clears the way for a closing of the acquisition in the near future.

“Both stocks rose on the news,” Jim says, “but there is ample room for more gains once the deal is actually completed.”

[Ed. note: Jim and his Project Prophesy team have identified the best way to profit from the new bull market in gold and the prospects for NEM.

To learn more about the methodology behind these trades — Jim first perfected it during his work with the CIA in the early 2000s — give this a look right away before it’s removed tomorrow at midnight.]

Still waters at the markets today, excepting the Dow, which has shed 118 points; however, it’s hanging on above 26,000.

Among the day’s noteworthy economic numbers: Durable goods orders toppled 1.6% in February — slightly better than the “expert consensus” of economists polled by Econoday.

“Shipments of core capital goods (nondefense ex-aircraft) are also soft,” Econoday says, “coming in unchanged but following a 1.0% surge in January. Yet the lack of new core orders as well as a third straight 0.3% draw in unfilled core orders do not point to strength for March shipments.

“Most of the bad news about Brexit is out,” Jim Rickards says. “The UK is headed for a hard Brexit.”

By way of refresher, last week at The 5, we unpacked what Jim believes are the four options for the U.K. in the country’s bid to exit the EU:

According to Jim, the U.K.’s doing things the hard way…

“The May government will fall,” he says. “The EU deadline extension is shorter than expected and Angela Merkel is forcing the issue without a lot of sympathy….”

As for the pound sterling, Jim expects a nauseating amusement park ride with all the incumbent ups and downs, twists and turns. “A new anti-Brexit government or a new referendum will send sterling soaring.”

As for the long-term outlook, Jim believes the pound sterling “is set for a fall that will persist well beyond the date of Brexit itself.”

Per usual, Apple’s big announcement last week from the Steve Jobs Theater “was met with breathless anticipation by the media,” says our M&A specialist Zach Scheidt.

“Wall Street, on the other hand, yawned and looked the other way,” he says. “Apple shares are trading in the same general area that they were… before all of the hoopla.”

Same can be said of entertainment streaming dynamo Netflix — shares maintained their equilibrium regardless of Apple announcing its own streaming platform, Apple TV+.

“That’s not what you’d expect to see from a company that’s facing a huge competitive threat from an industry titan like Apple,” says Zach. “Under normal circumstances, investors would be worried about Netflix losing market share to its new rival.

On second thought: “By refusing to bail out of their NFLX positions,” Zach continues, “the smart money is telling us that they expect Netflix to do just fine.

“After all, the company has an entrenched position in the streaming media business.”

Seriously… Netflix has already smacked down the likes of Hulu and Amazon. And when it’s become part of the vernacular to use Netflix as a verb? They’ve arrived.

“At this point,” say Zach, “it looks like Apple will have an extremely tough time competing with the original content Netflix is producing.

“So what’s it going to take for Apple to win in this market?

“Apple will have to buy its content and pay a big price to really enter the streaming media market,” says Zach.

In other words, this isn’t a case of if you build (a shiny new app), they will come…

Instead, Apple will need to do three things:

Hmm… all things Netflix has already done. (In fact, did you even notice the $2 rate hike that went into effect for your standard Netflix subscription over the weekend? Yeah… we didn’t think so. Let’s face it — you were too busy Netflixing it up.)

Zach says: “I expect [Apple] to do the smart thing and buy the company that already dominates the field.

“That’s why NFLX investors aren’t at all concerned with the new Apple TV+ service.”

While Zach concedes Apple has been “storyboarding” some high-concept ideas and parading stars like Steven Spielberg in support of Apple TV+, the mega corporation has never had to negotiate with — much less — “keep the talent happy.” Cupertino’s a far cry from Hollywood.

“I think we’ll see an aggressive offer to buy out NFLX,” says Zach. “So hang on to your NFLX position — because the best is yet to come!”

“A sobering thought for investors of retail stocks… Amazon has killed off many retailers in the last 10 years,” says Alan Knuckman, our eyes and ears at the CBOE.

With more retailers expected to be eighty-sixed this year… but Alan is eyeing one stock that’s a real beauty. “In fact,” he says, “over the last decade, this company’s shares have outperformed Amazon by more than double.”

As for long-term profitability: “Since 2009, annual sales have grown by an incredible 450%. And earnings have grown in that span by more than 1,500%!”

So how did Ulta slay Goliath (in this case, Amazon)?

In short: “The market loves what it sees in Ulta.” 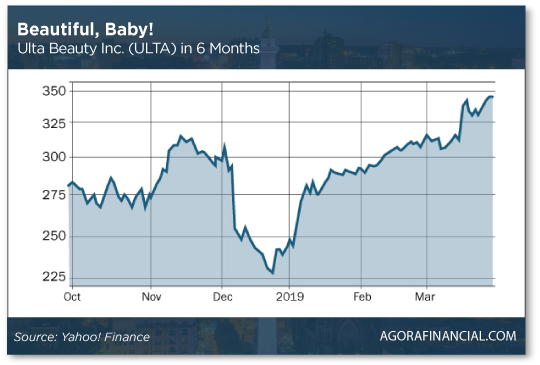 “That is, until the company reported killer fourth-quarter earnings two weeks ago,” says Alan. “On the news, the shares broke out big — and now the stock targets $410.”

Over 17% above where shares are currently hanging out — “even better, the stock can now lean on support at $320 to make its next move higher.”

Portfolio in need of a makeover? (Couldn’t. Resist.) “I’m recommending you consider these shares for a whole new look.”

(Absurd) Lawmakers in Arkansas sure have been busy… using taxpayers’ money to parse the English language. No, this isn’t a case of “what the meaning of the word ‘is’ is”…

Rather, last week, the Natural State — yep, that’s its official nickname — became the first to ban the term “cauliflower rice.”

You can’t make this stuff up.

“This law only affects people who want to deceive the public about how their food originated,” says state Rep. David Hillman… with a straight face, one can only presume.

What’s especially preposterous is the state government’s paternalistic reaction: They “apparently don’t trust that their constituents have a firm grasp on the English language,” says an article at Reason. 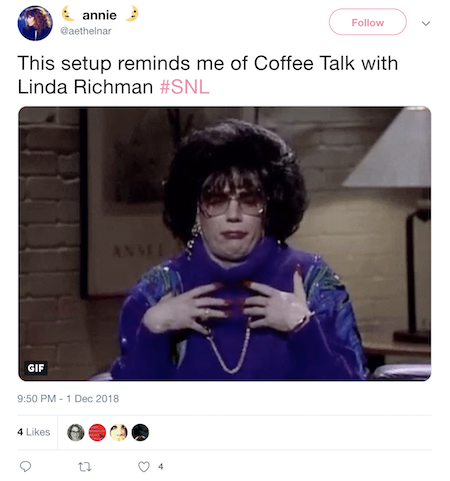 “Cauliflower rice is not rice—as the presence of the word ‘cauliflower’ in the name would strongly suggest.”

Which brings to mind Mike Myers classic SNL sketches; character Linda Richman would introduce word conundrums such as “Grape-Nuts — it contains neither grapes nor nuts. Discuss.”

Guess we shouldn’t give legislators in Arkansas any ideas…

In fact, his Project Prophesy system is signaling a gold-mining stock trade with potential upside of 270%!

Don’t wait to check it out here… The page will be taken down TOMORROW at MIDNIGHT.