Are Apple’s Best Days Over?

“Apple’s event felt underwhelming and confusing because it’s a dramatic new direction for the company,” writes Macworld’s Michael Simon after the company’s much-touted dog and pony show on Monday.

As we anticipated last week, there was no introduction of a breakthrough product — no new device that made people ooh and ahh the way they did when the late Steve Jobs trotted out “one more thing.”

Which won’t launch until the fall, as it turns out.

“Apple unveiled several services at its star-studded event Monday,” Simon writes, “and they all have one thing on common: They’re not ready yet. The only service that’s available to try out this month is Apple News+.” And even there, the bulk of the titles are just glorified PDFs for the time being.

It’s worth taking a good hard look at Apple today because of a rare departure from the norm we made a little over three years ago.

We delivered three free stock picks on Dec. 30, 2015. Almost always, we reserve specific recommendations to paying subscribers. But AAPL was a favorite of our Zach Scheidt, and he agreed to share it with a wider audience. 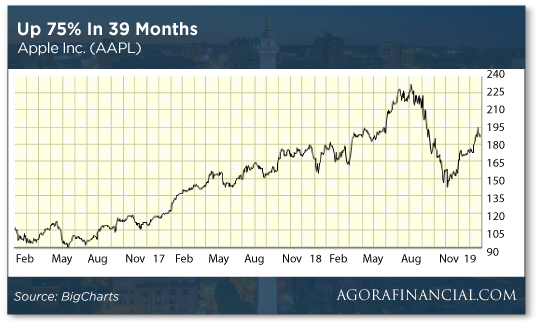 But now? The host of services “will mark a stark transition from Apple’s core business model,” Zach says today.

If AAPL is becoming a different company, is it still worth holding onto?

For starters… Even in late 2015, Apple wasn’t the company it used to be.

“Apple’s best growth days are now squarely in the rearview mirror,” Zach said back then. “Apple’s sheer size makes it impossible to continue to grow at the same rate it has in the past.”

But Zach was keen to point out that wasn’t a bad thing. Apple was transitioning from a go-go growth company powered by the iPod and later the iPhone… into a mature, dividend-paying stalwart. (Apple famously paid no dividend under Jobs’ leadership — he always wanted to plow AAPL’s profits into new and exciting products.)

Fast-forward to the present day. “The iPod is headed for extinction,” Zach says, “while sales for iPhones and iPads have been lackluster lately.

“So when Apple announced in November that it would stop reporting how many products it sold each quarter, many investors assumed the company was trying to hide its weakening sales.”

Not so. As Zach was telling us late last year, Apple was in the midst of yet another transition.

“The company stopped counting its device sales,” he reminds us, “because it wanted to focus on subscription services instead.”

Services. That was the highlight of Monday’s launch event, which was admittedly awkward. You got the sense that Tim Cook and crew were trying juuuust a little too hard, with cringeworthy moments like this… 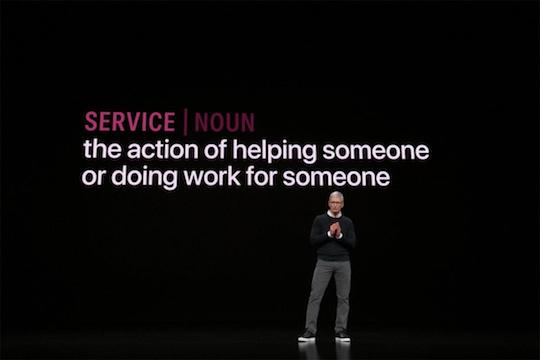 Still, there was no shortage of services on offer, even if most of them aren’t yet up and running…

“At last count, there were 1.4 billion Apple devices out there. The company can push these new services to users with a simple software update. All anyone will have to do is tap the new icon that suddenly appears on their phone or tablet.

“Soon Apple won’t have to hope enough people line up outside its stores for the latest gadgets. It just needs to convince folks to sign up for its newest services.

“It still has plenty of cash in the bank it can use to encourage them, too. It’s already demonstrated that it’s putting that money to use by signing up so many content partners, including the celebrities I’ve mentioned.

“Each subscriber will represent a new recurring revenue stream… giving Apple a monthly check it can rely on.”

But can these services compete in a crowded marketplace? “I believe Apple still has enough loyal customers to put these worries to rest,” Zach concludes. “So I love holding shares of AAPL as a dividend play.”

Even at today’s share price the yield is 1.55%. And the dividend grows every year — with the next bump up due in May. “I’m very excited,” Zach says, “to watch this income play continue to grow!”

[Ed. note: Dividends are swell… but if you’re looking for a way to turbo-charge your investment income, you should check out a simple method that allows you to pocket thousands of dollars every month with zero risk from the stock market.

Check it out for yourself right here. Please note the video will come offline tomorrow night at midnight.]

To the markets, where precious metals are getting stomped.

At last check, gold has shed $18 — tumbling to $1,291. The Midas metal’s latest foray above $1,300 lasted two weeks — which is better than the previous pop, which lasted all of two days. Silver, meanwhile, is only pennies above $15.

And then there’s palladium, which got way ahead of itself. When last we mentioned palladium nine days ago, it had set a record above $1,600 an ounce.

And while the potential remains for still higher prices — the supply-and-demand issues we addressed haven’t gone away — palladium was due for a rest. It lost $100 yesterday alone and as we write is $1,362. 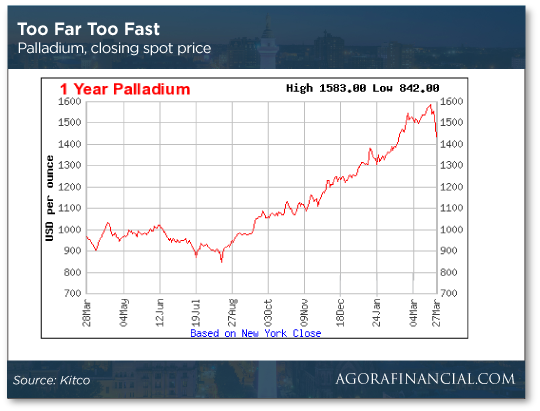 Researchers at BMO Capital Markets chalk it up in part to the approaching end of the quarter. Traders are eager to take their paper profits and turn them into dollars and cents that boost their results. Don’t be surprised to see more selling before the next leg up.

As for stocks… not much to say. The major indexes are almost ruler-flat, the S&P 500 clinging for dear life to the 2,800 level.

The big economic number of the day is the Commerce Department’s final guess at GDP for the fourth quarter of last year. It clocks in as expected at an annualized 2.2% — on par with the last decade, which has been the weakest economic expansion of the post-WWII era.

“The next earnings season starts in three weeks with early reports setting a low bar to overcome. That means any positive surprises will send stocks vertical,” says Alan Knuckman, our eyes and ears in the Chicago options trading pits.

“Corporate profit growth estimates for the next quarter have shrunk from over 4% to under 3% in the last weeks. On top of that, 105 of the S&P 500 companies have issued negative guidance for their stocks.

“But while analysts are tempering expectations for the upcoming quarter, the S&P 500 and Nasdaq posted new swing highs last Thursday to keep the uptrend on track.

“In short, markets are still moving higher and corporate America has a low hurdle to clear next month to surprise on the upside.”

The British pound languishes at one-week lows of $1.31 a day after the latest Brexit follies.

Yesterday brought what was supposed to be a new and exciting chapter in the world’s longest and most boring financial crisis. Prime Minister Theresa May, who can’t push her Brexit agreement with the European Union through Parliament, was sidelined for a day. Other members of Parliament were allowed to submit their own Brexit proposals — a rare legislative maneuver unseen in London for close to a century.

In all, MPs voted on eight Brexit variations… and every one of them went down to defeat.

Then it was May’s turn to speak up again. She promised if Parliament got around to passing her Brexit deal, she’d resign by… well, sometime, eventually.

As things stand, Britain will “crash out” of the European Union if there’s no deal by April 12 — two weeks from tomorrow.

Heh, Mobius ought to know. He launched one of the first emerging-market mutual funds with Franklin Templeton more than 30 years ago.

“We would be better off putting a notice on our website saying that we can no longer ship any orders to Kentucky,” says Chris Heitman, owner of Wisconsin-based Pegasus Auto Racing Supplies.

It’s been nine months since the U.S. Supreme Court issued its ruling in South Dakota v. Wayfair Inc. — clearing the way for state governments to demand sales tax revenue from online retailers based in other states.

And for legions of small and medium-sized online businesses, it’s been just what we anticipated — an absolute cluster.

Different states impose different tax rates on different categories of goods. Or even the same goods; the fireproof underwear Heitman sells might be clothing in one state and “specialized equipment” in another. Somehow, small fry are supposed to keep track of it all.

Heitman tells Reason his firm grossed $38,000 last year on 299 sales to Kentuckians, netting $1,500 in profit. Aside from the cost of the tax itself, Heitman says he’ll have to spend $750 on accountants to process the 17 pages of tax forms sent to him by the Kentucky Department of Revenue.

And that’s just one business dealing with one state.

Congress might be coming to the rescue. There’s bipartisan legislation with two key provisions that would offer relief to the likes of Heitman:

“I have been a reader of yours for a few years now,” says an entry in our mailbag.

“I don’t know if it is me or it is on your end. It seems as if your product is missing something.

“It used to be I would look forward to reading The 5 religiously on a daily basis. Now if I miss it, no big deal. Maybe it doesn’t show up on a consistent basis, plus I don’t think the content is what it used to be…

“I do manage a farm equipment business and I am extremely busy, but I always made time to read The 5.”

The 5: We’re always responsive to feedback, but it helps if there’s some, well, specificity to it. If “the content isn’t what it used to be,” what’s changed?

It might be something your editor is oblivious to. I’m a little close to the subject, after all… and I’ve been at this daily for eight and a half years now.

Our aim hasn’t changed. We consider each daily episode of The 5 a success if…

But if we’re falling short in any way, we want to know what it is. Drop us a line — especially if you’re a longtimer who feels as if this daily missive ain’t what it used to be…

P.S. It sounds too good to be true — collect thousands of dollars in investment income each month, with no exposure to the stock market’s ups and downs.

But in just 90 seconds, you can learn about a simple technique that can help secure retirement. Click here and give it a look. (At only 34 seconds in, you’ll understand why so many people have viewed this presentation in full.)