Gold at the Turning Point

“Gold has built a monster base since it registered its bear-market lows in late 2015,” says talented Agora Financial analyst Greg Guenthner.

“Over the past three years,” he says, “gold has bounced off its lows near $1,050 and attempted several rallies that have all failed before hitting $1,400.

“Now a five-month rally is setting the Midas metal up for what could be its most important breakout in more than a decade: 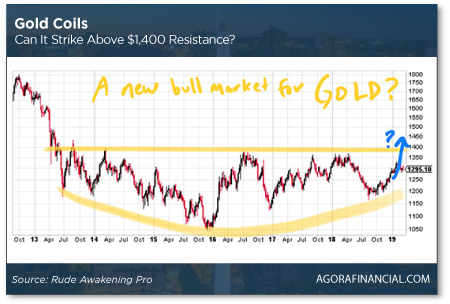 “If gold can continue to rally and break above $1,400,” Greg says, “we could very well witness the beginnings of the next great bull market in bullion.”

That’s saying something, coming as it is from Greg… He called the bear market on gold back in 2013. (And — ooh, buddy — there were a lotta furious gold bugs out there; in fact, one went so far as to call Greg the Antichrist.)

Perhaps that’s whom he was responding to when he said in February 2013… “I’m not some lunatic who doesn’t understand the strong fundamental arguments backing gold.”

“The damage is done,” Greg said at the time. “After a weaker push last summer that failed to break $1,800, gold has consistently trended lower for more than four months.

“Yesterday’s brief breakdown below $1,640 is just advance notice that lower prices are in store for gold in the near future.”

Greg continued: “Gold’s decade-long bull market has attracted more than a few momentum buyers. And like it or not, these weak hands are adding to the selling pressure.

Back to the present: “Let’s focus on gold’s performance over the past six months,” says Greg.

“At the start of the fourth quarter, gold futures were in the gutter. Gold had just broken below $1,200 to post new 52-week lows as stocks soared.”

Then “when stocks tumbled from their highs in October 2018,” Greg says, “shell-shocked investors turned to gold.

“An early October surge led to a breakout in December. By New Year’s Eve, gold was streaking back toward $1,300.”

And even though the stock market has made an extraordinary comeback so far this year, Greg’s watching as “gold continues to build on its gains.”

Not only that, but gold-related investments have experienced a resurgence, too. Checking in on VanEck Vectors Gold Miners ETF (NYSE:GDX): “Last month,” says Greg, “the gold miner ETF had gained almost 7% in just five trading days as gold futures soared to a fresh breakout above $1,325. 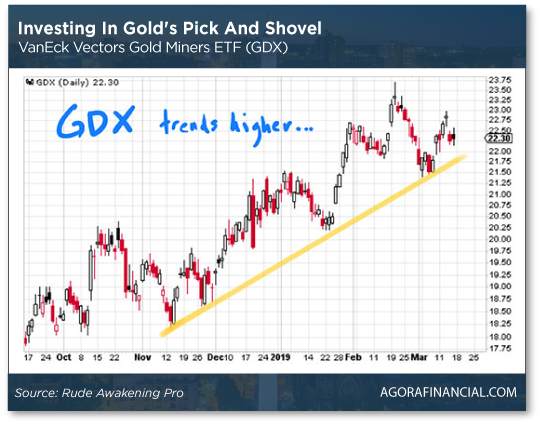 “That’s a major change in character from September when the miners found new lows as gold stabilized in the $1,200 range.”

Then came October’s breakout — nothing short of a choppy mishmash — but by November, GDX was getting the traction needed for a notable rally.

(For more on gold’s trajectory for the second quarter, keep reading…)

[Ed. note: Because of the confidential nature of this special offer from Greg Guenthner, we’ll be removing it from the internet tonight at midnight.

You’ll need to set aside just 90 seconds to watch it right away.

He says: “Smart money has been slow to figure out gold’s potential. Hedge funds and other big institutions were consistently net-short gold futures since last July.

“Wall Street got it wrong again,” Mike says. “The largest short position in August and September coincided with gold bottoming.” (Something to note: Wall Street made its first “bullish” bet on gold in December… for the first time since July 2018.)

Today? Gold’s up 9% since bottoming out in the fall… “As these institutions scramble to cover their positions,” Mike notes, “they could fuel the next explosive rally in gold.”

And in a story we’ve been following in 2019, palladium set a record yesterday.

“Palladium topped $1,600 an ounce for the first time,” says Bloomberg, “and there’s little sign of the rally slowing as global supply tightens.” 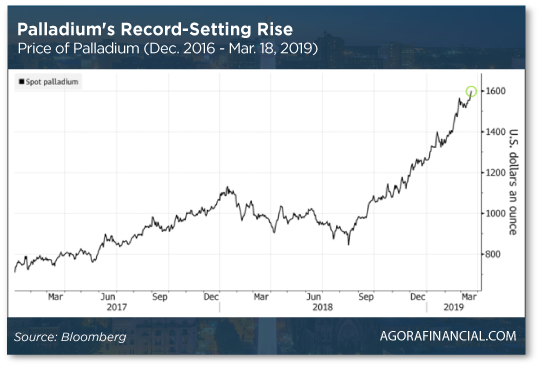 Indeed, the price of palladium’s increased 26% so far this year… and it’s looking like it could rocket even higher.

While the high-demand metal’s already in short supply for automakers, in particular, Bloomberg notes: “Fiat Chrysler Automobiles NV’s recent recall of about 863,000 vehicles that violate U.S. standards could spur even more demand.”

And — with speculators galore — there’s a vigorous borrowing market for palladium, prompting investors “to pull supplies from exchange-traded funds and lease them out.”

Adding to short supplies: “Russia’s trade and industry ministry is considering banning exports of precious metals scrap and tailings from the world’s largest producer of the white metal,” Reuters reports.

To which Philip Newman at Metals Focus says: “When the market is as tight as palladium is, sometimes such news can take on more significance than it should.”

We’ll keep you posted on palladium… and where to from here.

“The S&P 500 hit a new high for the year last week,” reports our retirement and income strategist Mike Burnick. But — apparently — a rising tide doesn’t lift all boats…

“Even in a sharply rising stock market,” he says, “there are plenty of sectors you should avoid.”

And while the Commerce Department reports the retail sector — minus sales of autos and gasoline — floated 1.2% higher from December to January, here’s what wasn’t reported: 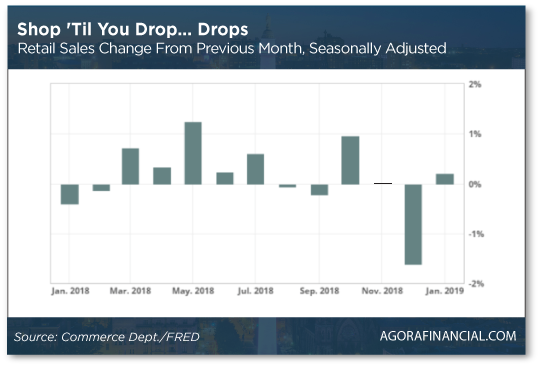 “The biggest fly in the ointment was a big downward revision to already dismal December retail sales results,” Mike says. That number dropped 1.6% in December — significant, too, because December’s the month retailers expect to make up for sales shortfalls from the rest of the year.

“That marks the steepest drop in retail sales since 2009, on the heels of the great recession,” Mike says.

In the wake of diminishing sales, it’s no surprise then mall mainstays like J.C. Penney, Victoria’s Secret and Gap are closing store locations or, in the case of Payless ShoeSource, shuttering stores altogether. Within the last 24 hours, the mid- and small-market variety retailer Shopko announced plans for liquidation.

According to Coresight Research, store closures from Jan. 1–February 2019 are up 23% over the same period last year. Add to that thousands of stores that closed up shop in 2018… 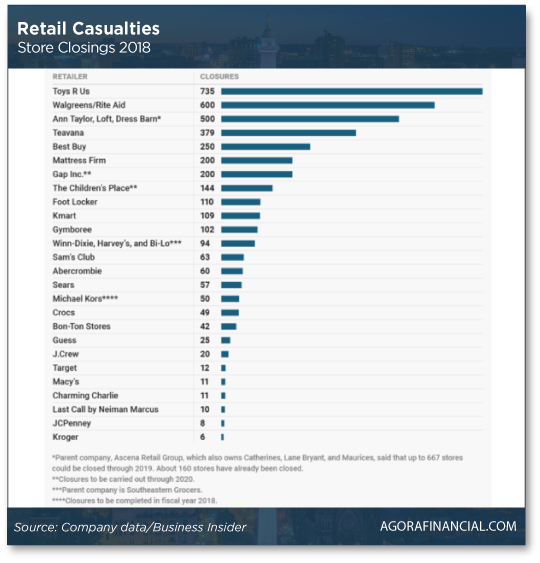 “It is easy to give lip service to risk management when the stock market is moving higher,” Mike says. To avoid unnecessary risk, he recommends steering clear of retail stocks.

“Instead you should focus your investments squarely on the sectors of the market that are outperforming,” Mike says.

“Case in point, technology is one of the best-performing sectors this year, up nearly 20%,” he says. “Or another red-hot sector: gold and silver mining stocks, which are up 25.7% since September.” As Mike sees it: “The best is yet to come with gold and silver stocks, with much more upside ahead.”

And — when it comes to retail stocks and your portfolio — “what you don’t own is just as important as what you do,” Mike concludes.

Why did the cow cross the road? To get to a Chick-fil-A, of course.

“A cow on the run in Indiana near a Chick-fil-A restaurant prompted some witnesses to suspect the fast-food chain was up to a new marketing tactic,” says Fox News.

Not exactly… Police gave chase to the cow — taking a weekend furlough from the farm — as the bovine hoofed it across a busy road to a local Chick-fil-A. 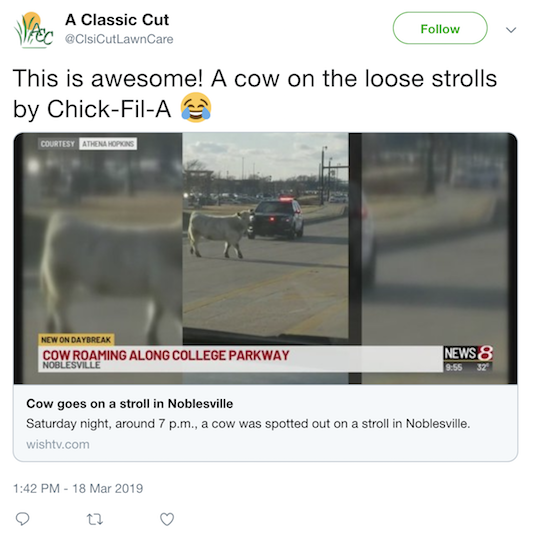 In a case of you can’t buy this kind of publicity, the cow coincides perfectly with the restaurant’s long-running (presumably successful?) ad campaign that features “cows” urging people to “Eat mor chikin.”

The police department’s having fun with it, encouraging locals to post any footage of the cow gone wild to the department’s Facebook page.

Curiously, no word on when — or even if — the cow was apprehended. Was she made to do a “perp” walk? Frisked? Hmm…

More on daylight saving time — and this happens to come from the Hoosier State — a reader says, “I live in Indiana and I was happy when we went to DST.

“No more calculating what time it was in the other states. If you don’t like changing the clocks, try atomic clocks that adjust themselves automatically. DST is the law as of now, so get over it.”

“In case you need another voice regarding DST,” a reader writes, “for those of us who prefer to exercise outside regardless of climate, DST allows us to do that and still work until 5 p.m. local.

“If people don’t like to change, let’s just leave it on DST all year and be done with it. Our health care costs will go down in the long run.

Considering one alternative to DST: “Maybe using Zulu time is harder than you think,” a reader says.

“Back in late 1979 I was a Marine Corps first lieutenant serving as the station duty officer at Marine Corps Air Station El Toro in California. The Wing scheduled holiday flights with the C-130 to different parts of the country to allow West Coast Marines to get home and return for the Christmas holidays.

“The message to the Marine bases went out using Zulu times for all the flights. (All aviation flights are listed in Zulu times when filing a flight plan.) I had a number of junior Marines show up for their flight but were like eight hours early. You guessed it — their first sergeant didn’t know what Zulu time meant, thinking it was the local time.

“Maybe we should do like the Chinese and only use Washington, D.C., time for the whole country?

Because as soon as you do…

You’ll discover how you could make thousands in the market every month.