Boeing: Yes, It Can Get Worse

After the Ethiopian Airlines crash eight days ago, BA shares plummeted with each new announcement about one country or another grounding the 737 Max.

The United States was the last holdout… but when Washington grounded the jets last Wednesday, BA’s share price actually rose a bit and stabilized, perhaps on the theory the worst was over.

Not so: Over the weekend we learned the feds are pursuing a criminal case against Boeing. Last Monday, the day after the crash, a grand jury issued what The Wall Street Journal calls “a broad subpoena… to at least one person involved in the 737 Max’s development.”

Boeing is down another 2.5% today — which, remarkably, is only a six-week low. BA has still doubled over the last two years.

While BA’s sell-off appears fully justified, the market reaction looks all out of whack when it comes to the major U.S. airlines.

They all sold off sharply early last week — even Delta, which has no 737 Maxs in its fleet!

The emotional reaction is totally understandable, says our Zach Scheidt: “Two of my teens had been excited about flights they’d be taking for school trips this spring. Now they are understandably worried about whether they can trust the airlines.

“As a father, I share their concerns. But as a businessman and market analyst, I can reassure them that flights will be safer as a result of this crash.

“Essentially, events like these are wake-up calls for the industry. They shake people out of rote routines. Mechanics will be taking much closer looks at their planes, pilots will be reviewing their emergency procedures and everyone will be erring on the side of caution.”

And the prospect of someone (or someones) getting frog-marched to the federal pen would ultimately instill confidence.

“So while it may sound counterintuitive,” says Zach, “the best time to fly is actually after an accident that catches everyone’s attention.

“For investors, it can also be a great time to pick up shares of airline stocks,” Zach continues — “taking advantage of lower prices to lock in a higher yield and a chance to enjoy rebound profits.”

The grounding of the 737 Max is nearly inconsequential for the major U.S. carriers, because per USA Today, those jets make up only a tiny sliver of daily flights:

“Despite the recent tragedies, it’s still a relatively good time to be an airline,” Zach concludes. Traffic is up: The International Air Transport Association forecasts a 6% increase from 2018 to 2019. It also forecasts higher sales and earnings.

[Ed. note: For only a few more hours, Zach’s publisher is offering access to a unique opportunity that allows you to lock in thousands of dollars of income — with just four clicks of a mouse, and without risking a penny in the stock market.

Curious? See for yourself right here — but don’t waste a moment. This presentation comes down tonight at midnight.]

If it weren’t for Boeing, the Dow would probably be starting the week in positive territory.

But at last check the Big Board was fractionally in the red at 25,841. The S&P 500 and the Nasdaq are both up about a third of a percent.

No big economic numbers today, but homebuilder sentiment is hanging in there. The Housing Market Index from the National Association of Home Builders registers 62 this month, the same as last month.

That’s a solid number, but the internals of the report show traffic is falling. “This underscores growing concern in the housing sector that sales are being driven by high-end buyers,” says Econoday, “while other buyers and especially first-time buyers do not appear to be showing increasing interest in new homes.”

Meanwhile the darling of the precious metals this year is again soaring to new heights — thanks in part to what’s being labeled a “supply shock.” The bid on palladium this morning is $1,549 an ounce.

Last week brought word of a recall by Fiat Chrysler — three Dodge models and one Chrysler, 860,000 vehicles in all — because of failed federal emissions tests. If the catalytic converters need replacement, that will require another 77,000 ounces of palladium — according to a New York-based refiner cited by Bloomberg.

Already palladium began the year 2019 in a supply deficit — with Citigroup forecasting production trailing consumption by 545,000 ounces. Emissions rules keep getting stricter around the world… so palladium is in demand even with auto sales slowing down in the United States, Europe and China.

“This eventually will be a bit of a supply shock,” Maxwell Gold of Aberdeen Standard Investments tells Bloomberg. “Overall, this does paint a very positive picture of just growing emission standards globally, particularly in the U.S. for palladium and gasoline engines.”

Having said that, Mr. Gold might be talking his book: His firm issues (to our knowledge) the only pure-play palladium ETF, the Aberdeen Standard Physical Palladium Shares (PALL).

As stellar as palladium’s performance has been, it pales in comparison to rhodium.

Rhodium is another of the six platinum group metals along with platinum and palladium. (If you must know, the others are ruthenium, osmium and iridium.) The price is up 35% this year — past $3,000 an ounce, to an 11-year high.

Rhodium is also needed in catalytic converters — and as a bonus, it’s also used in diesel engines. “As long as palladium prices continue to push to new highs, you will continue to see rhodium rally,” Bernard Sin of MKS Group tells Kitco News.

Alas, the only pure-play rhodium ETF isn’t available on a U.S. exchange. But if your brokerage account gives you access to London-traded shares, you could take a flyer on the Xtrackers Physical Rhodium ETC Fund, with the ticker symbol XRH0. That’s a zero at the end, not an “O.”

One of the most straight-laced, hard-nosed billionaires out there just gave his endorsement for pot investing.

It was Peltz who forced his way onto the board of Procter & Gamble a year ago — where he’s helped engineer a turnaround. He’s also on the boards of Sysco and Wendy’s. Point being, “He’s not a bit player who’s trying to get some attention by jumping on the pot trend,” Ray says.

“As part of the role, Peltz will have the option to purchase nearly 20 million shares of Aurora at $7.75 per share. That’s enough to potentially make him Aurora’s second-largest shareholder, if those options are exercised.”

Still, Ray can’t help chuckling a little: “Peltz may be one of the best investors in the world, but the price he’ll have to pay for his shares of Aurora are a whopping 225% higher than the price we paid back when I first recommended shares.”

No, it’s not too late to make those sorts of gains in the cannabis sector. To learn about the company that’s got Ray’s attention right now — and how he feared for his life in the midst of his boots-on-the-ground research — give this a look.

OK, it’s not as ingenious as selling Girl Scout cookies outside a marijuana dispensary (a true story we related last year)… or is it? 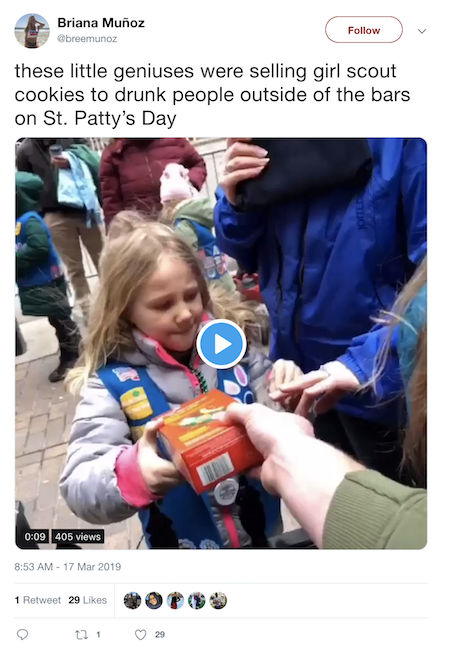 Sadly we don’t know where that video clip was shot so we can give the young entrepreneurs proper credit. But elsewhere on the web we see the Fox affiliate in Milwaukee…

[Milwaukee — even more inspired! We’re talking about the state where you’re urged to “Drink Wisconsinably!”]

… caught up with some like-minded Girl Scouts. “I am trying to help people get food, and also reach my goal,” said Jasmine Weiner. “You sell a lot on St. Patrick’s Day.”

Enthused one customer, “The entrepreneurship of these young women, selling cookies during St. Paddy’s Day when they know that people are going to be completely willing to give up their money for sugar, is absolutely brilliant.”

Sorta restores your faith in humanity, doesn’t it?

“Outlandish? Looks like standard operating procedure to me,” a reader writes after we broached the possibility Washington engineered the recent blackout in Venezuela. “And they don’t even seem to be all that concerned with covering their tracks.

“Maduro is a jackass and a thug. In other words, he’s a head of state. Par for the course. Elliott Abrams, Bolton, Pompeo and the rest of the neocon chickenhawks are evil buffoons.

“But let’s look on the bright side. At least we don’t have to listen to the lunatic provocations of insane McCain anymore.”

“There is nothing remotely outlandish about Dave’s suggestion that the U.S. caused the blackouts in Venezuela or the failure of their backup system,” affirms another.

“We have a long history of meddling, assassination and regime change in Central and South America going back almost to the beginning of our republic. Oliver Stone and Peter Kuznick did a pretty good job of enumerating the more recent such events in The Untold History of the United States.

“Edward Snowden also pointed out that one of his reasons for leaking classified documents (only 10% of which have been made public so far) was because they had little to do with terrorism and lots to do with bringing down infrastructure in friendly countries, such as in Japan, Australia and Europe. One such attack was on Iranian centrifuges, and Iran responded with a similar attack on our PLCs (programmable logic controllers used in factories and power plants). They also used GPS ‘spoofing’ to commandeer a CIA UAV and land it in Iran.

“Such cyberattacks on our part, along with a massive deployment of additional new satellites, have proven to be a very useful tool when it comes to getting ‘consensus’ with our allies on sanctions against our enemy du jour.

“In a side note: In 2003, as a business jet pilot I helped take a man from D.C. to Caracas late on a Sunday night to be tried and shot by Hugo Chávez, who had just reversed an attempted coup by the CIA. Apparently this man had been instrumental in the plot, and Chavez was demanding his return (I don’t know for sure if he was shot).

“When we got there, we noticed a brand-new U.S.-registered Citation X jet sitting on the ramp under guard. Reputedly it was filled with pallets of U.S. cash. A few years later in Iraq I saw similar pallets of cash being unloaded in Baghdad. (So who says cash circulation is obsolete? — it’s still essential to certain types of transactions)”

Rewind to the Vietnam War, for instance: How could the CIA have run its Air America front company’s operations in Laos — flying in supplies to the anti-communist forces and flying drugs out — using only electronic payments?

It’s totally possible. See for yourself at this link. Please note: The link goes dead after midnight tonight.