“Last week was another milestone for the stock market bulls,” says our income expert Mike Burnick.

“The tech-centric Nasdaq-100 Index gained ground for the 10th week in a row,” he says. “That matches the longest weekly win streak for the index since way back in 1999.”

Instead of partying “like it’s 1999” (RIP Prince), Mike says: “Doom and gloom are thick enough to cut with a knife.

“Most folks simply can’t believe the speed and magnitude of this early-year rally.

First, we turn our attention to tech stocks — they’re once again in the driver’s seat. And it’s not just select FAANG stocks that are leading the markets’ rally. “It’s very broad based,” Mike says.

To wit, we take a look at the S&P 500 that’s been up nine of the past 10 weeks with a wide majority of stocks — large- and small-cap, tech and nontech — advancing over the 10-week period. 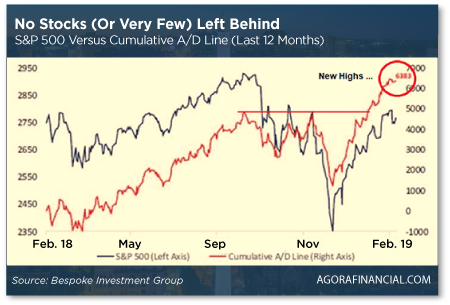 We should back up a bit. The red line there is the cumulative advance-decline line, or A/D line, for the S&P 500 — an indicator based on the number of advancing stocks minus the number of declining stocks. The black line is the S&P 500 itself.

Key point: The net number of stocks that are advancing across the broad market has broken through to all-time highs.

“The S&P, Nasdaq and other indexes, however, have yet to reach new highs,” Mike says. “This tells me there are plenty more rank-and-file stocks that could move to new highs.”

“That’s a very bullish sign telling me the major indexes should also hit new highs soon.” Investors, though, aren’t getting “the feels”…

“Case in point,” Mike continues, “analysts at Bespoke Investment Group crunched the numbers on every time the Nasdaq posted a big move over a similar time frame of 10 weeks.” They found “stocks were much more likely to keep moving higher than to turn lower.”

Looking at the data: The Nasdaq has posted eight similar 10-week winning-streak periods; 80% of the time, the month following the streak has posted average gains of 3.1%.

“There were only two cases when the Nasdaq declined one month after a big winning streak,” says Mike, “and the average decline was just 2.2%.”

What’s more remarkable? Three months after these 10-week hot streaks, the Nasdaq was higher 100% of the time with average gains of 10.1%.

Bottom line: “Don’t get spooked into staying on the sidelines,” Mike says. “History shows that stocks can still move a lot higher from here.”

[Ed. note: Don’t get sidelined when it comes to your retirement either…

It’s not IMPOSSIBLE. In fact, if you can place a short three-minute phone call to a toll-free number…

You could be on a beach somewhere, enjoying your new multimillionaire retirement lifestyle.

You can do this!

To the markets today, which are being moved mostly by events overseas: The European Central Bank delivered a surprise at the end of its regular policy meeting.

Only three months ago, the ECB began phasing out its own version of “quantitative easing” — the sort of bond purchases the Federal Reserve swore off way back in 2014. The thinking was that the eurozone economy was finally strong enough to kinda sorta get by on its own.

So much for that. This morning the ECB slashed its economic outlook and announced “fresh measures to stimulate the eurozone’s faltering economy,” says The Wall Street Journal, “making it the first rich-country central bank to ease policy in response to the global slowdown.” Specifically the ECB will issue cheap long-term loans for the banks.

Negative view: Oh, crap! The economy must really be going in the tank if the ECB is panicking like this! Sell!

For the moment, Wall Street is running with the negative view. The major U.S. indexes are back where they were three weeks ago, the Dow headed for a four-day losing streak at 25,462.

None of that alters the longer-term bullish outlook we laid out earlier. The ECB’s “stimulus” could have easily been taken as a plus.

“Unless we witness a major breakdown, this is perfectly healthy market action,” chart-watcher Greg Guenthner tells us. “We have to prepare for these moments and exercise a little patience as the averages digest their historic start to 2019.”

Bogus stress tests for banks are about to be history…

No matter — even the original version was bogus and the test has been watered down in the decade since.

As we quoted in a previous issue at The 5: “There are two problems with the financial ‘stress tests,'” wrote University of San Diego finance professor Frank Partnoy in 2009. “First, they weren’t stressful. Second, they weren’t tests.”

Heh… that about sums it up.

The Wall Street Journal says: “Regulators dialed back a practice of publicly shaming the nation’s biggest banks through ‘stress test’ exams, taking one of the biggest steps yet to ease scrutiny put in place after the 2008 crisis.” (emphasis added)

We wouldn’t want to “publicly shame” vampire squids — er, snowflakes — or damage any delicate psychopaths — er, psyches — with too much scrutiny!

We expect the Fed to pass out participation trophies this year… heh.

This go-round, the company — under the name MoviePass Entertainment — “hopes to grow its subscription base by focusing on producing and marketing its own films.”

Yep, MoviePass is going from the movie-watching business to movie making.

“We have gained a tremendous amount of insight into moviegoers and the industry over this past year and a half,” says MoviePass CEO Mitch Lowe.

And we gotta say… we love this guy. Nothing gets him down. What’s that even like? 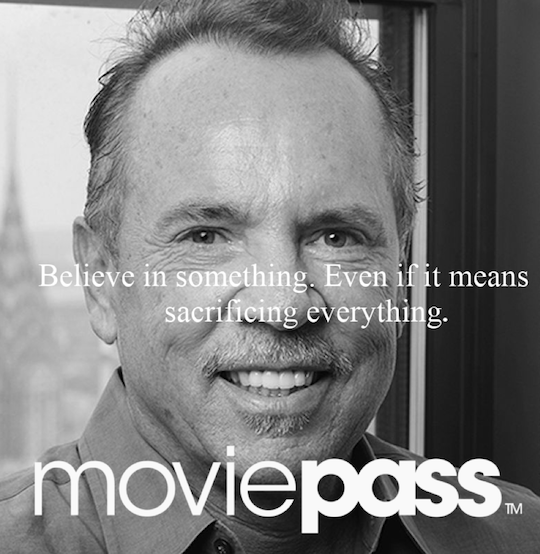 We’ve been in the entertainment biz a whole year and a half… Let’s make a movie!

“[We] now have a winning combination that we believe will drive consumers to our films,” Lowe says, “and re-energize casual moviegoers to go more often and see great films in local theaters — films that consumers often wait to see much later through streaming services.”

The fourth movie — The Reckoning — is a horror flick. (Maybe it follows a disgruntled MoviePass subscriber as he exacts revenge… heh.)

As far as we can tell, this is just another gyration for a company that’s been in its death throes almost from the beginning. That said… you never know. We all love a good comeback story.

In a case of unintended consequences: “People in states where marijuana is legal are eating more cookies and ice cream,” says MarketWatch.

“Potato chip, cookie and ice cream sales all increased in Colorado, Oregon and Washington as recreational marijuana became legal in those states, according to a new study.”

In a joint study — heh — between the University of Connecticut and Georgia State University, researchers found sales of chips, cookies and ice cream increased 5.3%, 4.1% and 3.1%, respectively, in the legal weed states listed above. 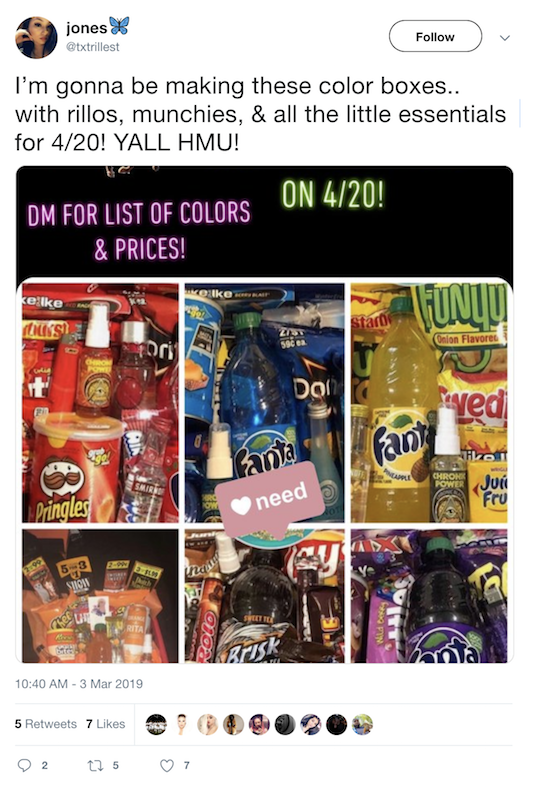 All the munchies… and color-coordinated, too!

The study goes on to say: “A widespread urban myth is that marijuana consumption is associated with the so-called munchies, namely an irresistible urge to consume large amounts of snack or junk food…”

So far, neuroscience doesn’t have an explanation for cannabis-induced cravings… but the snack food lobby might want to get on the legal weed gravy train — that’s assuming they haven’t already.

We heard from one of our regulars yesterday after posing the question: “Would the antitrust division of Trump’s Justice Department sit idle as American gold in the ground gets shipped off to Chinese vaults?”

Responds the reader: “Regarding the Newmont-Goldcorp-Barrick M&A drama — aside from the geopolitics of sending American gold to China, the answer to this question might also depend on what Treasury Secretary Steve Mnuchin really meant in August 2017 when he said, ‘I assume the gold is still there.’

“That was his infamous quip when he and his bride arrived at Fort Knox to visit the U.S. Bullion Depository. As if that comment didn’t inspire enough confidence, Mr. Secretary later tweeted, ‘Glad gold is safe!’

“It was good of him to confirm this, no? Unfortunately, he didn’t actually state that the gold was there.

“So maybe somebody else already has most of America’s gold; and we should protect what we still have (regardless of whether it’s above the ground or still in it). I know, this used to be one of those tinfoil-hat theories. But our gubment leaders are doing an awfully sorry job of disproving it.

The 5: Secretary Mnuchin’s comments when visiting Fort Knox did nothing to inspire confidence. Puts us in mind of Gertrude Stein’s bon mot: “There is no there there.”

P.S. A 25-year investment insider has come forward with this urgent announcement to American seniors.

You can view it today, March 7, by clicking right here.