One of the fastest-growing “sports leagues” just made history… 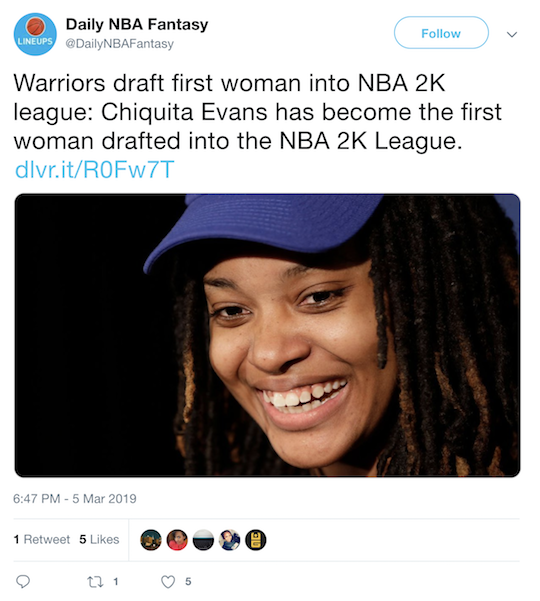 And what is that, you ask?

“NBA 2K series is a series of basketball sports simulation video games developed and released annually since 1999,” says Wikipedia. Its partners are the NBA and the gaming company Take-Two Interactive.

Seventeen of the NBA’s 30 teams have their own NBA 2K teams now — including the Golden State Warriors, whose Warriors Gaming Squad chose Ms. Evans in the fourth round of last night’s draft.

“It changes everything,” she said. “It means everything to me.” She will relocate from Chicago to the Bay Area.

“A former college and semipro basketball player, Evans is now the esports league’s first female pro,” reports the Associated Press, “one of the 126 players who will make between $33,000–37,000 per season, plus benefits and team housing.”

“According to some estimates, the esports industry is estimated to grow from just over $850 million last year to more than $1.5 billion next year.

“And as esports grow and evolve, so too will businesses to support them.”

Indeed, “a whole new generation of millionaires will be minted from the vast opportunities and growth in the esports industry,” James believes.

“Most importantly, since this market is still in its infancy, the opportunities to get in at the bottom are countless.”

But maybe not for long. James anticipates an announcement for a major corporation any day now, powering massive gains for a smaller business partner. “This little-known company could deliver fast movers a shot at a $1.9 million payday.”

Click here and James will lay out the opportunity before you. There’s no long video to watch. Just make sure you do so before midnight; this opportunity is time-sensitive, for sure.

The major U.S. stock indexes are losing ground as we approach the midpoint of the week.

The big economic number of the day is the trade deficit — which swelled in December to $59.8 billion, way more than expected and the highest monthly total since October 2008. Exports were down, imports were up. The full-year 2018 trade gap totals $621 billion — also the most since 2008.

The financial media have been quick to point out this outcome isn’t exactly what Donald Trump was expecting when he launched a trade war in earnest early last year.

What they fail to point out is that many companies stepped up their imports of foreign goods, especially from China, in anticipation of tariffs that would raise import prices. Stocking up while prices were still low, in other words. So the 2018 numbers don’t tell the whole story.

A study by four economists — three in academia, one at the World Bank — reckons that consumers have been stuck with $69 billion in added costs because of the tariffs. So it’s not foreign governments bearing the costs as the president always says.

Really, that should go without saying. Tariffs are a tax that importers will inevitably pass along to customers. Indeed, the researchers say the tariffs resulted in $39 billion in extra revenue for Uncle Sam last year.

Not that that helped reduce the budget deficit, but that’s another story for another time…

For the moment, however, the Midas metal languishes at $1,286.

The vampire squid also sees silver at $17 six months from now; this morning the bid is a hair above $15.

There’s a fascinating Chinese wrinkle to the merger mania in the gold mining biz.

As we’ve chronicled in recent days, No. 2 player Newmont is acquiring No. 5 player Goldcorp… while No. 1 player Barrick has launched a hostile takeover bid for No. 2 Newmont. (No, this won’t be on the test.)

Our Jim Rickards expects both deals to close. “There are customary corporate finance reasons for these mergers,” Jim tells us, “including economies of scale, diversification of assets by country and higher share prices as fixed costs are spread over a larger reserve base.”

But don’t overlook the geopolitical angle, Jim goes on: “Barrick is a Canadian company and has close relations with the Chinese government through its executive chairman, John Thornton. While China does not control Barrick, the close relations combined with Barrick dominance of Newmont and Goldcorp gives China the inside track on future output from the new gold behemoth with minimal interference by the United States.”

Then again… Barrick and Newmont are the dominant players in Nevada’s gold-rich Carlin district. Would the antitrust division of Trump’s Justice Department sit idle as American gold in the ground gets shipped off to Chinese vaults? Stay tuned…

Here comes a new warning about the risk of a fire sale in corporate debt during the next economic downturn.

We started sounding the alarm late last year. In fact, we said corporate debt was the biggest threat to the markets in 2019. The Bank for International Settlements — sometimes called “the central bank for central banks” — agrees.

In a new report, the BIS warns of the explosion in corporate debt over the last 10 years that’s rated BBB — still considered “investment grade” but in reality only one notch above “junk,” with a high default risk.

The risk comes from the possibility that during an economic downturn, the rating agencies like S&P and Moody’s would downgrade much of that BBB debt to junk status. Such a move would force mutual funds and ETFs that hold only investment-grade bonds to sell the newly rated junk.

The BIS report warns this scenario “could force portfolio rebalancing in excess of daily turnover in corporate bond markets.” In other words, a panic that would likely spill over into stocks and other asset classes.

Scary figure from the BIS report: In 2010, BBB bonds made up about 20% of the holdings in investment-grade bond mutual funds. That number has exploded to 45%.

We repeat our warning from late last year: Look closely at the credit quality of the bonds in any bond fund you hold in your 401(k) or other accounts; Morningstar makes it easy, by clicking on the “portfolio” tab and scrolling down.

Two caveats about this corporate debt warning, though…

First, the fact that central bankers see trouble coming — here in the States, the Federal Reserve is issuing warnings as well — triggers our spidey sense that something else will set off the next crisis. Usually the catalyst for crisis is something the mainstream doesn’t see coming — to wit, their conceit in 2006 that housing prices never fall, or in 1999 that the internet had brought about a “new economy.”

Second, and we’ve mentioned this before: Regulators could easily step in and strong-arm the rating agencies, preventing them from issuing those well-deserved downgrades.

There’s ample precedent: As we mentioned on Monday, corporate accounting rules were eased 10 years ago so the big banks could make their balance sheets look better than they actually were… and that was one of the events launching an epic bull market still underway today.

For the record: The leading force behind a new wave of drug approvals is leaving the Trump administration.

FDA Commissioner Scott Gottlieb is stepping down — apparently because he’s tired of commuting between D.C. and Connecticut, where his family has remained the last two years.

As our biotech maven Ray Blanco has been quick to remind us, the FDA under Gottlieb has been good for biotech innovation. The agency has set records for new drug approvals two years in a row — 59 last year, 46 the year before.

On the negative side of the ledger, Gottlieb has waged a weird jihad against e-cigarettes — supposedly to prevent underage vaping — even as he acknowledged e-cigs are safer than regular smokes…

“Just want to say I agree with Dave,” a reader writes. We always like to start our mailbag on the right foot, heh…

Responding to a rant of your editor’s from several days ago, he goes on, “No one forced these companies to hand over anything to China. That was the deal if you wanted to play in their sandbox. When guests come to my home, they have to play by my rules. I don’t change the rules to suit them.”

Parenthetically, he adds, “My reply is late because I’m currently in Beijing and my VPN is a bit quirkier than usual since the ‘People’s Congress’ came to town.

“I’m here from Jan. 31 to March 31 dealing with some extraordinarily complex Chinese wedding procedures, rules and cultural requirements for my stepson. It involves two weddings. One with 500-plus guests and another with close to 2,500 guests. They are two days and just over 400 miles apart. It’s an unusual occurrence due to the prominence of the bride’s family.”

“Usually you guys are pretty accurate with your numbers,” a reader chides us.

“But on Monday you shared a screen grab that listed ‘Lefty’s’ weight at 200 pounds.

“Really? If that’s true then I’m wearing my Speedo to the beach this summer… You’ve been forewarned!”

The 5: The 5 bears no responsibility for the accuracy of the information in that screenshot from the Masters website!

We also heard from a reader in Arizona who’s nearly certain Phil Mickelson calls Scottsdale home. “He’s always in the news and sports down here.” Indeed, he grew up there and his alma mater is Arizona State.

Arizona’s top income tax rate is 4.54%, imposed on taxable income above $155,160. That’s a darn sight better than California’s top rate… but if Mickelson formally changed his domicile to Arizona for tax-filing purposes, he’s kept it quiet.

Given what happened when he piped up on the subject of taxes six years ago, that’s probably wise…

P.S. James Altucher hasn’t been this excited in a long time. “This tiny, little-known company is the critical linchpin of a ‘Social Media Killer’ that could soon replace Facebook, Twitter and Instagram on Wall Street.”

Jump in early enough and James says you could notch a $1.9 million payday. You’ll see how he arrives at that figure when you follow this link.

Fair warning: For reasons that will be obvious when you click here, this research will be taken offline at midnight tonight.