“Benched” Cash Gets Back in the Game

“We’re nearly eight weeks into the new year and the S&P 500 is up 11.2% so far,” says our income specialist Zach Scheidt.

And small caps? Even better — returns are up 15% this year.

“Those are solid returns for a full year of trading,” says Zach, “let alone a few weeks.” Indeed. When the market’s moving with such upward momentum, though, investors inevitably ask: “How long can the rally last?

“That’s the same question people have been asking about this bull market since we first started moving higher from the 2009 low,” Zach says. “The old Wall Street phrase ‘The market climbs a wall of worry’ is definitely true.”

After the market’s snappy recovery from December’s doldrums, “it makes sense to consider whether we really are reaching a peak this time.

“Of course no one has a crystal ball to know exactly where stocks are going to trade on a day-by-day basis,” Zack continues.

“The news has been priced into U.S. equities,” says John Davi CIO at Astoria Portfolio Advisors. “But if you take a step back, positioning is still pretty light in U.S. equities, so even though we think everything is priced in, we could rally a little bit more.”

Good to know… and Zach agrees.

“Big hedge funds and pension funds currently hold a significantly lower allocation to stocks than they have historically.

That’s a very good indicator for the market: A lot of sidelined cash will — in due time — make its way back into the stock market.

“In fact, with the market rallying so quickly this year,” Zach says, “investors who are not fully invested in the stock market are falling behind their fellow investors.”

Which should be of particular concern for pro money managers who oversee hedge and pension funds.

Money managers are sized up based on overall returns compared with set benchmarks; if stocks continue to move up and to the right and these funds don’t have enough exposure, institutional pros will get left out in the cold. (No bonus for you… or worse.)

“To keep their jobs,” Zach says, “many professional investment managers will need to invest more cash in stocks.

“And they’ll use any short-term pullbacks to buy new positions.” Hmm… pullbacks like yesterday?

“That’s why I don’t expect the current stock rally to end anytime soon,” he continues. “There’s just too much cash waiting to get into the market for stock prices to fall too much.”

[Ed. note: With all this cash waiting to flow into the markets, you’ll want to take advantage of bargain stocks… while they last.

It might make you question EVERYTHING you know about income paydays… including Social Security payments.

FINAL CHANCE to claim your “One Day Bonus”: This page will be removed from the internet

Will you cash a huge check after reading THIS?]

Despite optimism about the trade war, yesterday the Dow ultimately ended 200 points down; today it’s barely budged — 3 points down, to 25,816.82.

“This new leverage among world energy providers is specifically due to increased yields from the Permian Basin.” Located in western Texas and southeastern New Mexico, this sedimentary field is a huge oil- and natural gas-producing area.

“In the past,” Mike says, “oil rigs were assembled to tap one well at a time. When that well went dry the rig would be disassembled and moved to the next drill site.

“Now, using advanced technologies, drillers can set up one rig and tap multiple wells at the same time.” Not only that, but AI-powered mapping allows drillers to target wells with “pinpoint” accuracy, says Mike.

“Reducing costs without impacting production is the perfect recipe for profits for U.S. oil companies in that region.

“I expect many small-cap and midcap companies operating in our Permian Basin region to do very well in the future,” Mike continues.

Unlike drillers in West Texas and New Mexico, OPEC and Big Oil aren’t utilizing the latest technology, wasting precious time and money in the process. A portent of things to come for OPEC and the like but a big break for U.S. oil producers.

“For my money,” says Mike, “the most straightforward way to tap into the States’ newfound energy dominance is with the PowerShares Dynamic Energy Sector Portfolio ETF (NASDAQ:PXI).

“PXI is a great way to gain exposure to U.S. companies in the energy production and exploration space,” he says. 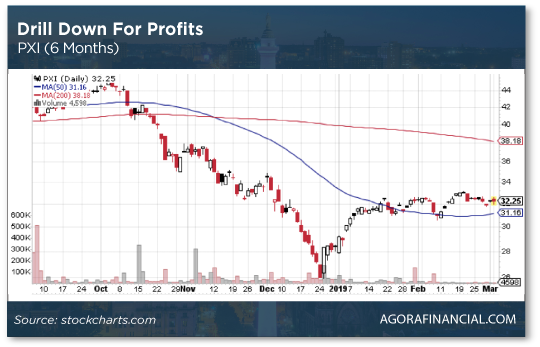 “You can see how PXI bounced off deeply oversold levels in January. PXI is now more than 20% from its lows,” says Mike. “It even jumped above its 50-day moving average two weeks ago for the first time since October.

“The stock is ‘coiling’ nicely right now, which could mean a breakout is coming soon.

“If you believe in West Texas crude,” says Mike, “you should believe in this ETF too.”

“As trade wars were positive for the U.S. dollar and negative for the gold market,” says an article at Investing.com, “their conclusion should bring reverse effects.”

Just take a look at the chart below… 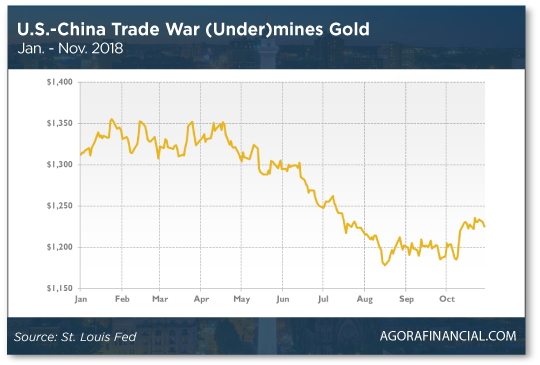 “Between April and September, where trade wars were the most intense, gold significantly declined.

“Gold bulls should welcome all positive news about the trade deal,” the article continues. But the yellow metal’s on a razor’s edge when it comes to trade war commentary: “too positive, and [it can] spur too strong risk appetite, which is usually negative for safe-havens assets.”

“It’s an epic battle of corporate egos,” says Jim Rickards about the power struggle between Barrick Gold and Newmont Mining.

In one corner, you have Canadian mining company Barrick that’s already merged with Randgold last fall; in the other corner, you have American company Newmont Mining announcing a merger with Goldcorp.

About a week ago, “Barrick announced a hostile takeover move for Newmont — at NO premium to the recent market price — and totally dissed the Newmont-Goldcorp play in the process,” says Jim.

Commenting on Newmont’s plan to acquire Goldcorp — “paying a 17% premium to Goldcorp shareholders for mining assets” — Bristow says: “It strikes me as desperate and bizarre.”

“Look at our record of good delivery and Barrick’s destruction of value.”

“No love lost here,” Jim concludes. “This drama will play out over time, and it’s going to be good.”

Plot twist: The latest on Philly’s soda tax… and how its origin resembles an episode of The Sopranos.

Officialdom presumably wanted to discourage Philadelphians from drinking sugary soft drinks that contribute to obesity and, at the same time, generate revenue for social programs like pre-kindergarten.

“But now there’s a third possible explanation for the soda tax, and it’s downright crazy,” says an article at Reason: “a political hit job executed by one of the city’s most powerful union bosses against a rival union.”

At least that’s what’s emerging from a federal indictment against John “Johnny Doc” Dougherty, longtime union boss of the International Brotherhood of Electrical Workers (IBEW) Local 98 “and one of — if not the — most powerful political operators in the city,” Reason says. 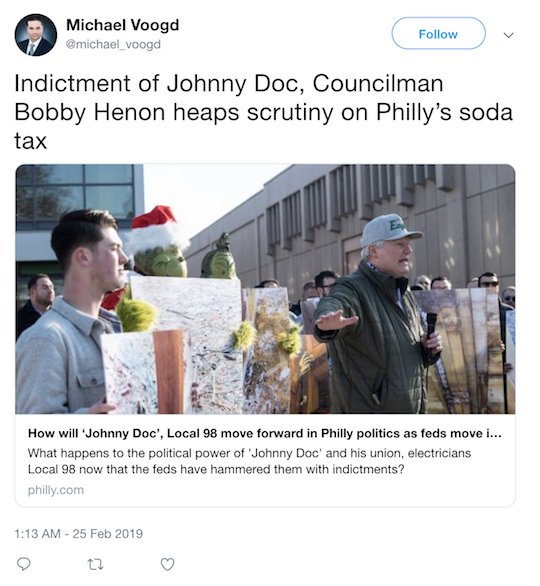 Outlined in the 116-count indictment, Dougherty lobbied friends on the city council — including Councilman Bobby Henon, who’s also been charged — “to pass the soda tax as retribution against the city’s Teamsters union.”

Johnny Doc’s beef with the Teamsters? They didn’t back the IBEW’s candidate for mayor, Jim Kenney.

Even though Kenney won the mayoral race, Dougherty wanted revenge, allegedly telling an unnamed IBEW source: “Let me tell you what Bobby Henon’s going to do… They’re going to start to put a tax on soda again, and that will cost the Teamsters 100 jobs in Philly.”

For his part, Mayor Kenney claims he was unaware the soda tax was part of an elaborate scheme to stick it to the Teamsters.

Which is doubtful considering the mayor “has known Dougherty since childhood, attended high school with him and came up through the trenches in the city’s political wars,” notes Philly.com.

As for Councilman Bobby Henon, “who pushed the soda tax through the city council,” Reason says, he’s being “charged with having accepted more than $84,000 in cash and gifts from Local 98 in order to do the union’s bidding on the city council.”

All to say, the soda tax is a dirty business… and would have been worthy of at least a two-episode arc on The Sopranos. It’s got everything: a gritty city, dirty politicians and a vengeful union boss.

Here’s how you can claim your own “One Day Bonus”…

But you must act before Thursday, March 7, at MIDNIGHT…

Before this page is removed from the internet.