Going Nuclear (NOT a Figure of Speech)

Trivia-obsessed U.S. media are so fixated on Michael Cohen’s testimony to Congress today that they’re overlooking the real possibility nuclear war could break out within days.

Every few months in The 5, we take note of some development or other on the border between India and Pakistan — just because no one else will. It’s a festering conflict the veteran foreign reporter Eric Margolis has called “the world’s most dangerous crisis.”

That said, we’re nearly certain this is the first time we’ve seen fit to make it our lead item. That’s how big a deal it is. If it went nuclear, there’s no telling what the impact on the economy and the markets… or your day-to-day existence… might turn out to be…

“It is almost unprecedented for two nuclear-armed countries to carry out air strikes into each other’s territories,” reports the BBC’s correspondent in Delhi… and yet that’s what’s happened in recent days.

The trouble began two weeks ago — well, really it began in 1947, but we’re getting ahead of ourselves — when a suicide bomber killed at least 42 Indian troops in the disputed territory of Kashmir. India’s government held Pakistan’s government responsible.

Events have escalated to a point that overnight the Pakistani government claimed it shot down two Indian military jets and captured a pilot.

“India and Pakistan, both nuclear-armed, have fought four wars over divided Kashmir since 1947,” Mr. Margolis explains. That’s when the Indian subcontinent won independence from Britain.

Kashmir is a majority-Muslim territory. Two-thirds of it sits in Hindu-majority India. The other third lies in Muslim-majority Pakistan. 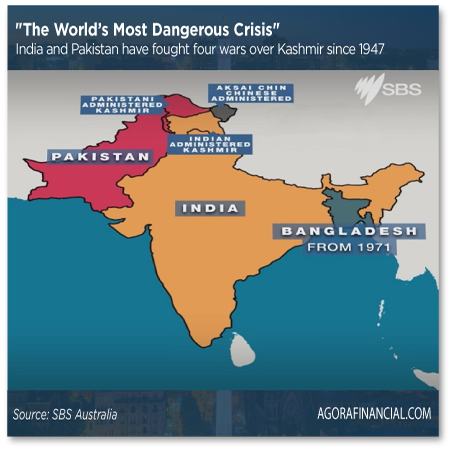 India’s conventional forces would overwhelm Pakistan’s in the event of all-out war. Pakistan’s only means of effectively fighting back would be tactical nukes. “Both sides’ nuclear forces are on a hair-trigger alert, greatly increasing the risks of an accidental nuclear exchange,” Margolis writes.

“Rand Corp. estimated a decade ago that an Indo-Pak nuclear exchange would kill 2 million immediately and 100 million in ensuing weeks. India’s and Pakistan’s major water sources would be contaminated. Clouds of radioactive dust would blow around the globe.”

A more recent estimate by Physicians for Social Responsibility pegs the numbers at 20 million dead in the first week and 2 billion from the resulting global famine.

So that’s a thumbnail sketch of both the background and the latest developments. If you want to know more, Google is your friend. Or you can read Margolis’ excellent book War at the Top of the World — complete with his firsthand accounts of getting shot at along the “Line of Control” in Kashmir at 16,000 feet above sea level.

Gold, which usually jumps on news of “geopolitical tension,” is suspiciously quiet today — indeed, it’s down about eight bucks at $1,320. 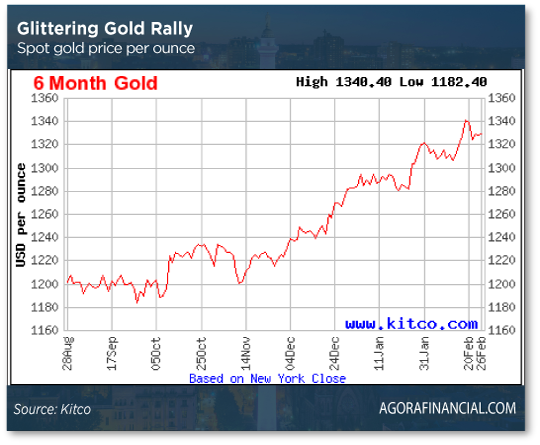 “While this is encouraging to gold investors, the evidence is that this rally is just part of a much larger bull market in gold that has years to run,” says Jim Rickards.

Credit for the recent rally goes in large part to the Federal Reserve — and its rather dramatic reversal of policy late last year and early this.

More from Jim: “On Oct. 3, Fed Chair Jay Powell gave a speech in which he said, ‘We’re a long way from neutral now…’ That was a clear signal the Fed intended to keep raising rates. Stock markets promptly tanked and entered full bear market territory by Christmas Eve.

“After Christmas, the Fed realized its blunder and switched to easing in the form of a pause in rate hikes. Jay Powell used the word ‘patient’ on Jan. 4. ‘Patient’ is Fed-speak for ‘no rate hikes until further notice.’ A March 2019 rate hike is now off the table.

“Then the Fed let it be known they would likely discontinue their balance sheet reductions by the end of 2019. This added to the notion that the Fed was in full-scale easing mode as a form of damage control in the face of economic slowing.”

But longer-term factors are also behind the rally… and they’re all about supply and demand.

Supply of physical gold has “flatlined” of late, says Jim. Meanwhile, demand is growing, “mainly due to large-scale bullion buying by Russia and China.” And as we pointed out a few weeks ago, demand for gold by global central banks last year was its highest since 1971 — the year President Nixon cut the dollar’s last tie to gold.

It’s Jim’s view that gold began a years-long rally from a bottom at $1,050 in late 2015. It’s up about 25% in the three years and change since — which tracks nicely with a previous bull market for gold.

“Based on the prior two bull markets, the new bull should run until 2025 or later and should achieve prices of $15,000 per ounce or higher.”

Stocks are slipping today as traders watch testimony before Congress — and we don’t mean Michael Cohen’s.

U.S. Trade Representative Robert Lighthizer told a House panel that “much remains to be done” on a trade deal with China… and Washington’s issues with China are “too serious” to be fixed by Beijing simply buying more U.S. goods.

With that, the Dow has slipped back below 26,000. The other major indexes, less exposed to global trade flows, are also in the red but not as much.

So much for the slump in crude prices.

We didn’t even bother taking note of a presidential tweet on Monday chiding OPEC for oil prices that are “getting too high.”

Oil prices tumbled 3% in response… but have made up all of that this morning with the weekly inventory numbers from the Energy Department. U.S. stockpiles fell 8.6 million barrels in the week ended last Saturday. The “expert consensus” of analysts polled by Reuters were expecting a 2.8 million barrel increase.

At last check, a barrel of West Texas Intermediate has rebounded to nearly where it was before the tweet, at $57.24.

How strong is the job market right now? Strong enough that the entire staff of a Sonic drive-in in Ohio quit… and felt comfortable burning their bridges with this sign in the window… 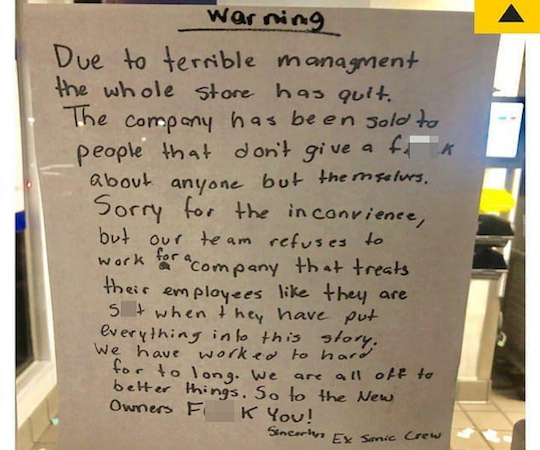 That was last week in Circleville, a little southwest of Columbus. The area’s newspaper, The Scioto Post, reports similar walkouts in nearby Lancaster and Grove City.

Seems the franchisee sold all three stores to Sonic corporate. The paper cites an anonymous source as saying, “The regional director, two district managers and four general managers have all been let go. All of which have been working for the company in management for seven-plus years.” 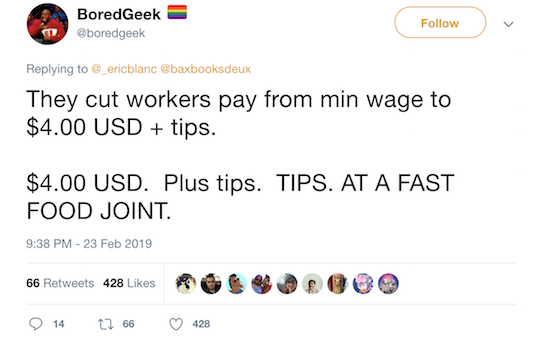 As we understand it, all three locations — and five more in the region that were also bought out — have reopened under new management this week.

On the subject of the new tax law’s impact this tax season, a reader writes…

“Having filed my taxes manually for the past four decades (yes, call me crazy) I was looking forward to the simplified 2018 changes; that is until I read through the publications and forms.

“Turns out the ‘simplifications’ were nothing more than a shell game. I had to laugh out loud when I discovered all they had done was chop up the old 1040 form and move it around to five new forms — the new 1040 form along with new Schedules 1–4. Voila! New, improved and simpler! Are you f’ing kidding me!

“Leave it to bureaucrats intending to simplify something yet winding up making things worse. Good grief, we really do need to press the reset button on this country starting with the legions of minions in the gubmit…”

“I thought from the beginning there would be no significant trade war with China, and I still feel that way,” writes one of our semiregulars.

“Jim Rickards used logic to predict a trade war, but, and my apologies to Trump supporters, I think normal logic has nothing to do with it.

“Trump wants to be the greatest president ever. One of his main measures is the stock market. The stock market does not want a trade war. Ergo, no trade war. Another example is Trump complaining about the Fed raising interest rates.

“And of course China does not want a trade war. Pretty much everyone agrees with that. So something will be worked out to make both sides look like victors. Just like with NAFTA.”

The 5: Maybe. But you underestimate the degree to which both the Beltway establishment and big business are turning against China.

Sentiment within the “Deep State” is slowly starting to align with that of the hard-core right-wing China bashers: “We bent over backward for nearly three decades to bring China into the ‘liberal international order.’ We gave most-favored-nation trade status. We brought China into the World Trade Organization. We did all this in the expectation China would become more democratic and more Westernized, and what happened instead? They’ve become more autocratic, more authoritarian, and Xi Jinping is setting himself up as president for life.”

As for big business… Time was the U.S. Chamber of Commerce and similar groups would object to any talk of protectionist measures against China. As recently as last summer, the Chamber of Commerce was denouncing tariffs. But last week the group’s executive vice president said if there’s a trade deal and China doesn’t keep its side of the bargain, “snapback” tariffs would be a desirable remedy.

This change of heart in the business community is breathtakingly cynical.

Your editor is sick unto death of American CEOs complaining about “intellectual property theft” and “forced technology transfers” on the part of the Chinese.

Hey, Mr. Bigshot CEO: No one held a gun to your head. You made the conscious decision 15, 20, 25 years ago to do business in a country where there’s no “rule of law” as we Westerners would understand it.

You decided to throw caution to the wind anyway because the growth potential of the Chinese market was so freakin’ huge that you felt you couldn’t pass it up.

But now the great Chinese growth engine is starting to sputter. The GDP numbers are their weakest in 30 years. Your gravy train is coming to an end.

And it’s at this moment you come whining to Washington about how the Chinese aren’t “playing fair”? You want me as a U.S. citizen and taxpayer to take the hit for the decisions you made and pay higher prices for Chinese goods via a tariff? Get bent.

P.S. Here’s something that could have a bigger impact on the markets and your retirement than Michael Cohen’s testimony or even the Mueller report once it’s out.

Our resident investment-banking insider says it could hit as early as midday tomorrow. Check out her urgent message right here.