Oh no, not again: “Wild Week Ahead,” said a Bloomberg headline last night.

“A U.S.-China trade deal is in the making. Theresa May will try to keep Brexit on track. Donald Trump and Kim Jong Un meet in Vietnam. Jerome Powell and Michael Cohen are set to testify before Congress… There will be plenty of opportunities for risk to hit markets in the coming days.”

Bloomberg pulls a headline like this every few months. Last June it was “Brace for the World Economy’s Most Important Week of the Year.”

That article also had a laundry list of “opportunities for risk to hit markets.” At the time, we said no one would remember any of them even a few weeks later. (You can examine that episode of The 5 — complete with a cute cat picture and our take on the QAnon phenomenon — and judge for yourself whether we were right.)

The Chinese stock market leaped 5.6% today after an announcement that…

… the can of U.S.-China trade talks is being kicked down the road.

This Friday was supposed to be the deadline for those talks to reach some sort of resolution, else U.S. tariffs on a host of Chinese goods would rise from 10% to 25%.

But last night Donald Trump announced the increase is being “delayed” pending a face-to-face meeting with China’s President Xi Jinping.

The reaction in the U.S. stock market is a bit more muted. Still the Dow is up more than three-quarters of a percent as we write, at 26,238. The S&P 500 and the Nasdaq are also solidly in the green.

This exercise in can-kicking is the “best-case scenario” for the trade war, according to our Jim Rickards.

As he wrote his readers last week, “The best case is that the deadline will be extended and the trade talks will continue. The worst case is that the truce will fall apart and the U.S. will impose massive tariff increases on Chinese exports to the U.S. as planned.”

Last spring, we asked Jim what U.S. victory in a trade war would look like. What would be a good “deal” from the standpoint of Trump and his advisers?

His answer: The Chinese would “buy more stuff directly from us (such as soybeans, aircraft, other agricultural products, etc.). This comes at the expense of other providers such as Canada, South Korea, Europe and Brazil. Too bad for them.”

But according to one of the most astute China watchers out there, Trump’s tariffs have already made that kind of deal a nonstarter.

Chas Freeman is a veteran U.S. diplomat whose accomplishments include serving as the lead translator for President Nixon during the summit with Mao Zedong in 1972. This is a guy who’s seen the “thaw” in U.S.-Chinese relations from Day 1.

“Food security has been an obsession for every Chinese state over the course of the last 2,500 years,” he said two weeks ago in Florida at the St. Petersburg Conference on World Affairs.

After the experience of tariffs the last year, “No responsible leader in China is again going to commit his or her country to long-term dependence on the U.S. for its feed-grain, wheat, corn, cotton, pork or fresh fruit supply.

“Erratic behavior in business makes one the supplier of last resort. Whatever the short-term outcome of the trade war we launched against it, in future China is going to look elsewhere for critical imports.”

That sure doesn’t look like victory as Team Trump would define it.

Next on Bloomberg’s list is Brexit — which we’re trying to care about, but it’s not working.

Brexit was fun and exciting when the vote took place in the summer of 2016. The pants-soiling panic after the shock outcome — well, it wasn’t a shock if you were reading this e-letter — sent gold to $1,375, among other big market moves. (Gold trades at $1,327 this morning.)

Now? Britain is set to depart the European Union on March 29. But the terms of that departure — especially the border between Northern Ireland and the Irish Republic — are still in flux. The endless negotiations and posturing have turned Brexit into the most boring financial crisis since Greece a few years ago.

It’s bad for the British pound, but otherwise the market impact seems limited as the crisis drags on indefinitely with the same dreary cast of characters.

Really, how is Theresa May still the prime minister? Her margin of “victory” in a no-confidence vote last month was narrower than Margaret Thatcher’s in 1990… and Thatcher had the grace to resign!

As for the Trump-Kim summit, we wish only success — unlike most of professional Washington.

During the previous summit in June — also taking place during a “pivotal week” for the markets and the economy, heh — the media narrative was “Trump is getting played!”

But as we pointed out, the biggest driver of the peace process on the Korean peninsula wasn’t Trump or Kim, but rather South Korean President Moon Jae-In. If you read mainstream news, however, it was as if the South Koreans didn’t exist. Ditto for most of the Beltway class.

That has now changed — and not for the good. Congressional Democrats are now openly dissing the South Koreans for daring to have a say about events in their own backyard.

Last week, House Speaker Nancy Pelosi hosted a group of South Korean lawmakers from both the ruling and opposition parties. She browbeat them about how they shouldn’t trust the North and that the Trump-Kim summit last year was “nothing but show.”

“The implication,” writes Tim Shorrock in The Nation, “was that the South Koreans, who have had extensive discussions on economic, political and military issues with their Northern counterparts over the past year, are naive and don’t understand the threat to their own country.”

As long as we have geopolitics on the brain, here’s something that should be on Bloomberg’s list but isn’t — Venezuela.

Meanwhile, there’s a ginned-up drama on the Colombia-Venezuela border over a shipment of “humanitarian aid” from Washington, which Maduro is refusing to let in.

Gee, could that be because the Trump administration’s point man on Venezuela, Elliott Abrams, used “humanitarian aid” as a cover to ship weapons to Nicaragua’s contra rebels back in the ’80s? Naw, couldn’t be.

Remarkably, most Democrats have lined up behind Trump’s regime-change efforts in Venezuela — although most of them haven’t gone quite as far as Sen. Marco Rubio (R-Florida) in sheer bloodlust… 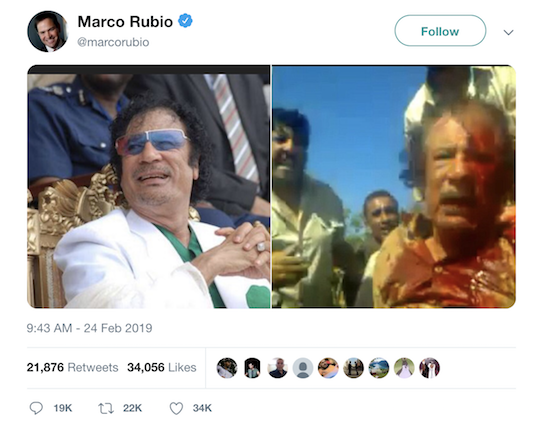 Those are before-and-after pictures of Libyan strongman Muammar Gaddafi — sodomized with a bayonet and shot to death by a roadside after the Obama administration engineered regime change in 2011. (Hillary Clinton: “We came, we saw, he died.” [Laughter.])

With Gaddafi gone, legions of hardcore jihadis flooded into the Middle East and West Africa to stir up trouble… Europe was inundated by a wave of refugees crossing the Mediterranean… and black African migrant workers who’d been protected by Gaddafi were sold into slavery.

If that’s what victory looks like to Rubio and the rest of the regime changers, we’d hate to think about a defeat.

We expect no surprises from Federal Reserve Chairman Jerome Powell’s testimony to Congress this week… but we hope someone will ask him about the Fed’s revised inflation target.

For years, the Fed had an unofficial inflation target of 2%. Which is to say the Fed purposely aimed to erode your purchasing power by 18% every decade. Evil, no?

This target became official policy in 2012. As evil as the policy is, the Fed has bungled the implementation — at least going by the Fed’s preferred measure of inflation. 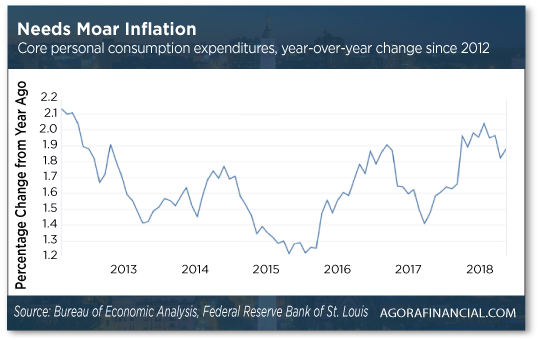 Having failed so miserably achieving even its own dunderheaded goals, the Fed is looking to adjust its approach, according to a Wall Street Journal article no one noticed because it came out over the weekend.

“With the current target,” explains the article, “the Fed aims for 2% inflation every year, no matter what happened the year before.”

But under one possible remedy, “if inflation undershot 2% one year, the Fed would try to catch up by allowing an overshoot in the next.” Under an alternative remedy, the Fed would aim for higher than 2% in good times to make up for what would surely be less than 2% in bad times.

Clearly, the Fed wants more inflation. Whether the Fed can achieve more inflation with a new approach is another matter altogether. To be continued…

Yes, there might be some salacious headlines… but nothing to move the impeachment needle.

Far more interesting will be the release of the Mueller report — which might be only weeks from now. The #Resistance crowd that’s practically elevated Robert Mueller to sainthood is having second thoughts now that it appears he’s come up with bupkis that would demonstrate “collusion” between the Trump campaign and the Kremlin.

To the mailbag, where tax season remains a hot topic…

“The California CPA is wrong,” says a reply to one of last week’s readers. “Households in the $100–200k income range may exceed the $10k threshold for SALT on average by $5–10k, which equals up to $2,200 in lost tax savings if married filing jointly, somewhat higher for single filers. But that is offset by the effective 3% tax cut. And, if they have children, by the doubling and limit extension of the child credit.

“Democrats would have a dilemma proposing SALT reversal. It would fly into their Green New Deal campaign. After all, the limits encourage a smaller carbon footprint from smaller homes.”

“As a paid tax preparer for a number of years and an AARP volunteer for several more years, I always found the W-4 form designed by the IRS to be unnecessarily complicated,” writes another.

“Most people have the same tax profile year after year (their combination of income, adjustments and standard or itemized deductions). I found a shortcut method years ago for those of us in that camp. Simply calculate the percentage of taxes paid on your taxable income during filing season and then make sure you withhold at least that same percentage for the next year. Works for me!”

And folks still want to weigh in on the cheeky online joke submitted by an Alabama resident to lower the national debt by selling Montana to Canada for $1 trillion.

“I live in Montana and it is a great state for sure,” says one. “Alabamans apparently settle for minimums when it comes to value!!! Canada needs to offer +$22 trillion to extinguish the entire U.S. debt. Then we’ll talk! Get a grip, ‘Tide’ man!”

Muses another: “Visited Montana recently… Wife spent part of her childhood there… Mule deer are dumber than whitetails… Wife and I can meet the immigration requirements… Weed would be fully legal… The current attitude toward cryptocurrency there isn’t too bad.

“I could move there. Might even lend them part of the trillion.”

The 5: At what rate of interest?

P.S. Congratulations to readers of Technology Profits Confidential — who collected a 127% gain last week on CyberArk Software, one of Ray Blanco’s picks in the cybersecurity space.

For access to Ray’s favorite technology names right now, you’ll want to give this a look right away.