Got goals for 2019? If you’ve made some New Year’s resolutions, there’s probably one — or more — on the list that includes money.

The chart below shows about 33% of Americans have resolved to do better with money: 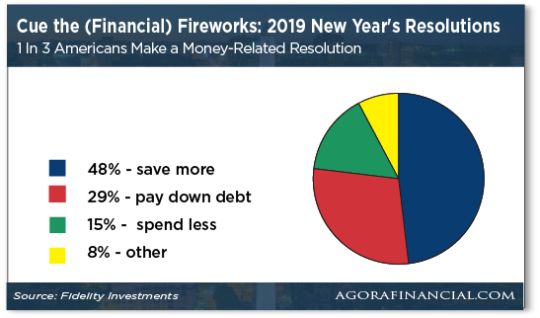 Looking at the chart, 8% of those surveyed who responded “other” might have the following goals in mind:

“The financial freedom to travel…”

“The bottom line,” says our analyst Greg Guenthner, “is you are looking for consistent profits.”

And those have been hard to come by since the market hit heavy seas since September’s highs — even missing out on the customary “Santa Claus rally” some investors were banking on.

In short, Greg says, “The stock market is breaking down.”

“Just look at this market recap I dug up from January 2016:

U.S. stocks closed sharply lower Friday, locking in the worst 10-day start to a calendar year ever, as oil prices plunged and investors worried about slowing growth in the U.S.

“An oil crash, growth worries and a plunging market — does this sound familiar?” says Greg. “These same concerns are dragging down stocks right now.”

Add to that list a government shutdown (with the threat of another to come), trade war worries, a sluggish housing market and an unpredictable Fed… and you’ve got yourself a potential dumpster fire.

“But when the worst-case scenarios don’t materialize and the last seller turns out the lights,” Greg says, “stocks will bottom… and a new rally will begin.”

“After a rough start [to the year], I believe the major averages will bottom out and embark on a new uptrend at some point in 2019.”

To justify Greg’s forecast, he offers a chart from what he believes to be 2019’s *approximate* doppelganger — 2016: 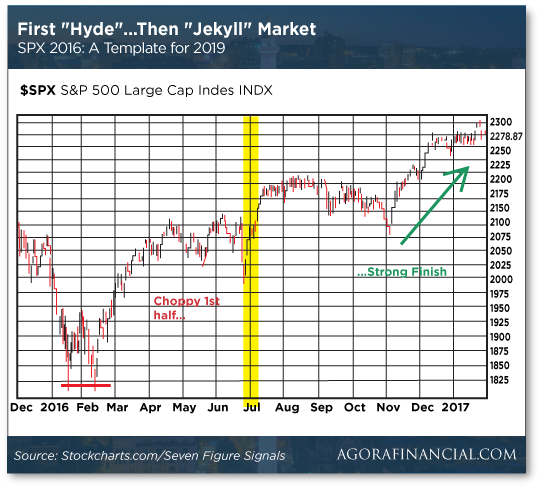 “Again, I don’t think stocks will perfectly follow this pattern,” Greg continues. “But we’ll use it as a rough guide until we’re proven wrong.”

Greg’s not the only one who thinks 2016 is an apt indicator of how the markets might react this year.

“This year started with bang,” says MarketWatch, “a kind of bang that’s only been heard five other times since 1987. The last three bangs, or signals, turned out to be major buying opportunities. What about this time?”

The signal the article cites is called a double breadth thrust (no, it’s not a swim stroke… heh), which occurs when 85% or more NYSE-listed stocks experience “up” days in a two-week period.

And that’s happened just five times in the last 32 years: 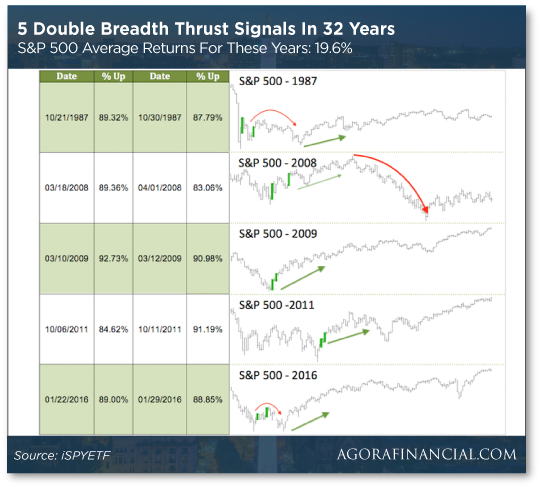 “The image [above] lists the exact dates and percentage of advancing stocks,” says MarketWatch “The thumbnail charts next to the dates highlight the actual breadth thrust (green bars) and how stocks performed over the next six months or so.

“I think ‘max pain’ might be a choppy market environment for the immediate future,” Greg says.

“I also wouldn’t be surprised if the averages rolled over and tested the lows,” he continues. “But there’s some buying under the surface that has me cautiously optimistic.

“Even if we are forced to endure some pain, I think we’ll see a sustainable rally later this year (third or fourth quarter).”

[Ed. note: Greg’s crack market analysis at PSA Whisper Trades will be ready to adapt to whatever the market gives us this year.

And after spending hundreds of thousands of dollars developing this new patent-pending trading breakthrough — that’s set to make millionaires — Greg says: “Our aim is to deliver you consistent profits by following powerful market-sentiment indicators.”

So start making good on your financial New Year’s resolutions… Just set aside 90 seconds to watch this video right away, because it could change the rest of your life.

But because of the confidential nature of this short video, it will be removed from the internet TONIGHT at MIDNIGHT.]

James is well-acquainted with Blockchain Industries: “I spoke at their biggest conference last year,” he continues. “If the takeover happens, other crypto companies will quickly follow suit.

“This creates a great opportunity… as we’ll be able to trade cryptocurrencies on the stock market.

“Second, I’m looking at a new project called UMA,” James says. “It hasn’t launched yet, but it’s getting close.

“The UMA team has created a great way for anyone, anywhere to design and build their own universally accessible financial products. This would also apply to any real-world assets.”

Bad news? Not necessarily. “The reason for this is simple: the government shutdown,” James says.

“The CBOE didn’t want to risk being rejected when they have such a strong case. They’ll re-submit once the shutdown is over.”

The same can be said for the pipelined VanEck bitcoin ETF. “The SEC is affected by the shutdown… And so instead of trying to slip through or something, we just had the application pulled and we will re-file and re-engage in the discussions when the SEC gets going again,” says Jan van Eck, CEO of VanEck.

“The good news is that [the CBOE’s] move didn’t cause bitcoin’s price to drop,” says James. “That means that smart investors expect the ETF to ultimately be approved. When that happens, it will cause bitcoin to rise,” he says.

As always, James says “buy the dips” in bitcoin; his price target to initiate a buy is $2,600 right now.

“Between rogue states like North Korea, lone-wolf hackers and well-orchestrated attacks by Russian, Iranian and Chinese cyber warriors,” says our technology authority Ray Blanco, “cybersecurity is of the utmost importance to national security.”

For proof, look no further than the Trump administration’s inflection on the importance of building out 5G infrastructure without using Chinese-made hardware or software. Not only that, but Trump’s attempting to coerce other countries to follow suit.

“The Trump administration has conducted a campaign to pressure allies such as Britain, Poland and Germany to banish Chinese companies,” says The New York Times, “especially the telecommunications giant Huawei, from participating in the 5G buildup.”

Just yesterday, the Justice Department filed a 13-count indictment against Huawei, two of its affiliates and the company’s CFO, Meng Wanzhou; charges include bank and wire fraud, obstruction of justice and violating U.S. sanctions against Iran.

And this ought to be awkward… the U.S. resumes trade war talks (too much to ask for negotiations?) with China tomorrow. The Trump administration maintains the DOJ’s filing against Huawei has nothing to do with the trade war… but the Chinese beg to differ

Already — in response to the U.S. leaving Huawei out in the cold — Beijing’s threatened “serious consequences.” The meeting tomorrow should be frosty all the way around…

“The world is becoming more and more interconnected,” Ray says. “This makes us all the more vulnerable to cyberattacks.” How much more so during the government shutdown?

While the shutdown’s off — for now — NBC News reports: “Since the government shut down on Dec. 21, nearly half of the Cybersecurity and Infrastructure Security Agency workforce [had] been furloughed, while the rest [were] working without pay, according to a release from the Committee on Homeland Security.”

“When our nation’s cyber centers are not actively monitoring and protecting our most valuable assets and critical infrastructure,” says an article at TechCrunch, “threats magnify and vulnerabilities become further exposed.

“The obvious impact to you is that your personal data are at risk,” Ray continues. “Government websites could be hacked a lot more easily as security protocols fail to get updated.”

This is scary: “In mid-January… as of the 16th, 130 different web security certificates had expired on various government websites” [emphasis added].

If there’s a silver lining to this potential doomsday scenario, it’s for investors.

“It’s a target-rich environment for cybersecurity stocks,” says Ray. “Cyber stocks are bouncing back after the recent correction and look like they have a lot of upside potential left when looking at the chart for the PureFunds ISE Cyber Security ETF (HACK). 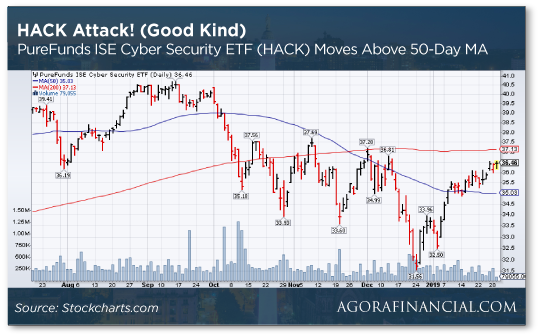 “As you can see above,” Ray says, “HACK has recently recovered enough to move above its 50-day moving average.

“And as we move through January we can see the price action is starting to coil like a spring, which very often leads to a big move to the upside.

“Overall demand in the space should be a boon for this sector,” says Ray. “Now and for the long run.”

(What?!?) While employees at the Cybersecurity and Infrastructure Security Agency were furloughed for the government shutdown (see above), a federal “plastic straw cop” was busy patrolling D.C. eateries.

In what universe does this make sense?

At D.C.’s Union Station on Jan. 8, Zach Rybarczyk, who works for the D.C. Department of Energy and Environment, made the rounds, citation letters in hand.

“Auntie Anne’s, past Johnny Rockets. At Lotus Express, a Chinese food joint, Rybarczyk peeled the wrapper from a red straw and bent the end — the telltale giveaway,” says The Washington Post.

Giveaway of what, you ask? Plastic!

That’s right: “Nine years after the District instituted a nickel tax on plastic bags and three years after it banned plastic foam food containers, it has turned on plastic straws…” (Even though, as we’ve reported before, the ban’s based on junk science.)

“… And it’s up to Rybarczyk… to enforce the new law.” (Say that in your best “In a world” movie trailer voice… heh.) 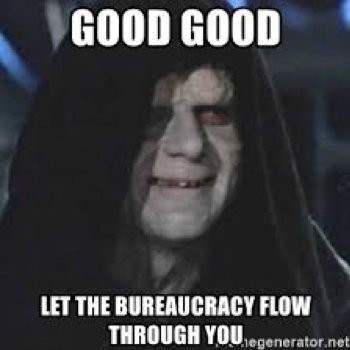 Yes… because nothing else flows through biodegradable straws.

The Post continues: “The straw cop left the rattled cashier at Lotus Express with a warning that if the store was still using plastic straws by July, when a grace period expires, it could be fined up to $800.”

One onlooker groused: “What, is this California now? All these laws are just spreading… Everything is getting taken away from us, man. This is so stupid.”

P.S. This urgent announcement from our publisher will only remain online until midnight…

You’ll want to watch it right away.

View it by clicking right here.

“American pharmaceutical companies will be able to compete with their foreign peers when it comes to developing cannabinoid-based therapies.”

Amid much noise in Davos last week was a chilling warning that should have been front-page news everywhere.

How To Stumble Into WWIII

How Trump Plans to Upend Pharma