Well… the glow from “easing” Federal Reserve policy and the end of the “partial government shutdown” didn’t last long.

As we write, the Dow has given back all its big gains from Friday and then some. Ditto the S&P 500. The Nasdaq sits more or less where it did before Friday’s run-up.

Do you detect a common thread? So do traders. Weak global demand, especially from China, is a good reason to mash the “sell” button.

As it happens, much of the chatter last week at the World Economic Forum in Davos, Switzerland, was about a “global economic slowdown” in general and Chinese economic growth being its weakest in nearly three decades.

We didn’t say anything about it, because you could have read that anywhere. Here we try to separate the news from the noise…

… And amid much noise in Davos last week was a chilling warning that should have been front-page news everywhere.

It came from David Lipton, “first deputy managing director” at the International Monetary Fund — the outfit our Jim Rickards says will ride to the rescue during the next global financial crisis.

Lipton is an acolyte of Robert Rubin, the ex-Goldman Sachs CEO and Treasury secretary. He’s nominally second in charge at the IMF, but as Jim told us here in 2016, Lipton holds more power than managing director Christine Lagarde “because the United States has a veto over all important actions by the IMF.” 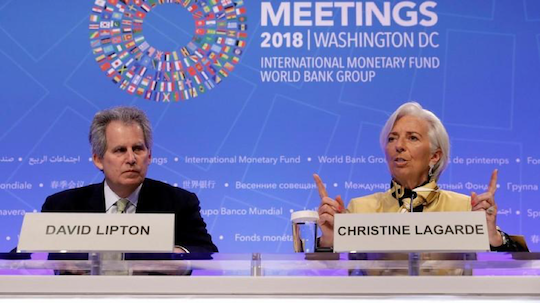 In other words, Lipton is a big deal in the global elite power structure even if he doesn’t grab the limelight.

Granted, he didn’t put it that bluntly. He used the boring, understated language that elites use when communicating with each other. “I fear that if at any time we have a worse than garden-variety recession, there will be anger and limitations in the way governments can respond.”

Specifically, he worried the Federal Reserve would be unable to extend the $1 trillion in “swap lines” to other central banks that it did in 2008 — an act the global elites are convinced prevented an even worse calamity than the one that occurred.

“For the Fed,” said Lipton, “this requires a fiscal backstop from the U.S. Treasury, and at the beginning there may be some reluctance. I wonder whether they will be so willing to extend the swap lines.”

There are several ways to interpret those remarks. One reporter in Davos — Ambrose Evans-Pritchard of the London Telegraph — took it to mean the Trump administration is liable to let the Europeans twist in the wind during the next crisis rather than lend them a hand. The global elites would indeed be very concerned about this prospect…

Our own interpretation is more dire, because it comes back to a point Jim Rickards has been making for years.

That is, during the next crisis, the Federal Reserve will have zero room to expand its bloated balance sheet.

In response to the Panic of 2008, the Fed quintupled its balance sheet via “quantitative easing” from 2008–2014 — buying up a metric crapton of Treasuries and mortgage-backed securities. 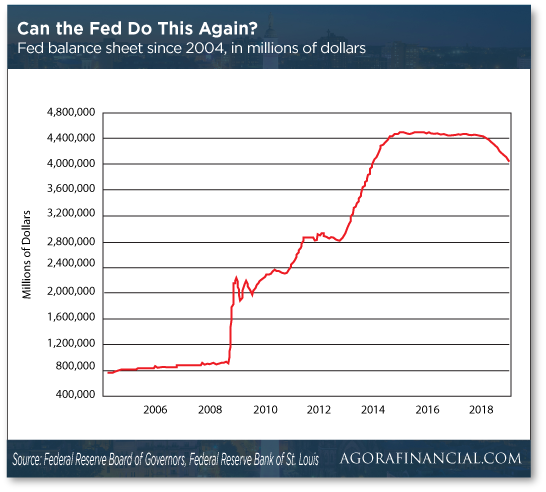 As you can see from the chart, the Fed began sloooowly selling off this debt in the fall of 2017. And as we mentioned on Friday, the Fed is already signaling it might be winding down those sales very soon.

In the event of another crisis, could the Fed just print another $4 trillion to bail out the fat cats? Or would the outrage from both the nationalist right and socialist left be too much?

Alternatively, would confidence in the dollar-based global financial system simply collapse? And then what?

That’s what Jim’s been warning about in his books for years — the next crisis overwhelming the Fed’s capacity to act. At that point, the IMF would step in. Its balance sheet is still relatively clean. It already has a super-currency called SDRs, or special drawing rights, that trades among governments and central banks.

It would be relatively easy to expand the use of SDRs to the biggest multinational corporations and other major dollar users. You and I, on the other hand, would continue to transact in dollars… but those dollars would quickly diminish in value, and not one person in a million would be able to explain how it was the IMF inflating us into poverty.

What can you do to prepare? Jim has long advocated keeping 10% of your portfolio in gold. Even in the most dire scenario, Jim says 10% will be enough to cover the downside of everything else.

And to help build up your asset base before that day arrives… you might want to execute a few well-placed trades using a system Jim helped to develop in conjunction with the CIA in the early 2000s.

It was only recently he was able to take the wraps off this system and show everyday Americans how to put it to work. Check out this interview with Jim right here. It’s available to watch now through midnight tomorrow night.

Gold pushed above $1,300 late on Friday for the first time since June, and it’s holding onto that level today. Not that it’s any help to the Maduro regime in Venezuela.

For the moment, Maduro clings to power despite the United States and several U.S. allies recognizing opposition leader Juan Guaidó as the acting president. But the money’s quickly running out.

To help keep body and soul together, Maduro wanted to withdraw $1.2 billion of gold the Venezuelan government has deposited at the Bank of England. But London has nixed that withdrawal at Washington’s request, according to a Bloomberg story over the weekend.

“The $1.2 billion of gold is a big chunk of the $8 billion in foreign reserves held by the Venezuelan central bank,” Bloomberg points out. “The whereabouts of the rest of them is largely unknown.” For its part, the Bank of England has no comment.

Hmmm… If you’re a longtime reader, you’ll recall Maduro’s predecessor, Hugo Chávez, made a huge spectacle out of repatriating $11 billion in gold bars held at the Bank of England and other overseas institutions. 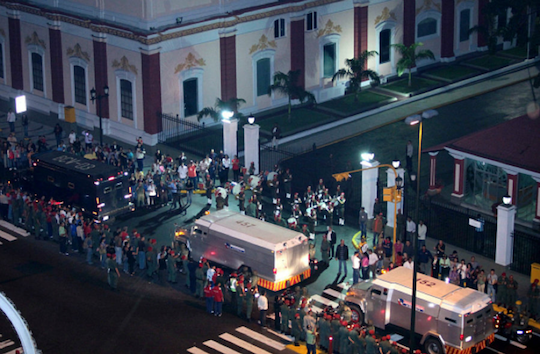 Chávez might have been an idiot, but he was no fool…

Maduro sold most of the gold in the years since to prop up the tottering socialist economy.

We daresay Chávez probably saw a day like this coming. The last chunk of Venezuelan gold still held overseas is now beyond Maduro’s reach.

You might not care for Maduro — certainly we don’t, even if we find Washington’s regime-change efforts foolhardy — but there’s a lesson in his plight. It’s the old Scottish saying about how possession is nine-tenths of the law.

On Twitter this morning, the aforementioned Jim Rickards remarked, “The only safe place to store gold is a vault that is not associated with a bank.

“When I was in Switzerland, the private vaults were adding capacity because customers were pulling their gold out of Credit Suisse and Deutsche Bank.”

With that in mind, we’ll have an announcement to make in a few more weeks. Stay tuned…

“Alexandria Ocasio-Cortez is probably a harbinger of the future United States,” a reader writes in a long and thoughtful email we’ve been sitting on for days, waiting for an opportunity to give it the time it deserves.

“The current cycle has gone about as far as it can go in impoverishing the workers of America while transferring assets to the wealthy class that currently runs and owns everything.

“Even though the idea of high tax rates is now a nonstarter for today’s elected officials, I think once the millennials use their voting power and we boomers die off, that the country must move to a more democratic-socialist structure or become a neo-feudal state for the mega-wealthy (on our current track).

“Seems that the Scandinavians are very willing to trade off the chance of mega-wealth for tax-supported health care, transportation, education, child care, universal pension plans — basically a solid floor so the middle class doesn’t end up living in tents and dying in poverty.

“I’m pretty sure the millennials and Gen Zers — many of whom are aware of how other societies function — will be more willing to have a less gaudy, more stable life for themselves and their children. They are already quite fed up with the way our government is run for the benefit of the wealthy and corporations and NOT for the people.

“Can’t anyone say, ‘BREAK UP THE MONOPOLIES’ anymore??

“Our current version of ‘capitalism’ in the U.S. has come to mean that out of the salaries of the working class, most of what used to be ‘disposable income’ has been sucked up by higher and higher payments to private-sector monopolies for ‘requirements of living’ such as health care, pharmaceuticals, a roof over our heads, transportation (a car in every garage), education for our children, not to forget TV/internet and cellphone packages, etc. And the provision of those goods and services by the private sector is no longer cheapest or best.

“The value of the ‘productivity’ of American workers is entirely taken for the benefit of the officers and shareholders of the owning class and not shared with the workers and consumers any more. We get stagnant wages and higher cost of living as our reward for years of hard work. Even trickle-down no longer trickles.

“Whether paid for by government taxing authority or out of our paychecks, I would take the bet that the Scandinavians pay substantially less in taxes for that package of universal coverage than it costs a working American to purchase those same ‘necessary’ goods and services from our ‘hallowed’ private sector. Free market economics is no longer at work in the U.S. The rise of socialist tendencies and ideas is only coming about because the ‘capitalist’ system we have is broken — not because the coming generations are lazy and want stuff for free. They work longer and harder for less than we ever did when we were their ages.

“You can’t just compare taxes paid; you have to look at what is provided in return for those taxes. In the Euro/Scandinavian model, high taxes pay for important benefits for everyone. In the U.S. model, our low taxes and high borrowing are nothing but a big wealth transfer from the working middle classes to the wealthy owning class. We have to rebuild along a different model or collapse. And yes, the Koch brothers would have to settle for being multi-multimillionaires instead of billionaires. My guitar gently weeps.

“Keep up the pithy commentary.”

The 5: As long as you brought it up, there’s another aspect of the Scandinavian model worth mentioning.

Sweden tried actual socialism a few decades ago — state control of the means of production — and had to dial it back because there wasn’t enough tax revenue to fund the welfare state.

P.S. Think about it. A freer market in exchange for cradle-to-grave welfare? In the crony-capitalist America of the 21st century, hollowed out by the health care and higher-ed cartels (to say nothing of the military-industrial complex), it’s an intriguing trade-off…

“American pharmaceutical companies will be able to compete with their foreign peers when it comes to developing cannabinoid-based therapies.”

“I think the early part of 2019 could look a lot like the market’s start to 2016,” says Agora analyst Greg Guenthner. Read what that means for the market going forward.

How To Stumble Into WWIII

How Trump Plans to Upend Pharma