“The coming year will be an exceptionally difficult one for the republic, perhaps even uniquely so,” writes an “anonymous friend” of John Robb — keeper of the always thought-provoking Global Guerrillas blog.

During the last few days of 2018 and first few of 2019 we’ve shared some of our editors’ forecasts for the year ahead.

We had Alan Knuckman’s reasons to stay invested in stocks… James Altucher’s case for no recession sthis year, Nomi Prins’ discussion of the most likely catalyst for a recession should one come about… Zach Scheidt’s outlook for more mergers and acquisitions… Ray Blanco’s “critical mass” moment for medical cannabis.

But at this time, it would be foolish to overlook the sociopolitical factors that could impact markets.

And no, we’re not talking about the kabuki theater of the “partial government shutdown.” We’re talking about, for lack of a better term, a new American civil war.

We’ve touched on the prospect once before — after Charlottesville in August 2017. We said the protests, counterprotests and murder-by-automobile weren’t exactly like Fort Sumter in 1861 — but maybe Harpers Ferry in 1859, or an earlier incident in “Bleeding Kansas.”

We cited Georgia State professor Jennifer McCoy. “When voters divide into opposing camps,” she told NPR, “they come to view the other side not any longer as a political adversary… but instead as a threatening enemy to be vanquished.”

When the process is underway, “Warring identities have concluded that the only solution is the complete submission of the enemy party, and both sides are beginning to prepare for an ultimate showdown,” Vlahos writes in The American Conservative. “Othering is a transforming process, through which former kin are reimagined as evil, an American inner-enemy, who once defeated must be punished.”

To Vlahos, the divide between “red” and “blue” America at this time represents “an irreparable religious schism, deeper in doctrinal terms even than the 16th-century Catholic-Protestant schism.”

Which brings us back to Mr. Robb’s friend who sees two “major streams of events” coming together this year — the 2020 election cycle and an effort to impeach Donald Trump.

“Imagine, if you will, the momentary hysteria of the Kavanaugh nomination,” this individual writes, “revived and extended into a permanent state, with a real sense of existential threat animating all participants. That is our probable 2019.

“This doesn’t stay inside the Beltway. This means heightened ideological conflict as a permanent feature of ordinary American life,” the writer continues.

“We haven’t seen much of this before — the strife of the 1960s and 1970s being fairly localized in many ways, and that of the 1860s being mostly regionalized — with one major exception. That exception is the American Revolution itself, when neighbors really did turn upon one another in the name of political theory in a process more brutal and merciless than popular memory recalls.”

The writer reminds us that “in our lifetimes, the single most significant threat to the life, liberty and property of the average American citizen has always been the federal government. The danger in 2019 is that a consequence of that federal government’s crescendoing dysfunction will be the replacement of that most significant threat with one far more grave, far more vicious and far more relentless: our own neighbors.”

Neighbors? That thought takes us to a very dark place, indeed.

It brings us back to a passage we previously cited by the “prepper” writer John Mosby (which may or may not be a nom de plume). The civil war he anticipates is not the one of 1861–65 with set-piece battles by uniformed soldiers. It’s guerrilla warfare. 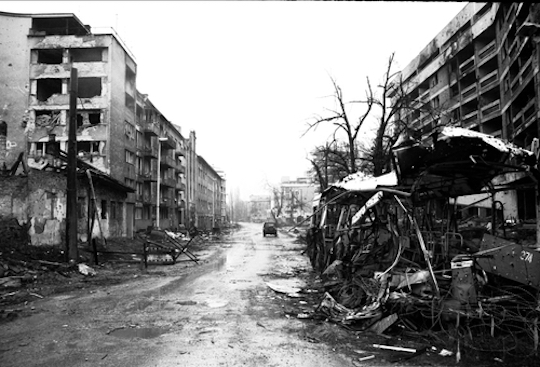 Sarajevo, March 1996: The city had hosted the Winter Olympics only 12 years earlier

Let’s hope it doesn’t get to that extreme. As we said after Charlottesville, the only asset classes that would thrive under those circumstances would be precious metals, ammo and No. 10 Mountain House cans.

Barring that extreme (or maybe not), “This is the probable 2019 and you should prepare for it,” continues Mr. Robb’s anonymous friend.

Unlike the American Revolution, there will be no black hats or white hats: “There does not seem to be much by way of partisans for liberty in 2019. More apt, probably, is the example of France with its own tradition of ideological self-terrorization, devoid of any good guys, whether in 1792-94, 1870-1871 or 1958-1962.”

Yikes. What to do? “In times past,” the writer says, “one avenue of preparation and protection was withdrawal.” In this age of all-pervasive social media, he says that is not possible.

“Preparation, therefore, isn’t the seeking of the safe harbor.Nor is it the girding for combat and surrender to the awful machinery of mass democracy at its lowest point. Let the fanatics do that: There is no victory in their game.

“The only preparation that matters is in conducting yourself and your family as if it were another era entirely. You cannot change what 2019 will probably be. You can, though, be an example in memory and history when the time comes to rebuild.”

Heavy food for thought, no doubt.

We suspect we’ll be coming back to this topic as the year goes on — and sussing out the potential impact on various asset classes, assuming we don’t end up in the 1990s Balkans scenario.

Until then, we’re curious what you think. What scenario seems most plausible to you? Have you thought about how it might affect your life and what you should do to prepare?

To the markets today… where Friday’s good vibes are carrying into a new week.

As we said Friday, a major driver of the rally was Federal Reserve chairman Jerome Powell promising the Fed “will be patient” in evaluating further interest rate increases during 2019.

Our Jim Rickards reminds us that “patient” was a key word the Fed used a few years ago when telegraphing its intentions to raise interest rates. And so it is again. “For now, it’s a green light for carry trades and risk-on behavior,” he says. “Markets got the cue.”

“2018’s year-end sell-off has set up stocks for a fantastic start to the new year,” says Alan Knuckman, our eyes and ears in the Chicago options trading pits.

Alan directs our attention to this chart showing the trading range of the S&P 500 the last seven years.

“I’m seeing a prime technical setup. And it shows exactly why you need to remain bullish on stocks. 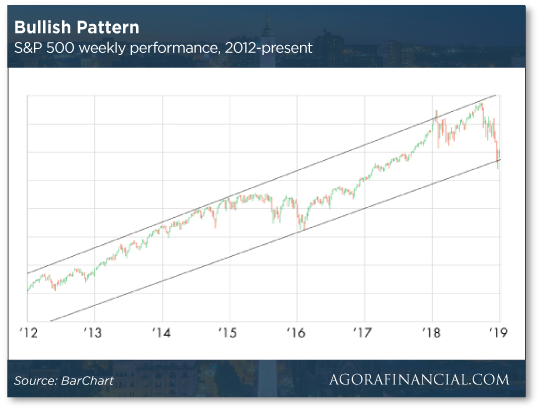 “As you can see, stocks dropped sharply from the top of the S&P’s range down to the very bottom,” he explains. “But stocks held strong at the bottom of the trend channel. That’s a big bullish signal.

“If you’re a market bull, stocks are deeply on sale. And the recent bounce at this major support level provides you with a great opportunity to add exposure.”

And if you want to juice those stock gains, Alan’s weekly options strategy can’t be beat. It could make a meaningful difference to your retirement account. You can get started today, as our publisher shows you at this link.

If you still need proof we’re in the late boom phase of the boom-bust cycle look, no further than the $21.25 cup of conference coffee.

This is “JPM Week” in San Francisco. The JPMorgan Healthcare Conference gets underway today at the Westin St. Francis — where the event has been held every year since 1983.

Of course, San Francisco’s gotten a mite more expensive over the years. The health-biz website Stat came across a menu from one of the nearby hotels putting up attendees — the Parc 55. There, any company holding a JPM Week event can serve coffee for the princely sum of $170 a gallon — or $21.25 for a 16-ounce cup.

“Can you imagine trying to expense a $170 gallon of coffee?” muses Business Insider.

In the crony-capitalist health care industry? Hell yes, we say.

JPM just committed to holding the conference in San Fran for at least 17 more years.

Meanwhile, we’re convinced the U.S. health care system will crack up a few years earlier than that. Just sayin’.

“Just a note to say The 5 is always welcome in my inbox,” a reader rises to our defense after we took some slings and arrows on Friday.

“When you get something free, you can’t expect specific insider advice on trades and money management. The value of The 5 is that it gives us well-rounded insight into daily composites of events in the world of finance and politics without Beltway BS. If you can’t find value in that, you’re not paying attention.

“More and more mainstream media content is just propaganda made up of planted ‘news’ that is always spurious and seldom of any more value than knowing what the Kardashians are up to. The fact that every outlet has the identical stories every day hardly inspires confidence in their independence. Thanks for giving us a daily helping of the Other News.”

“I always learn something new from you,”another chimes in. “And there is usually a chuckle or a laugh out loud to be had. Thank you, thank you.”

“I love The 5, BUT…” writes one of our longtimers, “Friday’s 5 is a perfect example wherein numerous complaints were brushed off after a sales pitch that rang rather hollow to me.

“After James Altucher took a 2019 recession off the table, he said at 00:25, ‘A recession in the U.S. occurs when there is ravenous financial innovation run amok.’

“So I take it that James does not consider the Fed’s falsified interest rate policy (ZIRP) and QE as being a ‘ravenous financial innovation run amok.’ Did the lad ever have a water cooler conversation with Nomi Prins or Jim Rickards on this subject?

“Just maybe what people are complaining about from 03:50 onward on Friday, among other times, has something to do with turning The 5 into an all-season summer/winter edition of Sears’ catalog; and we all know how things have gone for Sears.

“Please recognize that you not only have a diverse readership, but from time to time present diverse opinions from more than one writer. And readers have memories.

“Treating The 5 as a sales catalog can not only result in returned merchandise, but worse yet can go the way of the outhouse, in which Sears catalogs frequently ended up.”

The 5: It’s a balancing act that always looms in the back of your editor’s mind.

Throughout 2018 Alan Knuckman was bullish while Jim Rickards was cautious — just to mention two editors cited here today. Here in The 5 I split the difference as best I could with regular reminders — like the one with our San Francisco coffee item today — that we’re in the late boom phase of the boom-bust cycle.

Yes, we present diverse opinions. That’s because our stated policy for years is that unlike some other financial publishers, we don’t enforce a “company line.” We want our editors to speak their truth to you… and when opinions diverge, we respect your intelligence enough to weigh those opinions and come to your own conclusion.

P.S. Meanwhile, even Jim is acknowledging for the moment that the “Fed put” is in play again, at least for the short term. More from Jim tomorrow…