“Hundreds of millions, and soon billions, of people have or will have access to the health-protecting properties of medical marijuana,” he says. “The potential is just getting started.”

In 2018, the FDA approved the anti-seizure medication Epidiolex — becoming the first-ever federally approved drug formulated with a cannabidiol (CBD) compound.

“Plus, as of the November elections,” Ray says, “half of U.S. states now allow the use of medical marijuana.

“Medical cannabis will be a huge driver of the marijuana market overall,” Ray continues. “It will help bring about more medical breakthroughs and cures to many diseases.”

While Epidiolex has already run the FDA’s clinical-trial gauntlet, another CBD drug — CR845 — is in the FDA pipeline, at the end of a third-stage clinical trial.

Initially, CR845 was developed as an opioid painkiller alternative by Connecticut-based Cara Therapeutics. While the company’s findings didn’t indicate significant pain reduction compared with a placebo, the company went back to the drawing board based on clinical data.

The drug is now being investigated for the treatment of pruritus — chronic severe itching — for patients with kidney disease.

Pruritus is an underserved market; sufferers rely on decades-old steroids and antihistamines that come with their own troublesome side effects.

So far, the completed Phase 2 data are promising… 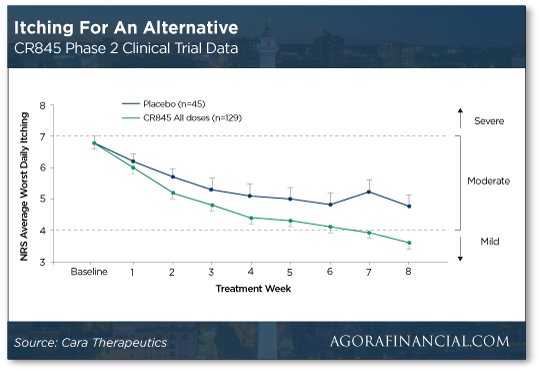 Over the eight-week study, the relationship between the effects of the placebo versus CR845 on pruritus diverged significantly; the results from the Phase 3 study (12 weeks) might show an even greater divergence.

And Cara’s not finished: The company’s looking into the effects of CR845 as a post-surgical nausea/pain reliever and more…

“In the meantime, we’re continuing to see groundbreaking new uses of marijuana in the medical field,” says Ray.

Medical cannabis should get a further boost from the passage of the Hemp Farming Act of 2018, signed into law on Dec. 20.

“Hemp,” says Ray, “was a casualty of the drug war due to its similarity to its psychoactive cousin, THC-bearing cannabis.”

All cannabis varieties, including hemp, were swept into marijuana’s Schedule 1 classification alongside heroin, LSD and ecstasy. 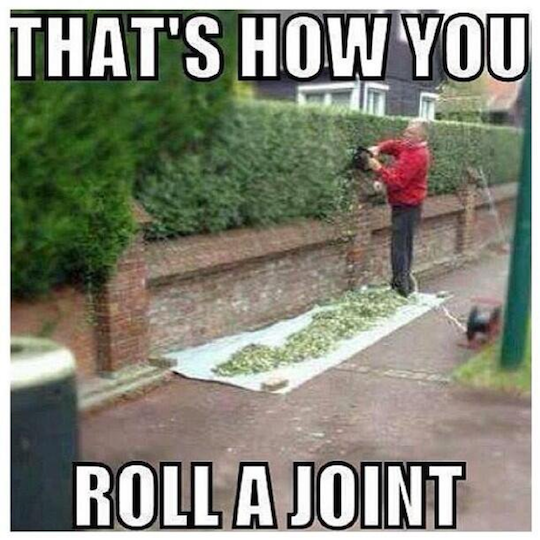 A HEMP joint, that is…

“Hemp,” says Ray, “tends to be poor in THC while retaining appreciable levels of CBD.”

In a groundbreaking move in September — that likely smoothed the way for the Hemp Farming Act’s passage — the DEA reclassified any cannabinoid product with a THC content less than 0.1% to a Schedule 5 drug.

Ray continues: “Once the dust settles, companies will be able to procure new, additional sources of potentially cheaper hemp-derived CBD, rather than limit themselves to imports.”

As for recreational marijuana, “New York could be a very big domino to fall in the push toward nationwide legalization and new federal laws,” Ray says.

The Empire State’s Gov. Andrew Cuomo has gone on record in support of statewide recreational pot legalization. And that’s notable considering Cuomo’s been a vocal marijuana opponent as recently as 2017, calling it a “gateway drug.”

So… the reason for Gov. Cuomo’s change of heart? Why, the unfairness of the criminal justice system, of course!

“We must end the needless and unjust convictions and the debilitating criminal stigma and let’s legalize the adult recreational use of marijuana once and for all,” said Cuomo.

“It couldn’t have anything to do with the fact that New York is being surrounded by jurisdictions for legal pot, could it?”

New Yorkers need only make a short drive to fully legal weed states Massachusetts and Vermont to enjoy some herb. Add to that, New Jersey will be following up with legal recreational weed in 2019.

“More importantly, it means that the New York State Department of Taxation and Finance won’t get its cut of all that free-flowing cannabis money.

“An analysis published by the state this summer found that legalizing weed could generate almost $700 million in state and local taxes and significantly cut costs associated with enforcement of pot laws,” says Ray.

“If weed is legalized, New York would become the second-most populous state in the country to legalize recreational weed,” he says.

Estimates show 1.29 million state residents “would access a legal market for recreational cannabis in year one of the program.

“Just as importantly,” Ray says, “it would open the doors to some big profit opportunities for companies that can’t legally exist in the Empire State right now.”

So while the stock market’s been a basket case during December, “the market for legal pot is making some earth-shaking advances,” says Ray.

From medical cannabis breakthroughs and new recreational weed states to the global outlook for marijuana, we turn to Thailand, which legalized medical marijuana on Christmas Day.

And that’s noteworthy in light of the fact Southeast Asia has some of the most stringent drug laws in the world; marijuana traffickers in Malaysia, Singapore and Indonesia can get the death penalty, for example.

According to Reuters: “The junta-appointed parliament in Thailand, a country which until the 1930s had a tradition of using marijuana to relieve pain and fatigue, voted to amend the Narcotic Act of 1979…”

“This is a New Year’s gift from the National Legislative Assembly to the government and the Thai people,” said chairman Somchai Sawangkarn in a televised parliamentary session.

“Medical cannabis will be a huge driver of the marijuana market overall,” says Ray. “It will help bring about more medical breakthroughs and cures to many diseases.”

And that’s just the start… medical cannabis will lead to recreational legalization in the U.S. and beyond.

So as the war on marijuana draws to a close, this could be your last chance to turn mere pocket change into a windfall.

“I believe the space is going to be incredibly lucrative as a whole,” says Ray. “Of course, not all companies will be winners.”

For access to the best pot stocks on the market, click here… but you’ll want to get in before MIDNIGHT, Jan 14. Find out why here. 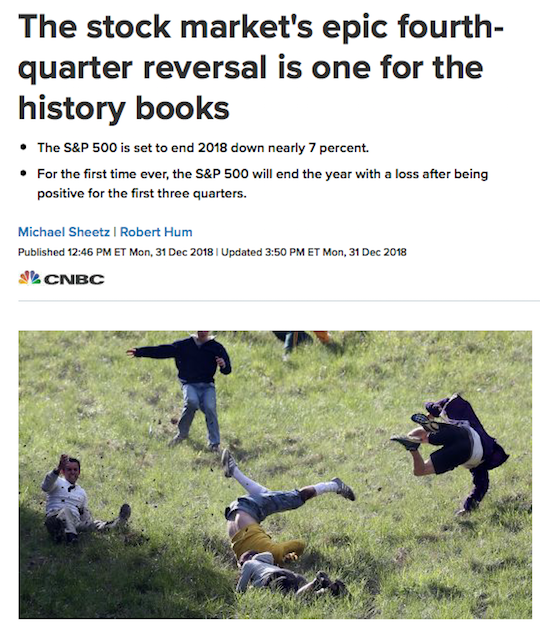 The only explanation we can come up with is someone started New Year’s Eve partying a little early… heh.

To the markets, where the Dow’s recovering from an early-morning 300-point drop… the index has since narrowed its losses to 78 points, where it sits at 23,248.68.

“December was not a good month for investors,” says our retirement and income specialist Mike Burnick, “but there are good reasons to expect a turnaround in 2019.”

“Nobody likes to see their portfolio fall in value,” he says, “but we’ve banked a lot of great profits during the bull market. 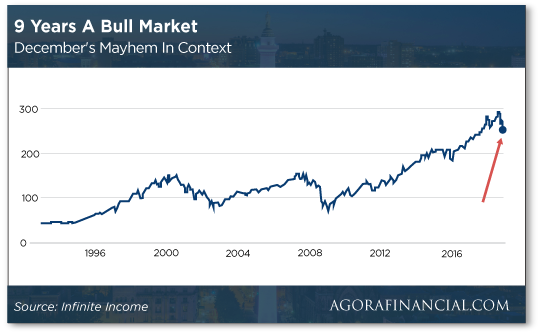 “First, I think it is useful to put the stock market’s recent woes in the context of a nine-year bull market,” says Mike.

Because of this, Mike says: “The stock market is overdue for a rally.

“Moreover, corporate insiders are using their own personal dollars to scoop up stock at a frenzied pace.”

At a fever pitch, in fact, not seen since the market correction in August 2011. At that time, “the S&P 500 had just gotten clobbered for a 19% correction but then rallied by more than 10% in the next six months.

“The reason the insider buying is so important — besides the vote of confidence from people running the company — is that insider buying often precedes a new wave of multimillion-dollar corporate buyback announcements,” Mike says.

Mastercard reports the most robust holiday sales growth in six years — 4.9% over last year. Not only that, but Amazon reports record-breaking online sales that beat last-holiday season sales by a strapping 19.1%.

“Despite the stock market’s rocky December,” Mike says, “the economy is strong and growing.

“It’s easier said than done,” he concludes, “but the key to building long-term wealth is to focus on the underlying fundamentals of the U.S. economy instead of the daily zigzags of the stock market.”

“It appears the incredible shrinking stock market might finally grow this year,”said Greg Guenthner at Rude Awakening PRO in December.

“This increase is the “first real reversal that we’ve seen in these numbers in more than 22 years,” says blog Political Calculations.

Greg explains: “The number of publicly traded companies peaked in the mid-’90s and remained locked in a downward trajectory ever since.

“The dot-com bust, mergers, companies going private and the proliferation of Silicon Valley venture capital have all taken their respective tolls on the number of firms listed on the public markets.”

We’re a little late for New Year’s Eve… but early for the Fourth of July: “Fireworks regulations have been getting more liberal with each passing year,” says an article at Reason.

If you’re into celebrating major — or, heck, even minor — holidays with fireworks, you’ll want to pay close attention to the pyrotechnics regulatory “patchwork” that varies state to state.

“Take age limits,” says Reason. “In ‘Live Free or Die’ New Hampshire, you must be 21 before buying fireworks, while South Carolina law considers 16-year-olds capable of both buying and selling these mini-explosives.”

“When you can buy fireworks also varies.”

So… if you like to celebrate Groundhog Day with a few Roman candles, you’re out of luck in Oregon, Indiana and Kentucky, which restrict firework sales to major holidays.

Speaking of groundhogs: “In Florida, fireworks are legal but only for pest control purposes.”

The good news — that is, if you love oohing and ahhing over fireworks: “The past few years have seen fireworks regulations get a little bit looser,” says Reason.

“Since 2011, places from West Virginia and Kentucky to New York and New Jersey have liberalized fireworks regulations in one way or another.”

And in May 2018, Delaware lifted its ban on the sale of fireworks, leaving Massachusetts as the last state with a “blanket ban.”

If you think lifting the ban on pyrotechnics will leave ERs across the country at maximum capacity, that’s just not so.

“The average number of deaths from firework accidents is only seven per year,” says Reason, “even though Americans consume more than 200 million pounds of the stuff annually.

“The injury rate has remained pretty flat over the past decade as well, hovering between three and four injuries per 100,000 people.”

So more states believe Americans can handle fireworks safely… but if intact hands are critical to your livelihood (i.e., the NFL’s Jason Pierre-Paul), you might want to leave pyrotechnics to the professionals.