Why Time’s Not on Your Side

“As a trader, that’s a question I ask myself a lot,” he says. “After all, we’re in this game to make money.”

“Money we can use…

“Whenever I enter a trade in my account, I start by determining how much I stand to make,” Zach says. “I also consider how much I could lose in the trade if things don’t go my way.

“It’s a basic concept for any trader” — risk versus reward.

“This is a good baseline for traders,” says Zach, and “professionals… know that there’s another variable we have to carefully consider… Time!”

Zach goes on to say that while patience is a virtue, it can also work against investors.

“The idea is that for a trader, the clock is always ticking on your capital. And you’re always choosing between different potential opportunities.”

You might call that opportunity cost. “In finance,” Zach says, “they call it the ‘time value of money.’

“If your capital is tied up in a particular opportunity that takes some time to develop,” he continues, “that’s more time that your money is not being invested in some other opportunity that might also hand you attractive gains.

“So as a trader… you also need to pay close attention to how much time your opportunity will take to play out.”

Zach’s shorthand? “The more time required, the less attractive any opportunity is.”

Speaking of time — and opportunities…

“Everyone wants to get business done before the holiday break,” says Zach… which might be a near-term catalyst for mergers and acquisitions.

“As markets get more volatile and as we head toward the end of the year, the stakes for buyout opportunities” — particularly — “get even higher.

“At smaller companies,” says Zach, “board members and executives are just waiting for offers to roll in. They want to cash out so they don’t have to watch their company’s stock price fluctuate higher and lower.

“Meanwhile, Wall Street dealmakers are anxious to lock in their year-end bonuses by inking a deal and collecting their seven-figure paychecks,” he says.

Zach says: “Weekends are the perfect time for these deals to wrap up.

“With the markets closed,” he says, “executives can sit down and hash out final details, leading to what Wall Street calls a ‘merger Monday’ — when those weekend deals are announced.

“As we enjoy the weekend and get ready for another round of trading next week, don’t be surprised if one or more… buyout candidates announces that it’s been acquired.”

While the markets have been beyond choppy lately — seasickness inducing, more like — “investors are likely to see a relief rally, which could send… buyout positions [even] higher…”

[Ed. note: Want to collect your own year-end bonus — just like a Wall Street insider?

Granted, the bonuses you can collect from Zach Scheidt’s “Buyout Zone” system aren’t as lucrative as the millions that some of Wall Street’s heaviest hitters collect.

But the average Buyout Zone trade has the potential to turn every $500 invested into $24,829.

Click here and Zach will show you how to seize on these Buyout Zone trades… potentially collecting your own juicy “bonus” only days from now.

But you must act fast — remember, time is money — because this offer closes at midnight TONIGHT.]

To the markets… but first, Agora editor Greg Guenthner spotted this gem:

Heh… Keep that in mind.

Currency markets are shrugging at the news that the European Central Bank will wind down its quantitative easing/money-printing program at year’s end — about four years after the Federal Reserve did likewise. The euro trades for $1.14, while the dollar index is flat at 97.1.

“China… It’s one of the fastest-growing biotech markets in the world,” says our tech maven Ray Blanco.

“For years, the Chinese government had regulations in place that stifled growth,” says Ray. “But now, as their middle class keeps growing and citizens are demanding a better quality of care — things are starting to change.”

As for that growing middle class, consider this: “For much of its history, [China] has been among the world’s wealthiest.”

That changed dramatically with Mao’s Communist revolution in 1949 that plunged the country into economic isolationism; a turnaround started, however, in the late 1970s when Deng Xiaoping “emerged as the most powerful politician in the country,” Ray says.

“After a meteoric rise that ranks as one of the great economic miracles of world history,” says Ray, “China now stands as the second-largest economy in the world. 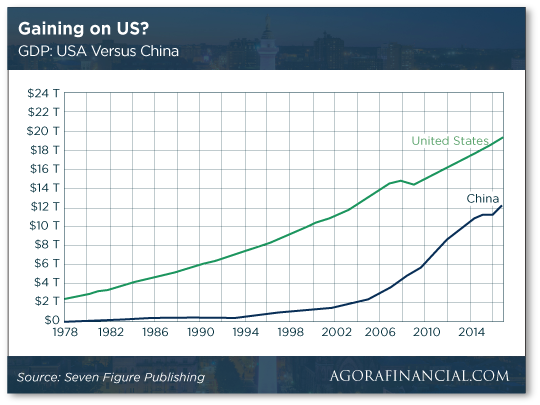 “Even if growth is [slow], it’s still estimated that by the mid-2020s, China’s middle class will grow by 350 million people from its current level of 430 million,” says Ray.

That’s over three-quarters of a billion people and 240% more than the current total population of the U.S.

And Ray says: “As hundreds of millions of people grow wealthier, their priorities start to change.” People are no longer just scratching out a living. Instead, “millions are looking to improve their quality of life.”

And that’s where biotech’s next frontier comes in…

“The Chinese are demanding access to better and more health care options, including biotech and pharma products,” Ray says. 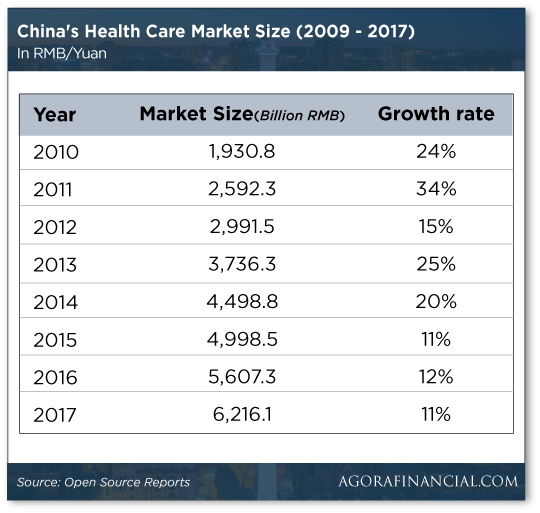 Still, health care accounts for just 6% of China’s GDP. Health care in the U.S. accounts for a whopping 17% of GDP… so there’s certainly room for growth in China.

And China’s already the second-largest pharmaceutical market, with a value that could top $315 billion by 2020.

While the Chinese Food and Drug Administration has been very slow to approve new drugs, that’s starting to change.

“The drug application and development process has been streamlined,” says Ray. And “[China’s] updated its National Reimbursement Drug List, adding hundreds of new drugs, including many made overseas.

“It’s created a sales boom in the country,” says Ray. “Growth in this one particular market won’t stop, and it will be enormously profitable for investors.”

And Ray’s keyed in on a Beijing-based pharmaceutical company that’s seen shares appreciate an eye-catching 160% in just two years.

Sign of the times: Gee, was The 5 surprised by an email in our inbox with the subject line “COMING IN 2019… Medical Cannabis 101.”

“We’ve always been proponents for educating ourselves about opportunities to live the life we want to live.

“At this rate, medical cannabis has proven to be an effective treatment option for a lot of people managing a number of different issues.”

To that end, Agora’s hosting a medical marijuana “pop-up” event for employees in January, featuring a Baltimore-based dispensary ReLeaf Shop.

Not only that, the email continues: “If you feel you could benefit from medical cannabis, a physician will be on site [who] can assess your needs and validate your use. If validated, they can also provide written certification on the spot.”

But wait, there’s more — Agora’s offering a discount for employees on their medical marijuana cards.

Apparently, Agora’s a trailblazer: “We were the first workplace in Baltimore who thought to do something like this,” according to Human Resources.

Of course, we won’t be the last…

[Ed. note: Have you noticed? The war on marijuana is drawing to a close… and this could be your last chance to turn mere pocket change into a fortune.

But you need to get in ASAP.

Click here before this offer goes away Saturday, Dec. 15, at midnight.]

Well, this is awkward… A Montclair, New Jersey, ice cream parlor called Dairy Air — get it?— that featured a logo of a “sexy cow’s butt” has closed up shop amid controversy. 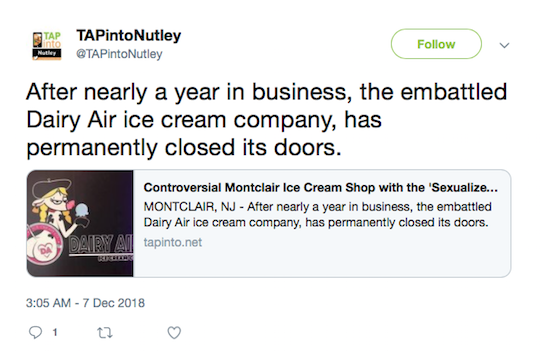 There you have it… *shudder*.

For customers in Montclair, the image was a bit too much for the kiddies.

Residents filed complaints with the powers that be — and the shop’s owner said he’d change the logo — but the parlor’s brand stayed put.

“After a full year of being open (and enduring the ensuing controversy),” reports The Takeout, “owner Anthony Tortoriello announces that the shop is now closing.

“You won’t have his cow’s butt to kick around anymore, Montclair,” the article snaps.

More to the point, Joe Wang, who owns the building where Tortoriello set up shop, says, “They couldn’t pay the rent with their limited hours.” The store was only open Thursday through Sunday.

That’s no way to make a living… to get that bread, you gotta mooove your tail!

After all, many companies are still sitting on piles of cash as a result of the corporate tax cut. Investors get itchy when companies don’t put that cash to work.

Now, for the first time, there’s a system that spots buyout activity in advance of the news going public — giving you the chance to acquire shares of a takeover target just days before they leap higher.

How much could information like that be worth to you? Answers at this link.