No American CEO Would Dare Talk About This

What a wacky 36 hours it’s been. Let’s connect a few dots…

At one juncture yesterday, the Dow was down 800 points — on top of the 800 points lost the previous trading day.

By most accounts, the precipitating event was the arrest of Meng Wanzhou, CFO of the Chinese tech giant Huawei — and daughter of the company’s founder. She was picked up in Vancouver on a U.S. warrant, on charges that U.S. officials still haven’t disclosed.

The predictable mainstream take was that the arrest dealt a major setback to hopes that a U.S.-China trade war could be averted. Gee, ya think? 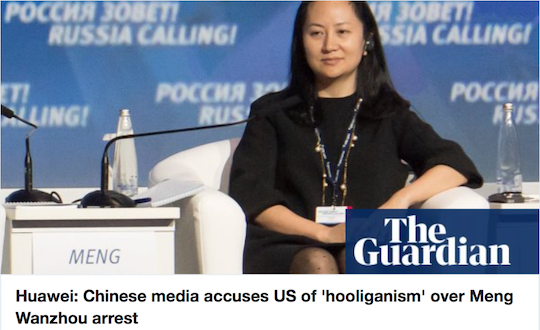 From where we sit, it’s far more serious than that.

We haven’t seen anyone say this aloud in a major media outlet, so we’ll say it here: Imagine you’re a C-suite executive of an American multinational with a presence in China…

Wouldn’t you at least think twice before the next time you fly over there to check out your company’s Chinese operations?

Wouldn’t the thought cross your mind that if the Americans can do it to Meng Wanzhou, the Chinese can do it to you?

Or at the very least, wouldn’t you feel squeamish about any plans you might have to expand your Chinese operations?

We daresay that’s the Trump administration’s objective. It all comes back to the 30-year trade war hypothesis we floated in October. Washington aims to stir up constant confrontation with Beijing to scare off companies from investing in China. Endgame — the destruction of China as a global economic power.

Again, no one seems willing to voice this concern about Meng’s arrest out loud. Which might be the reason the Dow didn’t fall far more than 800 points…

The Wall Street Journal posted a story with the following lead: “Federal Reserve officials are considering whether to signal a new wait-and-see approach after a likely interest rate increase at their meeting in December, which could slow down the pace of rate increases next year.”

The story’s unmistakable message: The Fed’s metronome-steady pace of quarterly increases in the fed funds rate is no longer a sure thing.

Evidently the Journal is still the Fed’s preferred conduit for market-moving “authorized leaks,” even though reporter Jon Hilsenrath has moved into a managerial role, replaced on the Fed beat by Nick Timiraos.

The reaction was stunning. The Fed didn’t even have to resort to “easy” money to make it happen — just the hint of an inkling of a suggestion of “slightly easier” money.

Let’s examine this development in light of the guideposts for Fed policy that Jim Rickards described to us last year.

Jim said the Fed was hellbent to raise interest rates high enough so it could meaningfully lower them again to combat the onset of a new recession. With that in mind, the Fed would raise the fed funds rate every three months like clockwork into 2019 unless…

Any one of those events would prompt the Fed to change course.

The job picture remains mostly sanguine — more about that shortly. But “core PCE” inflation has been sliding backward from the Fed’s 2% target this fall.

And the potential for a sharp and messy decline in the stock market was definitely present yesterday before the Fed stepped in.

“An imbalance of buyers and sellers disrupted trading among bonds and other assets early in the session, traders said, spurring larger-than-average price fluctuations. The diminished liquidity is making it harder to buy and sell stocks, bonds and oil futures and exacerbating swings in the year’s final weeks, when markets are typically more subdued.”

But that was all yesterday. Today, the glow from the Fed’s maneuver has already worn off.

Zooming in on the S&P 500, chart hound Greg Guenthner tells us it’s now trading “in a well-defined range framed by the correction’s first relief rally and yesterday’s comeback move.”

Here’s a “candlestick” chart that shows the intraday movement in the S&P, along with Greg’s annotations. “You can clearly make out where the bulls and bears are defending their respective turfs,” he says… 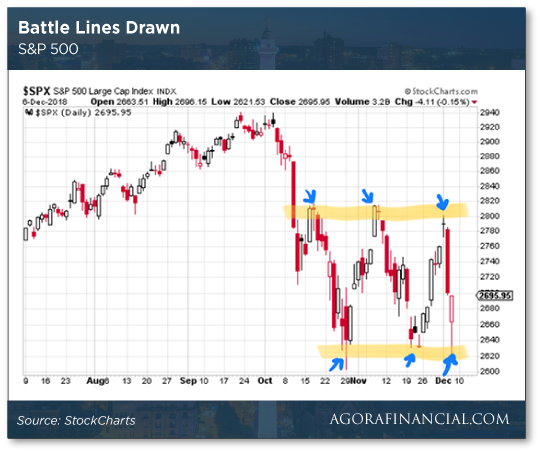 “A close near 2,600, below the Thanksgiving lows, would probably trigger another leg lower,” Greg continues, “while a break above 2,800 could spark an extended rally. Until we see either of these scenarios, we can expect more volatility and chop heading into the holiday season.”

Gold, which should have screamed higher with the Fed’s leak to the WSJ yesterday, was instead held down below $1,240. This morning, it’s edged up to $1,245 — the highest since July.

Crude is rallying hard again after OPEC and Russia agreed to trim production by 1.2 million barrels a day. A barrel of West Texas intermediate is up to $53.53.

Meanwhile, the November job numbers are out… and they’re “meh.”

The wonks at the Bureau of Labor Statistics conjured only 155,000 new jobs for the month — less than forecast, and barely enough to keep up with population growth.

Perhaps more worrisome is that the average of the last three months is only 170,000 — way off the blistering pace set earlier this year. If that weakening persists, it will only give the Fed further pause about raising interest rates.

The official unemployment rate held steady at 3.7%. The unofficial rate from Shadow Government Statistics — accounting for all the part-timers who want to work full time and all the people who’ve given up looking for work — inched up to 21.3%.

Oh, this’ll fix everything: MoviePass is moving to a new tiered pricing structure come the first of the year.

When last we left the saga of MoviePass and its hapless parent firm Helios & Matheson (HMNY), the company had issued another warning that it doesn’t have enough cash to keep running without borrowing more money or issuing more shares — neither of which appeared viable.

So of course, MoviePass is changing the rules on its customers for the jillionth time, starting Jan. 1. It will vary “not only in perks, but also regionally by price,” reports The Wrap.

The three pricing tiers sound suspiciously like the ones offered by the cable industry — “Select,” “All Access” and “Red Carpet” — and we all know how much people love cable, right? Brilliant!

The bare-bones “Select” gives you access to three movies a month “at some point during a film’s theatrical run” — subject to change at completely random unpredictable moments, no doubt. Cost? $10 if you live in the sticks, $13 in midsize markets and $15 in large urban centers.

By the time you get to “Red Carpet” you get access to three movies a month at any time during the film’s run, including 3D and IMAX titles, with prices ranging from $20–25 depending on where you live.

Heh… When we described MoviePass for the first time nine months ago the deal was so straightforward — all you can eat, no restrictions, for $7.95 a month. And we already saw the writing on the wall…

Court documents dug up by the website SpareFoot reveal that U-Haul is plunking down $62 million to buy 13 shuttered Sears and Kmart locations — stretching all the way from Fairbanks, Alaska, to Fort Walton Beach, Florida.

No word on what U-Haul plans to do with the buildings… but self-storage is a good bet based on what the firm’s already doing with an old Kmart in Muskogee, Oklahoma. In a press release from October, U-Haul played the “green” card and sounded very satisfied with itself…

“Our adaptive reuse of existing buildings reduces the amount of energy and resources required for new-building materials and helps cities reduce their unwanted inventory of unused buildings.”

Don’t pull a muscle patting yourself on the back, guys. Especially when all that “adaptive reuse” is surely saving a ton of money on costly imported steel, scarce construction labor, etc., right?

“OK, I guess I am lost,” a reader writes as we continue to catch up on a backlog of feedback from our defense of Julian Assange’s publishing activities.

“As far as I know, the FBI said Hillary Clinton’s server was never hacked. Have I missed something?

The 5: Actually, the FBI never inspected the servers belonging to the Democratic National Committee. Instead, the DNC hired the cybersecurity firm CrowdStrike to investigate.

As we’ve pointed out for years, most of these cybersecurity firms have a perverse incentive to blame any incident they investigate on a foreign government Washington doesn’t like. It’s a surefire way to get publicity leading to juicy federal contracts. It was little surprise when CrowdStrike pointed a finger at the Russkies.

Meanwhile, in reality, “attribution” of any incident is nearly impossible to pin down because it’s so easy for hackers/leakers to cover their tracks and make it look as if someone else did it. Which is why the presence of the Cyrillic alphabet in the altered DNC emails is anything but slam-dunk evidence of Russian involvement.

As for the question of what “crimes” Assange is accused of…

We wrote about those documents shortly after WikiLeaks spilled them in March of last year.

In a nutshell, the CIA found vulnerabilities in the hardware and software produced by American high-tech companies. But rather than say to those companies, “Hey, we found this stuff — you might want to patch it,” they said to themselves, “Hey, what if we use this stuff to jack around with the Chinese and the Russkies and the Iranians?”

Either the CIA didn’t realize — or didn’t care — that hackers might discover the same vulnerabilities and use them to jack around with American citizens and companies.

The Reuters newswire reported that as soon as WikiLeaks published the documents, engineers at Cisco were pulled off other projects to “analyze the means of attack, create fixes and craft a stopgap warning about a security risk affecting more than 300 different products…

“That a major U.S. company had to rely on WikiLeaks to learn about security problems well-known to U.S. intelligence agencies underscores concerns expressed by dozens of current and former U.S. intelligence and security officials about the government’s approach to cybersecurity.”

Sounds like an eminently newsworthy phenomenon to us. Publishing the details surrounding it makes American citizens better informed about the questionable things the “IntelligenceCommunity” is doing in their name, and with their tax dollars.

In the end, that’s why the feds hate Julian Assange so much. He exposes things they find embarrassing. Everything else they spout about how he endangers “national security” is just rationalizing…

P.S. At a time like this, you might want to consider an asset class that’s far removed from the stock market.

One of our publishers says once you watch this 30-second video clip, you might never want to touch stocks again. Not after you lock in thousands of dollars from America’s top companies.

It’s available for viewing from now until 9:30 a.m. EDT Monday when the markets reopen. Click here to watch.