The Biggest Stock Indicator There Is

“Some people use their hair to express themselves,” Elon Musk tells Recode. “I use Twitter.”

And in 2018, Musk has seen his fair share of worse when it comes to Twitter. Consider this: He’s used the social media platform to call out…

(The cave diver tweet seems far-fetched… but remember the 12 boys trapped in a Thai cave this summer? When an experienced diver volunteered to help, Musk — inexplicably — accused the diver of being a pedophile.) 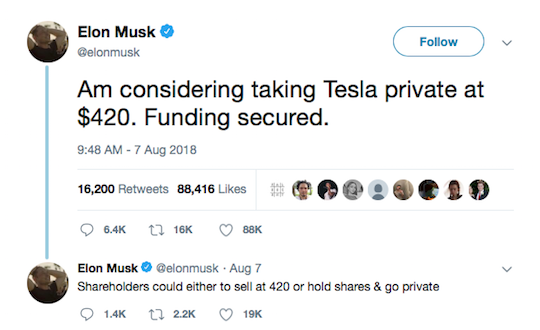 Musk picked the share price $420 because of the number’s association with pot… and to amuse his girlfriend.

Seriously, what is this guy smoking?

(Well, we now know Musk definitely inhales, per his appearance on the podcast The Joe Rogan Experience. He lit up and smoked pot even as the host and Howard Stern emulator Rogan said Musk might want to consider — ahem — Tesla’s shareholders. Really… Joe Rogan’s the voice of reason?)

At any rate, the price of Tesla shares rocketed Aug. 7, the day Musk tweeted… and that’s when the SEC got involved.

Clearly not amused, the SEC investigated Musk for, in essence, manipulating the price of shares ahead of any substantive plans of “taking Tesla private.”

The upshot? Musk and Tesla were each fined $20 million, Musk had to vacate his post as chairman of the board and the company would be required to “further enhance controls with respect to Elon’s public communications,” according to the SEC’s filing.

In other words, the SEC says Elon needs to zip it… heh.

“But Tesla’s tussle with regulators seems far from over,” says an article at Quartz.

“In its regular 10-Q quarterly filing submitted [Nov. 2],” Quartz says, “the company acknowledged… that the SEC has subpoenaed Tesla in connection to both the take-private claim and projections that the company made regarding production rates for the Model 3, the most affordable Tesla yet.”

According to Tesla’s 10-Q filing: “The DOJ has also asked us to voluntarily provide it with information about each of these matters and is investigating.”

That’s why our penny-stock and trading expert Tim Sykes says: “It’s important to delve deep and read the Form 10-Q.”

He says, “This report is kind of like… fact-checking the quarterly earnings report and confirming the cold, hard facts.

“Where the quarterly report can gloss over certain details,” Tim explains, “the 10-Q… is a comprehensive report with details about the data contained in the quarterly earnings report, including the income statement, balance sheet, deficit for stockholders and information about the company’s cash flow.

“This report also includes details about the management’s analysis of the results and addresses risks in the market for the company and any notes about potential legal proceedings,” Tim says (emphasis added).

“This boils it down to bullet points for investors, including the details that seem most salient or will sell the company better.

“It can be appealing to just review the press release for the important points,” Tim says. “However, the 10-Q is worth reviewing.”

In case you’re wondering, this isn’t equivalent to your 11th-grade English teacher saying, “Think how much you’ll missif you just read the CliffsNotes for Moby-Dick!”

Tim says the 10-Q “has a lot more weight because this is the stuff that couldn’t be rearranged or become misleading through careful editing.”

For that reason, “As important as the quarterly earnings report is, don’t just take it at its word,” says Tim.

“While there are strict regulations on earnings reports and they’re generally trustworthy, the fact is that companies want to paint themselves in the most positive light.”

He continues, “They may frame information in such a way that it puts a positive spin on their business even if it’s experiencing some issues.”

Because of the absences of spin, Tim calls the SEC Form 10-Q “the biggest stock indicator there is.” Now, that’s saying something…

[Ed. note: Tim Sykes has already helped more than 20,000 people in over 80 countries make money with his winning strategies.

And come next Wednesday at 1:00 p.m. EST, Tim will show you how you can capitalize on these dates for a better retirement than you dreamed possible.

The event is FREE; you just need to save your spot here.]

While Trump was grabbing a bite with Xi in Buenos Aires last weekend — more on that later — the U.S. government was issuing an arrest warrant for CFO Meng Wanzhou of the Chinese tech giant Huawei. Last night, she was arrested in Canada.

Oh, and she’s not just anybody: She happens to be the daughter of Huawei’s CEO.

Her crime, you might ask? Violating U.S. sanctions against Iran, for which the U.S. is asking for Meng’s extradition.

The splashy headlines should make for an *sigh* interesting day at the markets. And here’s another headline at the time of writing: From NBC News: “China Demands Release of Tech-Giant Executive After Arrest on U.S. Extradition Charges.”

“As the trade-war damage comes into focus early this morning,” says Greg Guenthner, “we can expect the major averages to open precariously close to their November lows.” To wit, do you have the stomach to take a peek at the markets? (Brace yourself.)

As for the state of the stock market, though much can change between now and year-end, 2018 is shaping up to be much like 2011 and 2015 for stocks — a year ending where it began with plenty of volatility in between.

To commodities: “Oil prices fell 4% today after Saudi Arabia’s energy minister said that a cut of 1 million barrels per day would be enough for OPEC and its allied oil producers,” CNBC reports. A barrel of West Texas Intermediate’s going for $50.78, down $2.11.

“Last weekend the eyes of the world were on Buenos Aires,” says Jim Rickards, “where President Trump and China’s President Xi Jinping… had a private dinner to discuss the current China-U.S. trade war.” 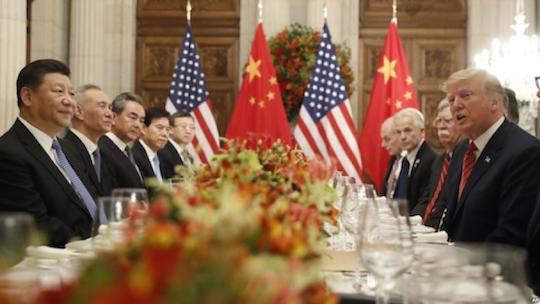 “For his part,” says Jim, “Trump agreed to delay imposing new tariffs on China after Jan. 1, 2019. Specifically, increased tariffs (from 10% to 25%) on $200 billion of Chinese imports will not go into effect.

“Xi agreed to buy a ‘very substantial’ amount of increased U.S. exports from the agricultural, industrial and mining sectors.

“What happened in Buenos Aires is like a truce or a timeout, but the war itself is not over.”

Jim says: “This agreement has a 90-day life. If substantive progress is made, the concessions may be extended along with new structural agreements that reflect progress on the issues to be negotiated.

“If the negotiations are a failure, then the U.S. tariffs will be imposed and China will presumably resume its bad behavior in the intellectual property and cyberattack arenas (if they ever stop it in the first place).”

For his money, Jim’s betting an all-out trade war will resume after 90 days. So “what’s the best way for investors to play the likely re-emergence of the trade wars in April?”

Regardless how things play out, there’s one sector that’ll benefit: gold and gold mining stocks.

“China has tentatively agreed to buy more output from the U.S. mining sector as part of its temporary trade-war peace treaty with the U.S.

“Conversely,” says Jim, “if the U.S.-China trade wars resume in full force, gold will continue its recent rise.” Not to mention, upon the trade war’s resumption, the other conventional safe haven — U.S. Treasuries — will become “unattractive” on a global scale, leaving gold as the most likely alternative.

“All this puts gold in a win-win position,” Jim concludes. “Gold miners will rally if China keeps its promise to buy more mining output. Gold bullion will rally if the trade wars resume.”

Meanwhile, if Trump’s objective in waging a trade war is to narrow the trade gap with China… it’s not working yet.

This morning, the Commerce Department reports a $43.1 billion trade deficit with China during October. That brings the year-to-date figure to $420.8 billion — up 23% from a year ago.

The overall trade deficit, meanwhile, has swelled to $55.5 billion — a 10-year high.

According to an article at Reason: “A college in Michigan thinks the best way for students and professors to defend themselves in the event of a mass shooting might be to…” Wait for it…

“Throw hockey pucks at the gunman.

“To that end,” Reason reports, “Oakland University’s faculty union purchased 800 pucks for professors and 1,700 for students.” 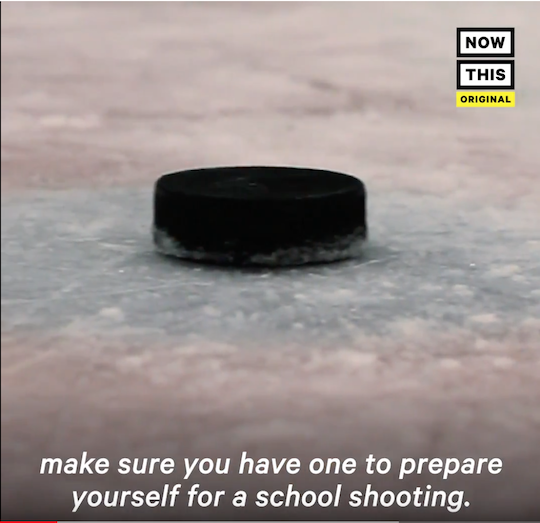 That’s a lotta hockey pucks… which got us wondering how much that set the faculty union back.

We found some cut-rate hockey pucks for $1.49 each because, heh, you don’t need a NHL-regulation puck to hurl at someone.

Why not take said $3,725 and — going out on a limb here — purchase roughly 11 average-priced 9 mm handguns to, ya know, fight fire with fire?

“Oakland is a gun-free zone.” Of course.

“In the event that an armed maniac decided to target the university,” Reason— er —reasons, “he probably would not be deterred by the revelation that he’s technically prohibited from bringing weapons onto the campus.

“Which is why the logic of gun-free zones doesn’t make a lot of sense.”

Perhaps hockey pucks will be a more effective deterrent?

On second thought, no. Just no.

Tim’s Retirement Catch-Up Summit happens Wednesday, Dec. 12, at 1 p.m. EST… And all you need to do is reserve your free spot.

Learn how you can capitalize on Tim’s calendar strategy… for the retirement of your dreams.