From “The Armageddon Gang”…

It was 11 years ago this month the “Great Recession” got underway.

Well, that’s how the wonks at the National Bureau of Economic Research figure it. They say the U.S. economy peaked in December 2007… beginning a sickening slide that didn’t end until June 2009.

If the “recovery” since then still feels weaker than other post-recession episodes of your lifetime… you’re right. Going by the measure of inflation-adjusted GDP, the U.S. economy has expanded only 17% compared with that December 2007 peak. 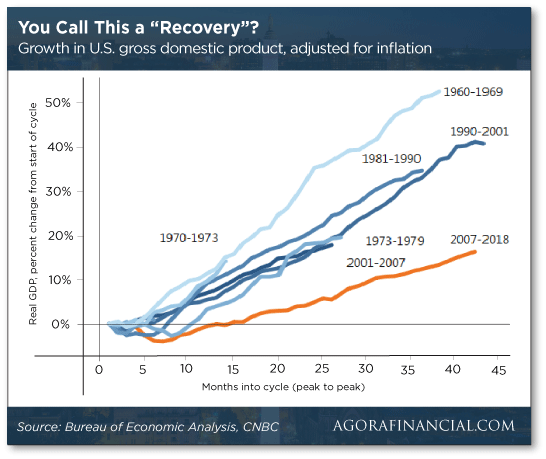 It’s also less than the much shorter economic expansions of the 1970s and ’80s.

On the household level, the current recovery is also the weakest of the post-World War II era.

And so it goes with many other economic measures. Homeowner equity… corporate profits… even the S&P 500 adjusted for inflation is weaker than it was during the booms of the 1980s and ’90s.

Around here at Agora Financial, we still take pride in anticipating the Great Recession — bucking the mainstream consensus. Shortly after our executive publisher Addison Wiggin founded the firm in 2004, we published a report with what he called a “playfully facetious” title — “The Total Destruction of the U.S. Housing Market.”

Our researchers had uncovered an internal document at Fannie Mae, the biggest enabler of the subprime mortgage market. The document revealed Fannie’s massive exposure to derivatives — the complex financial instruments Warren Buffett once called “financial weapons of mass destruction.”

Our report was so provocative that Fannie scrubbed the document from the web and fired the poor sap who wrote it.

That episode was an early tremor in what became the earthquake of the 2008 crisis.

As the decade wore on, Addison’s efforts — including three New York Times business best-sellers — earned him a reputation as a doom-and-gloom type, a “perma-bear.” In March 2007, Time magazine blithely lumped him in with a motley assortment of analysts it dubbed “The Armageddon Gang.”

By that time, Addison was already at work on a groundbreaking documentary called I.O.U.S.A. — forecasting there would be hell to pay for the gargantuan debts accumulated by government, corporations and households. Addison interviewed everyone from Buffett… to Steve Forbes… to former Federal Reserve chairmen… to leading Fed critics like Ron Paul.

I.O.U.S.A. made its debut on Aug. 21, 2008 — less than a month before the Panic of 2008 went full tilt with the bankruptcy of Lehman Bros. and the near-demise of Merrill Lynch and AIG.

Of course, Addison was not alone in anticipating the 2008 crack-up… but he did stand nearly alone in the aftermath.

They had a luxury Addison did not. By and large, they were mere pundits and loudmouths — people with a platform. If they were wrong, only they would suffer the consequences.

Addison, on the other hand, was running a financial publishing firm. Newsletter subscribers relied on Agora Financial for guidance about what to do with their money during highly uncertain times. It’s a responsibility he did not take lightly.

So he largely retreated from the public eye after I.O.U.S.A. — other than reaching out daily to a hardy group of followers via this e-letter, which he launched in 2007.

Many of those followers remained gloomy in the years after 2008… and Addison wasn’t afraid to challenge their outlook.

Among the most ardent readers were “gold bugs” who followed the “Trade of the Decade” he recommended in The Daily Reckoning along with Agora founder Bill Bonner in 2000 — when gold was a mere $260 an ounce.

Addison wasn’t afraid to alienate them when he said at one point, “There’s a difference between a gold bug and understanding the impact of Federal Reserve policy on the U.S. dollar. Gold bugs are overjoyed to be riding the gold price all the way to $2,000, and they should be. But you can count on it they’ll ride the price all the way down to $1,000.”

In early 2012, Addison fleshed out his outlook into something we came to call the “Tale of Two Americas.”

Here in The 5, he described it like so on Jan. 24, 2012 — “the contrast between the overwhelming rot penetrating governments and the financial system on the one hand… and the staggering entrepreneurial potential that can overcome the rot on the other.”

That is, none of the problems that led to the Panic of 2008 had been fixed. But the innovation going on in America’s biotech labs, in Silicon Valley, in the shale energy patch, was undeniable. You couldn’t afford to pass up the opportunities.

Our editors guided readers to gains of 266% on a firm with a treatment for ovarian cancer… 225% playing options on a shale oil producer… and a 10-bagger on Tesla Motors.

In time, the “Tale of Two Americas” came to also describe a social-cultural-political divide in the United States.

Here too, Addison was ahead of the game. In 2011 he noticed many similarities between the tea party and the Occupy movement — more similarities than tea party readers cared to admit. (More hate mail!) 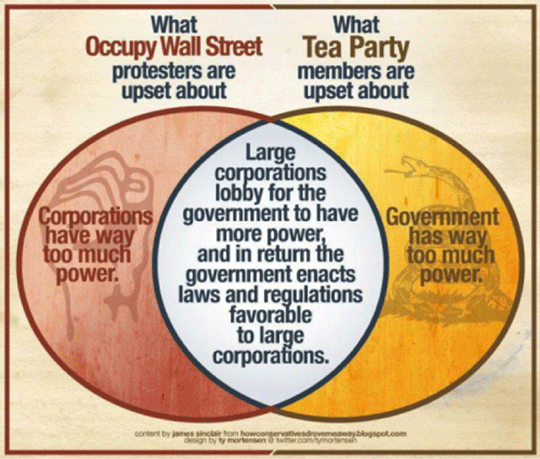 But by 2015 and 2016, the mutual disaffection with Wall Street and Washington had morphed into huge support for anti-Establishment candidates. The Occupiers gravitated to Bernie Sanders. The tea partiers drifted toward Donald Trump. Both of them rejected the Bush-Clinton Establishment consensus that resulted in — well, among other things, the chart with which we started today’s episode of The 5.

In the end, one of Agora Financial’s leading analysts forecast a Trump victory — itself an outside-the-mainstream call, even in the days and hours before Election Day.

Meanwhile, as the 2010s wore on, Addison dialed back his public profile even more — handing off the reins of The 5 to yours truly so he could spend more time mentoring a new generation of financial publishers.

That work has paid off handsomely in Agora Financial’s spectacular growth. Just one “metric” of that growth: The 5’s readership has more than doubled in three years, from 148,000 to 335,000.

And now you’re about to reap the rewards of Addison’s efforts. Tomorrow at 2:20 p.m. EST, we reveal what might be the biggest announcement yet in Agora Financial’s 14-year history. It could have a massive impact on your retirement.

We’ve created a special event where you’ll get all of the details, absolutely free. But you must RSVP at this link for access.

Once you do, Addison will send you a video right away to clue you in. You don’t want to miss this — one more time, click here for access.

To the markets, which are in risk-on mode thanks to a trade war truce.

As you’ve probably heard, dinner between Donald Trump and Chinese President Xi Jinping Saturday night has put the trade war on pause: The U.S. tariffs that were scheduled to rise from 10% to 25% at the first of the year will stay at 10% while the two sides negotiate for 90 more days.

Supposedly the Chinese have already agreed to buy more U.S. natural gas and soybeans and reduce their tariffs on U.S. autos; Ford is up nearly 3.5% on the day.

We caution this is a truce and not a peace treaty; a lot can go wrong in the next 90 days, and probably will. Besides, does Trump really want a final deal in March 2019? Does he want to take the risk that voters won’t feel tangible benefits of a deal by November 2020 and decide he failed on one of his signature issues? Better from his vantage point to keep stirring the pot — for that reason and others we’ve discussed recently.

Gold has rallied back to $1,232. Crude is up nearly 3.5%, to $52.69, on rumors that Saudi Arabia and Russia have come to terms on restoring the production caps that were in effect earlier this year. We’ll know for sure when OPEC ministers meet in Vienna later this week.

In the War on Cash, cash might be staging a minor offensive.

From the Newark Star-Ledger: “A group of state lawmakers want to make New Jersey only the second U.S. state — and the first in 40 years — to ban businesses from refusing to accept cash from customers and requiring them to pay electronically.”

It turns out Massachusetts has had such a law on the books since the late 1970s… but that was enacted long before plastic was ubiquitous, to say nothing of mobile payments, self-serve kiosks, Square readers and so on.

Convenient? No doubt. But “when you start going cashless, you marginalize people who are older, poorer, younger, who haven’t established credit — or people who don’t want to use credit to buy a pack of gum. Which would be me,” says Assemblyman Paul Moriarty, sponsor of the New Jersey bill.

Hmmm… Much as we fret about the consequences of the cashless society, we’re not keen on the idea of these laws, either. It smacks of the old joke about “Everything that’s not mandatory is prohibited.”

At this stage, the bill has overwhelmingly passed the lower house of the Garden State’s legislature. But lobbyists from Amazon and Walmart have bottled up the bill in the Senate. To be continued…

“So a teen was eventually rescued and you wonder why we don’t hear about more of these locked-in-a-vault situations since there are over 9,000 abandoned branches,” a reader writes after Friday’s 5.

“I have a simple answer! This particular teen was lucky in that his friend didn’t just panic and run off, choosing instead to take a chance calling 911.

“I wonder how many of those abandoned branches are storing dead bodies because of a panicked friend or maybe even just a dumbass solo explorer.

As it was, Miami and West Palm Beach TV stations thought the story was dramatic enough to justify live helicopter coverage of the rescue efforts — which, when you think about it, was surely some of the most boring video ever this side of C-SPAN…

P.S. Addison Wiggin — the founder of Agora Financial and the man who launched The 5 in 2007 — is returning to the spotlight after years of keeping a low profile.

He’s just made a rare on-camera appearance to announce one of the biggest changes in our company’s history — one that could have a huge impact on your retirement. 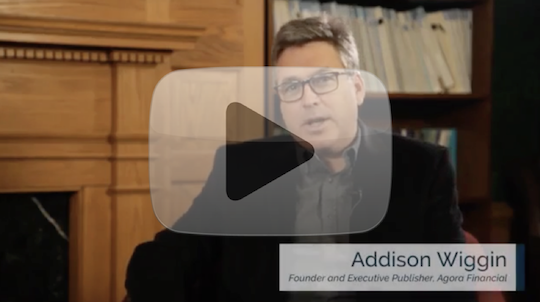 The announcement is set for tomorrow at 2:20 p.m. EST. You can RSVP at this link. As soon as you do, you can watch a short video in which Addison will give you an even better idea of what’s at stake. Click here for access.