The Day China Kicked out Apple and GM

Imagine a headline a few years from now: “Dow Crashes 20% in Hours as Beijing Kicks Apple, GM out of China.”

It might seem far-fetched… and here in the autumn of 2018, it is. But we’re thinking about the trade war — or, more to the point, Washington’s emerging policy of constant confrontation with China — and sussing out where it’s going.

First, let’s talk about the weapons governments have in their arsenals when they wage a trade war.

Of course, there’s the most obvious weapon, tariffs. On that score, Washington has a big advantage over Beijing. Americans import way more goods from China than Chinese do from America.

That’s why the sinking value of the yuan against the dollar amounts to a weapon Beijing can use to wage the trade war.

The yuan has sunk 10% against the dollar in the last six months. For the Chinese, that makes imports from the U.S. 10% more expensive. So it’s like an added 10% tariff. And for Americans, imports from China become cheaper — helping offset the effects of Washington’s tariffs. 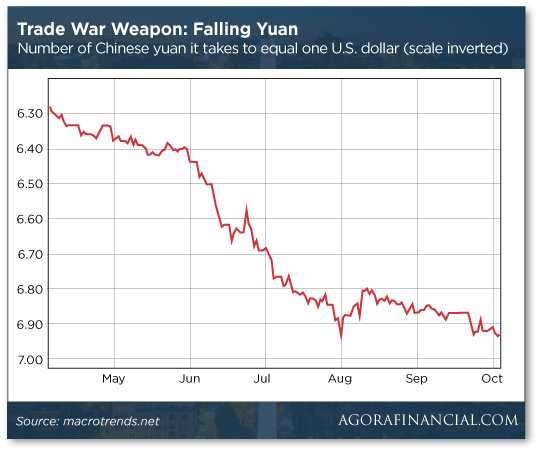 Of course, Washington has taken notice. As we mentioned yesterday, the Treasury Department has once again begged off the chance to label China a “currency manipulator.” But there was an interesting passage in the Treasury’s report: “It is clear that China is not resisting depreciation through intervention as it had in the recent past.”

Translation: It’s probably market forces dragging down the yuan this year, but the Chinese government isn’t doing anything to arrest the trend.

The Treasury’s next report is due in six months. In the meanwhile, another weapon of the trade war is about to be unsheathed…

A hint of this weapon emerged yesterday in a Drudge headline: “Will China Try to Block the Disney-Fox Deal?”

As you might already know, Disney is buying many of Fox’s assets, including the 20th Century Fox movie studio. (A slimmed-down Fox will retain the Fox broadcast network, Fox News and Fox Sports.) Total value of the deal: $71.3 billion.

Because of Disney’s global presence, the deal has to pass muster with antitrust regulators in many countries. Washington has already given its approval, and European regulators probably will do likewise.

But according to the respected trade journal The Hollywood Reporter, China might well prove a stumbling block — given how U.S. movies account for 40% of China’s box-office take and Disney is already the market leader.

“The talk is that China will consider all available options to respond to Trump’s tariffs, including using Chinese antitrust laws to target deals that are perceived to have a strong U.S. tie,” says Beijing-based lawyer Adams Lee.

“So it is a very real possibility that Disney-Fox could be viewed by Chinese authorities as a potential candidate to target.”

Killing a media merger, on the other hand, would amount to Beijing “weaponizing its antitrust approval process to stymie the ambitions of America’s corporate giants.”

With all that as the backdrop… Did you know 18% of Apple’s iPhone revenues come from China? Did you know General Motors sells 25% more cars in China than in the United States?

Those facts emerge in a strategy paper from the global investment firm KKR & Co., cited this month by Marc Faber in his Gloom Boom & Doom Report.

“The big difference in views from China relative to the consensus in the United States is that most of the goods sold by U.S. firms to China are from U.S. companies with an onshore presence in China.”

True, the Apple iPhones and GM cars are made by those companies’ Chinese subsidiaries. The jobs and incomes are Chinese, not American.

But the profits from those Chinese ventures accrue to the American shareholders in Apple and GM and other U.S. giants with a major Chinese presence.

If you own shares in those sorts of blue chip firms… suddenly the threat against the Disney-Fox deal looms very large, indeed.

Write the KKR analysts: “We left China thinking that investors, business executives and politicians should not underestimate the growing risks of selling into China’s large-end growth markets if the U.S. does impose the next $200 billion in tariffs. [Note: Since they wrote that report, the tariffs took effect on Sept. 24.]

“Without question, China has some very powerful tools in its toolkit, including clamping down on U.S. firms selling into China’s burgeoning consumer market as a retaliatory measure, should the U.S. decide to implement further tariffs on Chinese imports.”

We’ll go further: In a worst-case scenario, Beijing could go full-on Communist again — just up and nationalize the Apple and GM factories in China.

Yes, it would send a terrible signal to American firms — heck, all foreign firms — looking to invest in China. But if we find ourselves in an all-out, scorched-earth trade war, Beijing might calculate it’s got nothing to lose.

To the markets… where today’s action in stocks looks much like Wednesday’s — a weak rally that doesn’t nearly make up for the previous day’s losses.

By day’s end yesterday the Dow had shed 327 points for no obvious reason. The Wall Street Journal grasped at straws and came up with “geopolitical tensions” and “worries about the state of the global expansion.” Helpful, huh?

Here’s why these mainstream explanations are usually bogus: Those “worries” should have accelerated overnight when China’s GDP numbers came out: They’re the weakest since the Panic of 2008. But as we write this morning the Dow is up about 90 points.

Gold’s been holding up great this week despite a strengthening dollar. At last check the bid is $1,226 — more or less where it’s been all week.

Crude is recovering from its slide the last couple of days, a barrel of West Texas Intermediate back to $69.41.

“The outlook for the housing market is getting bleaker by the day,” says our Greg Guenthner.

The Commerce Department is out with its report on existing home sales — down 3.4% in September, way more than the “expert consensus” was expecting. Year over year, it’s a drop of 4.1%.

Hurricane Florence didn’t help… but sales were down not just in the South but in the northeast and West too. And the slump comes despite sellers cutting prices — the median home price slipped 2.8%, to $258,100.

“A perfect storm is brewing in the real estate market,” says Greg. “Homes sales are down, housing affordability has plummeted to its lowest level in 10 years and interest rates are rising.”

What a reversal of fortune from last year, when Greg was talking up ITB, the big homebuilder ETF. It rallied from $30 to more than $46.

Then came the stock market scare in February… and another tumble in the last month. “ITB is now down more than 25% year to date,” he tells us, “joining the ranks of some of the worst-performing groups on the market this year.”

Day 3 of legal cannabis across Canada and shortages are emerging.

Shortages are reported all over — on the shores of Newfoundland, on the prairies in Saskatchewan, in the Arctic territory of Nunavut.

Long lines are reported at brick-and-mortar dispensaries, and online outlets are warning of shipping delays — made worse by the threat of a postal strike. 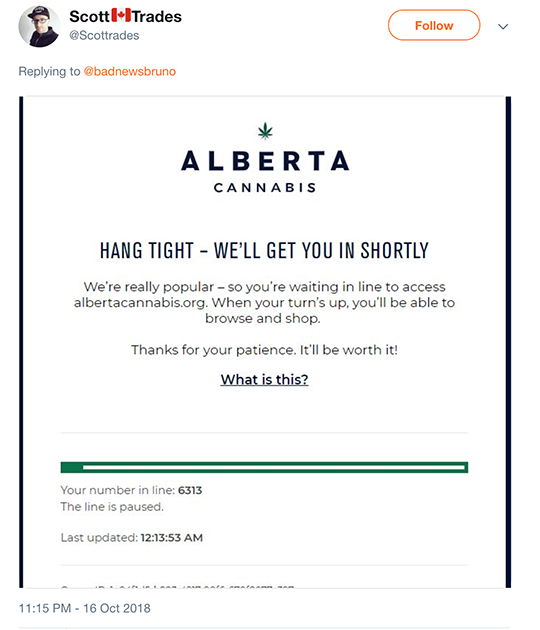 Then again, some people saw it coming: Earlier this month, research by the University of Waterloo and the C.D. Howe Institute anticipated a nationwide legal supply for the first year of 210 metric tons — compared with demand of 610 metric tons.

As with shortages that coincided with legalization in several U.S. states, regulations are the problem. Write the Canadian researchers, “There will not be enough legal supply, especially during the first half of the year following legalization, primarily because of the slow rate of licensing producers.”

But we anticipate the bugs will be worked out in time — not least because as we noted on Wednesday, Canadian cannabis is lightly taxed compared with California’s — where taxes drive the price so high the black market still thrives.

“Some Canadian markets, like Ontario, won’t even see recreational dispensaries open until well into next year as bureaucrats try to figure out how to implement the new laws.”

Still, Ray figured there was no time like the present for readers of his premium advisory Penny Pot Profits to book gains on Canopy Growth (CGC) totaling — snicker-snicker — 420%.

As we’ve suggested for a few days now, the next catalyst for pot stocks will be two ballot measures during the U.S. midterm elections on Nov. 6. Both of them will be groundbreaking, for reasons we’ll explore in the next couple of weeks. Stay tuned…

“Whether it’s the death of one journalist or 50,000 Yemeni children, we need to ask if this scale needs tipping,” a reader writes about the House of Saud’s 86-year rule over the Arabian Peninsula.

“In my opinion it has needed tipping for many years. Not that the U.S. should attempt regime change, but neither should we be arming and protecting the Saudi regime.

“If outrage at the death of one journalist finally tips the scale so we do what we should have done long ago, then great! If not, we need to ask ourselves what it will eventually take to recognize the evil in the Saudi government. And perhaps our own as well.”

The 5: What irks us is the pearl-clutching by the D.C. commentariat when Donald Trump says U.S. arms sales to Saudi Arabia aren’t worth jeopardizing the relationship with the regime over… or other similar remarks.

“Are you going to cover the removal of groups such as Police the Police, Anti-Media, etc., by Facebook and Twitter?

“Bill Bonner linked to a Caitlin Johnstone rant about it, and I would be interested in your take.

“Love what you put out — so clear on political developments.”

The 5: We noticed the purge but we don’t have much to add beyond what we had in a rare single-topic episode of The 5 back in August.

One thing did catch our eye: The shadowy outfit PropOrNot — which we spotlighted nearly two years ago — was quick to take credit for the purge. And indeed, many of the sites/people whose pages were removed were present on PropOrNot’s original blacklist.

One person who evaded the purge appears to be our former colleague David Stockman. As of this morning he’s still on both Facebook and Twitter, still lobbing verbal Molotov cocktails at the powers that be…

P.S. Weary of the stock market’s ups and downs? Looking for someplace safe where you can earn more than a measly 2% return on your money?