Crude remains above $70 a barrel this morning. The national average gasoline price, according to AAA, is $2.88.

Both figures have backed off their levels of a few days ago… but both are way elevated compared with a year ago. Then, crude was fetching $52 and a gallon of regular unleaded was $2.47.

And that’s the reason the apparent murder of the Saudi Arabian journalist Jamal Khashoggi will get swept under the proverbial rug.

The cover story from the Saudi regime has begun to take shape in the last 24 hours, and Donald Trump is giving it credence: “Rogue killers” within the government were interrogating Khashoggi, and doggone it, they juust went a little too far.

For all we know, it’s true. Within every regime, there are competing power centers. And in the case of Saudi Arabia, we’re talking about a kingdom that maintains two armies — so that if one rises up in rebellion, the other can put it down.

But the point isn’t whether you believe that narrative or not. The journalist Glenn Greenwald — who doesn’t believe it for a minute — says, “The point is to give some kind of cover to all the business, political and media elites (including the U.S. government) to continue to do business with them once the rage dissipates.”

Exactly. JPMorgan Chase CEO Jamie Dimon and other hotshots have pulled out of the annual “Davos in the Desert” event sponsored by the kingdom later this month. But once next year’s event rolls around, the fury will have blown over and it’ll be all handshakes and smiles again.

As for the Trump administration, the Khashoggi case is proving a mighty distraction from the renewed sanctions on Iranian oil exports, due to take effect in less than three weeks.

The attention focused on Khashoggi “could derail a showdown with Iran and jeopardize plans to enlist Saudi help to avoid disrupting the oil market,” writes reporter David Sanger at The New York Times.

We bring up Sanger’s byline for a reason: For more than a decade, he’s given Iran hawks in America and Israel a regular platform to peddle scare stories about Iran’s nuclear program. (Sanger was also one of the Times’ most reliable conduits for scare stories about “Saddam Hussein’s weapons of mass destruction” in the buildup to the Iraq War.)

And so this morning, Sanger is giving the Iran hawks a platform in which to say “that possible repercussions on an elaborate plan to squeeze the Iranians have dominated internal discussions about the fallout over what happened to Mr. Khashoggi.”

The biggest concern is about pressure from Congress for sanctions against Saudi Arabia.

Case in point: Sen. Lindsey Graham (R-South Carolina). He has Donald Trump’s ear, he’s a longtime Iran hawk and he’s a longtime backer of the Saudi regime. But the Khashoggi killing is a bridge too far for him, and he pins the blame directly on Crown Prince Mohammed bin Salman. “I’m not going back to Saudi Arabia as long as this guy’s in charge,” he said yesterday on Fox & Friends. 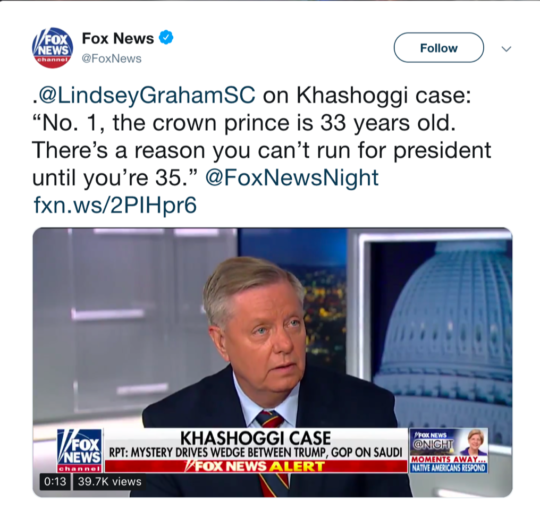 But how to punish the regime? Sanger channels the hand-wringing from within the Trump administration: “To penalize what the Saudis care about most — oil revenue — would be to undercut the Iran policy and send the price of gasoline and heating oil significantly higher just as winter approaches.”

They need not fret, though. As Greenwald says, the “rogue killers” story will give both Trump and the Establishment the cover they need to carry on business as usual with Saudi Arabia’s (literal) cutthroats. Lindsey Graham will climb back aboard. Washington and Riyadh will come up with some arrangement to pump enough oil to make up for the loss of Iranian exports.

Whether that arrangement achieves its goals is another thing altogether. As we’ve mentioned from time to time, Saudi Arabia’s vaunted “spare capacity” to make up for shortfalls in the global oil market may be less than advertised…

The major U.S. stock indexes are giving back a small amount of yesterday’s monster gains.

At last check the Dow has coughed up about 100 points of the 550-point leap yesterday — a loss of about a third of a percent. The S&P 500 and the Nasdaq are holding up better.

Meanwhile, Donald Trump is hitting out at the Federal Reserve again, telling Fox Business anchor Trish Regan, “My biggest threat is the Fed, because the Fed is raising rates too fast.”

Alas, Ms. Regan did not remind the president that when he was campaigning two years ago, he complained that low interest rates had “created a false economy” — indeed, they were blowing up “a big, fat, ugly bubble.” Nor did she ask what’s changed about his position on interest rates since then… other than the fact he’s now the beneficiary of what’s still a “false economy.”

If history is any guide — and admittedly, it’s not always — the stock market is set to bounce still higher after the fright of last Wednesday and Thursday.

Our resident “quant” Jonas Elmerraji is also a fount of fascinating market data. “Looking back over the past 30 years,” he tells us, “there have been 31 instances of the S&P 500 seeing two consecutive drops of 2% or more.

“You’ll be relieved to know that the average subsequent return for the S&P six months later is about 10.3%. The year after this type of event, the S&P 500 has historically packed about a year’s worth of returns into just six months.”

Yes, there are caveats: “For instance,” says Jonas, “it’s rare to see sharp corrections like this when stocks are near record highs. Typically, clusters of big negative price moves happen in bear markets.

“In fact, there have only been a few times in the last 30 years where the S&P has lost 2% or more on two straight sessions while holding within 12% of a record high. Two of those times were earlier this year.”

Then again, the S&P went through an even bigger shock correction in August 2015, only to surge double digits in the months that followed. “The S&P is up 54% since then,” says Jonas.

Conclusion: “Historically, staying bullish after a pair of sharp corrective sessions has been a profitable move in the months that follow.”

Here we go with some more mainstream attention to “de-dollarization.”

We’ve been tracking the trend of countries overseas transacting in their own currencies rather than dollars for years now. We first noticed Russian media using the term “de-dollarization” in 2014. And we first noticed the term picked up by a major U.S. media outlet in August.

Now it’s the turn of the Brits in the Financial Times, although it uses an alternative term we like just as much — the “weaponization of the dollar.” But the idea’s the same: Washington’s constant imposition of sanctions against countries it doesn’t like is driving those countries to walk away from the dollar.

The practice “has not only incurred the wrath of China, [but] it is increasingly alienating government officials and politicians in Europe, the Middle East and Asia as well as infuriating some bank executives,” writes FT columnist Henny Sender.

Heh… We think of Ms. Sender as an outstanding proxy for the mainstream waking up to reality: The last time we cited her in our virtual pages was in the spring of 2015, when she had a column under the headline “QE May Not Have Been Worth the Costs.”

She was aghast to discover the Fed’s ultra-low interest rates in the post-2008 era had robbed American savers of $470 billion in interest income. Not that she cared about your pitiful returns on CDs… but she was deeply concerned for insurance companies and pension funds that were also getting pitiful returns on fixed-income instruments.

Ms. Sender says a signal event came earlier this year, one that we were anticipating months in advance — China’s adoption of an oil futures contract denominated in yuan.

“It was a signal of Beijing’s determination to eventually forge a world in which not everything is traded in dollars… China already uses its own currency to pay for Iranian and Russian oil. Meanwhile, transactions in the Shanghai market are up dramatically.”

No, the process won’t be an overnight thing. “The renminbi can only become a reserve currency if it can offer the world attractive RMB-denominated investments.”

China is nowhere near there yet. But the process is underway.

Canada is the second country — after Uruguay — to legalize marijuana nationwide. The national government will collect a tax from the final producer of either 10% or $1 per gram, whichever is greater. That’s on top of sales taxes running between 5–15%.

Altogether that’s a lower tax rate than in places like California and Washington state — where taxes are so steep that legal purveyors have trouble competing with the black market.

In any event, Canada’s top 12 cannabis companies are valued at a total of $42 billion. Meanwhile, a U.S. cannabis firm is bandwagoning on the news: Acreage Holdings announced the appointment of former Canadian Prime Minister Brian Mulroney to its board — where he’ll join former U.S. House Speaker John Boehner and former Mexican President Vicente Fox. (Acreage goes public on the Canadian Securities Exchange next month.)

As for the current prime minister, who admitted last year he smoked weed as recently as 2010… 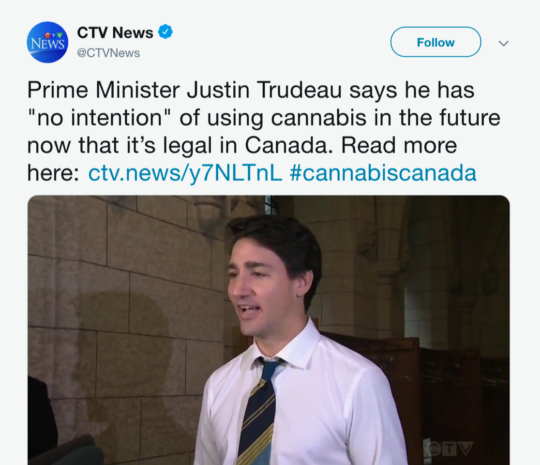 P.S. Across America, people are discovering a strange device that can identify major market moves in advance.

Wall Street pros have used a version of it for years. But now it’s available to everyday Americans too.

You can watch it in action at this link.

Please note that when you click, you’ll be asked to submit your initials on a nondisclosure form. That’s because the information revealed in the demonstration is highly sensitive… and for limited distribution to readers like you only. Here’s the link one more time.