How the World Changed 10 Days Ago

“What do all of these inventions have in common?” says Ray Blanco, our expert on leading-edge technology:

Their impacts go beyond one sector of the economy and everyday life; rather, they change history. Of course, iconoclastic inventions don’t come along every day.

“They belong to a rare sort of technological innovation,” says Ray. “They’re… what are referred to as ‘general purpose technologies’ (GPTs).”

“[General purpose technologies] often require wholesale remaking of infrastructure environments, of business models and of cultural norms,” says an article at The Economist.

“Each new generation of general purpose technology gets adopted faster than the one that came before,” Ray says, “penetrating markets faster and delivering huge profits sooner.”

Take the cellphone, for example: 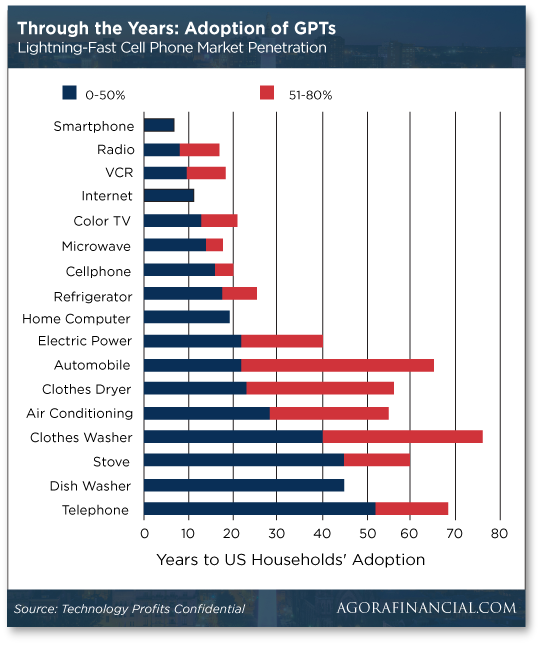 “It has been adopted faster than any technology that’s come before it,” Ray says. Just six years, in fact, to get in the hands of 50% of Americans.

To put it another way, even a person living in a developing country who doesn’t have access to reliable electricity or indoor plumbing might have a cellphone.

“First-generation — or 1G — networks allowed the first widespread use of cellphones.
“By the early 1990s, digital, or 2G, cell service became available. These networks allowed for more than just voice. With 2G, users could text!”

2G networks paved the way for smartphone technology… but we weren’t there quite yet.

“By the early 2000s, telecommunications companies began rolling 3G wireless connectivity out.” And — voila! — this advance allowed us to go online. Wirelessly. With a phone.

“It started with BlackBerry phones,” says Ray. And led to Steve Jobs whipping up the techies in Cupertino when he introduced the iPhone in 2007.

“Today, 4G wireless is the standard,” Ray says. “However, with the proliferation of smartphones and other devices, 4G is reaching its limits.

“A new generation of wireless communications is needed — 5G.”

The next general purpose technology launched in four American cities on Oct. 1 — Sacramento, Indianapolis, Los Angeles and Houston were the first U.S. cities to have Verizon 5G wireless internet. 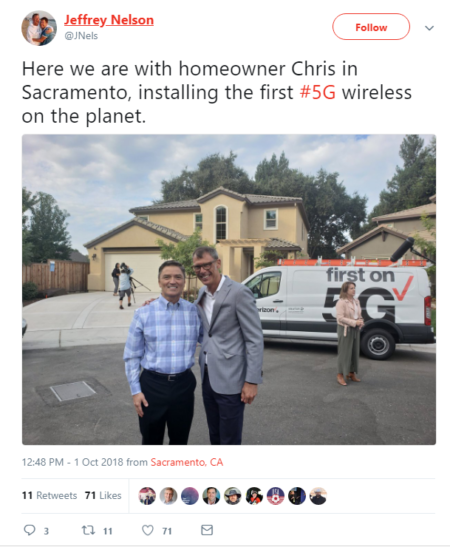 AT&T will follow by the end of the year in 19 U.S. cities, while Sprint, Ray says, “will… roll out the lightning-fast new wireless technology early next year.

“When I say ‘lightning-fast,’ I mean download speeds that are 10 times faster than the U.S. average.

“The typical home broadband connection in the U.S. doesn’t even exceed 100 megabits of data per second,” Ray says.

It’s not hyperbolic to say every tech innovation over the last 20 years has been made possible — directly or indirectly — by wireless networks.

“5G will lead to new tech we haven’t even dreamed up yet. We’ve seen this happen before,” Ray says. “4G, with its higher speeds, helped billion-dollar ‘unicorn’ startups emerge and turn into multibillion-dollar concerns like Uber, Facebook and others.

“And when investors jump on board at the right time,” says Ray, “it’s like they’re riding a wave of history, delivering seemingly windfall profits.”

The tsunami that 5G will set in motion is estimated to grow the world’s economy by $3 trillion and create 22 million jobs. But the best time to invest is now… when 5G’s launching.

Ray says: “Those who understand what’s happening can get wildly rich.” Learn how right here.

To the markets today, where the Dow’s plunged 400 points.

Shares of Sears dropped this morning as the once-largest retailer in the world prepares to file Chapter 11 bankruptcy on Friday.

The producer price index (PPI) increased 0.2% in September — as expected — with the year-on-year rate dropping two-tenths, to 2.6%.

Transport prices rose by 1.8% in the month. “Lack of capacity in the shipping sector, including lack of trucks and especially lack of truck drivers,” says Econoday, “has been a serious constraint in 2018.”

According to the Press Trust of India (PTI), Pradhan said, “We do not know if we will get a waiver [from U.S. sanctions] or not.

“We will be guided by our national interest,” he said. “We have ordered… our usual quantity of oil.”

On the question of payment: “Paying in rupee is an option,” says PTI. “Iran can use the rupee to settle its imports of pharmaceuticals and other goods from India.”

“Even without sanctions also,” says Sanjiv Singh, chairman of Indian Oil Corp., “Iran had been accepting payments in rupee. So let us see how it evolves.”

Couldn’t have said it better…

We introduced you to “Congressional Checks” in June. These are 199A payouts folded into Part II of the Tax Cuts and Jobs act of 2017. The tax bill singled out “pass-through entities,” allowing special tax treatment leading to significant cash payouts.

Zach explains: “I called these payments ‘Congressional Checks’ because there was a last-minute clause that got included in the tax bill that directly benefited a number of prominent congressmen.

“It was just another example of Washington twisting the rules in their own favor and giving the elite another way to expand their wealth.”

With the Fed’s latest round of interest rate hikes of 0.25% — along with chairman Jay Powell falling all over himself about the strength of the U.S. economy — Zach’s wondering if the Fed’s in on the action too.

“In the past,” he says, “it made no sense to put money in bank CDs or Treasury bonds because interest rates were so low. (And that’s actually still largely true.)

“But now that rates are rising and are projected to continue to rise, there are some risk-averse investors who are starting to pull money out of dividend-paying stocks and put that money into savings accounts and other ‘guaranteed’ safe investment spots.”

As people have moved their money out of stocks, some of Zach’s favorite companies that have benefited from the pass-through tax provisions have experienced a pullback.

“While that may sound like a bad thing on the surface,” Zach says, “it’s actually creating quite an opportunity!

“Because when these pass-through entities trade lower, you can buy shares at a cheaper price.”

Ya know, that whole “buy the dips” thing…

“Trading lower doesn’t affect the payouts that these companies ‘pass through’ to you at all… So by purchasing shares at a lower price, you’re still getting the same payout and you’re actually getting more income for every dollar invested!”

It’s still not too late to collect these payouts… but Zach says: “I hope you’ll take advantage of these great discounts on my favorite ‘Congressional Checks’ candidates right away.

“I don’t know how long you’ll be able to buy at these discount prices, but I do know that these companies will continue to pay you for years and years to come.”

Millennials are pissed: The sparkling-water brand LaCroix — which has a cult-like following — is facing a class-action lawsuit.

The company’s accused of misrepresenting its products as all-natural even though it contains “synthetic” and “artificial” chemicals — at least, according to the FDA. 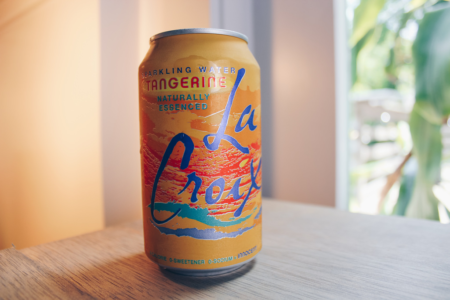 Two compounds in question are limonene and linalool propionate.

According to a story at Reason, “The suit… charges that the compounds have detrimental effects on health.”

And what’s gotten the most press is that linalool can be used as a cockroach insecticide.

As it turns out, the lawsuit’s completely bogus.

The chemicals that’ve sent LaCroix devotees into a tizzy are actually naturally occurring — “the first [limonene] being an oil extract from orange peels and the second [linalool] being found in flowers and plants like cinnamon,” Reason says.

“As for the supposed side effects, evidence of limonene’s carcinogenic effects are noted as ‘inadequate.’ Similarly, linalool’s use as an insecticide is not proof of toxicity toward humans.”

Not only that, but linalool inhibits the growth of certain cancers… the opposite of carcinogenic. So what’s the problem?

Not really a fan of LaCroix, but considering the health benefits, we might start choking it down.

“Yes, let’s have some honesty,” says a reader in response to yesterday’s missive from The 5’s mailbag.
“Because we sure as hell didn’t get any from the person who wrote about Agora folks becoming multimillionaires off the backs of (willing and satisfied) customers!

“I hope you all surpass Bill Bonner and become multibillionaires. In a willful exchange of money for services rendered, this would indicate a free market that is happy to pay for the service rendered. A win-win exchange, as Bill says.

“Please stop giving fools like this a voice! Please! It’s eating my brain!

“We hear enough of this vapid thinking outside of The 5 and other Agora imprints.”

The 5: Sometimes we can’t help stirring the pot…

P.S. We see this afternoon that Waffle House is closing 18 of its restaurants that are in the path of Hurricane Michael on Florida’s panhandle.

The “Waffle House Index” is actually used by FEMA to determine how serious a storm’s expected to be. We hope it’s wrong.

At any rate, if you’re in the storm’s path, we wish you the best. Stay safe.