No, it’s nothing like the subprime mortgages that fueled the Panic of 2008 — which, by the way, reached its zenith 10 years ago this week. (We’ll mark the anniversary here tomorrow, 5 style.)

This new “crisis” is one of weak demand for housing — at least the type of housing that’s been typical of the post-WWII era in America. Millennials just aren’t into it.

The generation born between 1981–1996 is now the largest in the country, comprising 36% of the population. But the homeownership rate among this group is 8% lower than it was among the baby boomers when they were in their 20s and early 30s.

The stereotype of a millennial living in Mom’s basement? “It has some validity,” Mike says. “An estimated 11% of millennials still live at home with their folks. And the remainder is roughly split between renting and homeownership.” 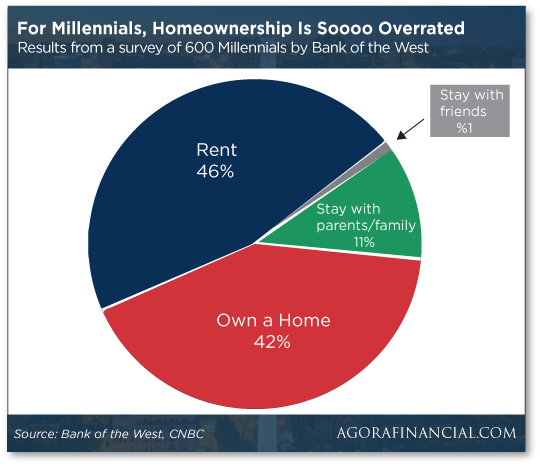 “America remains mired in by far the weakest housing market of the postwar era,” writes Neil Howe at Forbes.

It was Howe and his longtime collaborator, the late William Strauss, who coined the term “millennial” in the early 1990s — back when the most famous millennials were probably the Olsen twins.

It’s true that in 2018 we’re deep into the boom phase of the boom-bust cycle. But the pace of new home construction isn’t anywhere near the peaks seen during previous postwar booms. And it’s barely half the level seen during the peak of the housing bubble in 2005.

“What makes this trend truly remarkable,” Howe writes, “is that America today has a much larger population than in earlier decades. In 1972, for example, America built twice as many houses — even though our adult population back then was only 57% as large as it is today.”

Millennials, he says, “are much more accepting of living with their parents and with each other — a function of this generation’s sociability and low marriage rates. Additionally, compared to their own parents, boomers are much more willing to allow their adult children to live with them.”

Result: “Adult population growth has outpaced household growth in 10 of the 14 years since 2004. If it were up to population alone, there would be 2.2% more households than there are today — a figure that equates to nearly 3 million missing homes…

The investment thesis that follows from all these facts and figures: “Investing in companies that rent to millennials, even as they grow older and even as they move into retirement, is likely to be very profitable,” Mike says.

And his favorite vehicles are apartment REITs — real estate investment trusts that specialize in multifamily rental properties. Among the names you can consider…

In essence, Mike says you can be a landlord to millennials — without any of those middle-of-the-night calls about a leaky toilet.

[Ed. note: If you’re looking for even bigger income payouts, Mike says you’ll want to make a toll-free phone call before next Monday. It’ll take only three minutes… but it could set you up for a millionaire retirement… as Mike explains when you follow this link.]

The major U.S. stock indexes are adding to yesterday’s gains. At last check the Dow had once again crossed the 26,000 mark and the Nasdaq has inched above 8,000.

General Motors is holding steady despite news it’s recalling a million pickup trucks and SUVs. Apple is up nearly 2.5%, traders evidently deciding they like the new iPhone lineup after all. (AAPL shares sold off modestly yesterday after the announcement.) No, AAPL did not announce the big takeover we were anticipating, but the suggested trade in The Takeover Alert still has ample time to play out and could be a winner even if no acquisition materializes.

Gold hovers just above $1,200. Crude has pulled back big-time — below $69 again — perhaps because Hurricane Florence is now “only” a Category 2 storm. (Still looks like a monster — hang in there if you’re anywhere in the path.)

For the moment at least, inflation is easing.

The Labor Department is out with the August consumer price index this morning. The month-over-month increase was less than expected, 0.2%. The year-over-year increase works out to 2.7% — down from 2.9% a month ago.

As always, we caution any resemblance to your own cost of living is purely coincidental. The real-world inflation rate from Shadow Government Statistics registers 10.5%. But even that number has climbed down a bit. A month earlier it was 10.8%.

That said, one month does not a trend make. And the numbers won’t dissuade the Federal Reserve from raising interest rates again later this month.

OK, the Europeans are getting serious about this “de-dollarization” thing.

The president of the European Commission, Jean-Claude Juncker, says he wants to turn the euro into a global reserve currency rivaling the dollar.

Juncker isn’t just some faceless “eurocrat.” In 2004, he was the first person to be designated “Mr. Euro” — leader of the European Union’s finance ministers. He then stepped up to the presidency of the European Commission in 2014. His five-year tenure expires next year, and yesterday he delivered his final “State of the Union” speech to members of the European Parliament in Strasbourg, France. 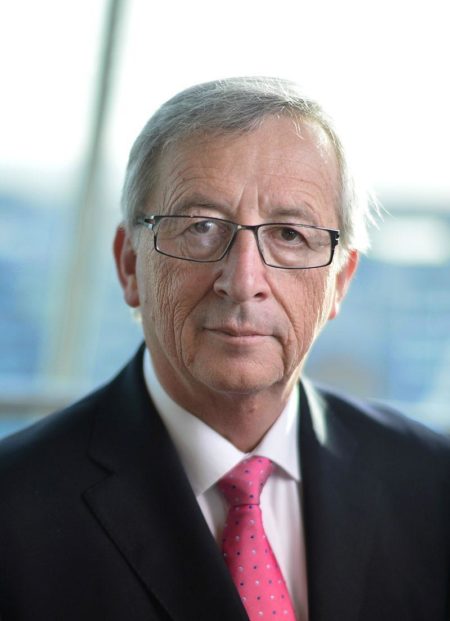 He’s from Luxembourg, if you’re wondering.
[Flickr photo by the European People’s Party]

Juncker said it was an “aberration” that the EU pays for more than 80% of its energy imports in U.S. dollars… while only 2% of the EU’s energy imports actually come from the U.S.

“We will have to change that. The euro must become the active instrument of a new sovereign Europe.”

If you’ve been reading The 5 steadily since May, Juncker’s reasoning won’t come as any surprise: The Europeans are chafing under the revived U.S. sanctions against Iran: Donald Trump, believes Juncker, has “moved to weaponize the dollar as an instrument of foreign policy to punish American rivals.”

Indeed. As we noted two weeks ago, a dozen countries comprising more than a quarter of the world’s population are now under U.S. sanctions or some other form of dollar-based punishment — chiefly China and Russia.

If the Europeans are forced to choose between the United States on the one hand and the rest of the world on the other, well, let’s just say there’s no guarantee about the outcome.

[Noteworthy: This is getting interesting — two “de-dollarization” updates on consecutive days in The 5. At some point, might this become a daily feature?]

Who’d have guessed Donald Trump would launch a War on Christmas?

If the White House goes through with expanded tariffs on Chinese goods, the affected items would include not only mobile phones, toys and textiles… but also Christmas ornaments.

It turns out 91% of imported “Christmas celebration articles” come from China, according to figures compiled by the Switzerland-based ITC Trade Map.

And when it comes to nonwooden ornaments, the figure rises to 94%. U.S. imports of nonwooden ornaments totaled $1.64 billion in 2017 — good for No. 19 on a list of the Chinese goods U.S. consumers are most reliant on. (Cellphones and laptops dominate the list at Nos. 1 and 2.)

Our War-On-Cash musings yesterday inspired a few readers to write.

“Hurricane Flo appears to be running out of juice faster than a Tesla going uphill on a cold day,” says one, “but assuming it does come ashore and actually does some damage, I predict people who don’t carry cash are going to be in for a rude awakening about the downside of electronic transactions.”

“I’m sure I’m not the first to have this epiphany,” says another, “but here goes nevertheless.

“When cash disappears (if it actually does) the number of electronic charges will turn into a monster, and I see most of the ramifications ahead.

“Small charges of under $10 will explode, causing an enormous crash on the system and raising costs to the vendors from the banks that process the charges. This will lead to the ever-growing ‘minimum charge’ of $10 or $15 or whatever, followed by the ever-popular extra 50 cent charge for anything charged under the minimum, which will be followed by minimum charges climbing while the ‘extra charges’ climb in concert.

“The banks will have their way, one way or the other.”

Finally, we fear one reader took the remark about “the complex task of making change” during a cash transaction the wrong way.

“This comment confirms the average IQ in our culture is now 90, down from 100 only 30 years ago,” he says. “The pervasive ignorance this suggests is appalling in the extreme.”

The 5: To be clear, we weren’t referring to the addition and subtraction skills entailed in making change — just the “friction” involved in making change compared with a more “seamless” electronic transaction. If you’ll forgive our resorting to buzzwords there…

And if you get started before this coming Monday, you’ll be in even better shape — as he explains when you click here.