The mainstream says the ever-present “trade jitters” are the reason stocks have stalled the first two trading days of September.

Whether that’s true or not, the White House’s trade-deal success with Mexico might have a boomerang effect — and throw markets for a loop as September wears on.

As you might have heard, Canada is now the odd man out — looking to come to terms on a new agreement covering all of North America.

To Jim’s way of thinking, whatever Canada does, “Either way it’s a great accomplishment by President Trump and his trade team.

“Mexico will retain preferred access to U.S. markets, and the U.S. will benefit from huge new agricultural purchases by Mexico.

“Tariffs will be reduced or eliminated in many categories,” says Jim. “This is a classic win-win deal.

“By finding a new market for U.S. soybeans in Mexico, Trump has removed the Chinese threat to buy fewer soybeans from the U.S.

“The Mexican deal also gives Trump a political win ahead of the midterm elections, which makes a Chinese deal less urgent.

“If Canada can be brought into the U.S.-Mexican fold,” Jim says, “the win will be even bigger and China’s leverage even less.” (A win-win-win? Heh.)

This loss of urgency to finalize a trade deal with China was confirmed when Trump’s trade team “increased their demands on China to include internal structural reform in addition to trade concessions,” says Jim.

“These reforms are not likely to happen soon, if at all, which shows how a China deal is suddenly less pressing.

“By outflanking China in Mexico,” Jim concludes, “The political benefit to Trump of confronting China may now outweigh the detriment of a trade war.”

That might deliver another jolt to the stock market, but Trump has already said he can live with that. “The stock market could have been up 60%, but I have to do things,” he told a crowd in suburban Detroit last April. “I can’t let other countries take advantage of us. The country is doing much better than the stock market.”

A quick note on the U.S. trade deficit…

This morning, the Commerce Department reports the deficit in goods and services — the difference between what the U.S. exports versus what it imports from other countries — increased to $50.1 billion in July from $45.7 billion in June.

“The core story here is that strong domestic demand is sucking in imports,” says economist Ian Shepherdson of Pantheon Macroeconomics. “The trade deficit likely will be flat-to-higher over the next couple of months.”

Not exactly the outcome the White House is expecting…

To the markets, where we’re seeing a lotta red…

The Nasdaq’s hovering right above the 8,000 mark.

As for commodities: Oil’s selling for $68.94 a barrel, down almost a dollar.

“The market often misinterprets trial data on the day they are released,” reports Ray Blanco on the science-and-wealth beat.

If you were with us yesterday, you know Ray was anticipating an announcement this morning with the potential to shake up medicine as we know it forever. Trial results were due on a gene-editing treatment for a rare metabolic disorder affecting at most one out of every 100,000 people. Positive results would point the way toward similar gene editing treatments for up to 15,000 other diseases, including cancer and Alzheimer’s.

“These results are good,” Ray tells us via email, “but there’s a touch of ambiguity.”

In plain English, the treatment did a good job of reducing the type of carbohydrate molecule associated with this disease. The ambiguous part is that after treatment, there was still no trace of the enzyme that prevents the onset of the disease. (Almost all of us have the gene that produces this enzyme.)

Regardless, the trial achieved its breakthrough objective: Liver cells were successfully “edited” in vivo, or inside the body — as opposed to a petri dish or test tube.

But we recognize that doesn’t ease the sting for investors: Shares of the company behind this breakthrough are selling off hard this morning.

Ray looks upon these developments as a buying opportunity. More trial results are due later this year. What’s more, “We’ll see a flood of new gene-based therapies entering clinical trials over the next few years,” says Ray. FDA Commissioner Scott Gottlieb confirmed as much a few days ago… 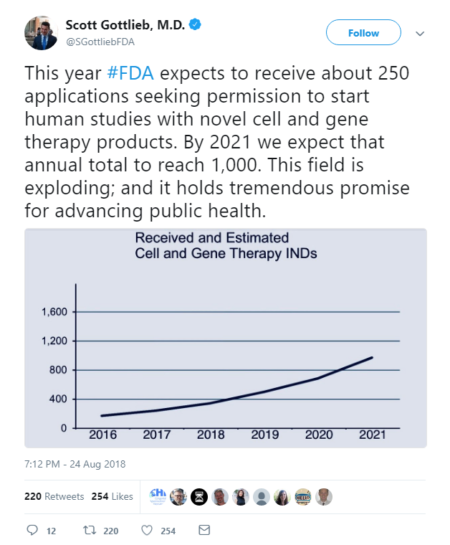 Back to the present: “It isn’t uncommon for issues like these to crop up in early proof of-concept trials,” says Ray. Once the sell-off is over, “we often see shares bounce back and then some when more rational investors digest the clinical data.”

“U.S. stocks are king of the hill by a widening margin,” says income expert Mike Burnick.

One stock sector’s grabbed the S&P 500’s brass ring so far this year… and it’s not difficult to guess which — technology.

“In fact, if you black out the tech sector’s blockbuster performance, the S&P would be up only 4% so far this year, as you can see below. 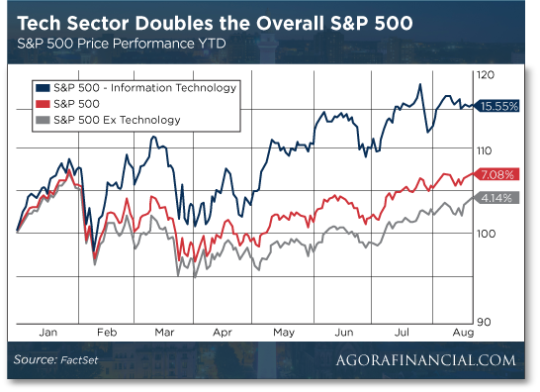 “One concerning sign is the high level of concentration in the S&P 500 index of just a handful of tech stocks,” Mike says.

“Of course it’s the usual suspects,” he continues.

“Just FIVE stocks — Apple, Amazon, Facebook, Microsoft and Google — collectively account for over $4 trillion worth of the S&P’s market capitalization.” (FAAMG’s just not as snazzy as FAANG, is it?)

Put another way, that’s more than the combined market cap of the index’s smallest 283 companies.

Adding to the “concern” about these five mammoth tech stocks is the fact they’re a little rich.

“Amazon, for instance, trades at more than 70x its estimated earnings over the next 12 months.

“So is this a bubble waiting to burst?” Mike says.

“Not so fast,” he says. “If you look at valuation metrics, the tech sector as a whole doesn’t appear outrageously priced, trading at just 18.6x estimated earnings.”

“So tech isn’t really that expensive,” he says. “It’s certainly nowhere close to the nosebleed valuations of 1999–2000 when the last tech bubble burst.

“Value-conscious investors may simply rotate some of their money out of tech and into sectors with more attractive valuations.”

“Three sectors that were out of favor with investors not so long ago, health care (+5%), industrials (+3.25%) and consumer staples (+3%), are outperforming the technology sector (+0.4%) by a wide margin over the past month.”

Mike expects more good things to come from these sectors this month.

“I expect… a VERY strong September,” says wealth-building expert Zach Scheidt. “One new opportunity that I’m watching closely is the decline of the U.S. dollar.

“After rising quickly when the ‘trade war’ broke out, the dollar has since receded on the heels of Trump making progress with Mexico,” Zach says. “This is a trend that should continue as more deals are reached with Canada, the European Union and China in the future.

“So what’s the best way to play a falling dollar?

“Invest in American companies that sell goods and services abroad like Ford, General Motors and Procter & Gamble. That’s because these companies’ overseas profits are now being converted back into more U.S. dollars.”

Before Trump’s agreement with Mexico last week, the euro/USD exchange rate was 1.13, meaning one euro was worth $1.13.

“But now,” Zach says, “with trade war fears easing, the euro/USD exchange rate has since spiked to 1.17, meaning the USD is weaker than it was last week.

“Keep in mind nothing has changed about the car.

“Ford is simply benefiting from selling in the right place at the right time,” Zach says, “which is why I recommend you buy your shares before the dollar gets any weaker.”

The comedy blockbuster movie Crazy Rich Asians — grossing over $100 million in North America so far — has served as an “amazing ad for Singapore,” says an article at travel site One Mile at a Time.

“Perhaps the biggest takeaway many people had from the movie was a desire to visit the country.”

With all the hype surrounding the Southeast Asian country right now, the article says visitors might be disappointed by the real Singapore — “the incredible Changi Airport, hawker stalls, Gardens by the Bay, Marina Bay Sands and more.”

Will this become the new Paris syndrome?

If you’re not familiar with the phenomenon, it occurs when visitors to the City of Light experience a marked sense of disappointment because the city doesn’t — can’t, in fact — live up to its legendary status.

(Ironically enough, bummed-out travelers wind up channeling all the angst and despondency of a French film… heh.)

One aspect of the real Singapore experience missing from Crazy Rich Asians is Singapore Airlines.

In proof that “no company is going to have the right instinct regarding something 100% of the time,” the airline didn’t allow its brand to be used in the movie.

The movie would have been a natural partnership with Singapore Airlines for its jet-setting scenes; instead, a fake airline — “Pacific Asean Airlines” — was conjured up for the movie.

Unfortunately, Singapore Airlines passed up a shot (literally) to highlight its posh amenities like double beds… 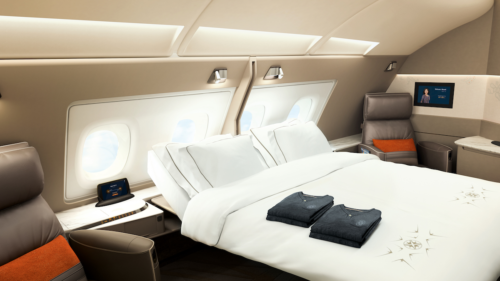 Put your bed in the upright position…

“This was such a huge missed opportunity,” the article continues.

“Large airlines spend millions of dollars on advertising, and being featured in this movie is something that had the potential to be more successful than any other ads they could possibly run.”

P.S. If you’ve ever felt the market was rigged against you…

But it could also make you very rich… delivering opportunities to collect gains as high as 11,333% in as little as 36 days.

Most folks NEVER have the chance to pocket these kinds of gains.

Check out all the details here… You’ve never seen anything like this before.