Bull Runs On (Then What?)

“There are two things I see right now… that are ENORMOUSLY good in the short term for the American economy and the stock market,” says James Altucher.

“Basically, the latest tax reform allows companies that have billions of dollars overseas to take
their money back and have it taxed at a lower rate than usual,” he says.

Why does this matter to everyday Americans?

“For every dollar that is brought back, it adds about $5–10 to the growth of the economy.

“For instance,” he continues, “I spend a dollar on a newspaper, the newspaper guy uses that same dollar to buy a coffee, the coffee guy buys a donut, the doughnut guy buys gum, etc.

“It’s the same dollar, but it just added $5 extra to the economy.

“$1 trillion added to the economy means growth of over 5%,” James says. “That would be record-breaking and send the stock market up to phenomenal highs.”

Next short-term boost for the economy: “The government… deregulated all of the local banks and community banks, making it easier for them to lend money to people…”

You might recall that teensy U.S. housing crisis a decade ago?

“That happened because banks were lending money they couldn’t afford to lend,” says James.

Then banks had to stop because the government dropped the regulation hammer.

“Now the local banks, the small banks, are deregulated again,” James says. “And my guess is the big banks are next.”

That might mean another trillion dollars added to the economy… beyond record-breaking growth, by the way.

In fact, “these are bullish times for small banks in the U.S.,” reports the Financial Times.

“President Donald Trump [in late May] signed a new law aimed at lightening the load on thousands of small and midsized banks that were swept up in the crackdown on huge lenders in the wake of the financial crisis.”

Smaller bank stocks have experienced a lift as a result… even compared with their big bank counterparts. 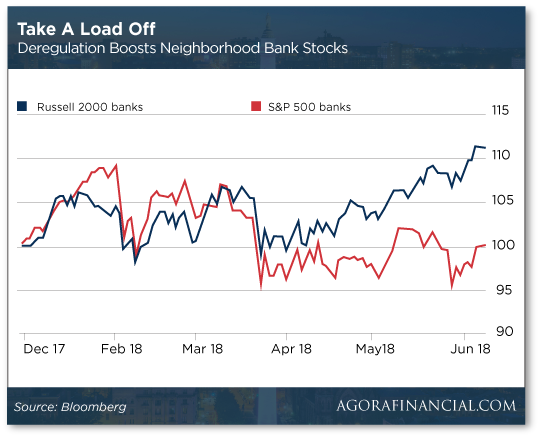 “The Russell 2000 banks index,” the Financial Times says, has outperformed “the S&P banks by about 10 percentage points since the turn of the year.”

“The economy will soar and all markets will soar just in time for 2020 elections,” he says.

“Wall Street will take over and sucker Main Street like they always do,” says James.
While James forecasts the economy will continue its upward momentum in 2019 and 2020 — so enjoy it! — the coming financial crisis “can’t be avoided.”

And that’s saying a lot coming from someone who calls himself a “super optimist.”

“I do think my view of the long term (five–10 years) is correct,” James says.

But, he says, “What I do with my investments today has ZERO to do with what I think long term…

“Invest in a diversified group of investment strategies that are uncorrelated with each other.”

That’s how the “smart money” does it, he says. “They pick strategies and build up a sophisticated portfolio…

“After much trial and error, this is the only approach I take to investing. And it’s the approach I teach.”
[Ed. note: As you might know, James believes if you truly want to enrich yourself, an online brokerage account by itself probably won’t cut it.

We’re not talking about something huge or intimidating, either. Imagine pulling down an extra $1,000 or even $10,000 a month — every month for the rest of your life — simply by pursuing something you’re already passionate about. Just in a slightly different way than you’re used to.

Intrigued? James explains all at this link — no long video to watch.]

“Before you get the wrong impression,” he says, “let me be clear: I am not turning bearish on today’s market. I am merely stating the facts.”

Zach explains: “A bull market is most commonly defined as a 20%-plus rally that was preceded by a 20%-plus decline.

Since market volatility reared its head in early February, the S&P 500 hasn’t seen a new high.

“That makes Jan. 26 the official ending date of this bull market, UNLESS the S&P makes new highs.

“Unless the high of 2,872 is broken, history books will show Jan. 26 as the official end to the post-crisis bull market,” says Zach.

Bitcoin spiked this morning… and then leveled off to $6,417.85. Ethereum — the other big crypto — is priced at $276.72. (The 24-hour charts for both cryptos look nearly identical… hmm. This might have something to do with the SEC’s ruling on a bitcoin ETF that’ll come out in the next 36 hours.)

The housing sector’s not showing signs of life….

Existing home sales have dropped for the fourth month in a row, down to the lowest rate in 2.5 years.

Not to mention foreclosure starts increased in 44% of the metro areas analyzed by ATTOM Data Solutions.

Some metro areas that’ve seen foreclosures on the rise include Philadelphia (up 10%), San Francisco (up 10%) and Houston (up 76%).

Is this a sign the bear market’s knocking at the (foreclosed) door? We’ll see… Read on for a “catastrophe insurance” recommendation just in case….

“Former Vanguard Precious Metals and Mining Fund had $2.3 billion in assets — 80% of that invested in gold and silver mining stocks,” says retirement and income specialist Mike Burnick. “But not anymore.”

We told you earlier this month how the fund’s been renamed Global Capital Cycles Fund. (Sounds like a spin class… heh.)

But Mike says there’s even more to the story. “Along with the name change, the fund drastically lowered its allocation of precious metals mining stocks to 25%,” Mike says. “We’re talking over $1 billion in mining stocks getting dumped!”

This isn’t the first time Vanguard’s retooled the fund’s name, either.

“The question is how did it work for [Vanguard] before?” Mike says.

The answer? Not particularly well.

“In 2001, Vanguard removed the word ‘gold’ from what was then the Gold and Precious Metals Fund.”

Look at the aftermath… 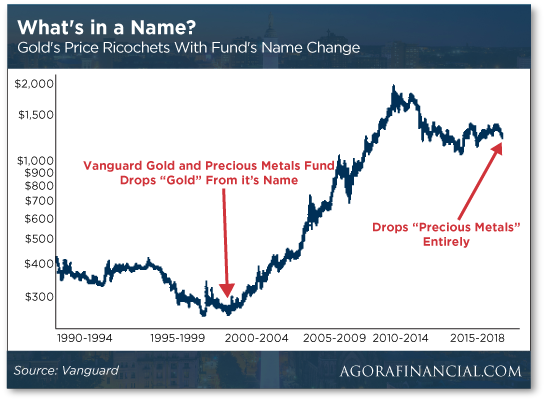 “The point today is the world’s largest fund company no longer offers investors a way to participate significantly in a precious metals rally,” says Mike.

“And it may be doing so at a time when gold is about to take off again.”

Seasoned investors know that discipline’s key; selling off when feelings change is a fool’s errand. Learning to embrace volatility is difficult but necessary… Markets do correct.

“As a result, they’re aggressively dumping precious metals at a very wrong time.

“Regardless of the reasoning,” Mike says, “what’s certain is that all of Vanguard’s loyal gold investors will soon be left without a way to participate in gold’s next run.”

Mike’s advice? “Consider moving your precious metals money to a fund that’s in it to win it over the long run with gold.

“One of my favorites is the U.S. Global Investors Gold and Precious Metals Fund (USERX).”

USERX is co-managed by U.S. Global CEO — and longtime friend of The 5 — Frank Holmes.

“The team behind USERX is one reason for its resilience,” says Mike. “The active fund managers dig deep into understanding the gold market and they know how to stay calm during tough times for precious metals.”

A good quality, to be sure.

“Plus, USERX beats its competition time after time,” Mike says. (Even better.) 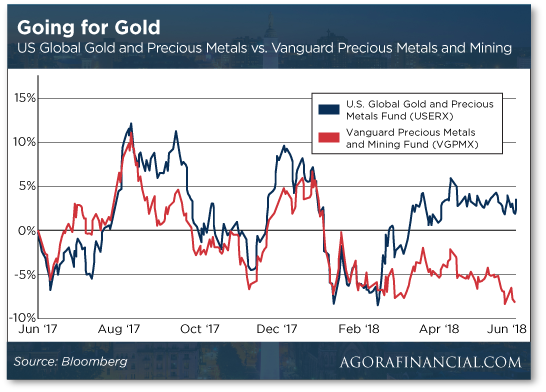 And this chart doesn’t tell the whole story. USERX has outperformed Vanguard’s fund — decisively — for most of the last five years.

“If you own shares of the newly named Vanguard Global Capital Cycles Fund — and $2.3 billion worth of investors do — I strongly recommend you consider voting with your feet and move your money to a fund like USERX,” Mike says.

“This fund is much better positioned to deliver big gains in the next precious metal bull market.”

“Venezuela came to a standstill on Tuesday as the country tried to deal with its newly introduced currency,” says the BBC.

Thousands of Venezuelans shuttered their businesses or just plain decided to take the day off (mental health day?) as they tried to adjust to the latest currency — brainchild of President Nicolás Maduro. 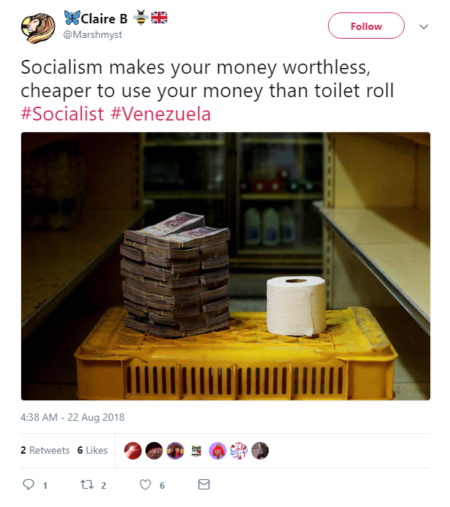 “The government says this will tackle runaway inflation,” BBC says, “but critics say it could make the crisis worse.

“Historically, such moments in Venezuela can be extremely volatile.

“As yet, there are no reports of significant protests or violence, but there is an increased deployment of the security forces across the country for the rollout of the new bolivar.”

“Single topic or not, a very good piece,” says a reader about yesterday’s commemorative issue.

“I remember going to the theater to view I.O.U.S.A. I have admired David Walker ever since.

“Too bad the voters of Connecticut didn’t choose him and the rest of America ignores him. Thanks.”

“I have been on the bandwagon for decades about the disasters headed our way if we continued to pile on debt,” another reader writes.

“I also lied to myself for decades that, to paraphrase Churchill, America can always be counted on to do the right thing, but only after exhausting all other possibilities.

“Now, however, we have exhausted our possibilities to pay off the debt. A default is coming in some way or form. And not just for the U.S.

“Timing, though, has always been uncertain — much like Jim Rickards’ model of snowpack building for decades.

“Here’s a little game I use to illustrate the point for those that don’t deal with or think about such matters often, if at all.

“I’m sure most of The 5’s readers have heard about the outcome if you doubled a penny every day for 31 days — the penny would grow to $10.7 million.

“But the interesting part is that only three days earlier, on day 28, the amount would be just $1.3 million. So the amount would grow from seemingly small amounts to monstrous proportions in the last four days.

“Clearly, the $10.7 million would become astronomical if you carried it out another 31 days of doubling.

“Now imagine you are starting with $20 trillion — of debt! One trillion seconds equals just under 32,000 years!

“Then ask how many more times the debt will double from $20 trillion before people start questioning the ability to get paid back in anything of value.

“I don’t know when it will happen, but my hunch is it will occur well before we start counting debt in quadrillions, which is next — which, by the way, is beyond some estimates of the total stars in the observable universe!

The 5: Not a bad idea… See above for a solid recommendation for getting exposure to precious metals.

P.S. Chalk up another winner for readers of Alan Knuckman’s Weekly Wealth Alert. Moments ago he urged readers to grab gains on call options on the chipmaker AMD.

Once those orders are filled, they’ll collect 100% gains — in just over two weeks.

And that’s the second half of that trade. The first was good for 50% in just a day.

There’s more where that came from. Alan’s next trade recommendation is due this coming Monday. Learn all about the patent-pending system behind these trades at this link.