An Act of Chinese Sabotage

On the surface it sounds ridiculous — the government of a major global power purposely tanking its stock market.

But Jim Rickards says that’s what the government of China is doing right now.

Jim happens to be at the massive U.S. Navy complex in Norfolk, Virginia, today — delivering a private and partly classified lecture on financial warfare with China. “This one has a ‘hurry up’ feel to it,” he says on Twitter, “and involves a joint logistical command. Something must be up.”

Whatever Jim addresses during his talk today is sure to touch on his outlandish proposition that Beijing is deliberately dragging down the Chinese stock market.

If that’s the case, the plan sure is working: The Shanghai Composite Index is in a bear market right now — down 22.8% from its late January high.

And Jim says there’s more to come. Weirdly, he says Beijing’s objective is help wage the trade war… and prop up the Chinese economy.

We return to a passage from Jim’s first book, 2011’s Currency Wars. When discussing China, we can’t repeat it often enough: “No one knows better than the Chinese Communist Party leadership what would happen if… jobs were not available.

“The study of Chinese history is the study of periodic collapse. In particular, the 140-year period from 1839–1979 was one of almost constant turmoil.”

1839 marked the start of the Opium Wars. 1979 marked the end of the Cultural Revolution. In between came the Boxer Rebellion, the Japanese invasion, the Great Leap Forward — basically a nonstop level of chaos no American alive today can relate to unless you’ve traveled to a war zone.

Just one example: “The Chinese Communist Party leadership understood that the 19th-century Taiping Rebellion had begun with a single disappointed student and soon embroiled the southern half of the empire in a civil war, resulting in 20 million deaths.”

Little wonder the crackdown at Tiananmen Square in 1989 was so swift and brutal.

Fast-forward to the present moment: “Economic warfare between China and its trading counterparties is not mainly about economics,” Jim asserts.

Let’s briefly sum up the state of play between Beijing and the Trump administration: “In the short run, China has been able to see Trump’s ante every time Trump increases tariffs,” says Jim.

“China is getting close to tariffs on 100% of U.S. imports. The U.S. can still impose tariffs on another $400 billion of Chinese imports… Trump’s hope is that China will see it’s playing a losing hand, meet Trump for negotiations and settle on lower tariffs all around. This could expand bilateral trade and be a boost to the global economy.”

But that’s not how events are shaking out so far. “Instead, China has injected a currency war tactic into the trade wars to give it more leverage than would otherwise exist.”

That is, Beijing is engineering a devaluation of the yuan against the dollar. We’ve mentioned this devaluation now and then since the process began in the spring. Here’s what it looks like on a chart… 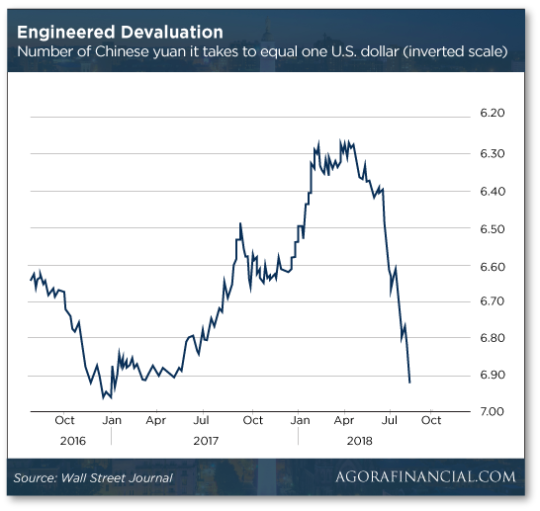 That’s about a 12% drop in four months. In practical terms, U.S. exports to China are now 12% more expensive than they were in mid-April. Just as good as a tariff from Beijing’s standpoint.

And there’s another plus for China: “If the yuan dropped 20% against the dollar,” Jim says, “Chinese export costs would drop by about the same amount because yuan unit labor costs are a huge part of Chinese manufacturing costs.

The downside for Beijing is a tumbling stock market. That’s a price the Chinese Communist Party is willing to pay for now.

“It’s not a result that China wants,” says Jim, “but it’s a price they will pay in order to keep Chinese citizens employed and assembly lines humming.

“Lower unit labor costs combined with higher U.S. tariffs will shift wealth from Chinese enterprises to U.S. importers, but there should be little change in the local currency earnings and job security of Chinese workers. That’s the line in the sand the Communists will defend.”

[Ed. note: Jim has not been banned from Twitter yet — you heard they got around to suspending Alex Jones for a week, right? — but he’s concerned Big Tech wants to suppress this video he’s just recorded.

Seriously, he thinks the ban hammer could come down at any moment… so give it a look while you still can.]

What?! All of a sudden Turkey matters again?

Well, that’s the explanation the mainstream is latching on for a broad sell-off on Wall Street. At last check, all the major U.S. stock indexes are down 1% on the day. With technology shares under pressure, the Nasdaq is selling off the hardest, about 1.5%.

“Turnaround Tuesday was in full effect yesterday as the major averages pushed higher to finish the day in the green,” he says.

Of special note is the small-cap Russell 2000 — creeping toward the top of its summer trading range. “The move hints at a big breakout that could set the stage for a massive fall rally.” 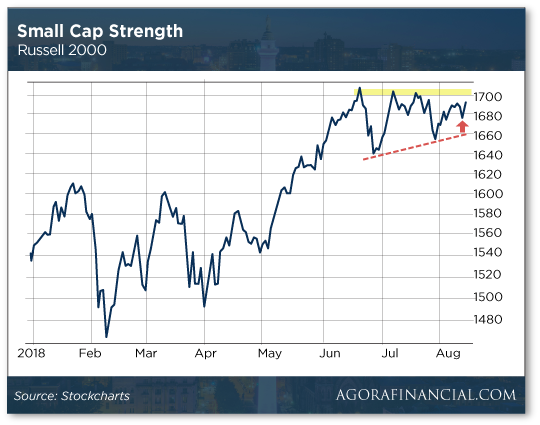 Even this morning at 1,669, the Russell is still comfortably above that dotted line. If it can bounce back as the week progresses, that’s bullish for the broad market. “If small caps break out to new highs over the next few weeks,” Greg says, “we can assume the major averages will follow suit.”

Crude oil has collapsed 3.5% on the day. A barrel of West Texas Intermediate is below $65 for the first time since late June.

The Energy Department issued its weekly inventory numbers this morning. Crude stockpiles nationwide rose by 6.8 million barrels — in contrast with expectations of a 2.4 million barrel drop. That doesn’t say a whole lot about “robust demand” — at least not today.

A strong dollar isn’t helping crude prices — the dollar index is touching another 14-month high at 96.7.

And that dollar strength is translating to still more gold weakness. The Midas metal is sinking again, the bid down to another 18-month low at $1,177.

At least gold still has two major hedge fund backers in its corner. Uh, we think.

This is the time every quarter when money managers disclose their major positions to the SEC on what’s called a “13F” form.

As of June 30, John Paulson’s Paulson & Co. held 4.3 million shares of GLD, the biggest gold ETF. That’s unchanged from the previous quarter. Paulson’s claim to fame is shorting subprime mortgages more than a decade ago; he went heavily into gold after the Panic of 2008 and he’s largely held on despite gold’s 50% collapse from 2011–15.

Two caveats: 1) If they’ve sold any of their positions in the last 45 days, we won’t know about it for another three months. 2) As Jim Rickards reminds us now and then, holdings of physical gold bullion don’t have to be disclosed on a 13F.

The mighty American consumer went on a summer splurge, according to the Commerce Department’s retail sales figures for July.

The number jumped 0.5% — way more than the “expert consensus” looking for a mere 0.1% increase. If you factor out auto sales (because they’re volatile) and gasoline sales (because of rising prices), the jump was even bigger, 0.6%.

That said, mortgage delinquencies are down. So are student loan delinquencies. Considering most of that debt is on Uncle Sam’s books, this data point is a rare item of positive news for the federal budget of late…

To the mailbag, and a return to the free-expression thread that began with Alex Jones’ banishment from major social media platforms.

“The reader’s remark on Monday about free speech and his proposal to outlaw any attempt at circumventing free speech misses on one fundamental understanding,” writes a reader.

“The first 10 amendments don’t grant any of those ‘rights’! What the first 10 amendments actually say is that the federal government, their employees and contractors do not have the ability, authority or autonomy to legislate, decree or ‘rule’ on these clearly stated and identified ‘rights’! In other words these are clearly stated no-go zones (to use a modern catch phrase) for the federal government.

“I realize this is contrary to the Kodachrome all of US were taught in school and how the MSM presents any argument of government or ‘education.’ However, this is how they were presented and argued when Madison and Henry brought forth what became the first 10 amendments — the ‘chains’ that ‘bind’ them, as Jefferson stated it.

“The real misunderstanding is the oath of office. This is a civil, legal and binding contract with the citizenry. This oath is a promise, a vow, a giving of one’s sacred honor to abide by the Constitution as written! (Remember, it takes a successful amendment process, clearly spelled out in the Constitution, to alter the Constitution in any manner or form,)

“The purpose of the oath is to hold our ‘elected’ officials and those they hire to assist them to the Constitution. A constitutional republic under law!”

The 5: We get where you’re coming from, and we’re not siding with the reader on Monday, but…

There was a huge debate over the Bill of Rights in those early days of the Republic.

The Federalists argued there was no need for such a thing. Their case could be summed up as, “What’s the point? The language in the main text of the Constitution implicitly recognizes all the rights enumerated in those 10 amendments.”

Came the reply from the Bill of Rights’ champions: “Yes, yes, we get that. But we’d just as soon not leave anything to chance with future generations.”

It’s true that politicians and judges have fomented much mischief these last 200-odd years. But imagine how much farther along we’d be on the road to serfdom without that “extraneous” language added to the original document…

P.S. It’s one of the most lucrative trading strategies Wall Street has ever devised.

So much so that Silicon Valley’s giants might exercise their immense powers to prevent you from learning about it.

It’s a video “they” don’t want you to see. And it could vanish at any moment. Check it out at this link while there’s still time.