The July job numbers are… whelming.

The Wall Street Journal tried to put its best positive spin on them: “U.S. hiring cooled but remained solid in July.”

The wonks at the Bureau of Labor Statistics conjured only 157,000 new jobs for the month. That’s barely enough to keep up with population growth. Having said that, one month never tells the whole story — and the May and June numbers were revised up.

The official unemployment rate dipped to 3.9%. The real-world rate from Shadow Government Statistics — including all the part-timers who want full-time gigs and all the people who’ve given up looking for work — fell to 21.3%. Still horrendous, but it’s the lowest since January 2010.

Reich was secretary of labor during Clinton’s first term, after which he returned to academia and part-time punditry. We cite him this morning on the basis that even a stopped clock is right twice a day.

Among the troubling realities he points to — “legions of college grads overqualified for their jobs, a growing number of contract workers with no job security and an army of part-time workers desperate for full-time jobs. Almost 80% of Americans say they live from paycheck to paycheck, many not knowing how big their next one will be.

“Blanketing all of this are stagnant wages and vanishing job benefits. The typical American worker now earns around $44,500 a year, not much more than what the typical worker earned 40 years ago, adjusted for inflation.

“America doesn’t have a jobs crisis. It has a good jobs crisis,” Reich concludes.

We won’t trouble you with Reich’s cracked diagnosis of the causes — which comes down largely to falling union membership over the last four decades or so. That, he says, is the reason the wealthiest 10% of Americans are pocketing an ever-growing share of total U.S. income.

No, it wouldn’t have anything to do with Reich’s fellow eggheads debauching the currency, would it?

We come back to something the inimitable Marc Faber wrote nearly five years ago: “I would argue that the Fed is fully responsible for the fact that 90% of U.S. families have had declining real incomes (inflation adjusted) over the last 10 years or so (as money printing raised the prices of energy, food, education, transportation, health care, insurance, etc.) and have experienced a decline in their net worth.

“After all, it was the Fed that repeatedly and deliberately created and continues to create bubbles, which benefit only a minority, while hurting the majority.”

We won’t belabor the point this morning. All we’re saying is that if you see hoo-rah headlines on Drudge about the economy (usually accompanied by “GREAT AGAIN”)… and they don’t quite ring true… you’re right.

The stock market is ending the week on a “meh” note.

The Dow is up a quarter percent at last check — despite a headline the Chinese government is planning retaliation tariffs on about $60 billion in U.S. goods. The S&P 500 remains comfortably above the 2,800 level — even if it still has a ways to go to reach January’s record territory.

The Nasdaq is flat after a very good week — “a picture-perfect bounce,” says our chart watcher Greg Guenthner.

It comes on the heels of a very rough week, he reminds us: “The index retreated from all-time highs to its 50-day moving average in just four trading days.

“But the bulls held the line. A small bounce on Wednesday morphed into a massive tech rally that vaulted the Nasdaq higher by nearly 1.25% Thursday. 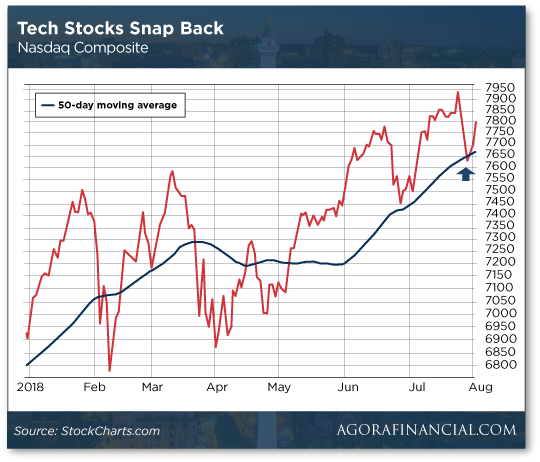 “So much for that epic meltdown everyone was screaming about just a few days ago,” he adds.

Bitcoin took a spill this week after someone — we still don’t know who — made a huge wrong-way bet on bitcoin futures in Hong Kong. So wrong that he’s been wiped out — the long position had a notional value of $416 million — and people on the other side of the trade will have to settle for 82 cents on the dollar.

The news scared some of the proverbial “weak hands” into selling bitcoin itself. BTC is back below $7,500.

We have several long-standing themes in The 5 with new developments to report this week — starting with the ongoing effort to hush up the Saudi Arabian government’s links to the Sept. 11 attacks.

As you might already know, a group of Sept. 11 families and survivors is suing the Saudi Arabian government. Last year, they sought expert testimony from a retired FBI counterintelligence agent named Kenneth Williams. Williams wrote the infamous “Phoenix memo” of July 2001 warning that Osama bin Laden might have recruited pilots to train in the United States.

This week Williams confirmed to the website 28 Pages that the FBI tried to stop him from lending his help. “They didn’t want me to cooperate with the plaintiffs’ attorneys because it could impact other pending litigation involving the United States government… and because… the Trump administration was trying to develop good relations with the Saudi government.”

The Justice Department has no comment. But Ms. Owens, the Sept. 11 widow, has plenty: The FBI’s intervention “confirms what we’ve been suspecting all along — that the government, through three administrations, has decided that staying friends with Saudi Arabia is more important than holding accountable the sponsors of the 9/11 attacks.”

What’s the financial angle, you ask?

In 2016, as the lawsuit started making its way through the courts, we suspected the Saudi Arabian government might devalue the riyal against the dollar — partly to ease the sting of low oil prices at the time, but also to “send a message” to Washington about the lawsuit.

The move would have thrown global markets into a tizzy… but it never materialized.

Now with oil prices strong again, and the feds actively trying to stymie the suit, we doubt it ever will.

You can’t keep a good idea down — including the idea of a firearm from a 3D printer.

In mid-July we figured we were done writing about 3D-printed guns after following the story from its earliest days in 2012. The federal government had dropped its years-long effort to prevent Defense Distributed from posting the computer code that anyone could then download to make a firearm. The files went online, end of story. Or so we thought.

On Monday, attorneys general in eight states sued… and a federal judge in Seattle ordered Defense Distributed to pull the files down while the case proceeded. But it turns out a coalition of gun-rights groups had already downloaded the files… and reposted them. “We are not a party to any case in the jurisdiction of any court located in Seattle,” said Craig DeLuz from the Firearms Policy Coalition. The files are available at a site called CodeIsFreeSpeech.com.

“When you are talking about banning the publication of instructions to do something, rather than banning the thing itself, you run into some First Amendment issues,” says Sen. Mike Lee (R-Utah). “There are literally hundreds of gunsmithing guides on Amazon, are we going to ban those books, too?”

We’re a bit behind the curve with this 5 business travel update, but if you’ve either gained or lost weight, the TSA considers that suspicious.

This week The Boston Globe revealed the existence of a TSA program called Quiet Skies in which federal air marshals are tracking the movements of passengers deemed a potential threat.

It’s ludicrous, starting with the vague criteria to determine who’s a potential threat. “Anyone who has recently traveled to Turkey can apparently be put on the list,” writes James Bovard in USA Today — “as well as people ‘possibly affiliated’ with someone on a terrorist watchlist (which contains more than a million names). The program is so slipshod that it has targeted at least one airline flight attendant and a federal law enforcement agent.”

Once on the list, what behaviors do the air marshals look for? Bovard again: “Marshals receive ‘a file containing a photo and basic information’ and carefully note whether the suspect’s ‘appearance was different from information provided’ — such as whether he has ‘gained weight,’ is ‘balding’ or ‘graying,’ has a beard or ‘visible tattoos’ (bad news for Juggalo fans of the Insane Clown Posse).”

Gee, those criteria don’t sound terribly different from the TSA’s “Behavior Detection” unit, revealed by The Intercept in 2015. We still don’t know whether to laugh or weep… 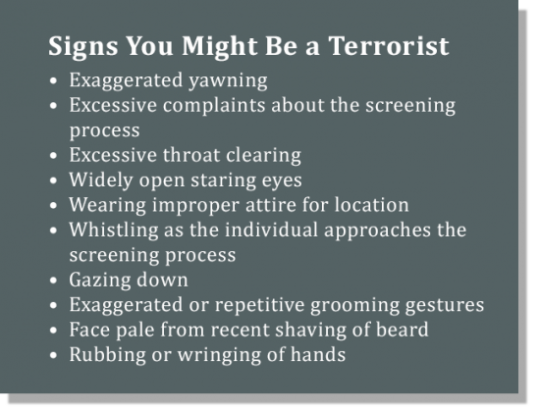 “After nearly 17 years of follies and floundering,” Bovard concludes, “TSA has forfeited its right to domineer the American people.”

“Iran,” says the subject line of an email from one of our longtime readers after a lively mailbag this week.

“I hate platitudes, but to save space, ‘People are people.’ You can dress us up differently on the outside with all kinds of titles and names to go with it, but the insides are the same.

“I believe most people just want a chance to make their own lives and those of their families and neighbors better. They don’t wake up thinking Death to America any more than we wake up and want to overthrow their government (excluding politicians, of course).

“These are the thoughts and machinations of governments, where egomaniacs, sociopaths and leeches suck off of productive society in the best of times and send our children to die in senseless wars in the worst of times.

“One of the tools used by governments everywhere is to keep people fighting with each other so they can stay in power.

“Our government foments and cultivates division between blacks and whites, but it has also included Indians (screw off, PC fools), Asians, Russians, Germans, Hispanics… it goes on and on. Poor against rich is a division they are using right now.

“One day people of every color and every socioeconomic background stop fighting each other and rise up together against those who have abused us and their positions for far too long.

“When the WTC was attacked (by Saudis — our ‘friends’) I remember seeing hundreds, perhaps thousands, of Iranian citizens crying and wailing in the streets of Tehran.

“I’m not saying that the Iranians are saints and that the U.S. is evil.

“We are both just people. Nothing more. Nothing less…

“Regardless of what Goebbels will tell you.

The 5: For once, we have nothing to add.

P.S. Only a few more hours remain in which you can get in on the ground floor of the ultimate biotech breakthrough — potentially wiping out everything from heart disease to Alzheimer’s in one fell swoop.

Obviously you can imagine the profit potential is immense — and it is, perhaps 501 times your money — but why all the urgency? Click here for the answers. (No long video to watch.)