Life-Altering Technology (So Why All the Hate?)

“As ever, when a new discovery promises to change our very existence, it’s often completely misunderstood — even demonized — by whole groups of people.”

So wrote The 5’s founder Addison Wiggin in 2015 when he ventured to a TED talk.

“As we speak, it’s happening (again) in Washington, D.C., less than 50 miles from our Baltimore HQ. Hundreds of scientists, as well as policymakers and the president’s science adviser, are meeting to debate the ethical implications of something called CRISPR technology.

“This technology is extremely controversial,” Addison said, and is “quite possibly the most controversial scientific development of the 21st century.”

If CRISPR sounds like the latest tech startup, it’s not (nor is it the drawer in the fridge where you keep fruits and veggies… heh).

As you can imagine, the implications are enormous, disrupting everything from food production to cancer treatment.

“Gene editing is super-powerful, with a lot of promise but, so far a lot of trial and error,” says Dr. Jacob Corn, professor of biochemistry, biophysics and structural biology at UC Berkeley.

“The way it works in human cells has been a black box with a lot of assumptions,” he says. “We are finally starting to get a picture of what’s going on.”

Researcher Eoin Murphy is using CRISPR to unlock the mystery of Huntington’s disease.

“Huntington’s… is an inherited neurodegenerative disorder that is caused by a DNA mutation called a trinucleotide repeat (TNR) expansion,” he says.

“Due to the nature of the disease, children of those who carry it have a 50% chance of inheritance.” And, coincidentally, the disease is two–three times more likely to afflict the Irish population.

“In addition to trying to identify therapeutic targets for Huntington’s disease,” says Murphy, “the understanding that may come from this research could have implications for other genetic diseases.

“I believe that the answers are in our DNA,” Murphy says, “and technologies such as CRISPR are now allowing us to ask the right questions.”

The implications go far beyond Huntington’s, of course.

All this — you might have heard — will “massively disrupt the current status quo,” says Chris, “namely… Big Pharma’s business model, fully dependent on a sickened, diseased and mentally ill population.

“What you likely haven’t heard about are the three (publicly traded) companies set to dominate the CRISPR field,” Chris says.

“Corporate media definitely aren’t going to tell you about what’s coming down the pike,” he continues. “They make too much money on ads for those ‘magic pills’ that are often outperformed by placebos.

“The best way we know of to learn about how CRISPR works — and how to invest in the three companies set to disrupt Big Pharma’s trillion-dollar racket — is right here at this link.”

You’ll learn why it’s all coming to a head tomorrow when a few companies have the potential to disrupt an $8 trillion industry… that just might become obsolete. Click here now for all the details.

“You may not have realized it, but 5G is already here,” says our breakthrough technology expert Ray Blanco.

“AT&T rolled out its first 5G networks earlier this year in Dallas and Waco, Texas, as well as in Atlanta, Georgia.”

You can add Charlotte and Raleigh, North Carolina, and Oklahoma City to that list by year’s end… with six other cities to be announced.

“Our fiber expansions across the nation will help allow AT&T to achieve its plans to be the first U.S. carrier to provide mobile 5G service,” says AT&T president Bill Soards.

“But the U.S. isn’t the only market for 5G. This is a worldwide phenomenon.”

“There are multiple ways to play the 5G revolution,” Ray says. “All of which offer up the opportunity for a big payday, even generational wealth.”

Three areas you can latch onto now for 5G profit potential?

“You know what an early mover is, right? This is YOUR chance to be one.”

To the markets, where a CNN headline says it all: “Tesla Reported the Biggest Loss in Its History. But It Could’ve Been Worse.”

With that resounding vote of confidence — and a lotta lookin’ on the bright side — we learn Tesla only shelled out $430 million of its cash reserve — “which is much less than many expected,” says CNN — ending the month of June with $2.2 billion in the bank.

The following tweet shows the company’s attenuated history of profitability: 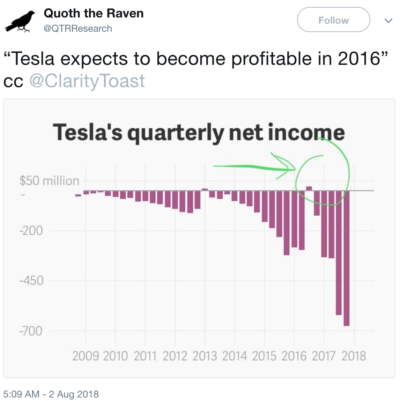 But, go figure, Tesla’s stock spiked on the earnings news by roughly 10%; the price per share is $329 as we write.

Meanwhile, Apple breached the $1 trillion barrier this morning, only to pull back below it at last check.

Really, we hope at the close its market cap will be more than $1 trillion just so everyone will shut up about it.

Apple’s strength today is helping the Dow shake off trade war jitters again. After a 150-point drop at the open, the Dow has trimmed those losses to just 31 points at last check.

According to the Commerce Department, orders for durable goods bounced after two consecutive monthly decreases, increasing 0.8% in June after falling 0.3% in May.

The Fed delivered no surprises at its latest meeting that wrapped up late yesterday; it’s full speed ahead for another jump in the fed funds rate come September.

“If you like a bargain and buying things on sale,” says Mike Burnick, “then you’ll love the price cut that consumer staples stocks have had this year.”

In a follow-up to Tuesday’s issue when Zach Scheidt talked about the utility sector, we hear more on the subject from retirement and income specialist Mike Burnick.

“Campbell Soup, General Mills, Kraft Heinz, Procter & Gamble, Colgate-Palmolive and Clorox are all down by at least 10% and some by as much as 30%!” Mike says.

These tried-and-true blue chips have fallen out of favor with investors recently… and for no good reason. So why all the hate?

“Consumer staples have roughly the same upside potential as the S&P 500,” he says, “but with half the volatility downside risk.”

Recently, rising commodity and transportation costs — not to mention the dollar’s strength — have put downward pressure on these stocks.

“Now, I know that sounds bad,” Mike says, “and this is why consumer staples stocks have done so poorly.

“That weakness, however, is an opportunity to invest,” he notes.

“Consumer staples have historically proven themselves to be one of the most reliable, recession-resistant sectors at bargain-bin prices.”

Mike says: “As the bull grows longer in the tooth, watch the money start to shift back to this downtrodden sector.”

Oh, for pits’ sake: “A Japanese advertising agency has started selling ad space on the armpits of attractive young women,” says an article at The Telegraph.

The Wakino Ad Co. — waki is the Japanese word for armpit — is a subsidiary of Liberta beauty products, “which does a brisk trade in items designed to make armpits beautiful.

“The company’s website has images of sample adverts, with a rectangular, full-color ad measuring nearly 2 inches by 4 inches nestled snugly into an armpit,” the article says. 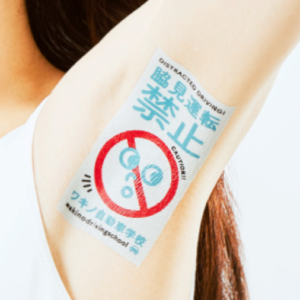 Armpit “real estate” can be rented for roughly $90 per hour; the whacky advertising effort is aimed at commuter trains where models reveal the tiny billboards as they grasp overhead handholds.

Wakino Ad’s website says the company’s looking for more armpit models, including males. “It has also announced plans to stage a beauty contest to find the most attractive armpits in Japan,” Says The Telegraph.

The ad campaign “is likely to go into hibernation as soon as the autumn months arrive and young women begin to cover up to keep warm.”

“How about giving us a daily bitcoin price like stock market updates people receive,” one reader writes. “Do the top three digital currencies. Just an idea.”

The 5: Thanks for the recommendation; we do include the price of bitcoin — when the mood strikes.

Of course, crypto was more dramatic than a Friday-afternoon soap opera in 2017; it’s been somewhat lackluster this year.

P.S. Even though CRISPR technology is the most advanced gene-therapy method, it’s also the fastest and least expensive.

Coming soon, a new test that costs just 61 cents might bring Big Pharma to its knees.

Big Pharma’s scared of this, but it could be your golden opportunity… and it’s set to explode on the scene TOMORROW. Click here for the time-sensitive details.