Record Highs by the 4th of July

Stocks sold off after we went to virtual press yesterday. Traders were disappointed with the “hawkish” tone coming out of the Federal Reserve’s June meeting — about which more later.

The spill in February was wicked, for sure, but the recovery going back to the start of April is unmistakable. A few days ago, Alan Knuckman — our man in the Chicago options trading pits — told us the adage of “Sell in May and go away” isn’t working out so well this year. 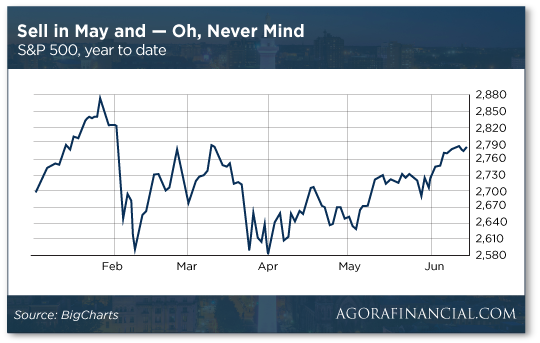 “I see stocks continuing their ascent upward to all-time new highs before July 4,” Alan tells us this morning.

And the Dow faces an even steeper climb than the S&P — almost 6% from today’s level if it’s going to set a record.

But Alan cites three factors to support this forecast…

“Before the end of the year, there will be two more earning seasons — one in July and then another in October. These two earning seasons are going to be stellar like the first earnings season because of the tax cuts.

“When President Trump lowered the corporate tax rate from 35% to 21%, management at large corporations vowed to their shareholders they would do two things:

“Both are easy ways to encourage investors to buy company stock without destroying shareholder value. Everyone loves getting paid to own stock.

“And as companies buy back stock, earnings per share naturally increase as profits are divided up among fewer shareholders.”

Second factor: “The economy is stronger that it’s been since the end of the financial crisis,” Alan continues.

No, it’s still not great by historical standards. Millions of Americans have left the workforce, and they’re never coming back.

But among the people who are in the workforce, the unemployment rate is its lowest since April 2000 — when Erin Brockovich was the big box office draw and Santana topped the charts with “Maria Maria.”

“These fantastic results translate into more people having jobs with more money to spend,” says Alan. “All this money gets pumped back to corporations selling products to people with the luxury to own their goods.”

With that in mind, we’ll interrupt Alan just long enough to bring you the big economic number of the day — May retail sales.

They blew the doors off the “expert consensus” among dozens of economists polled by Econoday — a one-month jump of 0.8%. That’s the strongest performance since last September.

Better yet, April’s numbers were revised up.

The standout increases include restaurants (1.3%) and building materials (2.4%). Even stodgy old department stores registered a 1.5% boost in sales during May.

“Ultimately, a strong economy gives consumers the confidence to spend,” Alan says. “And consumer spending translates into higher share prices for everyone!”

The third factor driving stocks to records by July 4: “The downward trend of the U.S. dollar will once again drive U.S. asset prices higher,” Alan tells us.

While the dollar has rallied in recent weeks, Alan says it’s still in a long-term fall dating back to the start of 2017.

“As the U.S. dollar gets weaker, it makes U.S. products cheaper to non-U.S. consumers. That’s because foreign consumers have more purchasing power with their own currency to buy U.S. goods.

“Since big blue chip stocks are international, a weaker U.S. dollar increases their revenues from an increase in foreign consumers buying their products.”

Alan’s conclusion: “With three of these bullet points in mind, use the summer to stock up on shares of your favorite companies!”

[And if you want to juice the gains Alan sees coming by July 4: This week, Alan took the wraps off a new trading strategy. It pinpoints stocks before they literally “go vertical” on a chart. We’re talking about turning a mere $250 stake into $10,972 in a matter of only days.

Follow this link, and Alan will walk you through how it works.]

So about the Fed: Those positive economic numbers Alan was talking about might be accelerating the Fed’s rate-raising plans.

Yesterday the Fed bumped up its benchmark fed funds rate to 2%. That wasn’t a surprise. What was a surprise was the outlook of the various Fed pooh-bahs about how many more increases they anticipate for the rest of this year — one or two.

Out of 15 pooh-bahs who have a say, a bare majority of eight is now leaning toward two more increases. That’s the hawkish skew that took a little wind out of the stock market’s sails yesterday.

Meanwhile, the European Central Bank piped up this morning about its plans for monetary policy: The ECB says it will wind down its massive quantitative-easing/money-printing project by the end of this year. In addition, the ECB is pledging not to start raising interest rates till the summer of next year.

In other words, the ECB’s efforts to “normalize” policy coming out of the Panic of 2008 are lagging those of the Fed by four years, give or take. As we check our screens, the euro is taking a huge spill against the dollar — down nearly 1.5% at $1.162, its lowest level all month.

But that momentary dollar strength is not translating into weaker gold for once.

Gold has been oscillating around $1,300 for days now. Despite a bump in the dollar today, the Midas metal is up about four bucks at $1,303.

We’ve been following the story of the astronomical cost of housing in the land of Apple and its ilk.

We told you about the listing of a Bay Area waterfront home that oozes midcentury appeal… until you notice it’s falling off a cliff!

The home was originally on the market for $850,000 and the listing agent said, “Not for the faint of heart.”

Indeed… It’s falling off a cliff!

Then we told you about the San Jose stunner that was one hot property. “Hot” in that it’d been scorched by fire — and looked as if it were still smoldering.

No matter, the realtor said, the house could be a tear-down or — with enough vision and money — the burnt husk could be restored.

Now we turn to the charming city of Sunnyvale — that hugs Cupertino to the north — and is one of the major cities that make up Silicon Valley.

We get news that this small, ordinary rancher set a real-estate record: 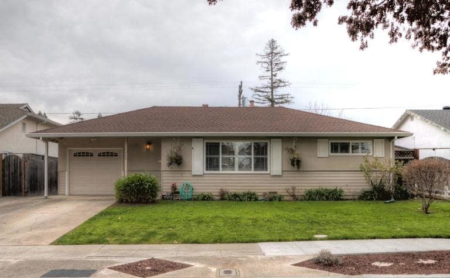 “The two-bed, one-bath, 848-square-foot house… in Sunnyvale wasn’t even on the market for the length of a long weekend before a buyer dropped $2 million in cash for it,” says an article at Curbed San Francisco.

“The humble home, a one-story ranch-style, was only asking $1.45 million to begin with.”

The real kicker is the price per square foot: $2,358 is a record for Sunnyvale.

To the mailbag: “The recent dialogue about Social Security and the future viability of the benefit (take it early or wait and roll the dice) has conjured up a more diabolical scheme in my thoughts.

“Could the solution to the financial future of SSI (benefits at a fraction of those promised) be universal basic income (UBI)? If Social Security is going broke, why not replace it with UBI?

“At $15,000 (the amount most frequently mentioned), monthly UBI would be $1,250 and very close to the average monthly SSI benefit. Receiving more than that in SSI? Too bad, you lose!

“A scheme like this would eliminate the SSI discussion because Social Security as we know it would no longer exist. Everything would be UBI. With this one act, Congress could eliminate the SSI trust fund debate and accomplish their goal (at least some members’ goal) of redistribution of wealth.

“The viability of UBI? Why bring up details that no one can answer?”

Two years ago, the political scientist Charles Murray (of The Bell Curve fame) made a stir in The Wall Street Journal with a ringing endorsement of UBI.

“In my version, every American citizen age 21 and older would get a $13,000 annual grant deposited electronically into a bank account in monthly installments…

“The UBI is to be financed by getting rid of Social Security, Medicare, Medicaid, food stamps, Supplemental Security Income, housing subsidies, welfare for single women and every other kind of welfare and social-services program, as well as agricultural subsidies and corporate welfare.”

Some of the most awful ideas of the left begin with so-called “conservatives.” UBI can trace its origins back to Milton Friedman’s “negative income tax.” In that same vein, an “individual mandate” to buy health insurance was the brainchild of the Heritage Foundation.

“It was a pleasure to read your comments regarding Trump’s meeting in Singapore,” writes a Canadian reader.

“I get damn angry when I hear those talking heads on TV bashing Trump for his supposed giveaways; do they not realize this is the start of a process that will take perhaps years to resolve, if it is ever resolved?

The 5: The veteran Korea watcher Tim Shorrock covered the meeting this week; he was struck by a contrast between the American press corps and everyone else.

“The mood was electric,” he writes at The Nation, “and the reporters from Japan, Vietnam, Germany, Russia, France and many other countries seemed genuinely excited about the prospects of peace in Korea. The feeling of camaraderie in covering a historic event was palpable; frequently during my two days there, reporters from one country could be seen interviewing crews from another.

“At the nearby White House press center at the Marriott, the atmosphere was far more subdued. There, the established press corps from CNN, NBC, The New York Times, The Washington Post and other major outlets seemed interested only in how the summit might affect Trump and his political fortunes, and had little interest in the enormous impact of a peace settlement on South Korea…

“Watching the [Trump press conference] from Seoul on CNN, Seth Mountain, an American teacher and musician, told me that he and his Korean friends found the press behavior insulting. ‘Nearly every question presupposes a U.S. right to dominate Korea and decide its fate,’ he told me in a Facebook message.”

And the insufferable mythologizing about how American presidents have never before met with dictators — ugh.

Hell, South Korea didn’t become a democracy until 1987. Before then it was run by dictators like Syngman Rhee and Park Chung Hee, who tortured dissidents.

As Shorrock quips on Twitter, “Who do you think the U.S. talked to all that time? The dictator’s valet?”

P.S. Alan Knuckman has pinpointed an anomaly that sends stocks in a vertical explosion… in 100% of the cases.

Can you imagine the wealth-building potential?

And the next episode could be just around the corner… before the Fourth of July. To learn how a $250 grubstake can turn into $10,972 in only a few days, click here.