“Tom Utley says medical marijuana allowed him to reduce his use of prescription painkillers by 98% over the past year and a half,” says an article in the Springfield, Illinois, State Journal-Register.

Mr. Utley, now 42, was injured in a car accident when he was just fifteen. To manage chronic pain, he resorted to opioids, regularly downing Vicodin and OxyContin pills four times a day.

“Now he takes prescription opioids only a few times each month.”

Utley has access to marijuana — and cannabinoid products like patches and lotions — because he qualifies for Illinois’ medical marijuana pilot program started in September 2014. The program has approved applications for 36,800 patients since and licensed 54 medical cannabis dispensaries.

This week, the Illinois General Assembly will vote on Senate Bill 336 — Compassionate Use of Medical Cannabis Pilot Program Act — to “allow people who have been or could be prescribed opioids to apply for acceptance into the program.”

“Utley is among those who see expanded access to medical marijuana for people in pain as one solution for the nationwide epidemic of addiction to… opioid painkillers,” the article continues.

And addiction commonly leads to overdose. In Illinois last year, there were about 2,000 fatal and 14,000 nonfatal opioid overdoses.

Nationwide, the number is dumbfounding. Unofficial results put the number for fatal opioid overdoses at roughly 62,500 in 2017, according toThe New York Times. (By way of comparison, about 58,000 U.S. soldiers died in the entire Vietnam War.) 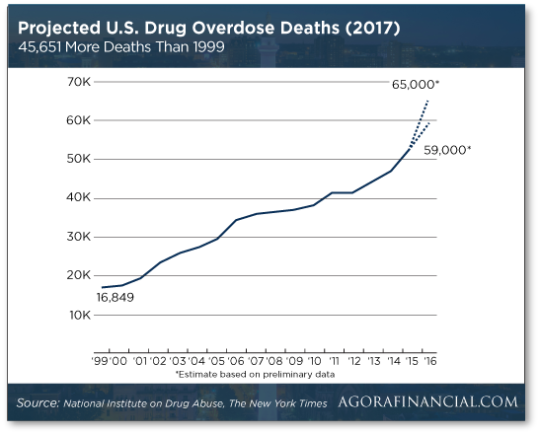 For Mr. Utley, there’s no question: Medical cannabis has helped him regain control of his life without the ugly side effects of opioids — especially physical dependence.

“I think it [medical cannabis] would be a way-better alternative,” he says. “There is so much… science behind it now.”

But the science behind medical marijuana is lost on Robert Patterson, acting administrator at the Drug Enforcement Administration.

Well, not “lost” exactly. He’s just never taken the time to follow up on the science…

Which is inexcusable considering Acting Administrator Patterson serves as “the principal adviser to the attorney general on… drug control policy and related operations of the United States,” according the DEA’s website.

Meaning: Mr. Patterson has the ear of Jeff Sessions on all things drug-related. 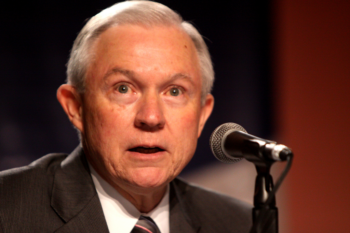 Mr. Sessions is a stalwart anti-marijuana crusader, once calling it only “slightly less awful” than heroin. More importantly, he recently unraveled Obama-era rules that held the feds at bay in states where marijuana’s legal.

While Patterson has an opportunity to influence the attorney general’s low opinion of legal marijuana, he’s admittedly uninformed.

On May 8, the House Judiciary Committee held a hearing entitled Challenges and Solutions in the Opioid Abuse Crisis to which Patterson was invited to speak.

“While opioids were the topic,” says an article at Entrepreneur, “marijuana repeatedly came up during Patterson’s testimony.”

According to the article, when pressed on the medical marijuana data, Patterson claimed ignorance on the following:

Finally — and this is inconceivable — when Patterson was asked what he would recommend as an alternative to opioids for chronic pain sufferers, he said “Tylenol.” (No words.)

In Ray Blanco’s informed opinion: “There’s no question that marijuana is a safer alternative to opioids — and there are some major societal benefits to moving more people to pot.

“Of course,” Ray continues, “the politics of marijuana have been an obstacle.”

As previously mentioned, in January when Jeff Sessions reversed the rules on the federal ceasefire against legal marijuana, he “dropped a bombshell on the legal pot market.

“In the months since,” Ray says, “domestic pot companies have corrected hard, pressured in large part by fears that the government could crack down on businesses operating legally in their states.

“But as I expected, Sessions’ attempt to make life harder for pot companies is backfiring,” Ray goes on.

“It’s actually speeding up the push toward legalization at a federal level,” Ray says.

He goes on to say: “I’m hearing rumblings from sources that another wave of pressure to remove cannabis from the top of the DEA drug schedule is going to be happening in the coming weeks.”

“All I can say is circle June 7 on your calendar,” he continues. That’s when Ray reveals the details of all his favorite penny-pot stocks… click here now.

To the markets, which are selling off on the latest trade-war news.

This morning the president confirmed he’s imposing steel tariffs on the European Union, Canada and Mexico, effective tomorrow. With that, the Dow is down about 1%, wiping out most of yesterday’s gains. The small-cap Russell 2000, however, is off only a quarter-percent from yesterday’s record close; small-cap stocks have less exposure to global trade.

“You’ve probably heard the old adage before,” says our resident quant Jonas Elmerraji, “‘Sell in May and go away.’

“It’s a saying that gets thrown around like clockwork each year,” he says, “along with the Super Bowl indicator and the January effect.

“Thing is, there’s actually some strong historical evidence,” Jonas says, that selling stock positions in May and re-entering the market in October or so — after the summer market doldrums — actually makes sense. 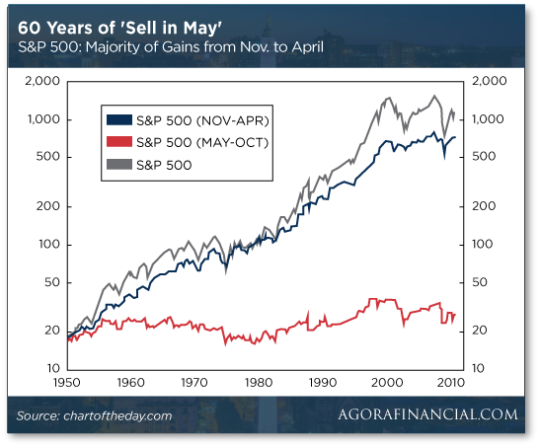 “Research stretching all the way back to 1950 shows that the stock market tends to have lower performance during the summer months,” says Jonas.

“Just by avoiding that sideways period on the chart, you could increase your returns on the S&P 500 by 24% every year while sitting on cash for 41% of the year.”

So with just a few hours remaining in the month, is it time to sell your entire stock portfolio? Not so fast, says Jonas…

“While ‘Sell in May and go away’ has worked most years… it doesn’t work every year,” he says.

“Luckily, our Kinetic tools give us a way to figure out whether the summer months are likely to be bad for investors in 2018.

“The answer lies in the Kinetic Score,” says Jonas.

“A Kinetic Score measures how closely a stock (or index, in this case) is following its Kinetic Composite in real-time.” This is data drawn from his proprietary Archimedes trading platform.

“This year the S&P is tracking a Kinetic Score of zero,” Jonas says, “meaning the market is less likely to follow the model of weak summer trading in 2018.”

That’s a major reason to ignore the “Sell in May” guidance.

“While it’s true that there are generally fewer Kinetic Windows that open during the market’s quieter summer months,” says Jonas, “I’m seeing some consistent buy signals coming down the pike.

“I’ll let you know the minute it is time to buy.”

“We’re about to see some big changes to the way the mega-banks in the United States are regulated,” says Zach Scheidt.

Yesterday the Federal Reserve decided to move forward with revisions to the Volcker Rule — 1,000 pages of regulations put into effect under the Dodd-Frank Act of 2010.

The Volcker Rule “is aimed at preventing banks from making market bets while accepting taxpayer-insured deposits,” according to the Reuters newswire.

Its repeal is favored by many bankers and investors alike.

“First, relaxed standards for bank trading should lead to higher profits for banks. While trading desks for the biggest financial institutions still cannot go crazy investing their capital, they will still be able to book huge profits,” Zach says.

“The second reason we care about this change is that banks should help the market become more liquid. Which means we can more easily buy and sell investments.

“A liquid market is good news for all investors,” Zach says.

“Another piece of the banking regulations on the table… is the capital requirements that currently restrict what banks can do with their cash.

“Initially, these rules were set to protect the public from big banks taking too much risk with their money and triggering another financial crisis,” says Zach.

“But now, those rules have led the big banks to keep way too much cash on their balance sheets — cash that could be put to better use if capital requirements were more relaxed.”

Banks will have greater discretion when it comes to lending money to individuals and businesses. This money should spark new growth and, Zach reasons, “our economy will become more robust.”

“Also, much of this capital will be sent to investors through higher dividends this year.

“We’re already seeing banks increase the quarterly dividends paid to investors and those payments are only going to get bigger throughout the year,” Zach says.

“Once that cash is paid to investors, it can be used to both cover life expenses and to reinvest in companies with better growth opportunities.

“In short, looser regulations — starting with the Fed’s vote — will lay the foundation for more healthy growth for years to come.”

Beaver v. Alligator: Can you tell the difference?

If it were a death match between the mammal and the reptile, the outcome’s a lock.

But can you tell the difference between these two animals? 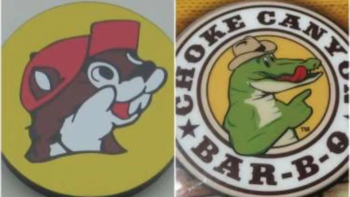 According to a Texas jury, you can’t.

“Last Tuesday, the jury held that the alligator logo (on the right) was too similar to the beaver logo (on the left),” according to the website Lowering the Bar — that takes a cheeky look at jurisprudence… .yes, really.

“And so the company that runs Choke Canyon travel stops will have to pay Buc-ee’s Ltd. for trademark infringement.”

You can probably guess which one’s Buc-ee’s logo….

“‘It’s absolutely not about a beaver versus an alligator,’ insisted Buc-ee’s general counsel, although it kind of seemed like it was.” Heh.

Buc-ee’s representative goes onto note there are more than “10 similarities between the two marks.”

Buc-ee’s didn’t specify the similarities, but we’re game… we’ll take a crack at it.

The website gets to the crux of the legal matter: “It’s whether there is a real likelihood that consumers would confuse the two marks, and that seems pretty unlikely here because, you know, they don’t look similar at all.”

“As a 30-year employee of the Social Security Administration, now retired,” a reader writes, “I will just say…

“Since the act’s passage in 1935, every generation yet to collect its share of benefits has publicly proclaimed, ‘We will never collect any benefits because there will be nothing left.’

“While no one can see the future with any certainty, if someone were to force me to predict whether 60-somethings would live to collect their share, I would say that’s the way to bet.
“And delaying it until age 70 would be a good idea if one has a reasonable expectation of living into his/her 80s and doesn’t need current income.

“I used to tell claimants that deciding when to start benefits was easy only if they knew how long they would live. That’s really what it comes down to.”

By the way, the mailbag’s overflowing with readers’ responses to yesterday’s prompt: When do you intend to start collecting Social Security?

P.S. While this opportunity is not right for everyone, anyone willing to learn how to invest in a contrarian way has a chance to completely change their lives.

And we’ve got a way you won’t pay a dime… Click here for more information.