The End of the Community Bank (Continued)

Prediction fulfilled: “My prediction for 2018,” Agora Financial’s Zach Scheidt said in his space on Jan. 4, “is that Congress will roll back parts of the Dodd-Frank Act.”

As you might recall, Dodd-Frank was Congress’ ham-fisted attempt to rein in the banks after the Panic of 2008. In the end, the too-big-to-fails are even bigger now than they were a decade ago.

Anyway, Zach’s prediction is coming to pass. Yesterday, the House passed legislation with bipartisan support — after having passed the Senate in March. It now awaits the president’s signature.

Now that it’s nearly a done deal, we tease out a few of the implications.

The most significant change is to what Zach calls “perhaps the oddest section of Dodd-Frank.”

It’s the definition of a “systemically important financial institution,” or SIFI — basically, a too-big-to-fail.

“SIFIs are considered to play such an integral role in the American economy that letting them go out of business would torpedo the entire financial system,” Zach explained at the start of the year.

Under Dodd-Frank, a SIFI is valued at $50 billion or higher. “The rule means that a lot of banks have been swept into this category, putting them in the same league as the giant mega-banks — despite having less money to jump through all the hoops Dodd-Frank requires,” Zach elaborated.

The new SIFI threshold is much higher — $250 billion.

“What this means for banks (and investors) is that only 12 U.S. banks will be included in this new category,” Zach tells us now. “That’s down from 38 banks that are currently regulated at the highest levels.

“This is great news for smaller and midsize regional banks that don’t really have the resources to keep up with the required regulations.

“There are several regional banks that have been very close to the $50 billion level that decided not to grow any bigger just to avoid these regulations.”

As it turns out, this change is A-OK with former Rep. Barney Frank (D-Massachusetts), co-author of the 2010 law. “Fifty [billion dollars] was wrong,” he told CNBC in March. “It was too low.”

Hmmm… In his post-congressional career, Frank is a director at New York-based Signature Bank — a regional bank with assets of… drumroll, please… $44 billion.

Of course he thinks $50 billion is too low. (CNBC left this pertinent fact out of its story. Politico and The New York Times committed the same lapse when citing Frank’s position on the $50 billion threshold.)

Under the revised law, regional banks “will be free to grow,” says Zach, “without having to set aside a big part of their budget to hire staff and implement systems to keep the banks in compliance.”

They will also be free to acquire other banks. After Senate passage in March, regional banks in Virginia, Ohio, Mississippi and Wisconsin wasted no time announcing buyouts of smaller rivals. 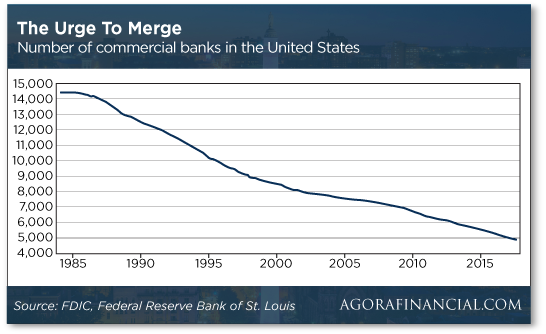 But right now, he’s spying a potential takeover in a completely different sector. Profit potential of the target company? Up to 8,956%. Zach says if you want in, you’ll need to act by June 20 — for reasons he explains when you click here.]

After we went to virtual press yesterday, the president expressed pessimism about the trade talks with China… and suggested his June 12 summit with North Korea’s Kim Jong Un might not take place after all. The Dow has shed about 250 points since.

[We didn’t mention it at the time, but we’ll mention it now: Because the president can no longer tout record highs in the stock market, he’s adjusting his message. Speaking to a crowd in suburban Detroit last month, he said, “The stock market could have been up 60%, but I have to do things. I can’t let other countries take advantage of us. The country is doing much better than the stock market.”]

Not helping matters — a lousy two days for retail…

“The not-so-hidden message in the move is that the old-school department stores are not long for this Earth,” observes Greg Guenthner.

Crude prices are pulling back after the latest weekly inventory numbers from the Energy Department… but a barrel of West Texas Intermediate still commands $71.37.

Meanwhile, an annual survey from GasBuddy finds that 58% of respondents say they’ll take a road trip this summer — down from 82% last year. And 39% say their summer travel plans are being affected by high gas prices — up from only 19% last year.

Yes, gas prices have been much higher within the last five years. But as we said last month, people have gotten used to low prices. It’s not high prices that change people’s behavior — certainly they didn’t from 2011 through mid-2014 — but the shock of rising prices can.

Gold’s recent spill below $1,300 is disappointing but not surprising, in the estimation of Jim Rickards.

“Those head winds consisted of Fed rate hikes, Fed balance sheet reductions, higher real rates and a much stronger dollar. Any one of those factors is negative for gold prices. All four in combination are a recipe for price declines.” Reality finally caught up to the price last week.

In the first scenario, economic growth starts to accelerate: “If that’s true, then the Fed is way behind the curve. Yes, the Fed will raise rates, but tight labor markets and rising inflationary expectations will cause inflation to run ahead of the Fed’s rate hikes. This will turn positive real rates into negative real rates quickly. That’s an ideal environment for much higher gold prices.”

In the second scenario, wage growth remains moribund — keeping a lid on inflation. “Stagnant wages, higher mortgage rates and reduced base money all at once are a recipe for a recession. As the economy tips toward recession, the Fed will have to reverse course. At that point, gold will soar on the perception that the Fed is once again throwing in the towel on tightening.”

If you’re familiar with Jim’s thinking, you know he leans toward the second scenario. But either way, he says it’s good for gold. “The next few months could still be a bumpy ride for gold, but late summer and fall look promising for a push to $1,400 per ounce or higher.”

There’s another factor at work, too… but that will have to wait till tomorrow.

Even if the aforementioned Trump-Kim summit doesn’t happen, it’s opened our eyes to the strange world of “challenge coins.”

As you might have heard, the White House has issued a commemorative coin in advance of the event. The mockery in the Twittersphere has been relentless, especially among those who fancy themselves leaders of the #Resistance… 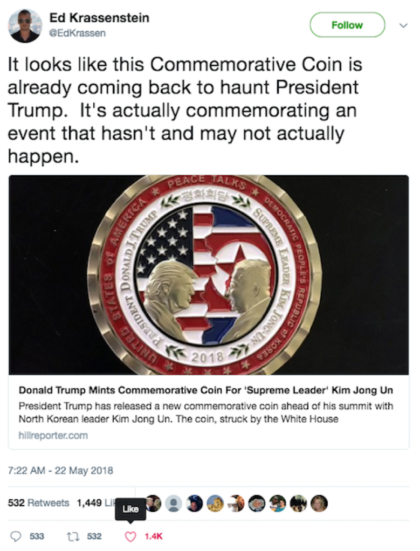 “The item was minted by the White House Military Office,” explains The Independent, “ahead of the U.S. president’s planned summit with the North Korean leader in Singapore next month.”

OK, fine. But that’s all surface stuff. Here at The 5 we were consumed by questions like: How often are these tokens issued? And — here’s the financial angle — do they have collector value?

The medallion follows in the tradition of “challenge coins” that have been distributed among members of the military for centuries.

“One of the earliest known examples of an enlisted soldier being monetarily rewarded for valor took place in Ancient Rome,” says an article at Mental Floss.

“If a soldier performed well in battle that day, he would receive his typical day’s pay, and a separate coin as a bonus.

“Some accounts say that the coin was specially minted with a mark of the legion from which it came, prompting some men to hold on to their coins as a memento, rather than spend them,” the article continues.

For American soldiers, challenge coins really took off during the Vietnam War when the custom of handing out a “last resort” bullet for accomplishing a mission was replaced with — gulp — a less macabre alternative.

Special forces started giving what amounted to “common currency with the unit’s insignia stamped on one side,” Mental Floss says, “but the men in the unit carried them with pride.

“Soon nearly every unit had their own coin, and some even minted commemorative coins for especially hard-fought battles to hand out to those who lived to tell the tale.”

The practice continues today and has expanded — exponentially.

As we mentioned before, the job of minting these medallions — made of pewter, copper or nickel and made in America, of course — belongs to the White House Military Office. (If you’re interested, coins are sold at The White House Gift Shop; they range from about $6 to $40.)

Wondering just how collectible these coins are?

We did a little snooping at eBay where we plugged in “presidential challenge coins” in the search engine — there were 238 results. Prices range from 16 cents (Trump MAGA coin) all the way up to $495 for a set of six presidential coins (in a handsome box).

We also found this gem… 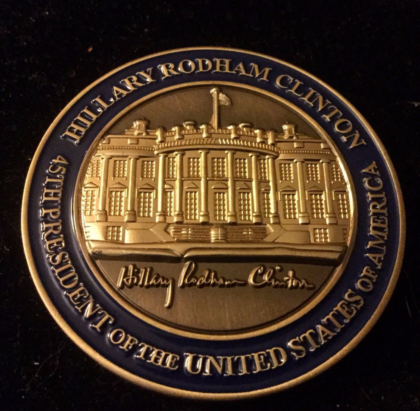 “Do not buy fake — buy mine,” says the listing
[photo from eBay listing]

Did you look closely?

Heh… we think this is similar to the scads of hats and T-shirts printed for the Super Bowl — declaring the losing team “champs.”

This particular HRC misprint goes for $65 on eBay… and the seller will throw in a free Russian challenge coin. Hmmm…

So the Trump peace summit coin’s in good company; there’s a precedent for jumping the gun when it comes to minting these commemorative tchotchkes.

On second thought, in light of the purpose of the impending peace summit — to tamp down the threat of all-out nuclear war — “jumping the gun” might be a poor choice of words…

P.S. After a quiet few months, everything is starting to move very fast again for penny pot stocks.

We’ve described much of the action in recent days — big mergers, opportunities for publicly traded companies in Colorado and still more states looking to legalize.

But America’s No. 1 pot stock expert Ray Blanco says the biggest shift of all could come just two weeks from now. Play it right and it could be worth $1.2 million. Ray explains right here.