It was a time of a weak economy… a soaring cost of living… and, worst of all, this: 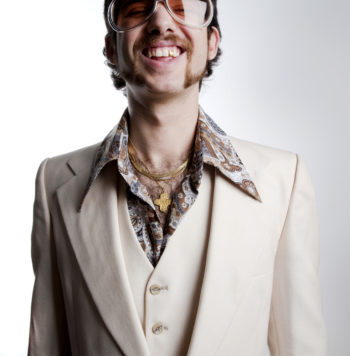 And while it’s unlikely the leisure suit will make a comeback anytime soon, “stagflation” is lurking in the shadows — ready to make its presence felt at the very time Donald Trump would be seeking a second term.

“We’ve seen this movie before in the late 1970s,” says Jim Rickards. “Get ready for the rerun.”

To understand why, we rewind to the early 1970s.

Richard Nixon was gearing up for re-election in 1972. He put tremendous pressure on Federal Reserve Chairman Arthur Burns to keep interest rates low.

The Fed likes to make a big deal about how it’s “independent” of political influence. “Nothing could be further from the truth,” says Jim.

“In reality, the Fed is a highly political institution. It’s just that they do a better job of hiding their politics than most inside-the-Beltway organizations. The Fed can support or frustrate White House policies by easing or restricting monetary policy to counteract the effects of tax cuts, increased spending or budget belt-tightening.”

Burns accommodated Nixon’s “request” in the early ’70s. Many observers recognized that such a policy was setting up the United States for near-runaway inflation a few years down the line. As legend has it, a German reporter asked Burns why he did it. Burns replied that a Fed chairman has to do what the president wants or else “the central bank would lose its independence.” Heh…

The effects made themselves felt — hard — a few years later. “The dollar lost half its value from 1977–1981,” Jim reminds us, “as a result of the inflation caused by Burns from his earlier easy money policies.”

Now we fast-forward to 2017… and we get a glimpse of how Donald Trump views the Fed and its claim to “independence.”

A few days ago we mentioned the Oval Office interview the president had with one of his finalists for the Fed chairman job last year. Kevin Warsh is his name. Speaking to Politico, Warsh said the president badgered him about keeping interest rates low.

“If you think it was a subject upon which he delicately danced around, then you’d be mistaken. It was certainly top of mind to the president… The president has a view about asset prices and stock markets. He has a view based on his long history in his prior life as a developer and real estate mogul of the role of interest rates.”

Fed independence? “In some sense, the broader notion of an independent agency, that’s probably not an obvious feature to the president.”

Warsh didn’t make the final cut. Back he went to his gigs at Stanford and on the board of UPS. Jay Powell got the job.

“The fear is that Trump pressures Jay Powell to keep rates low even if it means higher inflation,” writes Politico’s Ben White, who got Warsh to open up about his Oval Office encounter.

Not to put too fine a point on it, White adds, “This scenario occurred in the early 1970s when President Richard Nixon pressured then-Fed Chair Arthur Burns to maintain a loose monetary policy heading in the 1972 election. In the subsequent years, inflation spiked over 12%.”

Jim Rickards’ take? “We are now entering a new age of explicit political pressure on the Fed to keep interest rates low.

“This pressure will not be exercised immediately,” Jim hastens to point out.

“Rates are still fairly low and the stock market is holding up despite being below the Jan. 26 highs. The economy is doing OK, if not great. Unemployment is at an 18-year low and expectations are high that recent tax cuts will provide additional stimulus and help boost U.S. growth. There’s no urgency about the impact of interest rates at the moment.

“But the bigger picture is that Powell and the Fed are on track to raise interest rates to the 3.25% level by early 2020. [At present the fed funds rate is a hair below 1.75%.] They probably won’t get there before a recession strikes. At that point, the stock market will crater and the political pressure from the White House to cut interest rates will be overwhelming.

“If the Fed cuts rates with a still-bloated balance sheet, tight labor markets and trillion-dollar deficits, you can look for another episode of ‘stagflation.’”

But that’s all in the future. Today, stocks are in rally mode — supposedly because the on-again, off-again trade war with China is off again.

Treasury Secretary Steve Mnuchin said yesterday Washington is “putting the trade war on hold” and would not slap tariffs on Beijing as long as the two sides keep talking.

With that, the major U.S. stock indexes are jumping. Not surprisingly, it’s the multinational giants leading the way, with the Dow up 330 points as we write — back above 25,000. That said, the small-cap Russell 2000 is also in the green — reaching further into record territory.

Crude is taking another run at the $72 level, perhaps because of uncertainty over Venezuela.

The socialist president Nicolás Maduro won re-election yesterday; the opposition sat out the balloting. U.S. sanctions against Venezuela’s oil industry are under “active review,” according to Deputy Secretary of State John Sullivan.

That said, it’s not as if sanctions would take that much more oil off the world market. Sheer mismanagement under Maduro has collapsed oil production from 2.3 million barrels a day in early 2016 to 1.4 million now.

The press is having a field day with this one: Google quietly scrubbed its “Don’t be evil” preamble from its corporate code of conduct.

While we can’t nail down an exact date, sometime between April 21 and May 4 Google removed the phrase — and an entire paragraph — from its employee handbook.

“The updated version of Google’s code of conduct still retains one reference to the company’s unofficial motto,” associated with the company since 2000, says an article at Gizmodo.

“The final line of the document is still: ‘And remember… don’t be evil, and if you see something that you think isn’t right — speak up!’”

Google employees are taking that “speak up” thing seriously…

An article at Global News says: “[On April 19] over 3,000 Google employees… signed a petition in protest against the company’s involvement with a U.S. Department of Defense artificial intelligence (AI) project that studies imagery and could eventually be used to improve drone strikes in the battlefield.”

The project is working to develop “computer-vision algorithms needed to help military and civilian analysts encumbered by the sheer volume of full-motion video data that DoD collects every day in support of counterinsurgency and counterterrorism operations,” the Pentagon says.

Speaking plainly, the project’s objective — using AI technology — is to speed the process of sorting drone footage to identify images of objects and people.

“We have long worked with government agencies to provide technology solutions,” says a Google statement. “This specific project is a pilot with the Department of Defense, to provide open source TensorFlow APIs that can assist in object recognition on unclassified data.

“The technology flags images for human review,” Google continues, “and is for nonoffensive uses only.

The petition against Google’s involvement in the DoD project says, “We believe that Google should not be in the business of war.” Period.

Last Monday about a dozen Google employees resigned to protest the company’s association with Project Maven.

“The resigning employees believe that Google’s work on Maven is fundamentally at odds with the company’s do-gooder principles,” says Gizmodo.

“It’s not like Google is this little machine-learning startup that’s trying to find clients in different industries,” says one employee who resigned. “It just seems like it makes sense for Google and Google’s reputation to stay out of that.”

“Over the last couple of months, I’ve been less and less impressed with the response and the way people’s concerns are being treated and listened to,” another resigning Google employee told Gizmodo.

So… here’s a brief timeline:

April 21–May 4, 2018 — Google removes the preamble of its corporate code of conduct, including the phrase “Don’t be evil”

May 14, 2018 — About a dozen Google employees resign in protest of the company’s involvement in Project Maven.

We’ll leave it to you to connect any dots…

“Your commentary was interesting — but it doesn’t go far enough,” a reader writes after we tackled Donald Trump’s efforts to save the Chinese mobile phone giant ZTE.

“If your explanation sufficed, then why start a trade war with China over steel and aluminum? The lesson of history you cite would have been brought to POTUS 45’s ear before the trade war began. And 80,000 jobs is, as they say, a drop in zee bucket.

“Instead, maybe 45 was told soooon after China’s announcement last week that they had curtailed purchases of U.S. Treasury bonds and decided that a deal was in order, i.e., you will continue to buy our bonds if we put the ZTE operation back in business by shipping more of those made-in-USA circuits. Ah-ha! Remember, if the enemy has you by the short hairs it pays to plan for him to execute his advantage when he’s pushed far enough.

“If the Chinese made good their threat, the entire Korean peace talk calculus could be disturbed. And Xi Jinping has to play his part to keep those talks going because that’s part of his deal with 45.

“No, there’s more to this than meets the eye, but that’s daily fare in international politics.”

The 5: We explained three weeks ago how China’s much-hyped “nuclear option” of unloading its Treasury holdings is in fact a dud.

“If China did sell some of their Treasuries,” Jim Rickards explained, “they would hurt themselves because any increase in interest rates would reduce the market value of what they have left.”

And even if Beijing did pursue this course of action, “the U.S. president could stop it with a single phone call to the Treasury. That’s because the U.S. controls the digital ledger that records ownership of all Treasury securities. We could simply freeze the Chinese bond accounts in place and that would be the end of that.

“So don’t worry when you hear about China dumping U.S. Treasuries. China is stuck with them. There is no nuclear option in the Treasury market.”

P.S. Colleague Alan Knuckman is used to doing media interviews. But recently he turned the tables and became the interviewer… and what he captured on video is making some of Wall Street’s heaviest hitters livid.

Alan spoke with a man — we’ve concealed his identity — who’s revealing how everyday Americans can siphon up to $35,700 direct from Wall Street’s pockets, every week.

You can watch the interview right here.