Beer vs. Weed: Who Wins?

“The marijuana dispensary was not what I imagined,” reports our Zach Scheidt from Las Vegas. “It’s essentially an upscale pharmacy.”

Zach is in Sin City this week attending the annual MoneyShow — an event so huge, it takes up space in both the Bally’s resort and the sister property next door called Paris.

The talk of the gathering this year? It’s pot — not least because recreational cannabis is now legal in Nevada. You can buy, legally, only steps away from your hotel.

Of course Zach was compelled to investigate — for professional purposes only, we assure you; he does not partake. “The staff were informed and professional and knew all of the details on their products and the local laws surrounding marijuana,” he tells us. (Smoking in public? That’s a $600 fine.)

“They also told me business has been cranking since they opened for business last July.”

Meanwhile, one of the most-attended events at the show featured Gene Simmons of Kiss fame, evangelizing for a favorite name in the cannabis sector. 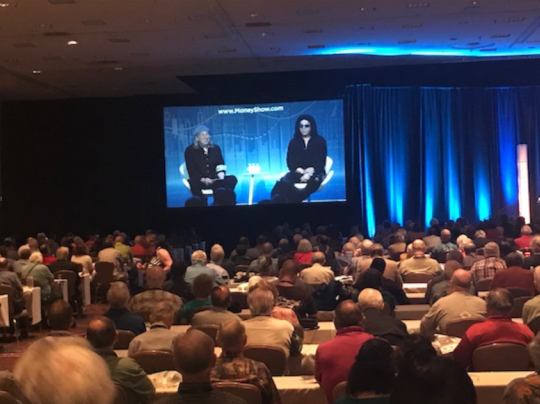 We’ll spare you the trouble of looking it up: “The Demon” turns 69 in August…

How big a draw was Simmons? “As I walked down the hallway past the exhibit hall and toward the convention ballroom I didn’t see a single soul,” says Zach. “It was like a ghost town!

“Simmons had some great advice when it comes to doing your research and investing in companies you actually know about. For Gene, this means investing in Invictus MD (OTCBB: IVITF). It’s a Canadian cannabis company dedicated to providing marijuana to both the medical and recreational markets.”

Zach spent only a few minutes peeking in on the Simmons event. The MoneyShow attracts tens of thousands of mom and pop investors… but for Zach the real attraction is what happens away from the conference rooms and exhibit floors. It’s a chance for investing pros to rub shoulders and trade scuttlebutt.

And there’s one question on the minds of the pros in Vegas: “Who has the most to lose if marijuana goes ‘legit’ across the country?” is how Zach poses it.

Answer — the booze makers and distributors.

“At the rate alcohol consumption is dropping in states with legalized weed,” Zach tells us, “drink makers are looking at an annual loss of $31.7 billion every single year once marijuana become legal in all 50 states! And according to Cowen and Co. Analysts… ‘mainstream beer’ is ‘under siege’ from legal marijuana.”

The takeaway from Zach’s discussions on the sidelines of the MoneyShow: “If the beer industry doesn’t take control of the booming marijuana industry, they’re done for.”

Zach has been in constant touch this week with his research team at Agora Financial headquarters in Baltimore. They’ve been chasing down the leads he’s gotten in Vegas, trying to identify the most likely and lucrative takeover candidate.

Their conclusion: Anheuser-Busch is zeroing in on one specific microcap marijuana company. It currently trades for $2 a share. Profit potential once a deal goes through? 8,850%. Every $2 becomes as much as $179.

“This is a huge, unstoppable trend,” Zach says. “And it’s staring us in the face.” Follow this link and he’ll tell you why he’s set such an ambitious profit target.

[Ed. note: We’re not trying to steal any thunder from our Ray Blanco, who’s been keen to the cannabis story for two years now. It’s not for nothing his publishers now promote Ray as “America’s No. 1 Pot Stock Expert.”

But as we showed you with the Gene Simmons event in Vegas, the sector is getting attention like nothing else this year. And the takeover opportunity Zach unearthed during his meetings is too good to pass up.]

The Russell 2000 notched an all-time closing high yesterday, and it’s powering higher as we write this morning — up another two-thirds of a percent — while the Dow is barely squeezing out a tenth of a percent gain.

“Large caps enjoyed a big head start in 2018 as mega-cap tech stocks blasted higher during a breakneck market melt-up,” colleague Greg Guenthner writes in today’s Rude Awakening. “But smaller stocks quickly caught up as the market corrected. The small-cap Russell 2000 is now up more than 5% year to date, while the S&P 500 is up a little less than 2%.” 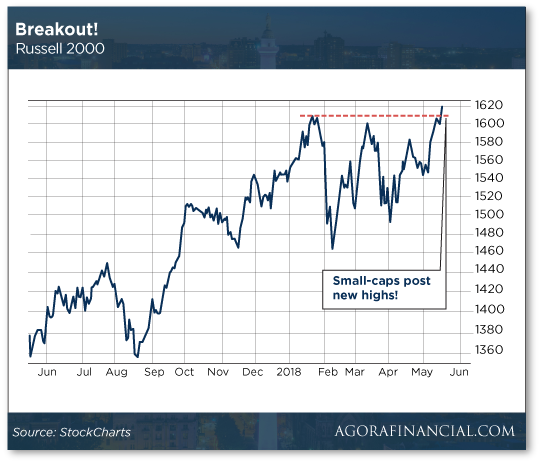 In addition, corporate tax cuts are having an outsized impact on small caps; typically small caps pay a higher effective rate than the big boys.

“I’ve got eyes on $100 crude,” says Alan Knuckman from his perch in the Chicago options trading pits.

You might have seen headlines this morning about $80 crude. To be clear, that’s Brent crude — which is the benchmark in most of the world. But in the United States, the standard is West Texas Intermediate… and that’s pennies away from cresting $72. Both figures are the highest since November 2014.

Here’s his thinking: “In 2015 when gas was cheap, many people bought gas guzzlers and also drove a lot more.

“Summer vacation is right around the corner. American families are about to hit the road to travel around the country. Driving less fuel-efficient cars they bought just a few years ago, they will be filling up more frequently.

“Granted the American people might not be loving this but oil companies are jumping with joy.

But by investing in oil and gas companies now, you taste in the profits that come with higher energy prices.”

Speaking of energy, one of Europe’s giants says it will fold and cooperate with Washington’s revived sanctions against Iran.

The French energy firm Total signed a billion-dollar contract last year to develop the next phase of Iran’s South Pars natural gas field. Now Total says it will wind down that operation by November. That’s on top of other big European firms like Siemens and Maersk saying they’ll do likewise with their Iranian ventures.

European Union politicians, for their part, are still talking about putting up a fight — perhaps passing legislation that would ban companies from complying with the sanctions. How they’d enforce that law when the companies still conduct most of their transactions in dollars no one has explained yet.

[Worth watching: The Russian press has a story this week about the EU ditching the dollar in favor of the euro for Europe’s oil purchases from Iran. But the story is thinly sourced, so we’re not taking it seriously until we see further confirmation.]

Meanwhile, the looming Iran sanctions are giving a sudden boost to those new oil contracts trading in Chinese yuan.

We mentioned when the contracts began trading in Shanghai the last week of March. Last Wednesday — the day after Donald Trump announced the renewed sanctions — daily trade volumes hit a record 250,000 lots. That was double the figure of the previous day.

“The jump helped the front-month Shanghai futures contract account for 12% of the global oil market last week, up from just 8% in week one,” reports the Reuters newswire.

It’s still a slow-motion process, but the Iran sanctions are speeding it up. And as Jim Rickards told us last fall, the end goal is “a new international monetary order that does not involve dollars.” If you’re wondering what such a world would look like, Jim shares a few harrowing ideas at this link. Warning: It’s not for the faint of heart.

“OMG, what a great ‘new’ idea!” a reader writes after yesterday’s episode, the snark turned up to 11. “Liberty Vouchers, come and get them before it’s too late.

“Why use this carnival barker come-on to sell a newsletter that touts nothing more extraordinary than ADRs, which have been around for decades?

“Do you really catch any keepers that way that you couldn’t get with an honest straightforward pitch without the unreal hype?”

The 5: Sometimes it takes a little “transubstantiation” to make people sit up and take notice. Foreign stocks that you can easily buy on a U.S. exchange? Boring. “Liberty Vouchers?” Kinda sexy, no?

Another classic example: Years ago we were extolling the virtues of “Scandinavian Income Certificates.” They were, in fact, their own form of Liberty Voucher — dividend-paying shares of Statoil, the Norwegian state-owned oil company, traded on the NYSE.

The share price didn’t do much over the three and a half years STO was part of the Lifetime Income Report portfolio… but they threw off a respectable dividend at a time the Fed’s “zero interest rate policy” made fixed-income investments a sure loser. Presumably readers were happy… and how many of them would have even considered an income vehicle like that if a skilled copywriter hadn’t conceived such a “carnival barker come-on”?

“Personally, I did not find any comment of yours denigrating Trump — you are just mentioning fact,” writes a reader from Switzerland, rising to our defense.

“I read your daily comment with much pleasure and appreciate your politically quite neutral approach of facts. That critical reader of yours should read [another e-letter published by our firm], a complete Trumpist rag, about as extremist as Newsmax, which I no longer read.

“Carry on with your commenting. Do not alter it. Those daily 5 Mins, sometimes more, are more than appreciated.”

The 5: Thank you for recognizing we merely call it as we see it, and we don’t care who it reflects well or poorly on.

And because that’s the place where we come from, we’ll throw a bone to the cult of MAGA today, seeing as the Mueller investigation is now one year old. What does Mueller have to show for it?

We turn it over to Bloomberg opinion columnist Leonid Bershidsky (who despite his name is no Putin fan — indeed, he left Russia for Germany in 2014 after the annexation of Crimea)… 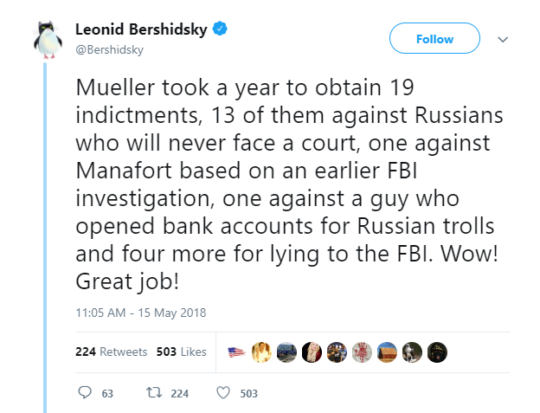 In follow-up tweets, Bershidsky reminds us no one has yet been indicted for hacking the Democratic National Committee or Hillary Clinton’s campaign chairman John Podesta. Easy to forget, but those are the events that started the whole “Russian collusion” thing in the first place.

Meanwhile on the campaign trail, Sen. Amy Klobuchar (D-Minnesota) — who’s up for reelection this year — says when she talks to voters, “They’re not asking me about Russian bots, OK? They’re asking me about, like, soybean exports. This is a true story, I spent days in the rural part of our state.”

But from Democratic Party HQ, it’s all Russia all the time. Reminds us of the Bourbons in France as (supposedly) described by Talleyrand: “They’ve learned nothing, and forgotten nothing.”

P.S. The aforementioned Alan Knuckman is on a roll in Weekly Wealth Alert. Readers were filled today on Intel call options — good for 51% gain in only 10 days. Also today, he urged them to put in a sell order on Halliburton calls. Once those orders are filled, it should be another 51% gainer for a trade laid on less than three weeks ago.

Alan’s next recommendation is due Monday. Click here and see how adding Weekly Wealth Alert might be the best “upgrade” you could make to your account with us.