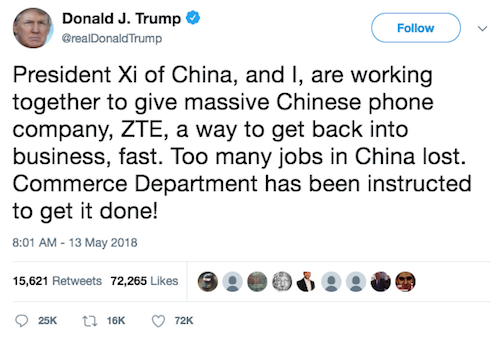 This is the guy who campaigned on a platform of China-bashing in the name of supposedly creating more American jobs. What gives?

The answer, we suspect, is rooted in centuries of history. You won’t read about this from the mainstream.

It was a near-fatal blow for ZTE. About a quarter of the components that go into ZTE’s phones and networking gear are made in America. Without those parts, the company had no choice but to suspend operations and start planning to wind down for good.

That’s 80,000 jobs in jeopardy for a company based in China’s fourth-largest city.

Imagine a company based in Houston, employing 20,000, that suddenly faced shutdown. Perhaps someone, in Washington or Beijing or both, impressed that analogy on Donald Trump. (It’s another vivid illustration of how U.S. sanctions make Washington “the economic policeman of the planet,” to use the words of the French finance minister we cited on Saturday.)

Except in China it’s not just about the jobs — it’s about the Communist regime’s very survival.

We return to a passage from Jim Rickards’ first book, Currency Wars, published in 2011. We’ve cited it before. It’s relevant again today.

“No one knows better than the Chinese Communist Party leadership what would happen if… jobs were not available. The study of Chinese history is the study of periodic collapse. In particular the 140-year period from 1839–1979 was one of almost constant turmoil.”

It began with the Opium Wars… continuing through the Boxer Rebellion… the Japanese invasion… all the way through the Cultural Revolution.

It was only a decade after that 140-year period of nonstop chaos that the Tiananmen Square protests broke out. Little wonder the crackdown was so swift and brutal.

“The Chinese Communist Party leadership,” Jim wrote, “understood that the 19th-century Taiping Rebellion had begun with a single disappointed student and soon embroiled the southern half of the empire in a civil war, resulting in 20 million deaths.”

And so the Communist Party is obsessed with keeping the masses employed and passive.

Especially the young men, of which there are too many — thanks to the one-child policy in force between 1979–2016. Many couples chose to have a boy. Result: By 2020, the government estimates men of marrying age will outnumber women by at least 30 million. Talk about a powder keg.

As we said in 2015, the Chinese Communists are no different from the emperors of old — they rely on public perception they have the “mandate of heaven” to rule. No jobs, no mandate of heaven.

If the Communist Party fell, what would come after it?

Maybe someone posed that question to Donald Trump, and maybe he figures it’s better to deal with the devil you know…

To hear the mainstream tell it, “easing trade tensions” between the U.S. and China are giving a lift to the U.S. stock market this morning.

Gold is holding onto its gains from last week at $1,319. Go figure: Gold jumped up Thursday when the consumer price index came in less than expected. Usually, gold rises when inflation accelerates. But this time it rose on the theory that lower inflation would prompt the Federal Reserve to dial back its “tightening” stance — which would result in higher inflation down the road.

“The ‘black gold’ bull market is just getting started,” says Zach Scheidt — as West Texas Intermediate begins a new week above $71 a barrel.

“Even though the per barrel price of oil is up 48% in the last year alone, we’ve still got room to run.” And that’s despite the much ballyhooed transition toward electric vehicles.

“It’s certainly true,” Zach explains, “that younger generations are extremely environmentally conscious and are leading the charge away from fossil fuels. This has led to the exponential rise of electric vehicles, which tallied 2 million globally in 2016 — up from just a few thousand in 2010.”

But that’s not the whole picture: “There are over 7 billion people living today and the vast majority of them live in developing countries like China and India,” Zach points out. “And up until recently these people have been completely shut out of the auto market.

“This will finally allow huge portions of the world’s largest country to enter the auto market for the first time. Internal-combustion engines will still be the easy choice in places like rural China due to their practicality and lower price tag. This will not only maintain the current demand equilibrium for oil but will actually increase the demand as more citizens of developing countries enter the auto market.”

Forecast fulfilled: The U.S. Supreme Court has given the states a green light to legalize sports betting.

In a 6-3 decision, the justices struck down a 1992 federal law. “Today’s decision clears the way for all states to make their own decisions about legalizing sports betting, and in one fell swoop gets rid of Nevada’s monopoly on the subject and the 1992 federal statute that had protected it,” University of Texas law professor Steve Vladeck tells CNN.

This is a ruling Agora Financial contributor Andrew Keene has been expecting for the last month. He positioned his Alpha Shark Letter readers ahead of the ruling — recommending five plays. The most speculative of the bunch is paying off huge right now — a Canadian penny stock up 22.5% as we write.

[Ed. note: Select Agora Financial readers will get an email this afternoon about a new trading strategy Andrew is unveiling. Thanks to a 15-digit code he has access to — direct from the New York Stock Exchange — Andrew says collecting thousands of dollars every week has never been so easy.

If you don’t get the email this afternoon, rest assured you’ll have access in the days to come.]

“The price of ice cream and other sweets is soaring due to the near-record price of a key ingredient — vanilla,” according to a post at AgWeb.

Last year, a cyclone hit the island nation of Madagascar, rubbing out much of its vanilla crop.

“Since 75% of the world’s vanilla is grown in Madagascar, the market is in turmoil,” says AgWeb. And now the exotic spice — weird to say that about vanilla, right? — costs more than a precious metal.

As it stands, the price of vanilla sits around $600 per kilogram while the same amount of silver goes for $538.52.

Dunkin’ Donuts CEO Nigel Travis told Bloomberg the cost of vanilla is dragging down revenue for one of its brands, Baskin-Robbins.

Smaller vendors have been similarly affected — to the point where some bakers and ice-cream makers are pulling vanilla-flavored items off the menus.

To complicate matters: “Vanilla is one of the most labor-intensive foods on Earth.”

So labor-intensive, in fact, many vanilla farmers are just packing it in.

“Vanilla beans are the seeds of an orchid.”

In Madagascar, where there is no native pollinator, “Every flower of this orchid has to be fertilized by hand, with a little stick,” says Jürg Brand, who owns a small vanilla business.

“After the seed pods are harvested, each has to be soaked in hot water, ‘and then you wrap it in woolen blankets for about 48 hours, and then you put it in a wooden box to sweat,’” Brand says.

“Later, the pods are laid out to dry in the sun, but for only one hour each day.”

By the way, “There is… a synthetic alternative — called vanillin — which is proving harder to sell than a Polaroid camera.”

Heh… that’s thanks to the demand for all organic, all the time.

“Who stands to benefit from the fallout of an intergenerational conflict?” a reader asks as an old thread stretches into a new week.

“The answer that keeps coming to me is politicians and the ‘deep state’ and their minions — Wall Street banks and brokerages and the components that comprise the military-industrial complex described by President Eisenhower. Keep the masses warring among themselves and the elites can continue to profit from their efforts.

“As the saying attributed to ‘Deep Throat’ of Watergate fame goes, ‘Follow the money.’”

“I agree with a previous reader who considers this ‘debate’ a distraction from the real issues involved.

“While I think that millennials and future generations are going to have a much tougher go than earlier generations and the majority of the damage to our economy and currency was done by people in the boomer generation, this is not the fault of the boomers per se. It is the work of that ubiquitous and amorphous group known by some as the ‘deep state.’ It is the foxes that have learned to game the system and use government and quasi-governmental groups to take from the many in order to enrich themselves.

“The entire political and economic system is broken beyond repair I fear and it is unfortunately going to take some kind of violent uprising to attempt to turn the tables on the elites and level the playing field for the masses.

“I think the big problems are our ‘fake’ money backed by nothing, manipulation of the money supply and interest rates by central banks, the unsustainable debt levels that only continue to grow, the monopoly of the political process by lobbyists and insiders and advances in technology that can sometimes kill jobs.

“It is a scary, uncertain world in which we now find ourselves.”

The 5: The striking thing about much of the feedback we’ve gotten on the boomers-vs.-millennials discussion is this — the number of people who recognize our economic fix is beyond repair. It’s refreshing, for sure.

On the subject of home solar installations, a reader writes: “Years ago, my parents saw the writing on the wall in California, and as electricity rates began to skyrocket, they had the foresight to install solar.

“What they did not anticipate was, even though a large percentage of electricity produced from their panels went back to the grid, they were still being charged for their electricity. Not only that, but the yearly rates continue to climb, so they are now 80 and skimping on electricity used during peak times to reduce the $1,000 or so (per year) estimate PG&E said they’d pay.

“They turn off the hot water heater during the day (I think from 9 a.m.–6 p.m.) and don’t do laundry or run the dishwasher during peak hours. Heck, they’ll run the AC in the a.m. and p.m. but roast at midday because, as typical seniors, they are on a fixed income and cannot afford a $1,000 yearly electric bill.

“So I don’t trust the Dems’ governmental monopoly in California. Mandatory solar? Great in theory, but you’ll still likely pay through the nose for energy that you’re not even using.”

The 5: Yikes. Our 5 Mins. don’t allow for an exploration of grid-tied versus off-grid solar today, but thanks for the word to the wise…

P.S. As we go to virtual press, it appears a deal is in the works: The aforementioned ZTE will get relief from U.S. sanctions, and in exchange Beijing will lift tariffs on billions of dollars of U.S. farm goods. That’s according to The Wall Street Journal, which cautions that talks are ongoing and could still fall apart. We shall see…