Use Your Home to “Grid Skim” 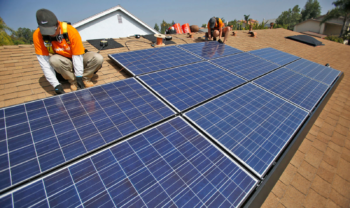 New regulations apply to all houses, condos and apartment buildings up to three stories that procure building permits after Jan. 1, 2020.

California’s decision this week is just the tipping point. “[Solar] expansion is due… in the most promising markets in the U.S. like… Arizona, Nevada and the Eastern Seaboard states — where, already, the costs of installing home-solar pays for itself through energy savings in only seven–eight years,” according to an article at Quartz.

If you’ve ever considered solar panels for your home, we offer convincing reasons to act — for the best savings — in 2018.

“You can personally ‘grid skim’ in your own home to get rid of one of your pesky monthly bills AND get an additional return of up to 8%,” says Nilus Mattive. “The cash is ready to start flowing…”

Nilus Mattive knows a little something about “cash flow.”

He’s the editor at The Rich Life project here at Agora Financial and he’s an authority on income investments and retirement strategies.

Before his time at Agora Financial, he formed his own multimillion-dollar firm to produce and publish independent research; that’s where he built an enviable 10-year track record of winning ideas.

At age 39, Nilus retired — he really knows his stuff — and moved his family to California, where he spends his days surfing the coast… and doing whatever he wants.

“The key to the grid-skimming opportunity is hidden in this statistic about the electrical grid,” says Nilus.

The latest numbers from the U.S. Energy Information Administration for 2016 follow… 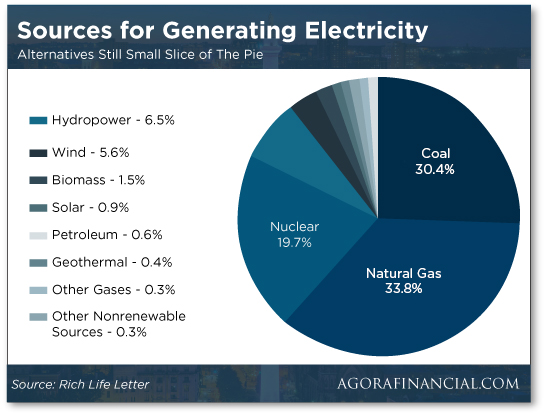 “Solar by itself accounted for roughly 1%, or 40 billion kilowatt hours (kWh), of 2016’s utility-scale electricity generation,” Nilus points out.

“Add it up, factor in some more gains in 2017, and less than 2% of the electricity in the United States comes from the sun.”

Doesn’t sound like much? “You have to remember we’re talking about huge numbers in terms of dollar value,” he says. “Even a couple percent of this pie is extremely valuable.”

“Under this federal program, consumers and businesses can get tax credits worth 30% of the cost of installed solar systems through 2019.

“Now is a great time to go solar,” says Nilus. “The federal government will give you a tax credit worth 30% of the total price of the system.

“Note this is a CREDIT not a DEDUCTION: It will reduce your total tax liability dollar for dollar.”

Here’s one way of looking at the ITC: “The end result is a very nice discount on the price of your solar power system,” Nilus says.

Does solar make sense for you? Nilus has a few common-sense suggestions…

He says, “Consider your home’s location, your overall energy usage and your current utility rates.

“Another important variable in the calculation is how long your system will produce electricity without serious maintenance or replacement.

“Current solar panels have a 25-plus-year life span,” Nilus says. “So once they’re installed and have generated enough watts at your utility rates to make up the cost of installation, you’re receiving ‘free electricity’ for the remainder of their useful life.”

Finally, don’t forget about utility rates… the Energy Information Administration shows the cost of electricity rising 440% from 1960–2010. “That’s an average annual increase of 8%.”

Putting it all together: a real-life example…

“Assuming an electric utility bill of $100 a month, and NO annual increases going forward,” humor us on this one — we like dealing with round numbers — “you’d end up paying your utility company $24,000 over the next 20 years.

“To create that same amount of electricity with a solar power system might cost $10,000 (maybe even less after credits).

“If you include the breakeven years,” Nilus continues, “the overall average annual return is still north of 8%.

“Remember, that’s a virtually guaranteed return… and an understated one at that since we are not factoring in rising electricity costs.

“Armed with that knowledge you now know how to personally ‘grid-skim,’” Nilus says.

“As you can see, even if we put aside any possible environmental or societal benefits, solar power can make serious financial sense… especially while the largest ITC remains in full force.”

[Ed note: Nilus is offering The Rich Life Income Bible — a book jammed with tips, tricks and hacks to squeeze the value out of every one of your dollars. Take a look…

This book of practical and actionable advice is free, as long as you can spot us $4.95 for shipping and handling. Check it out right here.]

Stocks are set to end the week up strong — with energy shares leading the way.

At last check the Dow has pushed past 24,800. If that holds by day’s end, we’re looking at a 550-point gain for the week. Crude is hanging onto most of the week’s gains, a barrel of West Texas Intermediate now $71.21.

“Today, there are more than 10.6 million barrels of oil pulled out of the ground in the United States every day,” our Zach Scheidt tells us. “That’s much more than any other period in modern history, including the 1980s, when Big Oil was at its peak.”

And more oil’s on the way… if the rig count in North America signifies anything.

As of May 11, there were 160 more operational oil-drilling rigs than the same time last year — according to stats from Baker Hughes — bringing the number to 1,045 working rigs in North America.

“Keep in mind today’s oil rigs are much more efficient at drilling wells than at any time in the past,” says Zach. “So it takes fewer days for an oil rig to complete a new well.

“And shale oil fields are now producing more oil for every well, thanks to advances in the ‘fracking’ technique.”

Zach says: “Add it all up and you’ve got a situation where oil producers are getting more oil out of the ground… and they’re selling this oil at higher and higher prices.”

“Venezuela’s currency devaluation is so out of control the stock market is about to bust,” says an article at Bloomberg.

“Regulators say they have to lop three zeros off the price of equities on the exchange after determining its computers could no longer handle the swelling values for local shares as the bolivar has tumbled more than 99% versus the dollar in the past few years,” the article continues.

Changes went into effect May 2. 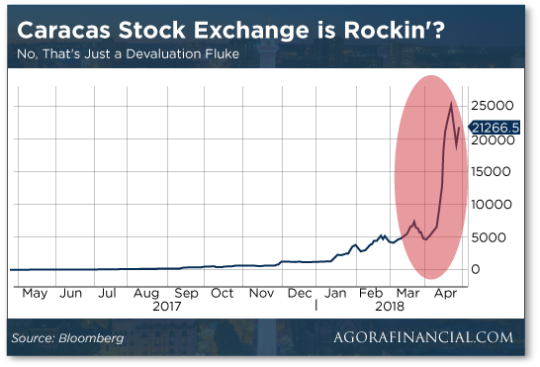 “The government had already announced plans to redenominate the bolivar by a factor of 1,000 in June,” says Bloomberg, “but stock exchange officials had to act sooner to avoid coming up against technical limitations.”

“But it has nothing to do with confidence in the country’s companies.”

Instead, Venezuelan investors are turning to equities in a last-ditch effort to preserve life savings from quadruple-digit inflation.

“Rising stock markets won’t save you if the currency goes down the tubes,” Jim Rickards warns.

Venezuela’s predicament is a cautionary tale… but not one we haven’t heard before.

Jim takes a look at Germany, post World War I — after the Treaty of Versailles imposed stiff war reparations. By 1922, “the amount of paper German marks needed to buy 1 gold mark skyrocketed from 100 marks to 1 trillion marks.

“Ever since, people have asked how this could happen.” How could events spin so out of control, decimating individuals’ savings and a country’s economy?

“One of the answers is that in the early stages of the hyperinflation, the stock market did quite well,” Jim says. “German stocks rose strongly in 1920 and 1921 just before the hyperinflation kicked into high gear.”

While German citizens had an inkling currency didn’t buy as much as it used to, they were pacified by “healthy” stock portfolios.

“The problem with this view is that the stocks themselves were denominated in the soon-to-be-worthless paper marks,” Jim says. “So rising stock prices were not rising in real terms once you adjusted for the devaluation of the currency.”

“There’s a lesson here for all investors around the world,” Jim says. “If inflation gets a grip in a country… don’t rely on your stock gains to bail you out.”

“Another boomer here. I don’t feel that ‘millennials versus boomers’ is the millennials’ fault. They didn’t build the world they’re (eventually) going to inherit.”

Yes, our mailbag is still filled to overflowing with people weighing in on generational conflict – or, in this case, rising above it.

“Don’t really feel it’s the boomers’ fault, either. History can be hard to discern when you’re in the middle of it. Nixon removing the hard peg between the U.S. dollar and gold may be a major factor in where we are today, but at the time I was far more concerned with the price of gas and the spread of Dutch elm disease as part of a crew taking down the (American elm) trees that had died because of it.

“I think my preferred description of the situation is that most, probably a majority, of the boomers have been herded into one cattle pen while close to all of the millennials are corralled two or three pens behind them. But all are slowly heading to the same economic slaughterhouse. Therefore ‘millennials versus boomers’ sounds to me like a version of ‘Let’s You and Him Fight’ (Eric Berne: Games People Play) and a diversion from the underlying problems.

“If it comes to intergenerational warfare, of course, it will also add another front to what Jim Rickards calls the ‘war on savers,’ since obviously any of us geezers that have managed to obtain and maintain any wealth will be the targets. This will be made worse by two factors: Old folks with money will have access to technologies allowing them to live far longer than previous generations of old people with money, and traditional methods for younger persons to generate incomes have slowly been withdrawn, hence the ‘gig’ economy.

“Alternatives? Not many that I can see. Perhaps the best quick fix would be to reduce the debt load on the younger people (that money’s gone, folks, kiss it goodbye and move on) and give them a better chance to stand on their own.”

Then again, the default rate is already 20% a year…

P.S. We return tomorrow with a special edition of the Saturday 5 with Dave at the helm. He takes on the future of the U.S. dollar as the global reserve currency… and more from our jam-packed mailbag (hint: generation wars). Don’t miss it!