Boomers vs. Millennials: The 5 Provokes an Intergenerational Food Fight

If you’re a baby boomer with millennial-age kids who are struggling to get by… they’re probably harboring some resentment against you. Or at least your generation.

The political news website Axios recently commissioned a survey asking this question: “Have the baby boomers made things better or worse for your generation?”

A broad question, to be sure, but personal financial considerations surely loom large in the answers. Here’s the breakdown, generation by generation… 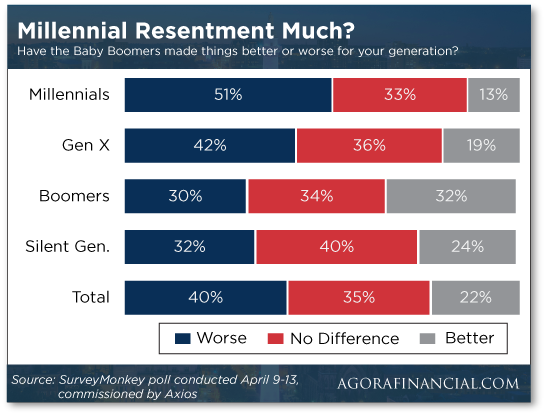 Axios’ takeaway: “Beset by big college loans, inheriting two wars and facing an uncertain future of work, a majority of millennials say baby boomers have made things worse for them — and a lot of boomers agree.

“If it persists, the generational divide could turn into political rivalry,” Axios writer Steve LeVine continues, “as the generations compete for limited tax dollars — millennials seeking government help as automation takes hold, and boomers insisting on promised levels of Social Security and Medicare.”

But if a substantial number of boomers feel their own generation is to blame, how might they want to make amends? And how might that affect “promised levels of Social Security and Medicare”?

We experienced an outbreak of generational warfare in The 5’s mailbag during the autumn of 2015. At the risk of re-igniting the conflict today, we reprise the comments of one reader…

“When the talk of ‘death panels’ in Obamacare took hold, and Democrats showed Republicans pushing Granny over a cliff, I predicted, ‘Yes, that’s right. When we’re 80-plus, millennials will be ‘dispatching’ us costly geezers at breakneck (no pun intended) speed.

“They’ll create a fancy, Orwellian, touchy-feely name for this genocide, but it will come. The strong always have the final say.”

The reader’s remarks are less outlandish than you might think — especially if you’re familiar with the work of the researchers who conceived the term “millennial.”

Neil Howe and the late William Strauss constructed a constellation of generations in which the millennials will end up playing a similar role in the present era as that of the “Greatest Generation” who came of age during the Depression and World War II. Perhaps you have trouble imagining the proverbial “snowflakes” storming Omaha Beach, but to Strauss and Howe, it’s the young adults who will rise to the occasion as a new era of crisis looms…

Key point: Just as the GI Generation was then rewarded with generous housing benefits, subsidized college tuition and so on, Strauss and Howe theorize government would shower the same sort of benefits on millennials.

Meanwhile, “Old boomers will construct a new social ethic of decline and death, much like they did in youth with sex and procreation,” the authors wrote in their 1997 book The Fourth Turning. “Where their youthful ethos hinged on self-indulgence, their elder ethos will hinge on self-denial. As they experience their own bodies coping naturally with decline and death, they will expect government to do the same.”

If such a scenario sounds too far-fetched, we call your attention to one of the major headlines today on the other side of the Atlantic… 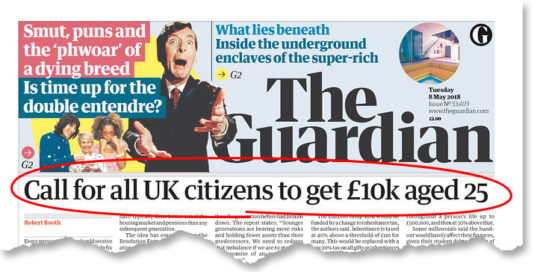 An outfit called the Resolution Foundation is generating enormous buzz in Great Britain with a proposal that the government grant everyone 10,000 pounds — about $13,500 — upon reaching age 25.

“We’ve got a very serious problem of ensuring there’s a fair deal across the generations,” says Lord David Willetts, the foundation president.

The solution? A “citizen’s inheritance,” they’re calling it.

“The CI should have four permitted uses,” says the foundation’s report: “funding education and training (including paying off tuition fee debt); deposits for rental or home purchase; investment in pensions; and startup costs for new businesses that are also being supported through recognized entrepreneurship schemes.”

Where would the money for these payouts come from, you ask? From a radical restructuring of Britain’s inheritance tax.

In the United States, the “death tax” affects relatively few people. Under the new federal tax law, the estate tax exemption has swelled to $11 million — double that for couples — although some state governments claim a take at much lower thresholds.

But the “citizen’s inheritance” isn’t the only way the foundation’s report suggests bridging the so-called generational divide.

It also suggests a “levy” of $3.1 billion to shore up funding for the National Health Service, Britain’s socialized-medicine program. It would be paid for by — wait for it — higher health insurance premiums paid by the over-65 set.

But what say you? Are boomers responsible for the mess the millennials are in? Or did millennials foul up on their own? Tell us what you think, and we’ll share your thoughts the rest of this week. Your Gen-X editors will officiate any resulting food fights fair and square — heh.

To the markets, where the big story is oil gyrating with every new rumor about Donald Trump and the Iran nuclear deal.

A barrel of West Texas Intermediate plunged from over $70 to about $68 and has since recovered to $69. By the time you read this, the president will have announced his intentions — we’ll tease out any implications tomorrow.

Not much to say about the major U.S. stock indexes — blue chips are down a bit, small caps up a bit. Gold is little moved at $1,310.

Put all those figures together and Americans’ nonmortgage debt grew 3.6% for the month, which is actually way less than most economists were expecting. It’s too soon to say consumers are feeling tapped out… but those credit card numbers bear watching.

The monthly Optimism Index from the National Federation of Independent Business inched up to 104.8 for April — continuing the run of 100-plus readings going back to Election Day 2016.

Profit levels reported by business owners are the highest in the 45-year history of the survey. “The optimism small businesses owners have about the economy is turning into new job creation, increased wages and benefits and investment,” enthuses NFIB president Juanita Duggan. The number of businesses reporting poor sales as their biggest problem is now near record lows. Topping the “single-most important problem” list again is quality of labor. Good help is hard to find.

Bitcoin is slowly attaining the respectability our James Altucher was telling us it would.

“The parent company of the New York Stock Exchange has been working on an online trading platform that would allow large investors to buy and hold bitcoin,” reports this morning’s New York Times.

The news comes on the heels of Goldman Sachs announcing plans to open a bitcoin trading unit. Put together, the two developments “mark a dramatic shift toward the mainstream for a digital token that has been known primarily for its underworld associations and status as a high-risk, speculative investment,” says the Gray Lady.

The shift could accelerate later this week. Regulators from the Securities and Exchange Commission and the Commodity Futures Trading Commission are meeting this week to discuss the ground rules for trading cryptocurrencies.

“I expect other banks and clients will follow Goldman’s lead, resulting in higher prices for top cryptocurrencies.”

Besides, you know crypto is a big deal when a food giant like Kraft Heinz gloms onto the trend — and manages to get a cease-and-desist letter.

“Bacoin is not a cryptocurrency,” explains Josiah Wilmoth at the crypto website CCN. “Rather, it’s a cleverly branded promotion that uses an instant win game — excuse me, ‘mining’ — to give away bacon coupons whose values float based on user engagement. However, based on BACN’s price movements, ‘float’ is probably a generous term.”

Indeed, Bacoin’s “value” soared to 14 slices of Oscar Mayer bacon this morning, before crashing 93% to just one slice. At last check, it’s recovered to five.

“Since Bacoin is not actually a cryptocurrency, it does not trade on an exchange,” Wilmoth writes. “Rather, its value is linked to the dubious metric of social media engagement.”

We’ll spare you the eye-gouging details of how it’s calculated. Because we still have to address the cease-and-desist part of the story.

It turns out a crypto enthusiast in Michigan named Kirk Steele developed a real crypto called Bacoin back in 2014, intended in part as a marketing tool for local meatpackers.

When he first heard about the Oscar Mayer campaign, he got excited. Then he realized it had no blockchain backing and was only a stunt. “It’s just taking the buzzwords as a tool for corporate promotion and not actually contributing anywhere in the crypto scene,” Steele tells Motherboard. (Shades of Ralphie in A Christmas Story decoding Little Orphan Annie: “A crummy commercial? Son of a b****!”)

Thus the cease-and-desist letter Steele sent. “I’ve been in touch with some local copyright lawyers to see if I have a case,” he says — although he concedes he has little money for attorneys and might be willing to settle for, say, a year’s supply of bacon.

“I used to live outside of Allentown, Pennsylvania,” a reader writes about that city’s heavy-handed insistence on fingerprinting everyone who wants to unload goods at a secondhand store.

“The area between Allentown and Reading is, historically speaking, a hotbed of hate group cloisters and training camps. But that is neither here nor there. It is generally a nice area and they are trying to rise up from the ashes of a dead steel industry.

“My question for these control freaks in city government is, ‘What’s next?’

“Are you going to require eBay and Amazon and Craigslist to track and then sequester their goods, take pictures and fingerprints for anything sold in your city too? Because that is what thieves will do (most — if not all — of them probably already do). Ha!

“The end result will be noncompliance and then small businesses shutting down. Besides, like check-cashing companies, these businesses serve a client base that needs their services: the economically disadvantaged.

The 5: In other words, government…

P.S. James Altucher just made a major decision — one that will cost him $1 million.

But the payoff — for you — could be enormous.