China’s “Nuclear Option” Is a Dud

Uncle Sam just went deeper into hock… at the fastest pace in nearly 10 years, in fact. But Treasury Secretary Steve Mnuchin professes not to be concerned.

The U.S. Treasury issued its quarterly statement yesterday, in much the same way companies are reporting earnings right now. Net borrowing totaled $488 billion. That’s a record for the first quarter of any year… and is exceeded only by the borrowing binge that accompanied the Panic of 2008… 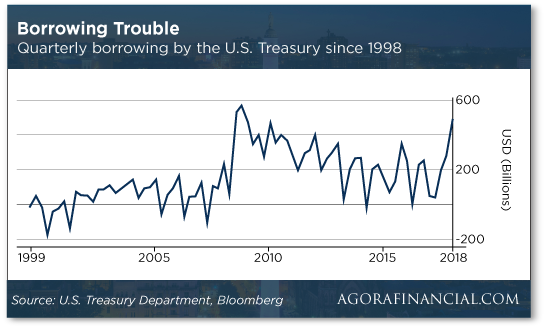 But Mnuchin is doing his best Alfred E. Neuman take: “It’s a very large, robust market — it’s the most liquid market in the world,” he told Bloomberg TV. “I think that there are still a lot of buyers for U.S. Treasuries.”

The problem is that the three of the biggest buyers are all dialing back their purchases.

During his whistling-past-the-graveyard interview, Mnuchin said, “By definition supply and demand will equate.”

Well, yes, but at what price? If there’s a growing supply of U.S. Treasury debt and fewer buyers stepping up, that means the price has to fall to make it worth a buyer’s trouble.

And falling bond prices equate to rising interest rates. The rate on a 10-year Treasury note recently crossed the 3% threshold for the first time since 2013. Not coincidentally, the rate on a 30-year mortgage is also the highest since 2013.

And to hear some people tell it, China could make that situation a whole lot worse — and fast.

China is the biggest foreign holder of U.S. Treasuries. And as noted above, the Chinese have been sellers of late. But they still have $1.18 trillion in Treasuries on their books. That’s about 5.6% of America’s $21 trillion national debt. Not chump change.

Poke around on the interwebz for a few minutes and you’ll find no shortage of pundits who think those Treasury holdings are a huge weapon with which Beijing can threaten Washington if a trade war escalates. Some even call it the “nuclear option.”

“For China to keep fighting, they need an asymmetric response; they need to fight the trade war with something other than tariffs.” Thus you hear the nuclear-option talk.

But as it happens, “The nuclear option is a dud,” Jim says.

“If China did sell some of their Treasuries, they would hurt themselves because any increase in interest rates would reduce the market value of what they have left.”

In addition, Jim says the Treasury Department could strong-arm U.S. banks into buying any Treasuries the Chinese didn’t want to buy. And the Fed could easily reverse its quantitative-tightening policy in a pinch, also soaking up excess supply.

“If China pursued an extreme version of this Treasury dumping,” Jim goes on, “the U.S. president could stop it with a single phone call to the Treasury. That’s because the U.S. controls the digital ledger that records ownership of all Treasury securities. We could simply freeze the Chinese bond accounts in place and that would be the end of that.

“So don’t worry when you hear about China dumping U.S. Treasuries. China is stuck with them. There is no nuclear option in the Treasury market.”

[Ed. note: Jim’s unique “Project Prophesy” system just indicated it’s go-time for a play in the energy sector that could deliver 200% gains by this September.

The recommendation went out to readers this morning, so there’s still time to act. Jim explains how the system works when you follow this link.]

May is off to a slow start for the stock market.

At last check the Nasdaq is holding up best among the major U.S. indexes, off only slightly. But the Dow is down 1% — about 250 points — pulled down by Boeing.

Sometimes a stock sell-off is accompanied by a rally in gold — but not today. Dollar strength is once again knocking the stuffing out of gold; the bid is down to $1,304, more or less where the Midas metal began the year. Crude is also slumping, down more than 1% and back below $67.

It being the first of the month, the big economic number of the day is the ISM Manufacturing Survey. At 57.3, the figure clocked in lower than the lowest guess among dozens of economists polled by Bloomberg. America’s factory sector is still humming — any number above 50 indicates growth — but there’s a definite slowdown.

Within the survey we see the “prices paid” component is now its highest in nearly seven years. That’s more evidence manufacturers are being squeezed by rising costs of raw materials. Some of that is the Trump administration’s new steel and aluminum tariffs.

Whether those tariffs will be extended to the European Union, Canada and Mexico won’t be known for another 30 days. The White House is extending a grace period while negotiations continue.

As long as we have rising interest rates on the brain today, we should address the following chart… 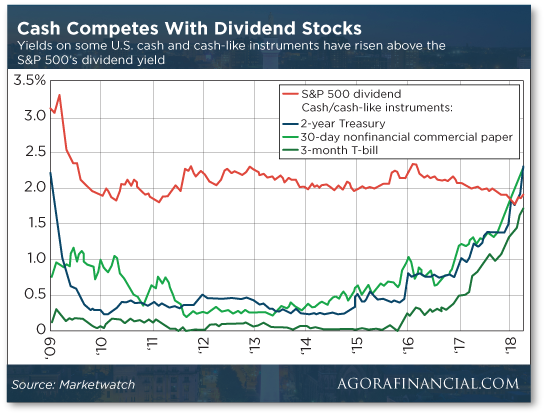 We turn to our income authority Zach Scheidt for an explanation. “The red line is the dividend yield that you can get from the S&P 500 right now. So if you invest $10,000 in the broad market right now, you can expect to get just under 2% in annual dividend payments.”

The other lines are the interest rates on various cash-like instruments, including 30-day Treasury bills and 2-year Treasury notes. “These represent the yield that you could get on a savings account or CD at your bank.

“The key point to understand is that interest rates are now getting close to (and crossing over, in some instances) the dividend yield you can get in the market.”

“Here are the two biggest reasons savers are still much better off with income from dividend stocks,” says Zach, “instead of accepting the paltry interest rates that bonds or savings accounts are offering.”

First, you have the benefit of capital gains — a rising stock price. Sure, prices can go down. But we’re still in the boom phase of the boom-bust cycle. “There are plenty of great dividend companies you can invest in that are hiring new workers, adding new customers and, most importantly, growing profits.”

Second, take another look at that red line representing the S&P 500. That’s every S&P 500 stock — many of which don’t pay a dividend, including behemoths like Alphabet (Google), Amazon and Facebook.

“If you want to compare apples to apples,” says Zach, “you need to look at dividend stocks specifically and compare those stocks with the interest rates that savers can lock in.”

Oh, and don’t forget that quality dividend payers grow their dividends each year. It’s like getting a pay raise without doing any work. You don’t get that investing in fixed income. (That’s why they call it “fixed.”)

“As an income investor, your best bet is still to stick with dividend stocks,” Zach concludes. “Just make sure you’re investing in companies that have great businesses and a history of increasing their payments to investors.”

Now the truth comes out about the 21st century’s worst episode of hyperinflation. (So far.)

Back in 2008–09, the central bank of Zimbabwe was printing currency notes with 14 zeroes on them… and even those could buy only four loaves of bread. 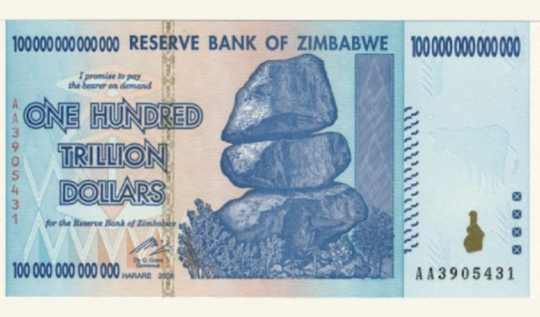 Now the man behind it — former Reserve Bank of Zimbabwe governor Gideon Gono — says he had no choice. Without hyperinflation, hungry soldiers would have staged a military coup.

“If we had not done what we did printing money and allowing inflation to skyrocket,” he told a conference last month, “then the men and women you see in those beautiful uniforms, they were ready to get out of their barracks.

“I had the privilege to visit each and every barrack in this country to come face to face with hunger, hunger that was affecting men and women who have nothing else but their AKs, men and women who, if we did not do what we did, could have been tempted to get out and look for some food by whatever means.”

Well, it worked. At least for a while. A new round of extreme inflation threatened last fall, and the military finally removed the aging dictator Robert Mugabe after 37 years. But Gono had retired by that time. Heh…

“Why not simply ask your clients their preferred method of delivery?” a reader inquires about our Facebook Messenger experiment.

“Continue email distribution for all the old fogeys like me and let the hipsters do their thing on Facebook.

“But please… a plea. I get it that your customer service staff are themselves millennials, but it would be a BIG mistake to be forcing a wholesale change to Zuckerberg’s platform… I did not, do not and will never trust that liar or his people, and I am not the only one telling you this.”

The 5: Fear not. It would be bad business, and not only because we’d be alienating Facebook-averse customers.

That one shift proved fatal for an outfit called LittleThings that published feel-good stories targeting women. Its traffic collapsed 75%. It shut down at the end of February.

Imagine having a business model almost entirely dependent on the policies of a single outside distributor with which you had zero leverage to negotiate. Dumb, dumb, dumb.

Meanwhile, as long as you brought up the generational angle… the pollsters at Gallup have conducted their first comprehensive survey of Facebook use since 2011… and it turns out the “old fogeys” are adopting Facebook at the fastest pace.

“The greatest increase in Facebook use from 2011–18 has been among adults aged 50–64,” the researchers write. “This group’s rate of use has grown from about a third in 2011 to more than half today. Retirement-age adults have nearly doubled their rate of use.” Indeed, one-third of Americans 65 and over say they have a Facebook presence now.

Meanwhile, just under three-quarters of the 18–29 set uses Facebook. That’s still the highest percentage, but it’s more or less unchanged from 2011.

P.S. Unless you clicked on this link yesterday, you’ve never seen anything like it before.

In the space of three minutes, a former hedge fund manager demonstrates — with only four mouse clicks — how to instantly “lock in” $52,000 of legally guaranteed income checks from some of America’s top companies.

This little-known “loophole” allows you to tap into something overlooked — without having to touch stocks, options or any conventional Wall Street asset. Click here now to see how.