Trump Gives OPEC Too Much Credit

Uhhh… Is the president getting itchy about the midterm elections? 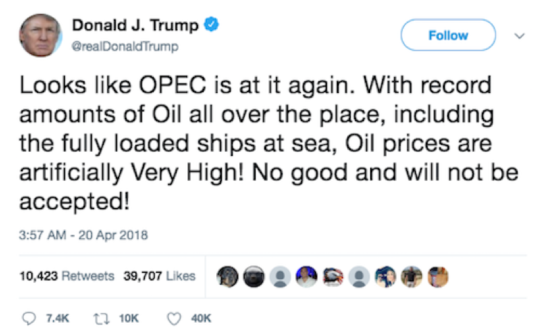 “It was not immediately clear what sparked Trump’s OPEC tweet,” says a CNBC article, “but Reuters reported earlier this week that Saudi Arabia would like oil prices to rise above $80 a barrel in order to support the stock market debut of the kingdom’s oil giant Saudi Aramco.”

Just spitballing here, but we suspect the real motivation can be found on AAA’s website this morning… 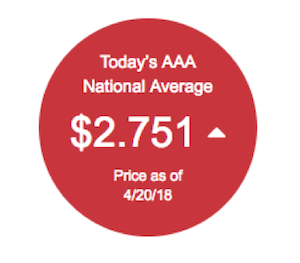 That’s the highest so far during Donald Trump’s presidency. And as we’ve been saying for a few weeks, $2.75 gasoline is the pain point at which 20% of drivers surveyed by AAA say they’ll “change their driving habits or lifestyle.” For 40%, it’s $3 gas.

Presidential pollsters think about gas prices a lot. Rising gas prices have to be giving heartburn to at least a few denizens of the West Wing. They’re already concerned that turnout among Trump’s base will be muted this November, possibly shifting control of one or both houses of Congress to the Democrats.

In any event, the president attributes more power to OPEC than it really has…

For the last 35 years, OPEC has been a bit player when it comes to moving oil prices. The real action is in Washington, D.C.

That’s the thesis of the fascinating 2008 book The Oil Card, written by the veteran energy-industry journalist Jim Norman. Your editor had the privilege of interviewing him in 2013.

Norman presents reams of evidence that the United States government manipulates oil prices up and down, usually colluding with Saudi Arabia, to achieve certain geopolitical aims.

In the 1980s, oil prices were deliberately crashed to make Soviet oil exports dirt-cheap and bankrupt the Evil Empire. The aims shifted dramatically during the first decade and a half of this century: Oil prices were allowed to rise, to make China’s oil imports costly and act as a brake on the Middle Kingdom’s relentless growth.

Following Norman’s thesis, the crash in oil prices starting in mid-2014 looks like a return to 1980s form — sticking it to the Russkies.

Crude peaked near $110 a barrel in June of that year… tumbling below $80 during the summer and fall… crashing toward $50 when Saudi Arabia and OPEC shocked the world by deciding against production cuts… finally bottoming near $27 in early 2016. 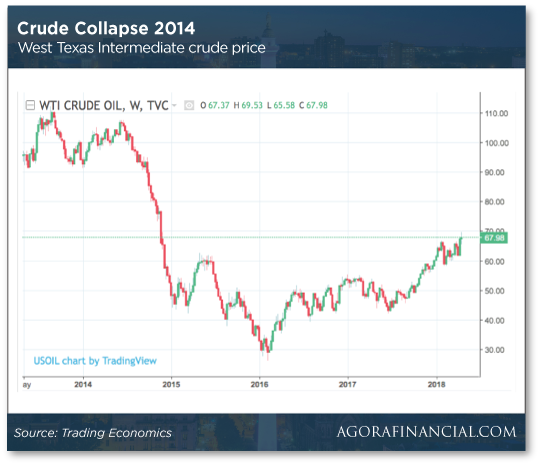 Think about this: The collapse began barely three months after Washington engineered regime change in Ukraine — which prompted Moscow to seize the Crimean peninsula and make sure Russia’s warm-water naval port at Sevastopol wouldn’t fall into NATO hands.

The annexation of Crimea brought on a host of U.S. and European sanctions that remain in place today. Those sanctions surely have put a squeeze on Russia’s economy… but nowhere near the impact of crashing oil prices.

What are Washington’s objectives now, with oil back near $70 a barrel, possibly on the way to $75? For that matter, who’s calling the shots — with Trump battling assorted factions within the “Deep State”? I wish I could speak with Mr. Norman again, but he’s in retirement these days and hard to get hold of. Still, his book continues to provide a valuable lens through which we’re viewing oil’s ups and downs here at The 5.

To the markets today, where tech stocks are dragging down all the major U.S. indexes.

Apple is down nearly 3.5% thanks to analyst warnings that iPhone sales are likely to come in below expectations when AAPL reports its numbers on May 1. The Dow has shed 200 points, but the Nasdaq is taking a bigger hit.

Tough times in the tobacco patch: Look what happened to Philip Morris Intl. after it announced earnings this week… 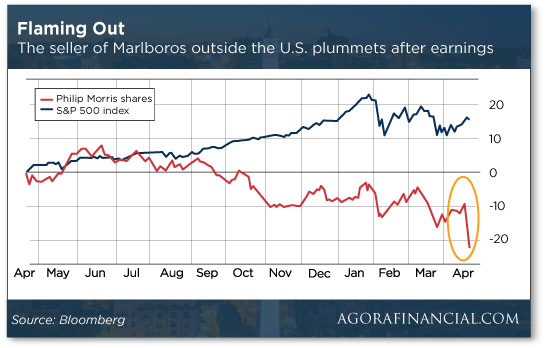 That’s a 16% drop in one day to new 52-week lows, says our chart watcher Greg Guenthner.

“People across the world are living healthier lives — and smoking less,” he says. “That’s great news for public health. But it’s not helping shares of the big tobacco companies.”

Global smoking rates are in decline. Cigarette shipments fell 5.3% in the first quarter of this year.

“Tobacco companies have successfully fended off concerns regarding their shrinking demographic by raising cigarette prices,” Greg says. “But it looks like this tactic has become less effective as the number of smokers continues to dwindle.” And as revenue-hungry states keep jacking up cigarette taxes, we hasten to add.

“There’s no reason,” Greg concludes, “to try and buy this dip anytime soon.”

The rural economy is holding strong — provided the trade wars don’t get out of control.

The Rural Mainstreet Index compiled by Creighton University professor Ernie Goss registers 53.5 for April. Any number above 50 indicates a growing rural economy. The index has topped 50 for three straight months now, after a very rough patch starting in mid-2015.

Goss surveys bank CEOs in rural sections of 10 states stretching from Illinois west to Wyoming to compile his index. The big concern he’s hearing from them right now — whether looming trade wars will hurt the market for U.S. farm exports. “An unresolved North American Free Trade Agreement (NAFTA) and rising trade tensions with China are significant concerns,” says Goss. And at a time when grain prices remain stubbornly low.

It smacks of cheap opportunism, but it’s also a milestone worth noting here on “4/20” — Senate Minority Leader Chuck Schumer has introduced a bill to decriminalize cannabis at the federal level.

More significantly, perhaps, Schumer’s bill would remove marijuana from the feds’ “Schedule I” blacklist — where it currently sits alongside ecstasy and heroin.

Schumer is using the same language other politicians use when they finally come around — saying his position has “evolved.” That’s something of an understatement, considering he’s been one of the Democrats’ most fervent drug warriors across the decades.

As we’ve said for more than a year, and as Sessions himself admits in moments of candor, the Justice Department doesn’t have the resources to arrest legions of pot smokers and distributors in places where it’s been legalized on the state level. And it sure doesn’t look as if the president is willing to expend precious political capital on a jihad against joints. So the president’s promise to Sen. Gardner is significant.

Ray elaborates: “I’ve said in the past that the federal rules surrounding cannabis are terrible for American businesses. It’s the reason why Canadian firms are dominating the industry — and it’s why we have so many Canada-based stocks in our portfolio. That’s a message that’s sure to resonate with President Trump.”

Presumably Sen. Gardner will be one of the first to lend his support to the Schumer bill, which would give it instant bipartisan support. Stay tuned…

That didn’t take long: An auditor is raising “substantial doubt” about the future of MoviePass.

Our income maven Zach Scheidt alerted us last month to MoviePass — which, long story short, gives you nearly unlimited access to the bulk of movie theaters around the country for a mere $7.95 a month. “Simple math tells you that it loses money with every customer. If all 2 million users see a pair of $9 movies in a given month, the company gets nearly $16 million in revenue but spends $36 million on tickets.”

Later in March we mentioned that MoviePass’ business model entails a mobile app that can track subscribers via GPS — serving up valuable data the company can sell to advertisers. Assuming, of course, that users aren’t creeped out by that notion at a time of backlash against Facebook and such.

Now Variety, the legendary entertainment trade publication, is reporting that an independent auditor has run the numbers and issued a report. It includes this kiss-of-death phrase — “substantial doubt about the company’s ability to continue as a going concern.”

HMNY’s shares have collapsed this week from nearly $5 on Tuesday to [checking our screens] $2.37. Ouch…

From CNBC: “Hedge fund managers with high testosterone underperform those with low testosterone by 5.8% each year, according to a study conducted by University of Central Florida and Singapore Management University.”

The researchers, using software, measured the facial width and height of more than 3,000 hedge fund managers. The CNBC article says the ratio between the two distances is “proven to be a proxy for testosterone levels.”

That immediately set off our junk-science detector, but apparently there’s something to it: In the journal Archives of Sexual Behavior, evolutionary psychologist Steven Arnocky measured this ratio in male college students and correlated it to their sex drive. Turns out a wider, shorter face corresponds to a higher libido. (A separate study by Arnocky also found a higher propensity for infidelity…)

Back to the hedge fund study: All else being equal, higher testosterone correlates with lower returns. High-T hedgies, the researchers write, “trade more frequently, have a stronger preference for lottery-like stocks and are more likely to succumb to the disposition effect” — that is, they sell their winners too quickly while holding onto losers in the hope they’ll come back.

Fascinating. Have we stumbled onto a new criterion with which our publishers can evaluate potential newsletter editors — at least the male candidates? “Hold still for a moment while we take a couple of measurements…”

“Where do you find these oafs?” a reader writes of a fellow reader, getting our Friday mailbag off to a rollicking start.

“First, I don’t think he knows the difference between AGI and taxable income. Since he says ‘after deductions’ let’s presume he means $46K taxable — so his tax on that would be $7,150, or 15.5%, if he is single, and an effective rate of 12.5% if he used the standard deduction.

“Your team really ought to do a little fact checking before printing and then commenting without correction on this kind of reader submissions. This is the second time I’ve written in about this very kind of baloney.”

In the same vein another reader writes about the Californian with pricey health insurance: “My question would be what is the source of his coverage?

“That would be a lot for an employer-sponsored plan. And if he’s buying his own, did he get it through California’s ACA exchange? About 85% of people who buy through such exchanges get premium subsidies, which can be substantial. Eligibility depends on income, but he could be really missing out if he’s just going to an insurance broker.”

The 5: We’re not really in a position to “fact check” a reader’s claim about his or her personal financial circumstances, if they’re willing to serve up that information to us. There’s enough bogus information circulating in both mainstream and alternative media to keep us plenty busy as it is…

P.S. James Altucher recently made an extraordinary pledge to his readers. Have you seen it?

It could make an enormous difference to your portfolio — as much as $3,000 a month.

Think about it for a moment. Then follow this link.