We introduced you yesterday to a rule of thumb used by Alan Knuckman, our man in the Chicago options trading pits: Wait 48 hours before reacting to anything Donald Trump says. Acting any sooner would be rash… and potentially costly.

Yesterday morning the president served notice to Russia about pending U.S. airstrikes in Syria. The Dow gave up 250 points. This morning, the president says an attack may not be imminent after all. As we write, the Dow has regained all those points. 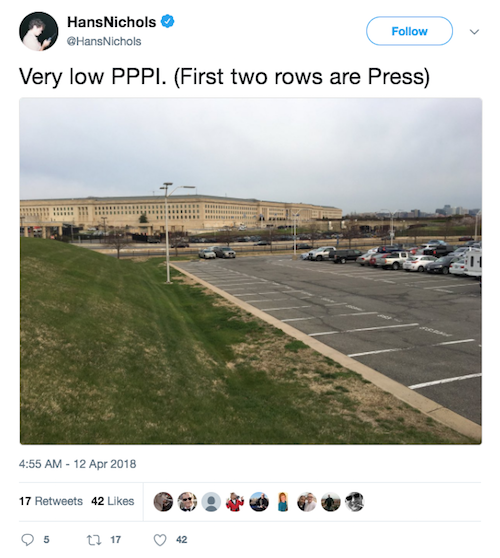 It’s entirely possible the military has talked Trump down from a Syria attack — just as the military did with Obama in 2013.

Back then, a chemical-weapons attack took place in Syria. The Deep State was keen to pin it on President Bashar al-Assad. Establishment media were braying for U.S. airstrikes.

But the military was suspicious about the quality of the intel… and leery about who would fill the power vacuum if Assad’s butt got regime-changed. Gen. Martin Dempsey, chairman of the Joint Chiefs of Staff, had a long meeting with Obama on Aug. 31.

The following day, Obama told reporters, “The chairman has indicated to me that our capacity to execute this mission is not time-sensitive: It will be effective tomorrow, next week or one month from now.”

A few days later, Russian President Vladimir Putin ratcheted down the tensions even more — brokering a deal under which Assad surrendered all of the Syrian government’s chemical weapons. They were destroyed aboard a U.S. ship in the Mediterranean, under the watch of United Nations inspectors.

Fast-forward to yesterday: Hours after Trump tweeted his threats, Defense Secretary James Mattis — a retired Marine general — struck a cautionary tone: “We’re still assessing the intelligence — ourselves and our allies. We’re still working on this.” By this morning, Trump was tweeting an attack “could be very soon or not so soon at all!”

The threat of an attack is receding just in time for the start of earnings season tomorrow: “TGIF,” says the aforementioned Alan Knuckman. “Thank goodness it’s fundamentals.”

As Alan’s been saying for the last week, it’s sales and profits that will be front and center for the next 42 days. Worries about the Mueller investigation, or a trade war or new laws clamping down on Facebook fade into the background.

Up first tomorrow will be three of the Big Four commercial banks. “Bank profits from the last quarter will be several billions of dollars strong, and remind us of just how well corporations are performing,” says Alan.

“If we get the bottom-line bump that analysts have been screaming about,” says Alan, “stocks could launch right out of the ballpark.”

That means the stellar performance of Alan’s earnings-driven trading service stands to do even better. We launched this service just over six months ago. To date, he’s closed out 27 recommendations — every one of them a winner.

But with earnings season underway tomorrow, we have no choice but to cut off access tonight. For your final shot at turning a $10,000 stake into a $2.2 million fortune… we urge you to give this a look before midnight tonight.

When we wrote you yesterday, the Midas metal was all the way up to $1,360. Then the Federal Reserve issued the minutes from its March meeting. They signaled confidence that inflation was getting closer to the Fed’s 2% target — translating to continued monetary “tightness.”

That knocked about $10 off the bid. Another $10 came off this morning with the president beating the war drums less loudly. At last check, the bid is $1,338.

On the other hand, crude is holding on to most of its big gains yesterday. A barrel of West Texas Intermediate is still holding the line on $66.

Crude topped $67 yesterday at the peak of the war worries. The fact it’s hanging tough points to factors other than geopolitics that are driving energy…

“There’s an interesting wrinkle when it comes to supply in the oil market,” says our wealth and income expert Zach Scheidt.

While you probably learned the basic principle of supply and demand in Economics 101, something strange seems to be happening in the oil sector. 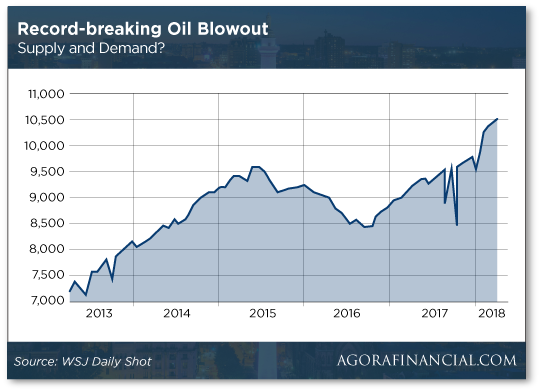 “With so much oil hitting the market, one would expect oil inventories to rise and the price of oil to drop,” Zach says.

“Instead, oil stockpiles are actually below average levels for this time of year” — and oil prices are the highest in more than three years.

“The only way that oil production can hit record highs and prices can also stay high is if the overall U.S. economy is extremely strong,” Zach goes on.

“All of which come from crude oil.”

As we’ve been saying all year, we’re in the late boom stage of the boom-bust cycle. Zach attributes economic strength to tax cuts, low unemployment and consumer confidence. And as spending picks up, the demand for crude jumps. “That’s what is allowing oil prices to remain high, despite record amounts of oil being pulled from U.S. wells,” he says.

“That’s why the recent hand-wringing about inflation, higher interest rates and trade wars and other ‘financial boogeymen’ doesn’t scare me.

“The free market is signaling a strong economy, and that should be good for investors… despite recent stock swings.”

Of course, this boom has been much weaker than previous booms… which brings us to our next item…

“Parents in the U.S. cannot get rid of their kids,” says an article at Quartz.

They don’t call it the boomerang generation for nothing…

“The share of young adults in their late 20s living with their parents is the highest it’s been in 75 years.”

According to a Pew Research study that collected data through 2016, one of three adults — ages 25 through 29 — lives at home with mom and dad (or grandparents). “This is almost three times as many as in 1970,” Quartz points out.

The number of adults who fail to launch has risen sharply for several decades “and accelerated after the 2008 financial crisis.”

The trend, oddly enough, is unaffected by “education levels, race, gender and region.”

“Pew’s researchers think late 20-somethings are boomeranging back home because, in contrast to previous generations at this stage of their lives, they are less likely to have a well-paying job and less likely to be married,” says Quartz.

Hmm… being underemployed with no spouse makes it that much harder to start adulting. 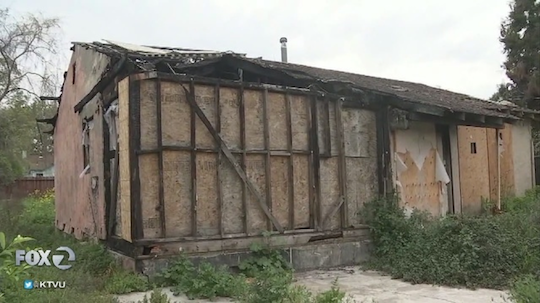 Realtor Holly Barr posted the home on a Facebook page called (unironically) Willow Glen Charm where she heard from more than one frustrated homebuyer.

To detractors, Ms. Barr said: “If you are in the market you know… that this is what it’s worth and the buyers set the price.” So there.

Of the charred husk, the realtor went on to say, “They did leave it standing so you can remodel it versus tearing it down so you save a lot of money when you can leave a wall up and do a remodel versus a complete teardown.”

Surely, she jests… Just look at it!

Fox KTVU reports: “The realtor said in less than 24 hours since posting it on Facebook, 10 potential buyers have contacted her.

“She anticipates it will sell in a few days.”

As long as we’re at it, here’s a long-overdue update on another preposterous Bay Area real estate listing. 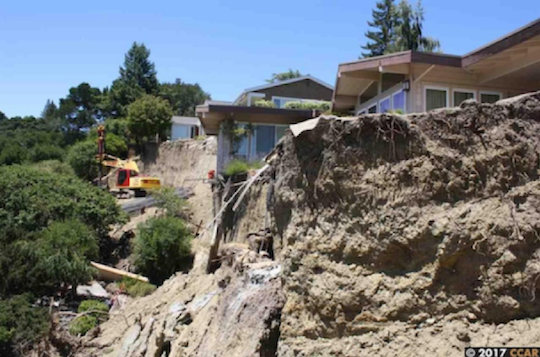 “I believe that much of the food inflation is hidden in smaller packages,” a reader writes after we passed along the latest inflation numbers yesterday.

“The most egregious is the big dimple in the bottom of mayonnaise jars that drops the ‘quart’ down to 30 ounces.

“Yogurt cups down from 8 to 6 ounces. Tuna cans down from 8 to 5.5 ounces. Sixteen-ounce cans of things like chili down to 12. The ‘half gallon’ container is now 48 ounces. Potato chips and snack foods with bags of the same size but less weight.

“And there is the double-whammy of the paper industry with towels and TP being reduced in width of the sheets AND with an increase in the diameters of the tubes.

“Even the flour sacks aren’t 5 pounds anymore. Same for sugar.

“Most ag fruits and vegetables are the same size, but there are some exceptions. Handball-sized avocados are now usually a dollar.

“Have you priced seafood recently? And on and on.”

“Once I purchase a product, remove me from the sales lists for that product!” a reader implores.

“I canceled my subscriptions at one company, not related to you, simply because they kept sending email messages about new information, targeted at new customers, which they didn’t bother to share with me, their paying customer.

“I often see an email from you for something related to a product where I have a subscription. I go searching for that information without any luck. I then go back to the email, sit through the entire sales pitch, only to find out you ARE advertising that product… leaving me frustrated because I couldn’t find the report you are talking about.

“Show me, on any one of my active subscriptions for cryptocurrency information or related to James Altucher, where that list of crashing cryptos exists.”

The 5: Yeah, I raised that particular instance with the team at our Baltimore headquarters. It appears a buncha wires got crossed. I’ll spare you the details; we just plain dropped the ball. Our bad. (The list is now out of date.)

If I understand the rest of your inquiry correctly… We have systems designed so that once you subscribe to a service, you won’t get pitched again to buy it — obviously, that makes no sense. But the systems might experience glitches from time to time. We continue to refine those systems, knowing that it does us no good to annoy our customers!

P.S. “When earnings finally come out starting tomorrow,” says Alan Knuckman, “the media will regain their focus on a strengthening American economy, record corporate profits and effects of a historic tax cut on consumer paychecks.

“And then we can tune out the nonsense coming out of Washington.”

Can we get a “Hallelujah”?

Only hours remain in which you can jump on board and take advantage of Alan’s earnings-season trades. Every one of them that’s closed out since he started recommending these trades six months ago has been a winner.

Now with the corporate tax cut as a huge earnings tail wind, earnings stand to be even better — affording you a shot at 42 days of trades that could literally make your retirement.

It all starts tomorrow. Click here and learn how you can seize the moment