So much for a calm end to the week on Wall Street.

After the market close yesterday — the Dow added 241 points — the president announced he was doubling down on his trade war. Tripling down, actually — the original suggestion of tariffs on $50 billion of Chinese goods is now up to $150 billion.

Dow futures instantly plunged 400 points… although some of those losses were recovered overnight.

The next shoe to drop came an hour before today’s open — with the March jobs report.

It was a mixed bag. On the one hand, the wonks at the Bureau of Labor Statistics conjured only 103,000 new jobs for the month — not even enough to keep up with population growth. On the other hand, wage growth accelerated a bit — now growing 2.7% year over year.

For Wall Street this is a worst-of-both-worlds outcome — a slowdown in new jobs pointing to a slowdown in the economy at the same time that higher wages might rekindle the fires of inflation. If the “stagflation” of the 1970s comes back, can disco be far behind?

The unemployment rate? That’s sort of an afterthought these days — it rang in at 4.1% for the sixth straight month. The “real world” unemployment rate from Shadow Government Statistics edged down to 21.7%.

And so the Dow is down 300 points as we write. Should the day end that way, the Dow will wind up the week right where it began, albeit with much up-and-down volatility.

For Alan Knuckman, our man in the Chicago options trading pits, earnings season will be a welcome respite from all the noise generated in recent weeks by politicians and central bankers. As he said here yesterday, “Earnings growth drives stock prices, pure and simple — and they look to be extraordinary this quarter” — especially with the corporate tax cut kicking in.

Earnings season gets underway a week from today… and Alan wants you to be ready. His earnings-driven options trading service is 26 for 26 in closed trades since launch six months ago. “I tripled my money following Alan Knuckman’s recommendation,” wrote one satisfied reader a few weeks ago. “I bought today’s trade for $3.05 and sold 1st day for $10.00. I am thrilled.”

Alan recently paid a call on Agora Financial’s Maryland headquarters, where he recorded a special interview laying out the opportunity that begins next week. We urge you to watch it right away… so you can hit the ground running.

“File this little tidbit under why corrections are good for the market,” says our chart hound Greg Guenthner.

Greg spotted a report from the Recode website this week pointing out the FAANG stocks — Facebook, Apple, Amazon, Netflix and Google parent Alphabet — now make up 11% of the S&P 500.

That’s nearly double the percentage of five years ago, when Facebook became a part of the index… 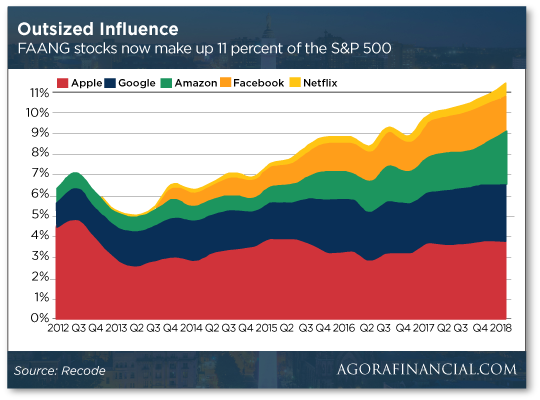 But for Greg, the historical parallels aren’t as important as this fact: “As traders and investors, we prefer swimming in a ‘market of stocks’ environment. The privilege of selecting from leading and lagging stocks and sectors is what gives us an edge over simply parking our money in an index ETF.”

That’s still a darn sight better than a year ago. Emily Clancy, who’s working on your Saturday 5 Things You Need to Know as I write, points out the Midas metal was hugging $1,250 in early April 2017.

Bitcoin has taken another trip below $7,000. Could the crypto slump be a tax-season thing?

Bloomberg cites the following figures from Fundstrat Global Advisors: U.S. taxpayers racked up $92 billion in taxable gains from cryptocurrencies last year… on which they will owe $25 billion in capital gains tax.

If those folks don’t have ready cash to pay a hefty tax bill, well, all they can do is sell part of their positions.

Hopefully, most of them aren’t in the predicament of that poor sap on Reddit last month who said he bought eight bitcoins in January 2017 for $7,200, sold at the top in December for $120,000 and proceeded to spend most of his windfall or invest in other cryptos. Only later did he realize he owes $50,000 in taxes (slightly more than his annual salary) but has only $5,000 in savings and $30,000 in crypto. Oops.

“Late last week,” explains James Altucher, “market commentators were holding their breath in anticipation of a technical analysis indicator known as the death cross. For those unfamiliar, technical analysis is the art/science of reading charts and predicting price movements.

“Although I don’t typically place a lot of faith in technical analysis, analysts had predicted there was a possibility that bitcoin (and other cryptocurrencies) could go lower — creating new buying opportunities for investors.

“And as expected, bitcoin did go lower — nearly touching the lowest price of 2018.

“Although cryptocurrencies have since rebounded, I believe the current price still represents a great entry point for new investors and those looking to add to their positions.”

Yes, James has reassessed his position stated here on Monday, when he said it was time to hold off on new purchases. Now it’s time again to buy the dips. “Despite the naysayers, this past weekend’s rally indicates cryptocurrency’s strong staying power and ability to weather the continued volatility of the stock market.”

“One could say hemp is as American as apple pie,” says Ray Blanco.

“Hemp is a type of cannabis plant,” Ray explains. “It’s one of the oldest crops in existence.” And the fibrous plant has deep roots — excuse the pun — in America.

“It was once an important crop,” Ray goes on. “Even some of the Founding Fathers grew it.

“During Colonial times, you could… pay your taxes in hemp!”

[Friday fun facts: It is probably urban legend that the Declaration of Independence was written on hemp. The final document was engrossed on parchment, and the Library of Congress says Thomas Jefferson’s rough draft was likely written on paper made of flax or linen rags.

And while we’re on the subject, there’s no evidence Jefferson ever said, “Some of my finest hours have been spent on my back veranda, smoking hemp and observing as far as my eye can see.” Scholars haven’t found it anywhere in his writings; it’s yet another spurious Jefferson quotation in a long list of them.]

With its unbelievably sturdy fibers, hemp was used to make ropes, textiles and paper.

“In the 1930s, thanks to the invention of new agricultural and processing machinery, hemp was touted as a potential ‘billion-dollar crop’ that could be used in 25,000 products, create thousands of American jobs and reduce foreign imports,” Ray says.

Even Henry Ford got in on the action when he built a car with plastic panels reinforced with hemp, singing hemp’s praises as 10 times stronger than steel. To prove his point, he took a sledgehammer to the vehicle… 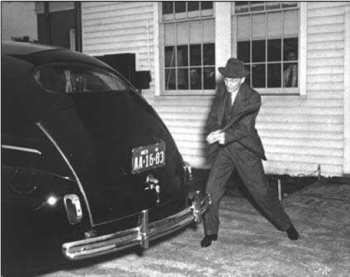 But hemp never lived up to its potential because it got swept up in Reefer Madness.

“Hemp got caught in the federal effort to ban cannabis,” Ray says, “despite the fact that hemp does not contain appreciable quantities of psychoactive THC.”

According to Gizmodo, “you’d need to smoke a hemp joint the size of a telephone pole to get high.” Heh.
The ban on hemp’s particularly wrongheaded when considering its main ingredient, CBD, has therapeutic applications for many illnesses. As it stands, CBD is legal in the U.S. but companies must import hemp to extract CBD.

“Moreover, it’s another step on the road to full cannabis legalization in the United States.”

Meanwhile, with full legalization in Canada less than three months away, the country’s cannabis industry has swelled in value to $19.6 billion.

That’s just the beginning, says research from Beacon Securities — which says annual sales could soon total $9.4 billion. (We’re using U.S. dollars as a point of reference, by the way.)

“Insiders have created a huge amount of wealth for themselves and even early investors,” PI Financial analyst Jason Zandberg tells Bloomberg. “It reminds me of back in the dot-com days. You always heard of a friend of a friend who got in early and got their company bought out.”

While the U.S. regulatory environment remains a bit unsettled, Ray Blanco has guided readers to several lucrative Canadian opportunities — delivering gains to date of 124% and 179%. (And you can buy shares over the counter; your brokerage account doesn’t need access to the Toronto Stock Exchange.) Yes, Ray says there’s more where that came from.

“I have to say that I’ve been having those same thoughts newbie readers gripe about,” a reader writes after yesterday’s mailbag, “but rather than complain and disrupt my emotional and mental state, I read what I can when I can anyway because it all is part of my pursuits.

“You guys keep up the great work. I will be a premium subscriber soon enough.”

The 5: Thank you kindly.

P.S. It all starts one week from today — a new earnings season, fueled by the corporate tax cut.

No matter what the broad market does, it could be one of the most lucrative opportunities this year — or any year — if you play it right.

That’s what Alan Knuckman wants to help you do. The 42 days of this coming earnings season could literally make your retirement.

As you might know, Alan is a fixture on financial TV — usually situated on the floor of the CBOE or the CME in Chicago — offering running commentary on the markets.

But recently he flew hundreds of miles to a studio for a multicamera shoot to discuss the staggering opportunity that’s only days away. Here’s a behind-the-scenes glimpse… 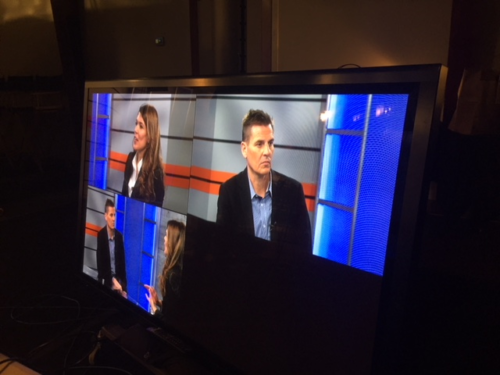 This is information he’s not sharing on CNBC or any other mainstream outlet — only with readers like you. The opportunity unfolding next week could turn a $10,000 stake into a $2.2 million fortune — in only 42 days. Click here so you won’t miss out.