“The Greatest Ponzi Scheme in History”

The Chinese government now owns the iconic Waldorf Astoria Hotel on Park Avenue… But it’s unlikely the Red Dragon had any intention to get into the hotel business.

The dubious acquisition comes as part of a too-big-to-fail government bailout of Anbang Insurance Group, a Chinese holding company founded in 2004 that sells insurance, financial and banking products.

“Anbang has over $310 billion in assets, over 35 million customers and operations in Asia, Europe and North America,” says Jim Rickards. “It is known for its huge customer base, high leverage and fast-paced deal-making.” Deal-making that included the high-profile purchase of the Waldorf Astoria for $2 billion in 2014. 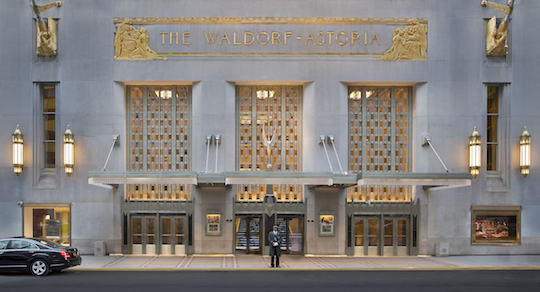 Property of the People’s Republic of China

But the insurance juggernaut grew too big, too fast and on Feb. 23, the Chinese government stepped in. “The China Insurance Regulatory Commission, a government financial regulator, took control of Anbang, installed new management and said they would manage Anbang for at least a year,” says Jim.

“An insurance version of a run on the bank was beginning,” Jim explains.

“Anbang thrived by selling customers a kind of life insurance called ‘universal life,’ which is more like a structured high-yield note than true insurance.” And banks throughout China peddled these policies.

“The problem with Anbang’s business model was that many of the universal life insurance policies had required payments in three–five years,” Jim says, “while its investments were illiquid long-term investments.

“The only way Anbang could meet its obligations was with bank loans or sales of new policies in a kind of Ponzi scheme where new customers’ funds were used to pay off the old promises.”

Anbang’s customer base saw the handwriting on the wall: A company with more debt than equity wouldn’t be able to pay out when their policies matured. They started demanding their money now. That’s when “the Chinese authorities moved in to bail out the policyholders and prevent an out-of-control financial panic.”

In the meantime, Jim says: “The Communists… may be able to keep the greatest Ponzi scheme in history afloat in China for another year or so.

“Let’s consider how this will play out.

“There are some real assets to show (their trains are the best in the world) and some growth, but not nearly enough to cover the liabilities.”

In order to scrape by, China will need its hard currency reserves — and it has plenty. But in addition, it will need to make it rain when it comes to printing yuan to pay off dollar-pegged debts.

“The policy issue for China, therefore, is when and how they go about the cleanup.”

Jim says: “If China moves too quickly, they risk slowing the economy.” And if too slowly,

“They risk an uncontrolled panic and a liquidity crisis.”

For now, the Chinese government is taking a “Goldilocks” approach, trying to get it just right.

“This Goldilocks plan has three parts:

“This all comes at a critical time in China,” says Jim, as the largest communist country in the world undergoes a fragile transition.

“The Communist Party Politburo has just announced they are repealing term limits on the president of China,” Jim says. “Currently, that office is limited to two five-year terms, but those are being eliminated. The incumbent, President Xi Jinping, will remain in office indefinitely.”

That will put “Big Xi” — as he’s called — in a class with Russia’s President Vladimir Putin and make him “the most powerful ruler in China since the death of Mao Zedong.” 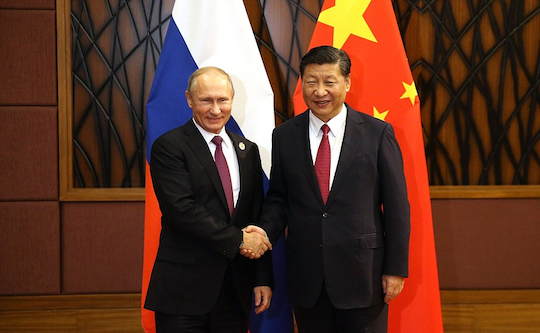 Plus, the politburo will be choosing a new head of the People’s Bank of China. The frontrunner? Harvard-educated economist — and Xi Jinping crony — Liu He, who, if selected, could serve as both vice premier and head of the central bank.

By maintaining the status quo — including a president in perpetuity — Jim questions: “Will China be able to pull off this Goldilocks approach to a potential credit crisis?”

Jim pulls no punches: “Of course not. Nobody’s that good or that lucky.

“Still, the Communists will try and may be able to keep the greatest Ponzi scheme in history afloat in China for another year or so.”

Despite China’s scrambling, in the end, the only alternatives will be “close the capital account, devalue the currency, nationalize the financial sector and put the malefactors in jail,” says Jim.

“This story is getting worse because U.S. President Donald Trump just launched an all-out trade war on China…”

Jim notes the crackdown on Chinese trade with “tariffs on certain appliances and solar panels and new tariffs in the works on steel and aluminum.

“Trump is considering other punishments aimed at China for its theft of U.S. intellectual property,” Jim continues, and “is also banning Chinese acquisitions of U.S. companies using national security powers through the Committee on Foreign Investment in the United States, CFIUS.”

“The result will be a financial meltdown of unprecedented magnitude in China with the potential to go global and cause a market collapse in Europe and the U.S. as well.

“China may soon resort to a combination of a debt cleanup and a maxi-devaluation of their currency to export the resulting deflation to the rest of the world.

“When that happens, possibly later this year in response to Trump’s new trade war with China, the effects will not be confined to China.”

If — and Jim says when — China devalues the yuan, it will be the “shot heard round the world as it was in August and December 2015 (both times, U.S. stocks fell over 10% in a matter of weeks).

“The trade and currency wars are far from over,” Jim says.

But for the moment, the trade-war freakout has reverted to a dull roar. The Dow is down as we write, but only about 35 points at 24,766.

Gold’s latest rally is losing steam. The bid on the Midas metal is down to $1,320.

“This combination accelerates our movement to deliver more value,” said Cigna’s CEO David Cordani at CNBC. “That’s the basic thing. We want to drive change. We’re not trying to protect an insurance franchise.”

According to CNBC: “Cigna’s deal with Express Scripts will combine a health insurer with a pharmacy benefit manager, which negotiates drug prices with manufacturers and administers prescription drug programs on behalf of health insurers, self-insured companies and government agencies.”

It remains to be seen how this health care trend — the industry calls it “vertical integration” — will benefit consumers.

The perfect storm unleashed on crypto yesterday — causing bitcoin to shed about $1,200 in minutes… The good news? The scrappy crypto righted itself — mostly — and brushed itself off.

Before we get started, let’s introduce Kamal Ravikant — best-selling author, entrepreneur and partner at Evolve VC, one of the most successful venture capital funds in Silicon Valley. Kamal also happens to be one of the foremost investors in cryptocurrencies and he’s agreed to come aboard exclusively as the chief crypto analyst at Altucher’s Crypto Trader.

Today Kamal sounds off on the convergence of events that led to the rapid plunge in the crypto market yesterday.

Event #1: “Japan announced it would take action against cryptocurrency exchanges that currently do not comply with the Financial Services Agency’s customer protection and anti-money laundering measures.”

Kamal says, “This is in response to Coincheck, a Japanese exchange, having about 500 million NEM tokens hacked recently. We think this move is a natural evolution in a Wild West scenario. It’s to be expected.”

Event #2: “The SEC just released a statement regarding potentially unlawful online digital currency trading platforms. The statement reaffirms that if investors want protection from the asset trading they are partaking in, they must use exchanges that are registered with the SEC.

“This is just the SEC doing their job,” responds Kamal, “and we’re all for it. It’s time for the shady cryptos to go.”

“Mt. Gox, an exchange that was hacked years ago, declared bankruptcy. This sale of $400 million in bitcoin mentioned in the report was done by the trustee as part of the bankruptcy,” Kamal explains. “And it was done over several months, not one day.”

Event #4: “Binance reported issues with users’ funds. Binance wasn’t hacked, but some users were — most likely through integrations with third-party apps for trading bots.

“This caused a lot of needless panic… In the meantime, this is a reminder to store the majority of your crypto on hardware wallets.”

Event #5: “The FinCEN (Financial Crimes Enforcement Network) published a letter on Tuesday that indicates it will apply its regulations to ICOs (initial coin offerings).

“As we’ve said before, crypto is like the Wild West,” says Kamal. “And this is good for cryptocurrencies as it puts pressure on shady ICOs.”

Bottom line? “With all the news hitting in the same period, all cryptos are down right now…For the time being,” Kamal continues, “while everyone is panicking, we recommend waiting until the panic cools off — and then scooping up cryptos at even deeper discounts.”

On Monday, we questioned how MoviePass could possibly make money when the company takes in about $8 million in revenue every month while spending $36 million on movie tickets for subscribers.

Hmm. We’re no mathematicians but…

Then MoviePass’ CEO Mitch Lowe was a keynote speaker at the Entertainment Finance Forum. His session was titled Data Is the New Oil: How Will MoviePass Monetize It?

Naked Security reports, “The industry audience — some of them subscribers themselves — laughed nervously, for good reason.

“Lowe continued, describing how beyond the demographic data, MoviePass’ mobile app gives it the ability to track subscribers via GPS.

“It can follow users as they leave home, on their trip to the movie theater and even beyond…”

As if that’s not creepy enough, Lowe went on to say all of the data are meant to “build a night at the movies.” For example, “MoviePass would advise subscribers on where to go out for dinner before or after a screening… and would take a cut from vendors,” says Naked Security.

The company spun out a damage-control statement:

“We are exploring utilizing location-based marketing as a way to help enhance the overall experience by creating more opportunities for our subscribers to enjoy all the various elements of a good movie night. We will not be selling the data that we gather. Rather, we will use it to better inform how to market potential customer benefits including discounts on transportation, coupons for nearby restaurants and other similar opportunities.”

In plain-speak (just like the CEO said): How can MoviePass monetize your data?

P.S. I have no idea what you’re doing with your retirement money… But if you’re serious about growing your wealth, you definitely don’t want to miss this interview with a multimillionaire investor.

Simply put, what he said on camera could change all your retirement plans… starting next week. You’ll understand why once you click here and see the rebroadcast… available only for a LIMITED time.