Scot Peterson is the reason we can’t have nice things.

Peterson, as you likely know by now, is the sheriff’s deputy assigned to the high school in Parkland, Florida, who stood by while a gunman mowed down 17 people. Oh, Peterson’s colleagues also tipped him off to the suspect’s threats to shoot up a school in 2016 — and he did zero follow-up.

OK, maybe Peterson’s not the reason we can’t have nice things… but his case is symptomatic of how many of us are getting hosed, financially, right now… and all of us will be whenever the next recession rolls around.

For his not-so-meritorious public service, Peterson has now “retired” from the sheriff’s office at age 54 — and will collect a handsome pension.

The South Florida Sun-Sentinel reports his base salary in 2016 was more than $75,000. Throw in longevity and “first-responder” bonuses and the police union says his nonovertime pay was closer to $80,000. Peterson’s pension will be 75% of the average of his highest-earning five years.

That’s typical for many state and local government workers. Some make out even better. In California, 21,862 retirees are pulling down annual payouts of six figures.

That’s according to a transparency organization called Open the Books. Put together, those retirees collect $2.8 billion a year from the California Public Employees’ Retirement System. CalPERS is the biggest pension fund in the country, with assets totaling $301 billion.

If those figures seem a little, well, unsustainable, you’re right.

CalPERS was in decent shape before the Panic of 2008 — with enough assets to cover all its future obligations. But the “Great Recession” demolished those sound finances. At its nadir, CalPERS had only 60% of the assets it needed for future payouts.

And now? Yes, we’ve had a roaring stock market for nine years… but interest rates on fixed-income investments have been next to nothing.

So the shortfall is still enormous, says Daniel Borenstein in the San Jose Mercury News. “Even after a banner year for the stock market, CalPERS, by its own calculation, ended 2017 with only about 71% of the assets it should have had to help pay for future pensions.” Unfunded liabilities total $140 billion.

How did we get here? In large part, pension managers got cocky.

Way back in 2010, we identified a phenomenon we labeled “the 8% illusion.” The managers of government pension plans made a fatal assumption: Because their returns over the previous 25 years averaged 8% a year, returns over the next 25 years were also likely to average 8% a year.

As of year-end 2016, many pension managers are still laboring under that illusion, judging by that bar on the far right… 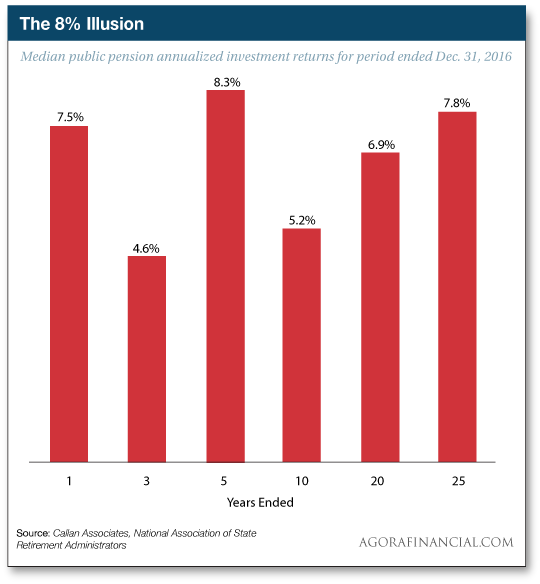 For its part, CalPERS has lowered its expectations — if only a little. In late 2016 we told you how the 8% illusion was being gradually dialed back to 7%.

“But that 7% forecast is problematic,” writes Mr. Borenstein. “Ted Eliopoulos, CalPERS chief investment officer, estimates CalPERS will only earn 6.1% annually over the next 10 years. To reach 7%, the system’s actuaries ‘blended’ the 10-year estimate with a projection for the subsequent 50 years of 8.3% annual returns.

“That’s right. CalPERS, like many retirement systems, makes decisions about funding pensions today based on estimates of what market returns will be for the next six decades.”

Key point: “When CalPERS funding falls short of the investment forecast, it’s up to the public agencies, and ultimately taxpayers, to make up the difference,” Borenstein says.

According to a groundbreaking 2011 study, it would cost the typical California household $1,994 per year for 30 years to fully fund state and local pensions.

Yes, California is worse than most. But every state is in the hole to one extent or another. Five states have it worse than the Golden State — Ohio, Wyoming, Oregon, New York and New Jersey.

Rising pension costs are a major reason cities and states are hitting up taxpayers allegedly to fund the rising cost of everyday services like fire protection and sewers. In many cases, however, the additional revenue goes to shore up underfunded pensions. And it’s still not enough.

Years ago, we predicted that eventually state and local pensions would be in such dire condition that the cry would go up for a federal bailout. Three months ago brought the first whispers.

True, this bailout wouldn’t be for government workers. Instead it would be for a certain type of private pension plan, so-called “multiemployer” pension funds. Most of these pensions are jointly administered by trustees for a labor union and multiple employers. As we related last summer, about 50 of them are in “critical and declining status.”

Enter a bailout proposal by two Ohio Democrats, Sen. Sherrod Brown and Rep. Tim Ryan. They want to allow these struggling pensions to — drumroll, please — borrow from the U.S. Treasury to remain solvent.

Exactly how would that work? We turn to Nomi Prins, a one-time managing director at Goldman Sachs who has since come around to “the light side of the Force,” if we can borrow Star Wars terminology. She’s now a truth-telling, best-selling author and editor of our premium advisory called Dark Money Millionaires.

“The funds proposed would come from financial institution loans and be collateralized by Treasury bonds,” Nomi explains. “This means that Wall Street banks, already subsidized by bailouts and easy money from the Fed, would get another perk from the interest from these loans. It also means that pension funds would be further leveraged, forcing them to either invest in riskier assets or have problems repaying the loans later.”

A bailout plan like this is a perfect example of what Nomi calls “Dark Money.”

“Dark Money basically means money coming from central banks,” she tells us. “In essence, central banks ‘print’ money or electronically fabricate money by buying bonds or stocks. They use other tools like adjusting interest rate policy and currency agreements with other central banks to pump liquidity into the financial system.

“That Dark Money goes to the biggest private banks and financial institutions first. From there, it spreads out in seemingly infinite directions, affecting different financial assets in different ways.

“These Dark Money flows stretch around the world according to a pattern of power, influence and, of course, wealth for select groups.

“Dark money is the No. 1 secret life force of today’s rigged financial markets,” Nomi adds. “It drives whole markets up and down. It’s the reason for today’s financial bubbles.”

Yes, it’s infuriating. But… “if you understand Dark Money and know where it’s flowing,” she says, “you’ll have information 99% of investors don’t have. You can find the opportunities to trade around the Dark Money flows that Wall Street thrives on.”

Nomi recently recorded a video explaining how you can do just that. But as you might well imagine, she’s angered a lot of people in powerful places. Just to keep the heat off her, we’ve agreed to take down the video as of midnight tonight. We urge you to watch it right now while you still can.

To the markets, where the new Federal Reserve chairman is taking the wind out of every major asset class.

Jerome Powell is testifying before Congress today for the first time since taking office earlier this month. The testimony is a snooze. He said the Fed’s outlook for the economy has improved since December, allowing for “further gradual increase in the federal funds rate.”

Powell left it ambiguous as to whether that means sticking with plans to raise the rate three times this year or stepping up the pace to four. At the moment, traders are leaning toward four and hitting the sell button on nearly everything…

We’re not sure whether it’s the prevailing winds of public opinion or some other factor… but “gun stocks” aren’t performing very well lately.

During the Obama administration, shares of gunmakers would frequently jump after a mass shooting — on the theory that gun enthusiasts would buy more firearms in anticipation of a federal crackdown.

That has not happened since the aforementioned Parkland shooting on Feb. 14. While the Dow is off about 3% for the month, Sturm Ruger (RGR) is down more than 10% and American Outdoor Brands (AOBC), maker of Smith & Wesson products, has sunk 23%. 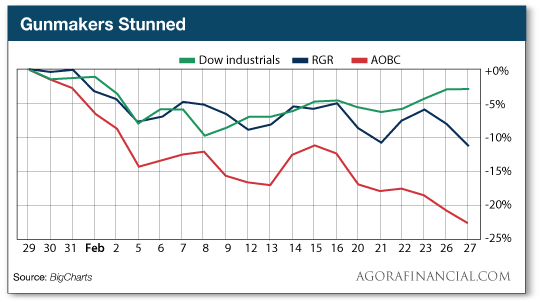 Perhaps it’s a sense that no legislation will be forthcoming this time. On the other hand, yesterday’s Wall Street Journal reported that the giant asset manager Blackstone is asking outside fund managers to disclose their ownership of companies that make or sell guns. The paper said the move “reflects the snowballing pressure on companies to cut ties with the firearms industry.”

And as far as legislation goes, we wouldn’t be so certain. This morning brings a news item that’s flown under the mainstream radar: Two Republican senators — Arizona’s Jeff Flake and Maine’s Susan Collins — have introduced legislation that would prohibit firearms sales to people on the federal “No Fly” list.

Significantly, Donald Trump said he favored such a measure while campaigning in 2016. That’s even though the FBI and Justice Department 1) add people to the list based on hunches, 2) don’t tell people why they were added to the list and 3) don’t give those people any path to appeal the decision.

The big economic number of the day is discouraging — durable goods orders sliding 3.7% during January. Oops, the average guess among dozens of economists polled by Bloomberg was a 2.0% drop.

“Durable goods” is a government designation for anything designed to last three years or longer — whether it’s a washing machine or a guided missile launcher. The number is notoriously noisy thanks to orders for aircraft and military gear — both of those categories can vary widely from month to month.

Back those out and you have something called “core capital goods” — a more steady and reliable measure of the manufacturing sector. Unfortunately, that number slipped 0.2% last month, while the “expert consensus” was looking for a 0.5% increase.

We’ve been saying for a few weeks now that the economy has entered the late-boom stage of the boom-bust cycle. But a few more numbers like this and the trajectory toward the next bust will be speeding up considerably…

Once again we see that any company jumping on the blockchain bandwagon can get an instant ramp in its stock price.

Now comes word that Atari — the video game company that fell on hard times 35 years ago — is introducing “Atari tokens.” Says CEO Frederic Chesnais, “Our aim is to take strategic positions with a limited cash risk, in order to best create value with the assets and the Atari brand.” What does that even mean?

No matter: Shares of Atari — which trade these days on the Paris exchange — jumped 60% after the announcement.

“I would be happy to proofread your work before you send it out,” a reader writes.

“You wrote: ‘Uncle Sam’s finances are even more parlous than you thought.’ Did you mean ‘perilous’?”

Thank you for your generous offer, but we’ll stick with the copy editing team we have already.

P.S. No matter what’s in your portfolio — stocks, bonds, ETFs, cryptocurrencies, all of those things or none — it’s urgent you watch this video now.

This is your final chance, because we’re pulling it offline tonight at midnight.