Welcome To the $80 Oil Party

“$70 oil could be just the start,” said the email we got from Alan Knuckman on Tuesday.

In the two days since we got that email, a barrel of West Texas Intermediate has climbed from $61.85 to $64.32 at last check.

From Alan’s lips to the establishment’s ears: $80 oil forecasts proliferate across the mainstream financial media this morning.

“Demand is going to continue to increase faster than supply,” Blackstone’s Byron Wien tells The Wall Street Journal to support his $80 outlook. “People are underestimating the expanding middle class in the developing world and their resultant demand.”

Citigroup, meanwhile, is pointing to the ever-present “geopolitical tensions” as a catalyst for $80 crude. If Donald Trump gets a wild hair (so to speak) about something or other in the Middle East, a sharp increase is all but inevitable, says a report out this week: “It is not a surprise that our list of potential wildcard events in the year ahead retains a focus on the United States.”

For Alan, the biggest driver for higher oil prices has little to do with global demand or beating war drums.

Instead, he’s pointing to Saudi Arabia’s plans to float publicly traded shares of the state-owned oil firm Saudi Aramco. Whether the shares traded in New York or London — that’s yet to be decided — it would be the biggest IPO ever.

“Saudi Arabia lost hundreds and hundreds of billions as crude prices have dropped in the last few years,” he tells us. “Oil prices will absolutely not fall before autumn, and then the kid-glove Saudis can cash in.”

And then there’s the price action. Check out this chart of oil going back the last five years… 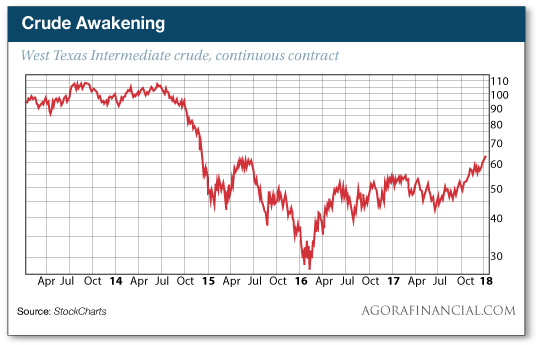 [Ed. note: With crude on the rise, Alan just urged his 42-Day Retirement Plan readers to cash in: Only a week ago, he recommended call options on the oil-services giant Halliburton. This morning, they’re up 52%.

Yes, there are more opportunities like that — just around the corner. Earnings season starts tomorrow, opening a lucrative 42-day window in which Alan says you can transform your retirement plans. Check it out right here, including Alan’s flawless track record since we launched this service three months ago. Again, you won’t have to sit through one of those “boring, long-winded presentations.]

The major U.S. stock indexes came out of the gate slowly this morning, but as we write they’re off to the races.

Trader chatter includes Warren Buffett’s decision to name two of his potential successors to the board of Berkshire Hathaway. Ajit Jain and Greg Abel are old hands at Berkshire and now will also take on the titles of vice chairman. (You don’t have to write in with any jokes about “Jain and Abel,” thank you.)

Police in South Korea — the No. 3 hub of global cryptocurrency activity — have raided the headquarters of two exchanges. It might well be a prelude to a shuttering of all exchanges in the country, but there are conflicting reports on that score.

Meanwhile the Chinese government has ordered the shutdown of several crypto mining operations; the authorities have had their fill of powerful mining computers mooching off China’s cheap subsidized electricity.

Again, the price of bitcoin looks mighty stable under the circumstances; it’s experienced harder falls for no reason at all.

The battle between inflation and deflation is heating up.

On the inflationary side, Walmart has just announced it will use some of its windfall from the new tax law to raise its starting wage to $11 an hour.

As you’re no doubt aware, wage growth has been elusive throughout the entire time of this weak “recovery” going back to 2009. The Federal Reserve has been keen to gin up higher inflation… but without rising wages to fuel a “wage-price spiral,” all that Fed funny money has been boosting asset prices more than consumer prices. Maybe the tide is turning now.

But on the other hand, the Labor Department is out this morning with its monthly read on producer prices — registering a 0.1% drop in December. Whoops, the “expert consensus” among dozens of economists polled by Bloomberg was looking for a 0.2% increase. Wholesale inflation is now in decline again after a recent rebound.

And now a first in the annals of marijuana legalization.

Yesterday the Vermont Senate passed a bill legalizing recreational use. The bill has already passed the House. Republican Gov. Phil Scott has indicated he’ll sign it. Vermont would be the first state to legalize recreational use via the legislature and not a referendum.

The law would take effect in July, although retail sales would not immediately follow; a commission still has to figure out how to tax and regulate those sales. Vermont politicos seem unconcerned with U.S. Attorney General Jeff Sessions’ decision last week to give federal prosecutors more discretion in pursuing pot cases.

Meanwhile, our penny pot stock maven Ray Blanco’s enthusiasm hasn’t waned for a company that expects to cash in on a “green rush” in a town that was once a leading force in the California Gold Rush. It’s a remarkable — and potentially lucrative — story, told here.

You probably remember Subway’s ad campaign and annoying jingle. (The 5 apologizes for bringing up that particular ditty… it’ll be stuck in your head all day.)

If you have a really good memory, you’ll recall two years ago when we chronicled the chain surrendering to rising costs and going with $6 footlongs two years ago.

Now Subway is reviving the campaign — at least short term — with a $4.99 promotion. Sales have been slowing. Gotta get that foot traffic through the door somehow.

“But the special deal won’t fly at one Subway restaurant in Seattle,” according to Reason, “where owner David Jones posted a sign this week giving customers the bad news. 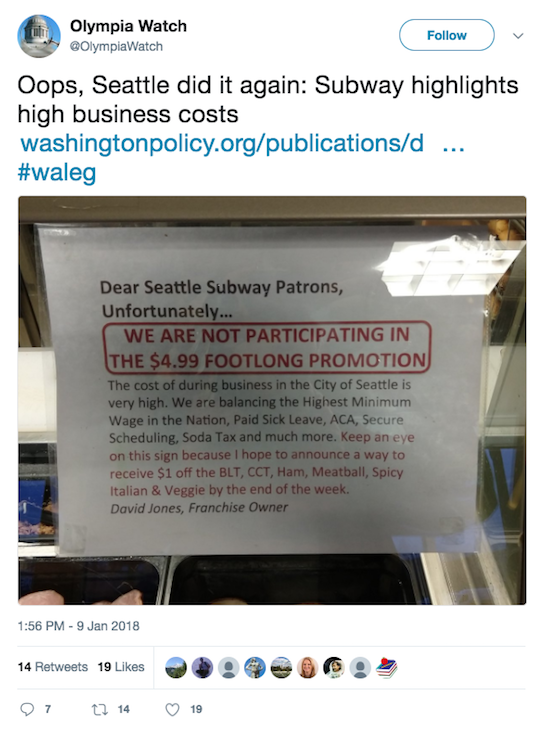 “Sadly, the consequences of high minimum wages, excessive taxation and mandate-happy public policy are not limited to the death of cheap sandwiches…

Unintended consequences abound: Per a study at the University of Washington, since 2016 the number of hours worked in low-wage jobs decreased by 9% while hourly wages increased only 3%. The outcome? The “‘higher’ minimum wage actually lowered low-wage workers’ earnings by an average of $125 a month.”

While Seattle bureaucrats might have good intentions (and you know what they say about good intentions), if “the cost of doing business continues to climb, workers will be hurt, not helped.”

The cost of a sandwich in Seattle is just the tip of the iceberg….

“Tell Senate Majority Leader Mitch McConnell Social Security is not an ‘entitlement.’ It’s hard-earned money the government has stolen from every paycheck I and everyone in my age group has ever received.”

The 5: Yeah, we’ll get that to him right away. We have him on speed dial.

Seriously, though, we get it. It never has made sense to put Social Security and Medicare — systems that people pay into long before they use it — with Medicaid, which is more of a straight-up welfare program.

But lumping them all in together is a nifty way the power elite can turn people against each other. Divide and rule, baby…

“That is an awesome comment. I’ll try to remember that for future use,” a reader writes after a quip of ours on Tuesday…

“Whatever. The toothpaste is not only not back in the tube, it’s still smeared all over the bathroom sink…”

Honestly, we weren’t sure whether to run with that, but we’re glad someone appreciated it.

“I agree totally with the blowback from your recent commentators,” a reader writes. “You are insulting your readers.

“Well, that may exaggerate just a hair… but not much! Yeah, we know, you ‘have to pay the bills,’ and so do the mega-banks! So please, just stop sending this junk to me! Anything worthwhile in The 5 has long since been occluded by it.

“P.S. Might as well print this while you’re being so forthright about your reader opinions.”

The 5: Ah, so you’re enough of a long-term reader that you’re familiar with the running joke about “I dare you to print this.”

But we’re compelled to ask: What are we doing different now that we haven’t before?

Maybe I’m a little too close to the question to answer it objectively. I had a small hand in this e-letter from its debut in 2007, and I’ve selected the content daily since 2010. So if you’ve been reading this for longer than, say, five years, tell us — how much have we really changed?

P.S. Earnings season starts tomorrow… and so does a 42-day window that can make a dramatic difference to your portfolio.

At the start of the previous earnings season last October, we launched the 42-Day Retirement Plan — an Alan Knuckman trading service that aims to make the most of those six weeks every quarter when most companies report their numbers.

The 42-Day Retirement Plan is the first newsletter that paid for itself within the first month!” says a satisfied reader. “Clear trade outlines, rationale and advice… I made over $2k on one trade.”

Again, earnings season starts tomorrow. You can make 2018 your best year financially ever. And it starts right here.