How You’ll Know When Bitcoin’s In a Bubble

OK, now we can remove the asterisk from the headlines about $10,000 bitcoin.

On Monday, the price crested five figures on a handful of cryptocurrency exchanges. But it wasn’t till last night that the barrier was definitively broken.

Of course, the establishment media was quick to throw cold water on the milestone. Here’s Bloomberg’s alert as it appeared on your editor’s iPad…

Heh. Here’s a rule of thumb when you’re not sure whether an asset has reached bubble territory: If mainstream news sources tell you it’s a bubble… it’s not a bubble yet.

That’s how it worked in the dot-com crash. Tech stocks climbed the proverbial “wall of worry” for much of the 1990s, with a healthy dollop of mainstream skepticism the whole time. With every pullback along the way — in the third quarter of 1998, the Nasdaq tumbled 25% from 2,000 to 1,500 — we were told the mania had run its course.

In fact, the mania had only just begun. From 1,500 in October 1998, the Nasdaq more than tripled — racing past 5,000 in March 2000. It was during this 18-month span that the mainstream cast aside all common sense, convinced that only fuddy-duddies still paid attention to numbers like, you know, sales and profits. Now it was “clicks” and “eyeballs” that mattered.

From where we sit, bitcoin is still climbing that wall of worry.

It took a 30% spill in September after the Chinese authorities cracked down on cryptocurrencies… and then it raced to new highs.

It took another 30% spill earlier this month as traders digested the news that plans for a “bitcoin fork” had been abandoned… and then it raced to new highs.

Back on Oct. 10, James Altucher said in this space, “Long-term investors can take advantage of potential price volatility to invest in bitcoin.” On that day, it was trading for $4,807. We’re not sure whether doubling your money in 51 days qualifies as “long term”… but if you followed James’ guidance, you probably don’t much care.

If you didn’t follow James’ guidance, what should you do now?

As we go to virtual press, James is sharing his latest cryptocurrency thoughts on CNBC. But there’s something he’s holding back from mainstream audiences. Because you’re a paying reader of an Agora Financial publication, you’re privy to a subscriber-only exclusive briefing. [Hint: It’s still early days for bitcoin.] Click here to watch.

To the more conventional markets… where blue chips are still on a tear, but tech shares are stumbling.

The Dow leaped 1% by day’s end yesterday… and it’s up another third of a percent as we write today. The Big Board is now less than 90 points away from the 24,000 mark.

But the tech-heavy Nasdaq is down 1%. Amazon is down 3% for no obvious reason; it might just be profit-taking after a monster run of several days going into “Cyber Monday.”

Gold’s latest sprint toward the $1,300 level has yet again been dealt a setback; the bid is now $1,284. Treasuries are looking a little punk as well, the yield on a 10-year note now 2.39%. So much for the “safety trade” after the latest North Korean missile launch.

Crude is back above $58 this morning. Although it’s down a bit from its highs Friday and Monday, it’s up 37% in less than six months.

It’s also hovering near a level last seen in mid-2015 — a fact that adds a little oomph to the significance of the next big OPEC meeting: Tomorrow the oil ministers from the OPEC nations hold their every-six-months gathering in Vienna.

Big things — and sometimes strange things — tend to happen at the November OPEC meetings. In 2014, the ministers decided against production cuts even though oil prices were in a freefall. That particular meeting was scheduled for Thanksgiving Day; crude prices tumbled 10% within hours amid ultra-thin liquidity in the commodity markets because U.S.-based traders had the day off.

At the meeting a year ago, OPEC ministers finally came to terms on production cuts… and they convinced non-OPEC member Russia to buy in.

In the 46 years since President Nixon cut the dollar’s last tie to gold… every recession has been preceded by and/or accompanied by a meaningful jump in oil prices. It’s like bread and butter…

“At $140, a lot of things in this world just don’t work anymore,” our Byron King said at the time here in The 5. Sure, there was the housing bubble… and the banks were taking crazy risks they never should have. But historic crude prices surely gave the economy that final push over the cliff.

It’s the earlier episode leading up to the recession of 2001 that might be most analogous to the present day.

Crude bottomed at $11 a barrel in late 1998 — around Thanksgiving time, come to think about it. (Saudi Arabian leaders held a series of, umm, interesting meetings that year with U.S. oil executives, Vice President Al Gore, Energy Secretary Bill Richardson and for good measure, the Bush family’s inner circle — but that’s a story for another time.)

From there, it tripled in the following two years — reaching $34 by late 2000. The dot-com bubble had already burst by that time. A mild, brief recession followed starting in March 2001. There’s only so much pressure the U.S. economy can withstand from a big jump in oil prices.

It’s already more than doubled since then. If oil were to climb another $15–20 by next spring — not implausible given the jump since June and accelerating global demand — we’d be looking at a very similar scenario as happened at the turn of the 21st century. That is, a tripling of the oil price in a two-year span… teeing up a delayed-onset recession a few months later.

Recognizing that history doesn’t repeat precisely, but it does rhyme… that would put us into recession by next summer or fall.

No guarantees. We’re just engaging in a thought experiment. But it’s something to keep in the back of your mind in the wake of whatever headlines come out of OPEC tomorrow.

In the meantime, the global economy is still in the boom that comes before the inevitable bust — witness the crazy auction price for Welsh gold.

Welsh gold, as the name implies, is a type of gold that comes from Wales. Wikipedia says it’s “highly prized because of its origin and scarcity.” It’s Welsh gold that’s gone into the wedding rings of the British royal family ever since the late Queen Mum’s marriage in 1923. It’s such a tradition that both of Prince Charles’ wives had wedding rings made from Welsh gold!

“We certainly haven’t had Welsh gold in before and I’ve been auctioneering for 57 years,” auctioneer David Rogers-Jones tells the BBC. There were 10 lots of nuggets and flakes up for bids this week, all of it mined under government lease between 1979 and 1981… 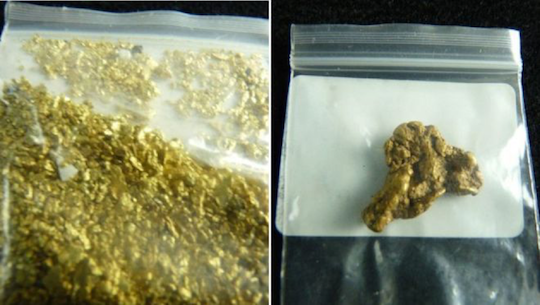 “Out of curiosity,” a reader writes after we took note of the interest and dividend income reaped by the campaign fund of Sen. John Thune (R-South Dakota)… “let’s say Sen. Thune was to retire… What happens to the money in the ‘Friends of John Thune’ fund?”

“I cannot imagine it gets returned to donors (that would seem to be a logistical nightmare). Does Sen. Thune (or a designee?) direct the funds to other candidates or policy issues as he sees fit? Is he able to use some or all of those funds for personal use/needs?

“What are the laws around residual campaign fund balances?”

The 5: Well, he can’t use the funds for a lake house, a new Beemer or his kids’ college tuition. Doesn’t work that way.

Beyond that, however, the options are many. He could donate to charity… or annually contribute $2,000 to another candidate’s campaign, or $5,000 to a political action committee.

Or Thune could simply leave the account alone… indefinitely. Particularly appealing if he ever wanted to pull a Michael Jordan and hit the campaign trail again.

Here’s something else to consider: Should the senator decide to take a permanent vacation from politics, he’d likely get a serious guilt trip from the Republican National Committee. The law allows candidates to transfer any or all their leftover campaign funds to national party committees… and in Thune’s case, that’s a lotta Benjamins.

According to Paul Ryan at the Campaign Legal Center (not that Paul Ryan), “The overarching rule is that it [campaign money] can’t be converted to personal use, but that it can be used for any other lawful purpose.”

“While phage technology sounds really promising,” a reader writes after yesterday’s 5, “it should also be noted that bacteria can also develop resistance to phages, maybe even faster than antibiotics.

“Sadly, this is not likely the silver bullet we could hope for.”

The 5: Anything helps, even if only in the short term.

But it’s true, the arms race science is waging against bacteria is a losing battle as long as Big Agra keeps lacing animal feed with antibiotics. The tide might be turning; a year or so ago, Tyson Foods announced it would no longer use chickens raised on antibiotics in its poultry products.

On the topic of what price bitcoin trades for — and the asterisk we put next to $10,000 yesterday — a reader writes: “First thing yesterday morning I looked at CoinMarketCap and saw bitcoin at $10,070.60. What do you use?

“I’m sure that there are other places that list these prices, but does the price really vary much between one and another?

“Sometimes I notice small differences in names and (ticker) symbols between various exchanges and wallets. This seems a bit scary to me, since mistakes could be quite expensive and there is not much you could do about it. Maybe we need a standards committee for cryptocurrencies and a trusted source for information!

The 5: Maybe Weird Al Yankovic can do a contemporary version of that classic song by Chicago…

As I was walking down the street one day,

A man came up to me and asked me the bitcoin price that was on my phone, yeah.

“Does anybody really know what the bitcoin price is…”

That said, we suspect some standardization is coming once bitcoin futures and options start trading in a few weeks…

P.S. Go figure: At 8:52 a.m., CNBC issues an alert citing the Dow Jones newswires: “William Dudley, president and CEO of the Federal Reserve Bank of New York, said at a conference Wednesday that the Fed is exploring the idea of its own digital currency.”

These are pivotal times in the cryptocurrency world. That’s why James Altucher — Agora Financial contributor and one of America’s top “crypto millionaires” — just recorded an urgent video update for readers like you.

What he has to say just might make your jaw drop. We urge you to give it a look right away.