Where Big Money Is Moving Now

Amazon’s acquisition of Whole Foods, noted in this space on Friday, remains the talk of the Street. But that all-time high held for only a picosecond; at last check it’s back below $1,000 a share. Barring something dramatic, AMZN will end the day below its all-time close reached earlier this month.

So it goes with the rest of the hot tech stocks that have propped up rest of the market for the last two years. Ten days ago, Goldman Sachs issued a report declaring the “Big 5” stocks in the S&P 500 — in order of market cap, they’re Apple, Alphabet (Google), Microsoft, Amazon and Facebook — to be overvalued. That triggered an instant wave of selling.

And while the Big 5 had a couple of good days last week, they remain below the lofty levels they held earlier this month. Even Amazon, despite that healthy organic glow from the Whole Foods beauty aisle… 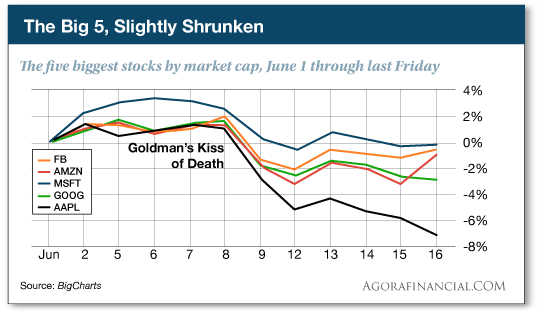 “Whenever investors pull money out of one area of the market (causing prices to drop), that capital is usually reinvested in another area,” says our income specialist Zach Scheidt.

“Dividend stocks are starting to get the attention that they deserve,” says Zach.

“After nearly a year of underperformance, dividend stocks are starting to accelerate.”

That was happening even before the Big 5 fell out of bed. Check out this chart through the end of May plotting the relative performance of dividend stocks to the whole S&P 500. 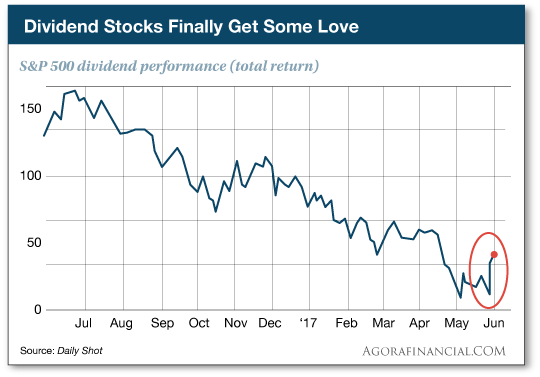 It’s not that the dividend stocks Zach favors have been losing money over the last year; rather, their slow-and-steady performance has been outdone by the S&P 500 as a whole. But again, that’s mostly because of the Big 5’s outperformance.

“Now that these speculative stocks are starting to pull back,” says Zach, “dividend stocks are getting their day in the sun. And I expect this trend to continue for the rest of the year (and probably well into next year).

“After all, the level of uncertainty in the market continues to be high (and dividend stocks are a great place of safety in uncertain times). Interest rates continue to be very low, making dividend stocks one of the best ways to generate income. And our dividend companies are growing, generating larger profits, which in turn fuel larger dividend payments.”

Note well: Zach says one of the Big 5 stocks is not like the others.

It happens to be the one that’s taken the biggest hit since that Goldman report 10 days ago — Apple (AAPL). Which Zach says only makes it more of a bargain.

“Shares of Apple are not at all expensive compared with the earnings that the company generates,” he tells us.

No doubt. After this recent pullback, Apple sports a price-earnings ratio this morning of 17. Compare that with Alphabet, Microsoft and Facebook — all in the 30s. To say nothing of Amazon, with a P/E of 189!

“Apple has roughly $200 billion in cash that could be paid to investors through dividends,” Zach says. (You’ll just have to imagine him pounding the table.)

“I expect that cash to be paid soon, as Trump’s corporate tax plan will strongly encourage international companies like Apple to bring cash back to the U.S. The stock only pays a 1.7% dividend yield, but that should improve quickly once new tax legislation is passed and Apple’s $200 billion in cash is distributed to investors.”

[Ed. note: Slow-and-steady dividend stocks ultimately win the race. But if it’s instant income you’re after, and you have at least $20,000 to invest, then you’re in position to pull in up to $2,000 a month.

Zach’s “perpetual income strategy” is a technique our publisher Joe Schriefer has used in his own portfolio for years. He’s so eager to tell you about it, he recently conducted a bold experiment on video. We encourage you to see it for yourself.]

There is absolutely no news driving the tech bounce… and as noted above those Big 5 names remain below their levels of earlier this month. Doesn’t feel as if this rally has a lot of staying power.

But in the meantime, hot money flowing into stocks is flowing out of both Treasuries and gold. A 10-year T-note yields 2.18%. The bid on gold has slipped below $1,250. (As mentioned last week, we’ll worry about gold if it tumbles below $1,218.)

Crude rallied from its year-to-date lows on Friday, but it’s backsliding today; at last check a barrel of West Texas Intermediate is $44.57.

I’ve been rethinking the similarities between trading stocks and betting in Las Vegas,” says Jonas Elmerraji — back from a recent trip to Sin City.

For a long time Jonas chafed at the comparison. “It really annoyed me,” he says, “when people likened trading to gambling or called the stock market ‘the casino’ — after all, what we do as traders is totally different than playing the roulette wheel.”

The old saw about how “the house always wins” doesn’t hold true, he tells us: “You may have heard of the MIT Blackjack Team. The book Bringing Down the House was written about them. They made a movie about it too. The team used card counting to gain a statistical advantage over the casinos, making profitable runs every single year.

“It’s estimated that counting cards gives you about a 1% edge over the house. It’s small, but in the long run, it can add up to a fortune. To combat card counters, casinos make things more complicated. They add more decks, making it harder to keep up the count.

“Of course, technology changes everything. For a computer, more decks aren’t a problem. If you could bring a computer to the blackjack table with you, you’d beat the pants off the casino. (That’s why the iPhone Card Counter app is illegal to use in a casino here in Nevada.)”

Here’s the point: Jonas ventures that his proprietary computer-driven “Kinetic Composite” is analogous to card counting in Vegas. As we said last week, using the Kinetic Composite gives you a shot at outperforming the S&P 500 by 24% every year. And the strategy can be applied to individual stocks for even bigger wins.

“If people want to compare the stock market to the casino, that’s fine. I get it,” Jonas concludes. “But we’re the card counters.” Watch this space as the week goes on to learn how you can unlock the Kinetic Composite’s power…

The budget stalemate in Illinois — now two years old — has gotten so bad that the Prairie State will soon be shut out of the Powerball and Mega Millions multistate lotteries.

Way back in autumn 2015, we were chronicling how Illinois was issuing IOUs to lottery winners who’d won prizes over $600. Eventually, the governor and the legislature came up with a workaround, but the state still has no budget. “We’re like a banana republic,” complains Gov. Bruce Rauner.

Now the managers of the two big multistate lottery systems have served notice: Unless a budget is in place by the end of this month, Illinois will have to suspend Powerball and Mega Millions sales “until further notice,” per the Illinois Lottery website.

Rumors are swirling that Illinois might soon be the first state to file for bankruptcy — too many years of overpromising pension benefits, and no legislative solution in sight. Thing is, there’s no provision in federal law for a state to declare bankruptcy; Congress would have to act first.

That ought to be an amusing spectacle. We can hardly wait to watch D.C. politicos get all high and mighty, telling Illinois to get with the “fiscal responsibility” program. Pot, meet kettle…

“Why,” a reader writes after Friday’s episode, “do the same people who pander to the Cuban refugee community in Florida by demanding sanctions to punish this (gasp!) communist regime because of its human rights record rush to Vietnam to sign business deals?

“Did the Cuban government kill 58,000 Americans? Has Vietnam abandoned communism and embraced human rights? What’s seriously wrong with this picture?”

The 5: “Human rights” is a cudgel wielded only over regimes of which Washington disapproves. Saudi Arabia beheads people for sorcery, and the Beltway class — the current president included — couldn’t care less.

As for Vietnam, it doesn’t get along especially well with China — they even fought a brief war in 1979 — so our brilliant “strategic thinkers” are keen to use Vietnam as a counterweight to the Middle Kingdom. We’re sure it’ll work out splendidly…

“This doesn’t make sense to me,” a reader writes of the strange doings with the Texas Bullion Depository.

“Unless the University of Texas/Texas A&M endowment is planning to ‘rent’ their gold as HSBC, et al. do, it is privately owned. There is no reason why the depository would have to be a Comex member. Would you or I have to be members to hold our own private gold? Something stinks.

“There is, of course, the possibility that their gold is not even there, for one reason or another.”

“If you put a vote to the Texas people,” writes another, “they would say screw the Comex and bring the gold home.

“Texans are big boys — they could create their own exchange and own rules. Since when in today’s world does New York or Chicago have a lock on trading platforms and exchanges? They can trade gold in Texas just like they trade wheat in Kansas City.

“If Texas eventually wants to secede from the union, which may come about someday, they will be glad they brought the gold home.

“So now we see that even in the Great State of Texas it is politics as usual.”

“I don’t get it!” a reader writes in reply to some of the complaints that came in last week.

“How can someone pony up the requisite hundreds or thousands for your premium services but not have a clue what they are actually getting? Being a newbie is no excuse. They should have learned all the way back in grammar school the difference between ‘monthly’ and ‘daily.’ It’s common sense! Daily = Every weekday at least. Monthly = Once a month.

“These must be the same people you see on Facebook that form a complete opinion either in favor of or against something based on just the headline without ever reading the article and then go on a rant about it.”

The 5: It might come as a revelation to some of these critics who are only now getting acquainted with us… but we really do want happy long-term customers rather than a quick buck.

On the other hand, trying to please everyone is a surefire way to go broke…

P.S. Did you play it? In less than two months, readers of Jim Rickards’ Currency Wars Alert bagged a 34% gain on the Canadian dollar — they were urged to cash out this morning — and they didn’t play the risky forex markets to pull it off, either.

All they did was follow a one-of-a-kind strategy to “skim” the currency markets. You can do it too. Learn how at this link.