A Bigger High From Marijuana Investing

Allow us to be the first to wish you Happy Valentine’s Day — California style. 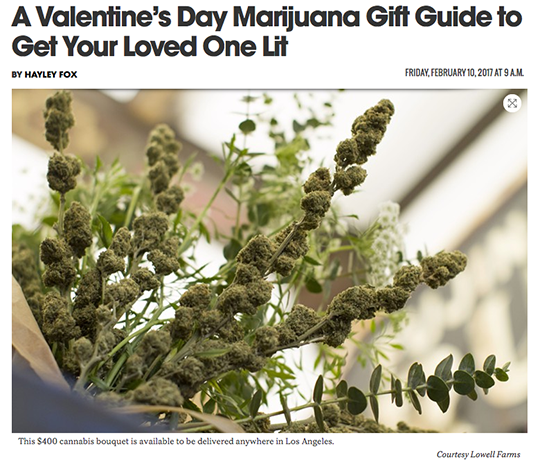 That’s a $400 cannabis bouquet there — among a handful of gift ideas suggested by LA Weekly.

This year, Californians still need a doctor’s note to acquire such goods; for now it’s only medical marijuana that’s legal in the Golden State. But under Proposition 64, the recreational-marijuana measure approved by voters last fall, that won’t be the case by next Valentine’s Day.

In two states where recreational weed is already legal, sales are crossing the $1 billion milestone.

Last week, the Colorado Department of Revenue reported $1.3 billion in revenue generated by marijuana producers and retailers during 2016.

And in Washington state, the Liquor and Cannabis Board — yes, that’s what it’s called — says retailers have sold $984 million in goods so far during fiscal 2017. The fiscal year runs from June to June — so the Evergreen State will easily top the $1 billion mark as well.

Colorado and Washington were the first two states where voters approved recreational marijuana. They’ve since been joined by Oregon, Alaska and the District of Columbia.

The next wave is Massachusetts, Maine, Nevada and the big prize — California, home to nearly one in every eight Americans.

Little wonder that Arcview Market Research — the go-to source of information about this “budding” industry — says the legal marijuana biz will zoom from $7 billion in sales last year to $21 billion by 2021. That’s a tripling in five years — a faster pace of growth than the dot-com stocks saw in the late 1990s.

A triple in five years is nice… but as with the dot-com boom, the potential within individual “penny pot stocks” is much greater.

We’ve been talking up those stocks for the last eight months or so — after years of skepticism about the sector, we hasten to add. So far, the recommendations Ray Blanco has made in Technology Profits Confidential are the sort of safe bets you can make for solid long-term gains over the next five years.

Along the way, however, he became frustrated. Pot is a hugely volatile sector. Ray had to steer clear of many names because of the wild swings they can take from week to week.

But he also realized within that volatility lies opportunity. So he joined forces with other members of our research team. Together they’ve developed a way to systematically trade in and out of these volatile stocks — capturing massive upside while avoiding the downside.

We’re talking about the possibility of taking a $500 grubstake… and turning it into $12,000 in only 33 days. And that’s only the beginning. The system aims to achieve those kinds of returns over and over.

Today we take the wraps off this system. Using something Ray calls “Penny Pot Flashes,” you can start capturing these massive and near-instantaneous gains for yourself. Click here and Ray will walk you through how they work with plain and simple charts — and no long video to watch.

To the markets, where — God help us — traders are hanging on every word of Federal Reserve chair Janet Yellen.

It’s time for her twice-a-year testimony to Congress. We’ll spare you the suspense: An interest rate increase next month is still on the table. It would be “unwise” to wait too long before pulling the trigger, she says. But if you’ve been reading us regularly, you’ve known that for weeks.

This morning’s big economic number bolsters her case: It shows another whiff of accelerating inflation.

Producer prices jumped 0.6% in January, double what the “expert consensus” was counting on. Rising energy prices had an outsized influence… but even if you factor out energy and food, the increase is still substantial.

Tomorrow we’ll see if these increases followed through to the retail level when we get the consumer price index. Yes, the number is largely bogus… but there’s still potentially useful information in the underlying trend.

The dollar has firmed a bit, but gold is holding its own despite that — the bid $1,226 at last check. Treasury yields are moving back up, the 10-year knocking on the door of 2.5%.

“Small-business owners like what they see so far from Washington,” says Juanita Duggan, president of the National Federation of Independent Business.

Indeed: The NFIB is out this morning with its monthly Small Business Optimism Index. After leaping to a 12-year high in November and December, it crept still higher in January… 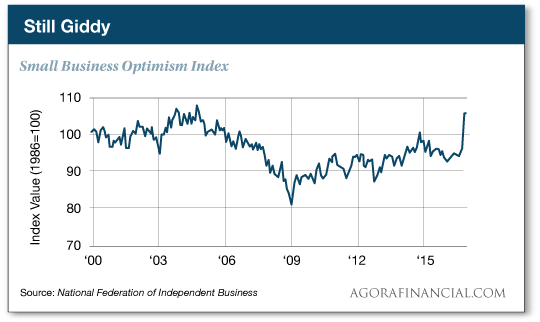 “We’ve had very low growth for years, mainly because small businesses have been tied down by regulations, taxes and spiraling health insurance costs,” Ms. Duggan goes on. “Now they can see relief on the horizon, and they are much more optimistic about the future.”

Bigger businesses are already sniffing out this small-business optimism.

Admittedly, it’s anecdotal evidence… but this morning, your editor heard a commercial on a small-town radio station for an outfit selling steel buildings. Opening line: “Are you ready for the economic boom? Don’t get left behind!”

This is a national company strategically buying radio time in a county Trump carried roughly 55-40.

And even if the Trump agenda isn’t derailed… the China “maxi-devaluation” remains a threat. This morning, there are new developments.

The Wall Street Journal says Team Trump is backing away from its threat to label China a “currency manipulator” in favor of a different arrangement: “Under the plan, the commerce secretary would designate the practice of currency manipulation as an unfair [export] subsidy when employed by any country, instead of singling out China.”

But that’s problematic too. It might violate World Trade Organization rules. In addition, “Other countries are also sure to take similar measures against U.S. exports and could argue that Federal Reserve policies that weaken the dollar qualify as subsidies.”

Heh… We’re in the middle of a global currency war that began in 2010, as Jim Rickards would remind us. At one time or another, everyone is trying to undercut everyone else by cheapening their currency. So yeah, this policy has a big chance of snowballing in a way the Trump administration wouldn’t like.

Besides, would the arrangement be any different from the viewpoint of Chinese leaders? Especially if it meant tariffs on Chinese exports to the United States?

Right now Chinese leaders are moving heaven and Earth to prop up the yuan, even at the cost of draining their foreign exchange reserves. “Once the Chinese realize that they will not be rewarded by the U.S. for trying to prop up their currency,” says Jim Rickards, “they may just let it crash to reap the benefits of even cheaper export prices to offset the U.S. tariffs.

“We’ve seen this movie before. It happened in the 1930s. It was called the Great Depression.”

Americans are slouches when it comes to transacting in the “shadow economy.”

That’s the term policy wonks use these days for what used to be called the black market — transactions that take place in such a way that government can’t tax or regulate them. It could be a drug deal… or it could be a cash payment for someone who cleans your gutters and doesn’t report the income.

Researchers at the University of Tuebingen, in Germany, recently tried to get a handle on the shadow economy’s size relative to GDP in 12 developed countries. Obviously, it’s an inexact science because there aren’t written records for many of these transactions.

But with that proviso, here’s how everyone fares. The Greeks and Italians — notorious for dodging the tax man — come out on top. America is dead last… 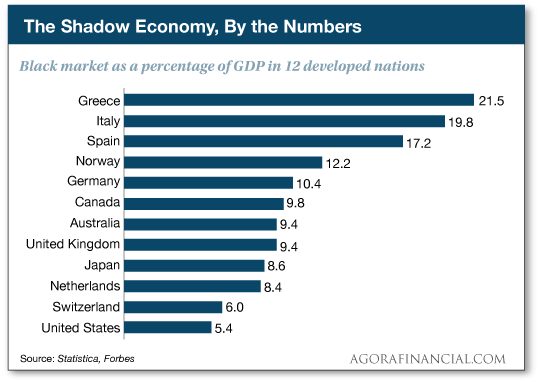 “You may be tempted to take that as a dispiriting signal that we’ve lost that insubordinate American spirit,” writes Jesse Walker at Reason; “I prefer to see it as a promising sign that our Leviathan doesn’t drive as much peaceful trade underground.”

Hmmm…. What do you think? Does America have a (relatively) better rule of law, or is everyone just fat, dumb and happy?

“Thanks for being honest about the novel gold idea,” a reader writes — “that you need $20,000 to get to play at the table.

“I have seen this advertised by several newsletters, and I suspected you need more than a brokerage account… You need money in that account!”

The 5: You’re welcome. Not all our services are cut out for everyone. Sounds as if you might still need to work on getting gold up to 10% of your investment assets, as Jim Rickards recommends.

By the way, we’ve closed off access for now to that “novel gold idea” we’ve played up in recent days… but if you do have $20,000 in capital to work with, you should know the technique works wonders in other asset classes besides gold. Follow this link for proof.

“Trump ran on helping the ‘forgotten folks,’” a reader writes after our latest war on cash musings yesterday.

“At least while he’s alive, we ain’t goin’ cashless in the U.S.; maybe much later, but not for the next four years!”

The 5: Are you saying he’s going to kick the bucket after exactly four years?

Yeah, we get what you’re saying. But don’t discount the possibility of “Deep State” actors subverting the Trump agenda. It seems highly likely they succeeded in taking out his national security adviser after only 24 days on the job — to say nothing of rekindling the ridiculous media obsession with Russia.

“Mr. Trump ran his campaign partly on the promise to ‘drain the swamp’ in Washington,” writes our final correspondent.

“Swamp critters are those who become powerful and/or rich by using the government laws, rules and regulations that most of us don’t understand well, if at all. Mr. Trump has certainly done that, revealing his true nature, and he has now entrenched more of his cohorts in various departments. It is to be expected that one of his first actions would be to issue more rules and regulations, and he has certainly done that. He may not have expected the outcry that would follow, but he will almost certainly issue more controlling rules as a result.

“The American Revolution brought about a relatively minimal government, but it has been steadily becoming more powerful and controlling of its citizens ever since, especially during wars or economic crises. How much will people take before revolting again?”

The 5: That’s the calculus of rulers everywhere — how long can they retain the consent of the governed?

Yes, there were the airport protests in late January. But aside from those, we suspect Team Trump isn’t especially worried right now. For the most part, the self-styled “Resistance” confines their acts of civic dissent to watching Saturday Night Live….

We’ve been onto the marijuana investing story since early last summer… and now we’re taking it to the next level.

Our team has perfected a system identifying “Penny Pot Flashes” that can send individual pot stocks 10 or 20 times higher… in a matter of weeks. And we’re taking the wraps off that system today. Follow this link and be among the first to know.